Porous silica nanosphere is one of the conventional and common form of silica nanomaterials in the field of nanotechnology. Most common nanopsheres of porous silica are MCM-41, SBA-15 etc. Wide range of applications say catalytic, biological, energy applications have been investigated and reported using this materials.

Among all of the morphologies, reports on spherical type silica and organosilica nanoparticles with the nanoscale level porosity are most abundant in literature. Silica particles can be found with pores the range of micropore (<2 nm) to mesopore (2–50 nm) arranged in an ordered and non-ordered way[1] [1].

In 1956, Kolbe et al., first synthesized highly dispersed non-porous silica particles with the help of silicon alkoxide hydrolysis and condensation principle in alcohol[2] [19]. Later, the controlled synthesis of micrometer-sized monodispersed silica sphere has been mentioned by Stöber et al., in 1968[3] [20]. They used ammonia as base as well as morphology-controlling catalyst to produce spherical particles by the hydrolysis of alkyl silicate in alcoholic medium. For surfactant-free synthesis of mesoporous silica nanosphere with tunable pore diameter (100–230 nm) role of ammonia has been proved to be very crucial. Here, a facile two step pathway by premixing three components TEOS-H2O-EtOH with definite molar ratios followed by addition of ammonia, then the treatment of the resulting silica by water dilution and soft-etching with ammonia produce monodispersed porous silica sphere[4] [21]. Usually, mesostructured spherical silica material, like MCM-41 with hexagonally ordered mesopores, can be produced based on the condensation of self-assembled cationic surfactant and hydrolysed silica precursor, tetraethyl orthosilicate or TEOS under highly alkaline condition[5] [11]. Additionally, instead of TEOS, use of commercially available silica gel say, Lichrosphere 100 results pseudomorphic synthesis of MCM-41 with perfect spherical shape[6] [22]. In the same way, pseudomorphic synthesis of large size spherical shaped Co-doped MCM-41 has been reported by Lim et al., who synthesized the material using commercial silica, cobalt salt and CTAB surfactant in highly basic medium[7] [23]. Presence of Na ion in the reaction medium inhibits the homogeneous distribution of Co species in the silica matrices. Thus, well-defined spherical morphology of Co-MCM-41 was achieved by optimizing the autoclaving time to four days. On the other hand, in HCl acidic media long ageing time has also been employed by Alonso’s group to synthesize functionalized silica sphere using CTAB, TEOS, and isopropanol based on spray-drying method[8] [24].

Sometimes, by using weakly basic amino acid like arginine the hydrolysis of TEOS can be controlled at moderate pH (9–10), which results in the formation of discrete silica nanosphere of 20–40 nm size[9] [25]. Moreover, the size of the particles can be varied significantly by changing the stirring rate, amount of water, or cationic surfactant C16TMACl. Surfactant cetyltrimethylammonium chloride (C16TMACl) has also been used by Qiao et al., in order to synthesize uniform mesoporous spherical silica sphere at moderate pH = 6–10 in the presence of certain suitable additives like diethanol amine, triethanol amine, ammonia or any inorganic salts[10] [26]. Monodispersed silica nanospheres can also be obtained simply using sodium acetate additive in the presence of C16TMACl surfactant and TEOS at moderate reaction temperature ca. 60 °C without adding any other alkalis[11] [27]. In order to control the particle growth in nanometre range, the use of amino acid like lysine has been mentioned by Nandiyanto and his group. Here, the synthesis of mesoporous spherical silica sphere of 20–80 nm diameter was done using styrene and CTAB surfactant in water-octane media[12] [28]. Styrene is polymerized in the reaction medium in order to produce polystyrene that acts as a template for this silica preparation, because a comparative study showed that, with increasing styrene concentration, particle size and pore size both gradually increase. Figure 13 shows a schematic representation for synthesis of mesoporous silica nanoparticles in the presence of CTAB-PS and amino acid lysine. 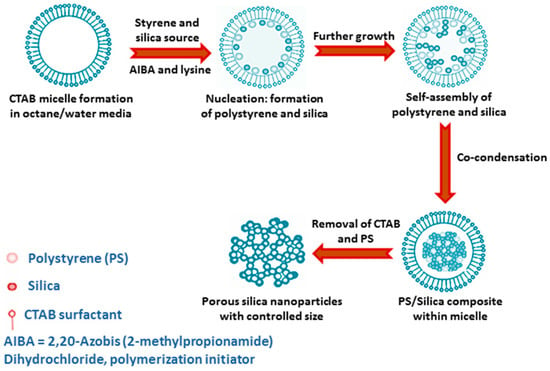 In 2010, Polshettiwar et al., mentioned the formation of fibrous silica nanospheres while using cationic template like cetylpyridinium bromide (CPB) or CTAB and urea as hydrolysing agent in a solvent mixture of cylcohexane, pentanol, and water[13] [29]. The role of non-polar template chain cetyl group and the polar head pyridinium or trimethylammonium group to produce this well-defined fibrous morphology is very crucial, owing to the surfactant packing parameter. Not only that, fabrication of this fibrous nanosilica sphere is highly dependent on precise control of urea amount as well as proper selection of combined solvent, cyclohexane, and pentanol. It was also observed that the resulting silica spheres have very high mechanical and thermal stability.

The formation of monodispersed silica nanosphere while using Pluronic triblock copolymer templates and sodium silicate in strong acidic aqueous media is highly dependent on the parameter like presence of counterions viz. Cl− and NO3−, which control the hydrophilicity of the reaction media resulting precise spherical shape[18] [34]. Additionally, the particle size has been monitored by changing the reactants ratio, stirring speed, or by mixing of surfactants. Pluronic template F127 can also act as particle dispersion agent to synthesize monodispersed cubic mesostructured MCM-48 silica nanosphere in a CTAB templated basic water-ethanol media[19] [35]. A diluted solution of CTAB and higher concentration of F127 facilitates the formation of well-defined smaller sized MCM-48 nanoparticles. In the similar way, a combination of surfactants CTAB and Brij-56 has been employed by He et al., in order to synthesize highly dispersed ordered mesoporous spherical silica nanoparticles under buffer maintained neutral pH condition[20] [36]. Here also, the role of non-ionic surfactant Brij-56 is to improve the morphology and dispersivity of the silica nanoparticles, although the mesostructure was little disrupted by this. Monodispersed silica microsphere can be obtained by the evaporation induced CTAB-Brij 58 templating method while using vibrating orifice aerosol generator, as reported by Rama Rao et al.[21] [37].

Use of a dispersing agent to synthesize well-dispersed three-dimensional (3D) porous silica sphere has also been reported by Fu and his co-workers [22][38]. They used carboxymethyl cellulose as dispersing agent in a dodecyltrimethylammonium bromide surfactant-mediated to fabricate cubic silica nanoparticles of ca. 60 nm via the rapid two-step pH-modulated method. Huo et al., reported the preparation of porous hard sphere silica particles using tetrabutyl orthosilicate (TBOS) as silica source in aqueous NaOH media[23] [39]. Here, the desired morphology of silica is obtained while hydrophobic TBOS and butyl alcohol that was produced from the hydrolysis of TBOS in basic media creates oil-in-water emulsion and stabilized by the quaternary ammonium CTAB surfactant. Han et al. reported another strategy using mixed surfactants. They used triblock copolymer surfactant (e.g., F127, P123) and cationic fluorocarbon surfactant FC-4 for the preparation of well-dispersed mesoporous silica nanosphere in weakly acidic media[24] [40]. The role of FC-4 is to get ultrafine particles by controlling the growth of particle, while mesostructure formation is facilitated by copolymer template. 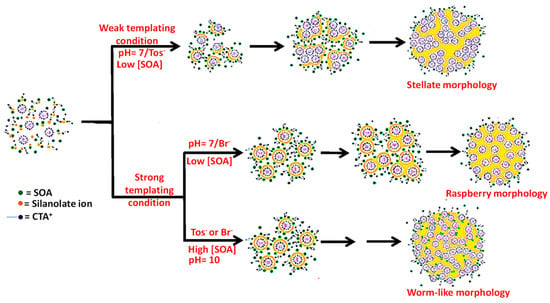 Surface functionalization of silica materials has been demonstrated by Bagwe et al. in order to reduce nanoparticle aggregation[31]. [47] Surface modification was carried out using TEOS and different organosilanes in aqueous ammonia media based on a water-in-oil (W/O) or reverse microemulsion method. It was observed that the surface modification of silica with amine groups is further supported by an inert group (e.g., methyl phosphonate), for which highly monodispersed silica nanospheres have been obtained. Cheng et al. also reported well-dispersed mesoporous silica nanoparticles by proper functionalization[32] [48].

Modified Stöber method has been employed for synthesis of well-defined spherical and monodispersed PMO by Rebbin and co-workers[33] [49]. They used different long-chain tetraalkylammonium halide as surfactants and 1,2-bis(trimethoxysilyl)ethane (BTME) as silica precursors in ammoniacal water-ethanol media in order to obtain this PMO. Using the similar method, another PMO nanosphere having ethylene groups in their framework has been synthesized by Xia et al., in the presence of bis(triethoxysilyl)ethylene (BTEE) precursor and CTAB template[34] [50].