Marine Protected Areas (MPAs) are one of the most effective conservation tools in the management of marine ecosystem alterations around the world, by maintaining natural ecological processes, increasing ecosystem resilience, preserving genetic diversity, ensuring the sustainable utilization of species and ecosystems, restoring the biomass and structure of species assemblages, and providing socio-economic benefits. The majority of Mediterranean MPAs are at a high risk of invasion and their boundaries offer almost no protection from many high-impact invasive species.

In the Mediterranean Sea, Marine Protected Areas (MPAs) are described as clearly defined marine geographical spaces (including subtidal, intertidal and supratidal ecosystems, together with coastal lakes/lagoons connected permanently or temporarily to the sea), which are recognized, dedicated and managed through legal or other effective means, to achieve the long-term conservation of nature with its associated ecosystem services and cultural values [1]. As clearly implied by this broad generic term, MPAs are the most effective conservation tool in the key management of marine ecosystem alterations around the world [2], by maintaining natural ecological processes, increasing ecosystem resilience, preserving genetic diversity, ensuring the sustainable utilization of species and ecosystems, restoring the biomass and structure of species assemblages, and providing socio-economic benefits [3][4][5]. These advantages, however, can only be noticeable in appropriately sited, strongly protected and effectively managed MPAs [3], which prominently protect natural habitats and species from multiple local human stressors, e.g., overexploitation of living resources and habitat destruction [6]. The recent assessments of the development of MPAs in the Mediterranean Sea during the last decade show progress towards the increased protection of marine and coastal areas; however, results are not encouraging and effectiveness of management measures are still a matter of concern [7]. Currently, 9.7% of the Mediterranean Sea is designated as MPAs, but only a small portion are associated with a properly implemented management plan and few countries have fulfilled the designated target of 10% by 2020, pointed out both in the UN Sustainable Development Goal 14 and Aichi target 11 (Convention on Biological Diversity) [8].
MPAs appear to be quite vulnerable when the enormous impacts of global-scale stressors such as climate change, pollution and biological invasions are taken into consideration [9]. The latter phenomenon is of special importance throughout the Mediterranean Sea, since the basin is among the most ecologically altered marine regions globally, representing a hotspot of biological invasions [10][11]. Human-mediated alien species introductions are regarded as one of the main causes of drastic biodiversity changes in the region, causing a troublesome problem because of the unprecedented rate of their invasion, and the irreversible impacts they pose on local ecosystems, human health and the socio-economy [12][13], and so their impact on protected areas could thus be much more severe [14][15]. Despite the widespread theory that MPAs are resistant to invasion owing to their high species diversity and putative abundance of predators, competitors and parasites of alien species, this hypothesis is not fully supported and marine reserves may even promote the introduction of alien species [10][16].
Biodiversity and ecosystem conservation in Turkey is ensured by protected areas dispersed in 15 different categories (National Parks, Special Environment Protection Areas, Strict Nature Reserves, etc.), managed officially by two governmental bodies (Ministry of Agriculture and Forestry and Ministry of Environment and Urbanization). Currently, about 6.8% of Turkey’s marine areas are nominally protected, which is significantly lower than the reported regional and global figures [8][17]. As with most parts of the Mediterranean Sea, alien and invasive species inventories specifically concentrated on MPAs are scarce in Turkey, where existing information is provided by a series of government-funded projects in the early 2000s [18][19][20], clearly outdated and seeking critical revisions. In order to promote the development of coordinated efforts and management measures throughout the Mediterranean Sea, a basin-specific action plan concerning species introductions and invasive species was recently published [21].

The alien species inventory of Turkish MPAs included a total of 289 species belonging to 15 phyla, the majority of which had established successfully breeding populations throughout the study sites (61.6%) and a significant portion displayed an invasive character (29.4%). Mollusca ranked first in terms of the number of alien species (64 sp.), followed by Chordata (55 sp.), Arthropoda (44 sp.) and Annelida (39 sp.).

There were significant differences in local alien biodiversity, with a clear decreasing pattern in a clockwise direction from Levantine towards the northern Aegean Sea coasts. The cluster analysis showed that MPAs were clearly separated into two groups (northern Aegean Sea areas vs. southern Aegean Sea and Levant Sea combined) at 30.0% similarity, which split further at 46.0% and 56.9% similarities (Figure 1).

It is striking that the number of casual aliens is quite low throughout the entire study area (none in Foça and Köyceğiz-Dalyan, ranging from 1.2% to 6.9% elsewhere), where the great majority of the species are either characterized by successfully breeding established populations or possess an invasive character (Figure 2). The proportion of invasive taxa ranged from 37.0% (Göksu Delta) to 62.3% (Köyceğiz-Dalyan), displaying a large-scale impact regardless of their occurrence localities. The two invasive fish, Lagocephalus sceleratus (Gmelin, 1789) and Siganus rivulatus (Forsskål, 1775) were present in each of the MPAs, while some other noxious species, such as Caulerpa cylindracea (Sonder, 1845) (Chlorophyta), Asparagopsis armata (Harvey, 1855) (Rhodophyta), Leodice antennata (Savigny, 1820) (Annelida), etc., were absent in just a few sites.

According to their origins, there was a very pronounced dominance of Red Sea originated species (201 sp., out of 289 sp.), while the contribution of rest of the categories was set at low levels (Figure 3). This was an expected result, since Turkey was geographically located close to the Red Sea, which explained why corridors (Suez Canal) were the main vector of the species introductions (Figure 4). Ship-transferred species were higher in proportion at the north Aegean MPAs (Saros Bay, Ayvalık Islands, Foça and Karaburun-Ildır, ranging between 28.1–48.1%), significantly reducing to levels of 8.7–18.0% in the rest of the coastal areas. Saros Bay was the only locality that shipping-oriented introductions outnumbered Suez Canal introductions (13 sp. vs. 9 sp., respectively); the latter vector was dominant elsewhere. Aquaculture was the least impacting vector and only four such species were present in MPAs (for example, the Pacific Ocean originated invasive bivalve Ruditapes philippinarum (Adams & Reeve, 1850)). 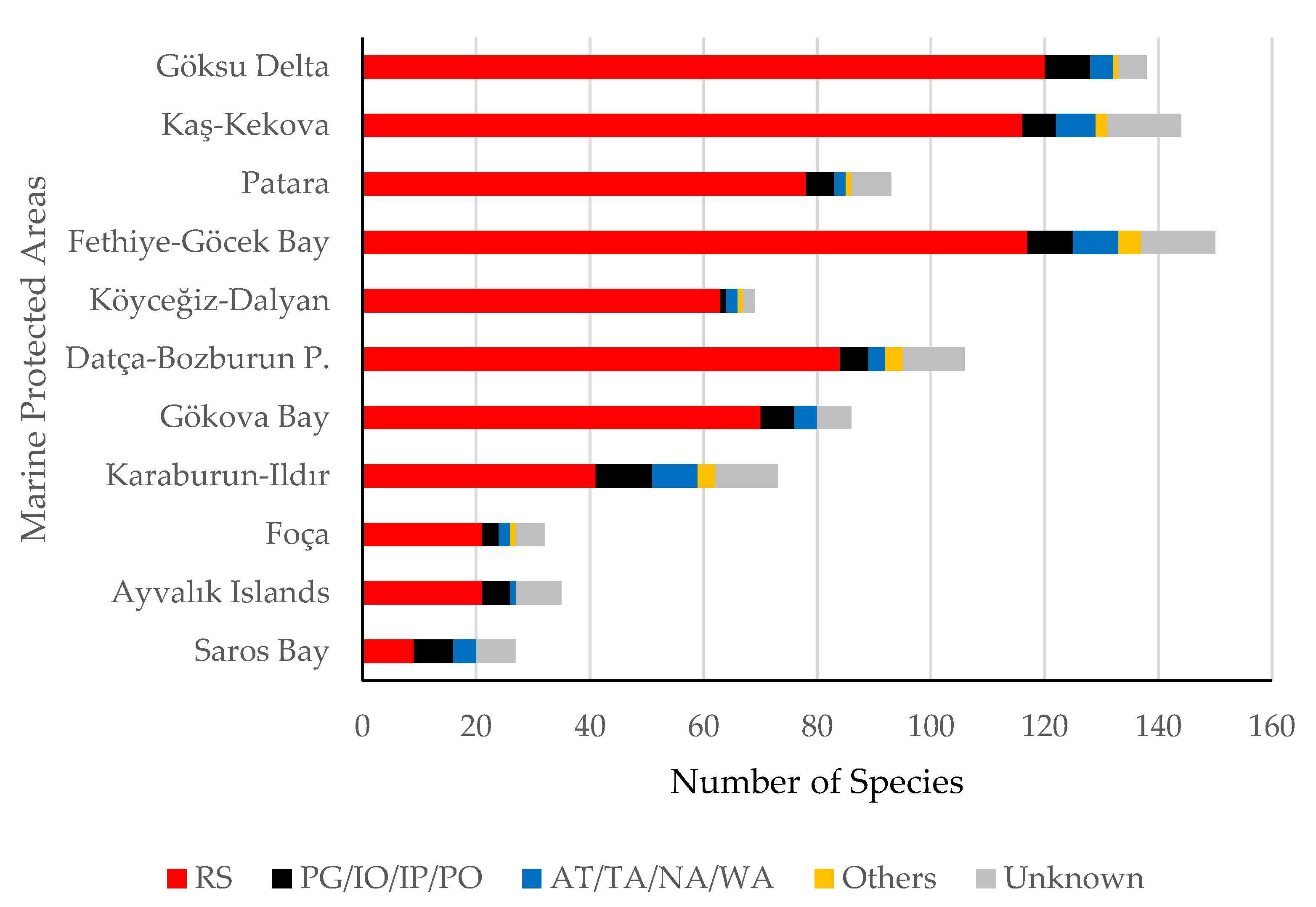 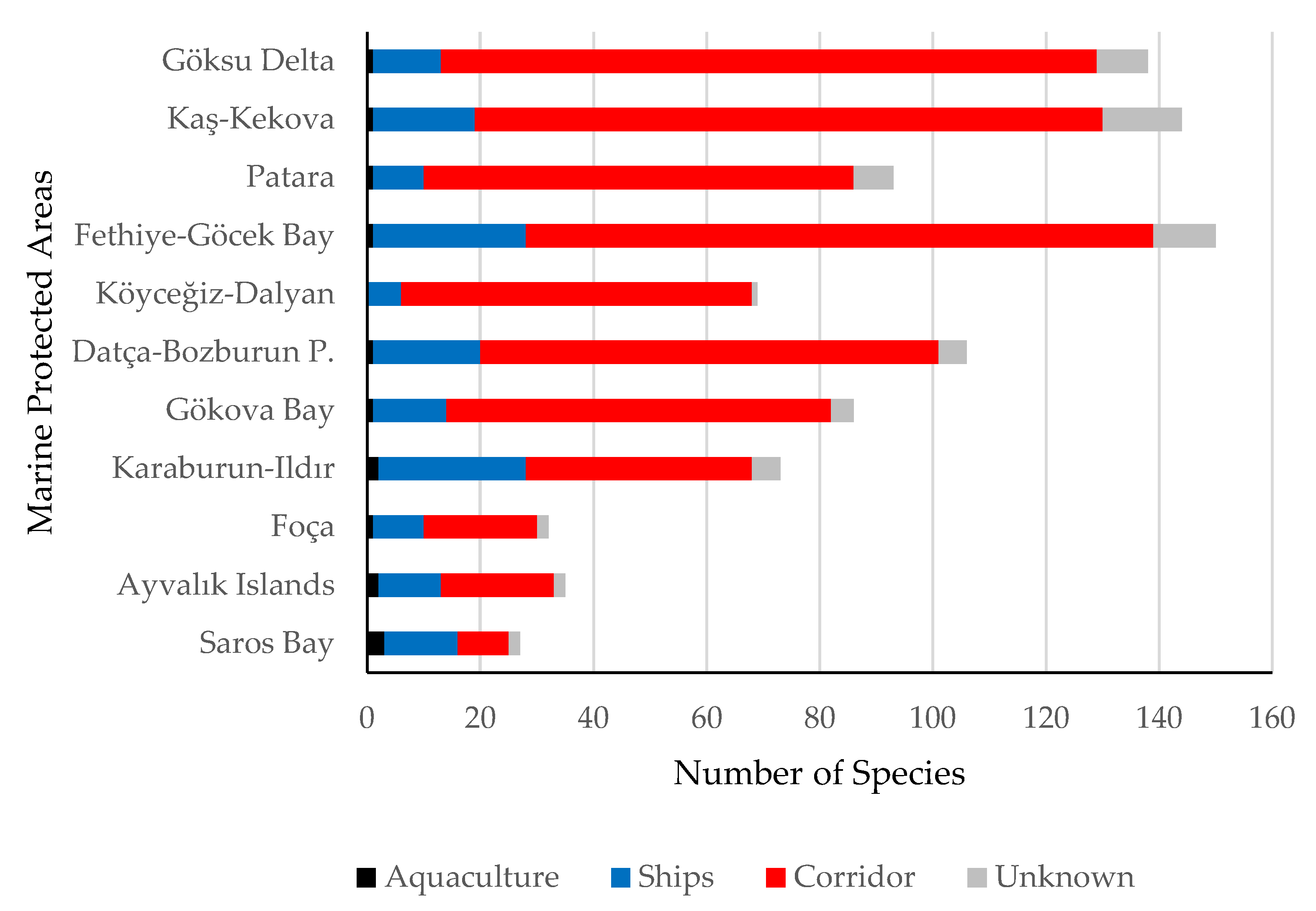 Figure 4. Pathways of the introduction of alien taxa in MPAs.

Pathways of the introduction of alien taxa in MPAs.