Glioblastoma (GB) is the most common type of malignant brain tumor. It affects 7 per 100,000 people a year. The disease has a poor prognosis and patients generally die within 14 months of diagnosis. Recent studies have reported the crucial role of microRNAs (miRNAs) in clinically-resistant glioblastoma.

Glioblastoma (GB) is the most common and devasting malignant brain tumor [1,2]. It affects 6 per 100,000 people a year [3]. Survival time is on average 2–18 months and a 5-year period of survival occurs only in 5% of patients [4]. Commonly used treatments are surgical resection combined with radiotherapy and chemotherapy [5]. Moreover, radiation exposure and genetic predisposition are well-defined risk factors for glioblastoma. Even, contemporary therapy like radiotherapy combined with the drug temozolomide has provided enhanced survival up to 24 months [6]. The main risk factor of this disease is unclear [7]. MicroRNAs (miRNA) are endogenous small non-coding RNA [8]. Recent studies have reported the crucial role of miRNAs in resistant glioblastoma. Even various miRNAs are involved in the pathogenesis of GB-like contributions in the processes of angiogenesis, metastasis, and tumor growth [9]. MiRNAs regulate gene expression by targeting mRNAs and directly binding to complementary sequences at the 3′UTR of the mRNA [10]. MiRNA then acts as a gene silencer and the miRNA level might regulate the initiation and progression of GB. Many miRNAs have been implicated in GB pathophysiology and therapy [9]. Another interesting study showed that the cytosine methylation of mature miRNA inhibits their tumor suppressive nature and also provides poor prognosis for the glioblastoma [10]. Studies on GB and miRNA are important for improving GB treatment and early diagnosis [9].

Glioblastoma is a WHO grade IV astrocytoma that represents about 30% of all brain tumors [11]. It is a highly vascularized and infiltrating tumor [5]. It originates from glial cells [12] and presents a poor prognosis and high lethality in adults [7]. GB is resistant to the induction of apoptosis, and anti-apoptotic proteins are overexpressed in GB [13]. The fast proliferative ability has been characterized as one typical feature of GB, leading to treatments and dismal prognosis [14]. The current international standard for nomenclature and diagnosis of the WHO (World Health Organization) classified glioma into four classes. More generally into low-grade gliomas (LGG, WHO I and II), and high-grade gliomas (HGG, WHO III and IV). Grade I gliomas relate to lesions that have low proliferative potential and can be cured by surgical procedures, whereas grades II to IV gliomas are highly infiltrative GB and the most common and malignant type of glioma.

MiRNAs are endogenous, small, non-coding RNA molecules containing about 19–24 nucleotides in length [15]. They are also found in plants, animals, viruses, and some bacteria. MiRNAs regulate gene expression by targeting mRNAs, and after directly binding to the complementary 3′UTR site of the target mRNA [3], miRNA acts as an mRNA silencer. MiRNAs can regulate multiple target mRNAs involved in resistance by controlling many biological processes including apoptosis, DNA damage repair, proliferation, cell cycle, senescent, invasiveness, and angiogenesis [16]. Generally, mRNA acts in two possible ways in mRNA silencing: mRNA degradation or translation inhibition through the actions of the RNA-induced silencing complex (RISC). MiRNAs are important regulators of several key signaling pathways implicated in tumor pathogenesis [17]. Some miRNAs can inhibit migration and suppress tumor growth. MiRNA expression levels vary in different tissues and cells and are significantly different in normal cells versus stem cells [18].

MicroRNA biogenesis starts with RNA polymerase II binding with DNA in the cell nucleus to form a new primary miRNA. The protein DGCR8 and enzyme DROSHA ribonuclease bind to primary miRNAs. DROSHA cleaves primary miRNA to form a precursor miRNA. The precursor miRNA moves from the nucleus to the cytoplasm with the help of exportin5, to bind Dicer ribonuclease that cleaves precursor miRNA to form a ds-miRNA. RISC (RNA-induced silencing complex) is a multi-protein complex including Argonaute endonuclease that binds double-stranded miRNA and produces single-stranded miRNA. Commanded by RISC, miRNA binds to mRNA. Finally, mRNA degradation or mRNA inhibition of translation is induced (Figure 1). 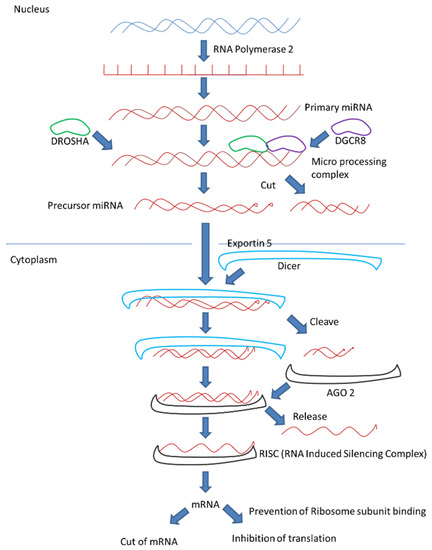 Figure 1. MicroRNA maturation and function: first, synthesis of double strand primary miRNA occurs in the nucleus with the help of RNA polymerase 2. Then primary RNA undergoes modification with the help of a microprocessing complex containing DROSHA and DGCR8 to form precursor miRNA. This precursor miRNA is further transported to cytosol with the help of exportin 5, and thereafter it is cleaved to a smaller fragment. Finally, the smaller double helix miRNA fragment is released to the single helix miRNA and further commanded by the RISC (RNA-induced silencing complex) to degrade or inhibit the target mRNA.

An important reason for the inadequate response of GB to radiotherapy is radioresistance. MicroRNAs (miRNAs) are important regulatory molecules that can effectively control glioblastoma by affecting signal transduction pathways [16]. MiRNAs act as diagnostic biomarkers in brain tumors and are used for tumor treatment [12]. MiRNAs mediate the suppression of anti-apoptotic and induce apoptosis in cancer cells [13]. Deregulated levels of cerebrospinal fluid (CSF) in miRNA are associated with glioblastoma. Different types of miRNAs and their expression levels in glioblastoma suggest the feasible development of a new diagnosis method for glioblastoma. Some miRNAs down-regulate the growth of glioblastoma, and therefore, they may be used for therapy against this tumor. On the other hand, as various miRNAs support cell growth in glioblastoma, they might be considered as candidates for the stratification of poor prognosis glioblastoma. Most researchers investigating the relation of glioblastoma and miRNAs have utilized methods to understand the function of miRNAs in glioblastoma. Clinical glioblastoma tissue samples were collected from patients and the samples were frozen at –80 °C. Thereafter, mRNA and protein expression analysis was performed and the methylation profile of the matured miRNAs was also checked. For cell culture, T98G, U251, and U87MG glioma cell lines were grown in Dulbecco’s modified essential medium (DMEM) and supplemented with 10% fetal bovine serum, 1% Penicillin, and 10% streptomycin after culture in a 5% CO2 humidified incubator at 37 °C. After reaching 70% confluency, the samples were treated with a miRNA mimic in 6-well culture plates. After 24 h, 48 h, and 72 h cells from each well were trypsinized, single-cell suspensions were prepared, and cells were counted. Cells were centrifuged at 4 °C at 5000 rpm for 5 min. Cell pellets were stored in RNA to be utilized later for further RNA extraction processing. RNA extracted samples were used for cDNA processing. Thereafter, cDNA was used for real-time PCR to determine different gene activity. Moreover, western blotting was also done to determine the protein level, and we then performed statistical analysis of the expression results obtained by real-time RT-PCR. For diagnosis, we collected the cerebrospinal fluid sample, isolated the RNA, used amplification after the qRT-PCR, increasing sensitivity to apoptosis induced by the DNA alkylating agent temozolomide in vitro, and performed western blotting. DS (diagnostic score) values were calculated and used in the diagnosis of the tumor.

miRNA glioblastoma diagnosis treatment
© Text is available under the terms and conditions of the Creative Commons Attribution (CC BY) license (http://creativecommons.org/licenses/by/4.0/)