Heat-related illness (HRI) is a potentially fatal condition affecting man and animals, predicted to become more frequent as climate change increases the severity and regularity of heatwave events [1]. Rising global temperatures require human populations to consider mitigation strategies in order to survive, this could include migration away from the hottest regions [2] or adaptations to hot environments such as including air cooling mechanisms and changes to working practices to reduce the risk of HRI when working outside [3]. Domestic dogs intertwine with every aspect of human society, providing both companionship and essential working services such as hearing and visual assistant dogs, medical detection dogs and military working dogs [4]. It is therefore essential that we understand the risk factors for canine HRI to ensure adaptations to rising global temperatures can include consideration of canine companions and colleagues.

Heat induced illnesses were previously defined by the terms "heat cramps", "heat exhaustion" and "heat stroke", distinguishable as separate conditions largely defined by the patient's body temperature and neurological status [5]. Recent studies have suggested a novel staging system - the Japanese Association of Acute Medicine Heat-Related Illness Classification - which recognises that heat-related illness is a progressive disorder [6][7]. The novel staging system has three stages, ranging from mild (stage I) to severe (stage III) HRI. This classification acknowledges that a patient with stage I HRI will progress to stage II if they are not treated appropriately or continue to be exposed to a heat source [7]. Whilst this novel classification has not yet been explored in canine HRI patients, it is likely they also experience a progressive disorder.

Two main triggers are identified for HRI in humans: exertional and environmental [5]. Exertional HRI typically follows prolonged, intense exercise,  or any exercise or physical labour in a hot environment [5][8]. Environmental HRI, sometimes referred to as classic or non-exertional HRI, tends to follow prolonged exposure to high ambient temperatures or short exposure to extreme heat [9]. Young children and babies are at risk of a subtype of environmental HRI - vehicular HRI - following confinement in a hot vehicle after being left or after accidentally locked inside the vehicle [10]. In humans, exertional HRI most commonly affects young active men either working in physically demanding industries or participating in sports [11]. Exertional HRI is the third leading cause of death in US high school athletes, and the incidence of HRI in the US Armed Forces has been gradually increasing since 2014 [12]. Conversely, environmental HRI typically affects the socially vulnerable, the elderly or people with chronic medical conditions, who may be confined indoors and less able to thermoregulate or adapt [13][14].

Studies from Israel [15][16][17][18] and the UK [19] suggest exertional HRI as the predominant trigger of heatstroke in dogs, whilst a German veterinary hospital reported more vehicular HRI cases [20], and a study from Philadelphia USA reported roughly equal numbers of environmental and exertional canine HRI [21]. Dogs are likely to share similar risk factors to humans for the various types of HRI. Understanding the predominant triggers for canine HRI and identifying canine risk factors for the different types of HRI may improve both early recognition and prevention of HRI in dogs.

Whilst HRI is reported to be a relatively common condition in dogs living in hot or tropical climates [15] [21], these reports are from veterinary hospitals, often receiving referrals from a large geographical locations and thus potentially not representative of the general canine population [22]. Conversely a large scale UK study has reported a HRI incidence of 0.04%, from a denominator population of over 900,000 dogs presenting to primary-care veterinary practices [23]. Whether it was the primary-care based population or the temperate UK climate that resulted in a comparatively lower incidence of HRI is unclear, however as climate change accelerates the frequency and intensity of heatwaves [24] the number of dogs affected by HRI is likely to dramatically increase.

Whilst HRI predominantly affects dogs in the traditionally warmer summer months, it can occur all year round [19]. In the UK, vehicular and environmental HRI have only been recorded between March and September, coinciding with the period where internal vehicle temperatures have been recorded exceeding 35 °C [25]. In the UK exertional HRI can occur all year round (figure 1), whilst fatalities typically occur between March and October, one exertional HRI fatality has been reported in January [19]. Exertional HRI events in UK dogs were predominantly triggered by relatively low intensity exercises, namely walking and playing [19]. 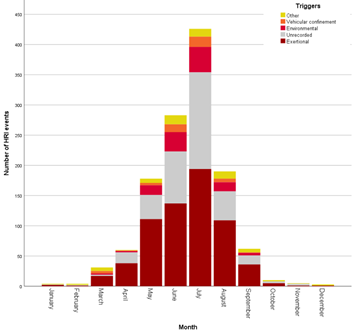 Figure 1. Histogram showing the number of heat‐related illness events by trigger, per month in UK dogs between 2016-2018 [19].

Reports of canine HRI fatality rates from referral hospital populations range from 36-50% [15][20][21], these studies included only dogs with heat stroke, and were typically from hotter climates. A fatality rate of 14% (1 in 7 affected dogs) was reported from the UK based primary-care study [23], which included dogs with all three stages of HRI. In the UK, around a third of HRI fatalities have been reported to occur in July, typically the warmest month (figure 2). 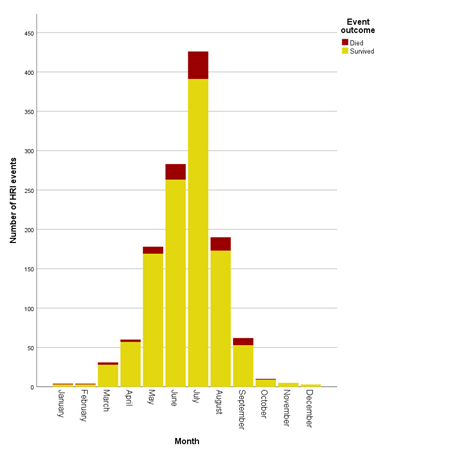 Figure 2. Histogram showing the number of heat‐related illness events by outcome per month in UK dogs between 2016-2018 [19].

Studies have identified the following breeds as having increased risk of HRI:

The Labrador Retriever, Chow Chow, Bulldog, French Bulldog, Greyhound, English Springer Spaniel, Cavalier King Charles Spaniel, Staffordshire Bull Terrier, Boxer, Golden Retriever and Border Collie have all be identified as being particularly at risk of exertional HRI [19]. The Chow Chow, Bulldog, Pug and French Bulldog are also at greater risk of environmental HRI, and the Bulldog, Greyhound, Cavalier King Charles Spaniel, French Bulldog and Pug are at greater risk of vehicular HRI [19]. No breeds have been identified with a reduced risk of HRI in general likely because HRI requires extrinsic input, they must be exposed to a hot environment and/or an activity that significantly increases body temperature in order to develop the disorder [23]. The Chihuahua was identified as having reduced odds for exertional HRI when compared to crossbred dogs [19]. This is likely to be partly due to their small body size and also potentially as a result of their status as a "handbag dog", meaning they are perhaps more likely to be carried than walked [26].

Brachycephalic dogs have been identified has having greater odds for exertional, environmental and vehicular HRI [19], with a third of owners recognising that their brachycephalic dogs struggle with temperature regulation [27]. Unlike humans, dogs do not use sweating as a primary cooling mechanism [28], instead they rely on evaporative heat loss through panting, with inspired air passing over nasal mucosa providing the primary site of evaporative heat loss [29]. Brachycephalic dogs have shortened muzzles, providing reduced surface area for effective evaporative cooling. Dogs affected by Brachycephalic Obstructive Airway Syndrome (BOAS), also have narrowed nostrils, larynx and trachea, which increases the resistance to air flow during respiration [30]. This resistance results in increased muscular effort required to effectively ventilate, meaning affected dogs may generate more heat trying to breathe, than they lose via panting. Respiratory diseases such as (BOAS) have been shown to accelerate the increase in body temperature during exercise [31] and have greater odds of developing HRI compared to dogs with longer muzzle [23].

Increased bodyweight can be due to either increased lean muscle mass, or increased body fat. As muscles generate heat during exercise, dogs with greater muscle mass develop higher body temperatures during exercise [32][33]. Increased fat deposition limits conduction and radiation from the surface of the skin, and can also limit effective cooling via respiration by reducing tidal volume [34], overweight animals also overheat faster and take longer to cool [35]. Obesity has been reported as an important risk factor for death in dogs with HRI [15], and dogs with a bodyweight above the relative breed/sex mean have been reported to have increased risk for HRI compared to dogs that weighed below the breed/sex mean [23]. Dogs weighing over 50kg appear to have the greatest risk of HRI in general [23], whilst all dogs weighing over 10kg have increased risk of exertional HRI when compared to dogs weighing 10kg or under [19]. Smaller dogs have a higher heat storage to radiative surface area ratio than large dogs, meaning they can cool more effectively and exercise for longer before overheating [36][37].

Reflecting human risk factors for HRI, dogs of different ages are at risk of different types of HRI. Young active dogs are at greater risk of exertional HRI, whilst dogs 12 years old or over are at greater risk for environmental HRI [19]. Older dogs are more likely to suffer from underlying health conditions that impact thermoregulation such as heart disease [38], which could increase the likelihood of environmental HRI [39]. In humans, advancing age increases environmental HRI risk due to reduced physiological thermoregulation ability, namely reduced sweat production and decreased blood flow to the skin [40]. Similarly, impaired cooling mechanisms are also likely to affect older animals.

Reflecting the male predisposition to exertional HRI in humans, male dogs develop a higher body temperature than females during intense exercise [32][33], and are at increased risk of exertional HRI [19]. Neutered female dogs have also been identified as having increased risk of exertional HRI compared to entire females [19], although the precise mechanism behind this is not yet fully understood. Females may be at reduced risk compared to males due to their typically smaller body size and reduced lean muscle mass, or it may be that periods of confinement due to oestrous, pregnancy and lactation may simply reduce their exercise levels.

Dogs share similar risk factors to humans for both environmental and exertional HRI. Young, active male dogs are most at risk of exertional HRI, whilst older dogs and dogs with underlying health issues such as respiratory compromise are most at risk of environmental HRI during hot weather such as heatwaves. Studies from the UK and Israel suggest that exertional HRI is the predominant heat-related disorder affecting dogs, with 74% of UK HRI events triggered by exercise. As societies plan mitigation strategies to cope with rising global temperatures it is essential that consideration is given to dogs, not only to protect the health and welfare of millions of pets, but also to ensure working dogs can continue to fulfil their vital roles as assistance, detection and policing dogs.