Boar taint is an unpleasant odor/taste caused by androstenone (AND), skatole (SKA), and to some extent indole (IND) present in the fat tissue of uncastrated male pigs [1][2][3][1,2,3]. Traditionally male pigs are castrated to prevent this boar taint, but growing welfare concerns are pushing the pig industry towards raising uncastrated or entire male pigs. Preventing tainted meat from reaching the consumer is a primary concern for the pig chain.

Olfactory boar taint evaluation can be used as a boar taint detection system, in experimental settings as well as for an online detection system at a slaughterhouse. Although different training protocols have been described [4], they are all similar in their underlying principles. Anosmia for AND, i.e., the inability to smell AND, is well documented in humans and is a critical criterion for exclusion of a panelist in an olfactory boar taint panel [5]. It has been found that the incidence of anosmia for AND is higher among men than women, and higher among older people. No difference was found between smokers and non-smokers. It is generally advised though to abstain from smoking, as well as eating and drinking half an hour prior to evaluating boar taint [6]. For Belgium 54.7% of subjects have been found to be anosmic for AND [6]. No such anosmia was found for SKA [7]. Testing for AND sensitivity is thus a necessary first step in selecting suitable panelists. This is generally done by offering a discriminatory test with AND on smell strips or dissolved in water. After this selection procedure, retained candidates are acquainted with the odors from heated pork fat and trained with smell strips containing boar taint compounds. They are taught the scoring system and given feedback about their scoring during training until they perform the tests with a minimum of mistakes [8][9][10][11][8,9,10,11].

When used in experimental settings, olfactory evaluation is mainly performed by a panel of experts to optimize the reliability of the sensory method.

Although olfactory evaluation of boar taint is becoming a routine practice in some (European) slaughterhouses, literature on the repeatability, the detection limits and the effect of training and priming is scarce. It has been found that repeated exposure to AND increases a person’s acuity to that compound. This was tested over a period of six weeks [12]. Intra-rater reproducibility has been evaluated previously and has been found to be ranging from 0.19 to 0.32 which is considered low [9]. Concerning detection limits, for AND and SKA in sunflower oil they have been reported to be 0.21 µg/g and 0.10 µg/g respectively [13]. Variability in sensory thresholds over time has been found in earlier studies on smell strips on subsequent days (ranging seven dilution levels) [14]. 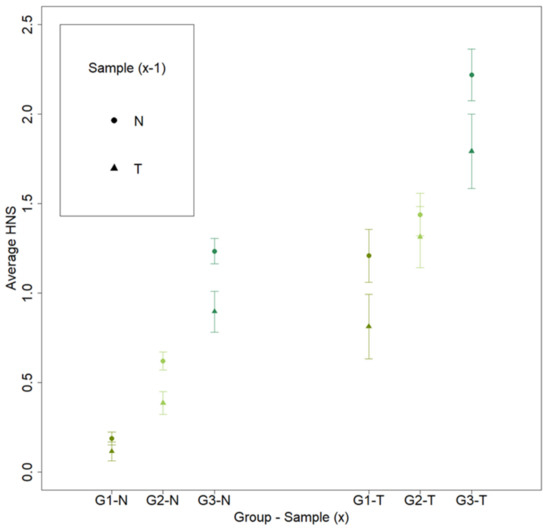 The interaction effect between type of participant group and the order of the presented series was significant (p = 0.005), reflecting that G3 and G2 gave a higher average score to samples from the first and second series compared to the following series they received (Table 1Table 3). Inter (consistency between raters) and intra (consistency within raters) rater reliability increased with increasing training and familiarity from 0.16 to 0.45 and from 0.18 to 0.53, respectively (Table 1Table 3). With lowering familiarity, sensitivity increased, and specificity decreased. Sensitivity and specificity also depended on the cutoff score chosen (CO1, CO2, or CO3). With increasing cutoff score, specificity increased mainly for G2 and G3, while sensitivity decreased in all three groups.

Figure 37. Sensory threshold in fat samples, each line represents the individual thresholds (y-axis) of a panelist for replicate tests on three different days (x-axis). For all compounds, (a) androstenone, (b) skatole, (c) indole, the thresholds varied considerably within and between panelists.

The estimated threshold for the respective compound is shown in Table 2Table 4. Thresholds per panelist and per day were plotted to illustrate the variation between and within panelists on smell strips (Figure 2Figure 6) and in fat samples (Figure 3Figure 7). For all compounds, the thresholds varied considerably within and between panelists.

Figure 26. Sensory threshold on smell strips, with each line representing the individual thresholds (y-axis) of a panelist for replicate tests on three different days (x-axis). For all compounds, (a) androstenone, (b) skatole, (c) indole, the thresholds varied considerably within and between panelists.