Synthesis of zeolite T with a variety of desired characteristics necessitates extensive work in formulation and practical experiments, either by conventional hydrothermal methods or aided with different approaches and synthesis techniques, such as secondary growth or microwave irradiation.

Synthesis of zeolite T with a variety of desired characteristics necessitates extensive work in formulation and practical experiments, either by conventional hydrothermal methods or aided with different approaches and synthesis techniques, such as secondary growth or microwave irradiation. The objectives of this review are to adduce the potential work in zeolite T (Offretite-Erionite) synthesis, evaluating determining factors affecting the synthesis and quality of zeolite T crystals. Attention is given to extensive studies that interconnect with other significant findings.

Zeolites are well-known porous crystal systems that exist in various sizes (nano-, micro-, etc.) and have been widely incorporated in different applications. They consist of a uniform size of pore distributions [1] which are also known as voids. Voids and cavities within the zeolite system are the factors that contribute to the unique properties of the zeolite. These voids and cavities are controlled by the type of crystals that grow and intergrowth within the zeolite membrane. Introduced for the first time by Bennet and Grad [2], nanoporous zeolite T (the rod-like shape shown in Figure 1) is identified to have within it an intergrowth framework that makes zeolite type T an exceptional species in the zeolite family. 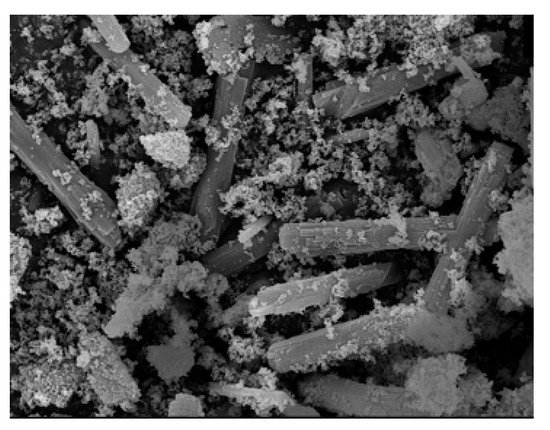 Figure 1. Rod-like shape of zeolite T synthesized by [3] (Reproduced with permission from Yin et al., Hydrothermal synthesis of hierarchical zeolite T aggregates using tetramethylammonium hydroxide as single template; published by Elsevier, 2015).
This intergrowth system is made up of a cancrinite group of hexagonal crystals of offretite (OFF) and erionite (ERI) (Figure 2). The interframe of these two entities causes an alteration in the crystal arrangement of zeolite T, which is AABAACAABAAC, instead of AABAABAAB [4]. Despite stacking within the zeolite system, OFF-ERI gives characters to zeolite T in terms of thermal stability, mechanical and chemical stability [1], acid resistance, and high ion selectivity [5], which makes zeolite T a promising candidate in catalysis, molecular sieves, ion exchange, and other applications [6].

Figure 2. Framework of offretite (OFF) [001] (a) and erionite (ERI) [001] (b) (IZA).
Unlike other zeolite members, zeolite T possesses different void sizes due to offretite and erionite intergrowth group. Offretite has 12-ring channels parallel to the c-axis and additional 8-ring subchannels that are normal to the c-axis. The pore size for the 12-ring channels is 0.67 nm × 0.68 nm, while 0.36 nm × 0.49 nm is the pore size for the 8-ring subchannels. Alternatively, erionite only has 8-ring channels parallel to the c-axis, with a pore diameter of 0.36 nm × 0.51 nm [1]. Generally, the framework of OFF and ERI may differ, but they are closely related. Notably, the ionic behavior of pure OFF and ERI is similar to the synthetic intergrowth, offretite-erionite, in zeolite T. Thus, zeolite Ts can be considered as intergrowth phases and are homogenous mixtures of two component phases of offretite and erionite [4,7][4][7].

Hydrothermal treatment is the most conventional and widely applied method for synthesizing zeolite T and is considered to be the earliest synthesis method, leading to high percentage (88–90%) product yields. It is a treatment that involves high temperature and pressure in the presence of water that acts not only as a solvent, but also aids in transferring pressure. It is a reaction mediator, capable of altering the physical and chemical properties of reagents or products, and it possesses the potential to be an accelerator in chemical reactions [8,9,10][8][9][10]. The hydrothermal synthesis technique is usually conducted on a mixture in a sealed vessel, where heat treatment is applied. This procedure is also labeled as an in situ reaction that strongly depends on temperature and time [1]. This method is easy to control during the synthesis phase, and recently, via hydrothermal treatment, the high purity and crystallinity of zeolite T were synthesized in 100 °C for 168 h [11,12][11][12].
Additionally, the synthesis method of zeolite T has evolved with the emergence of other methods fused with hydrothermal treatment, such as (i) microwave-assisted [9,10,11,12][9][10][11][12], (ii) sonochemical-assisted, and (iii) secondary growth techniques, for the development of zeolite T membrane.

The microwave-assisted method has been widely applied in zeolite synthesis for a decade due to its capability to rapidly produce high purity products with less time consumption [9]. With microwave assistance, the zeolite T membrane’s preparation time was shortened by 12 times, to only 9 h [3,11][3][11].
The effect of microwave irradiation gives impetus to the annihilation of normal hydrogen (H) bonding in water, causing ion oscillation and dipole rotation, which produces isolated, so-called active water molecules, which respond to the high rate of dissolving of the composition gel. Coupling the behavior of the microwave with the hydration of shell water molecules is efficient and favors the coordination change of the alumina octahedral layer to the tetrahedral layer, which is more reactive and essential in growing zeolite T materials. Hence, it results in thinner membranes that affect zeolite T’s permeability properties [10,11][10][11].
Figure 3 shows the morphology of thin, compact zeolite T membranes. Growing the rod-like zeolite T upon the alumina support tube required a secondary growth technique and several heating steps. The heating process affects the distribution of zeolite T on the membrane, and the distribution affects the membrane selectivity performance. It was found that the low power of microwave heating (4.8 kW/m3) led to insufficient growth of zeolite T (Figure 3a), while as the power density increased to 6.0 kW/m3, the membrane evolved with more defects (Figure 3b). Therefore, by controlling the heating power density of the microwave, high-performance zeolite T membranes can be synthesized [11]. 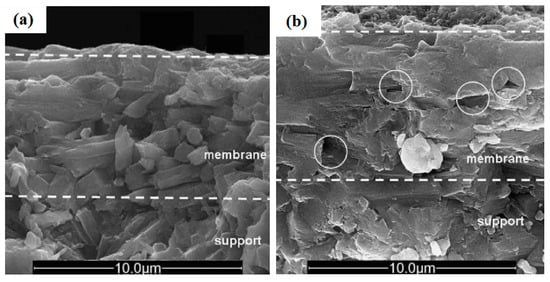 Figure 3. Cross-section of zeolite T membrane heated at 4.8 kW/m3 (a) and 6.0 kW/m3 (b); the circle indicates the area defects [11] (Reproduced with permission from Zhou et al., Microwave-assisted hydrothermal synthesis of a&b-oriented zeolite T membranes and their pervaporation properties; published by Elsevier, 2009).

The sonochemical-assisted method uses powerful ultrasound radiation (20 kHz–10 MHz) to treat the homogenous mixture before hydrothermal treatment. Nucleation and formation of zeolite T have been superior due to sonochemical effects from acoustic frequency usage, and this method has shortened the synthesis period from 168 h to 24 h [13]. Figure 4 shows the morphology of zeolite T synthesized with and without sonication pre-treatment.

Figure 4. Morphology of zeolite T synthesized in 168 h without sonication (a), and zeolite T form in 24 h assisted with sonication pre-treatment (b) [12] (Reproduced with permission from Jusoh et al. Rapid-synthesis of Zeolite T via sonochemical-assisted hydrothermal growth method; published by Elsevier, 2017).
The sonochemical-assisted method incorporates a similar concept to the microwave-assisted method, where the effect of vibrations influences the physicochemical phenomena that impute the nucleation and crystallization of zeolite T. In contrast to the microwave-assisted method, however, the sonochemical-assisted method stimulates a chemical reaction between solid and liquid in the zeolite T mixture by producing high energy acoustic cavitation, which will lead to the production of extremely high temperature (>5000 °C), pressure (>20 MPa), and very high cooling rates (>107 K s−1) [14].

The secondary method is a combination of primary method, where zeolite T is synthesized by following the optimum formulation. It is repeated twice using a supporter membrane (organic or inorganic), allowing more zeolite crystals to grow within the first system in two or more different composition gel formulations. Secondary growth is always related with seeding zeolite crystal seed on the supports, in direct hydrothermal in situ crystallization, either in a clear solution or in an aqueous gel inside an autoclave at a different temperature, depending on the types of zeolite; 90–100 °C for faujasite (FAU) or Linde type-A (LTA) while 180 °C for MFI type membranes [15]. The standard method for secondary growth is dip-coating, where the support base is dipped into the solution mixture containing the seed or crystal of zeolite T.
Figure 5 shows the illustrated dip-coating techniques’ execution. Using this technique gives an advantage in controlling the desired thickness of a membrane. 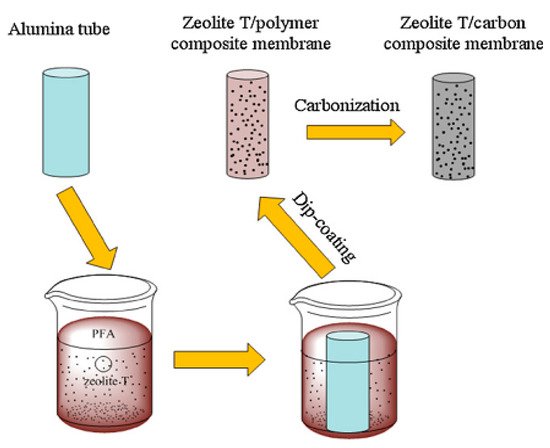 Figure 5. Schematic diagram of dip-coating method in preparing zeolite T/carbon composite [16] (Reproduced with permission from Yin et al., Thin zeolite T/carbon composite membranes supported on the porous alumina tubes for CO2 separation; published by Elsevier, 2013).
Consequently, Figure 6 shows the morphology of the zeolite T membrane prepared in different coating layers. Its thickness controls the selectivity and permeability properties of the membrane. As the coating cycle increases, the membrane terrace’s thickness and hence, the gas’ ideal selectivity is improved, while the gas’ permeance is reduced [9,16][9][16].

Figure 6. Morphology of zeolite T membrane undergone one coating cycle (a) and four coating cycle (b) [16] (Reproduced with permission from Yin et al., Thin zeolite T/carbon composite membranes supported on the porous alumina tubes for CO2 separation; published by Elsevier, 2013).
Despite the flexibility of the seeding method, several factors need close attention to maintain the quality and purity of the zeolite T crystal that grows on the support. Defects may occur during the process of growing the zeolite T particles, and the combination of this technique with microwave treatment helps to form a uniform oriented zeolite T membrane [11].
Moreover, (i) the surface roughness of the support, (ii) suspension concentration, (iii) seed size, and (iv) coating temperature are essential factors that will affect the coverage, thickness, and defect-free property of the dip-coating technique [15]. As the zeolite T seeds grow on the support surface, the seeds’ distribution is controlled by the suspension concentration, which is attributed to the layer thickness. Eventually, the thick membrane will lead to the formation of microcracks during drying and curing, and ultimately affect the quality of the membranes [9,17,18][9][17][18].
Additionally, the temperature for drying and curing the membrane also plays a vital role in the prepared membrane’s quality. Figure 7 shows the morphology of the zeolite T membrane using a SiC polished tubular mullite support (outer diameter = 12 mm, thickness = 1.5 mm, and average pore of 1.0 µm) that has undergone the drying and curing process at temperatures ~100 °C and ~150 °C, respectively [5]. As the drying and curing temperature increased to 150 °C, the top layer’s intensity is more robust than the membrane prepared at 100 °C. 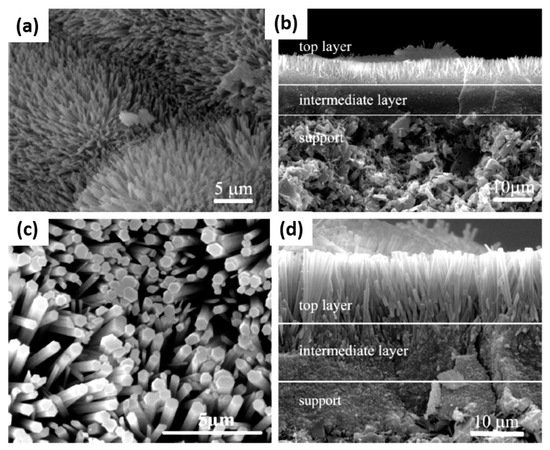 In synthesizing the zeolite T, several aspects are taken into account to achieve the high purity of zeolite crystals. By using the conventional method of hydrothermal treatment, it is proven to produce zeolite T, with respect to SiO2/Al2O ratios, temperature, time, alkalinity, and pH, with or without SDA. However, if the synthesis is aided with assistance methods, such as microwave irradiation or sonication, the time taken to produce a similar quality of zeolite T is effectively less. Modification of zeolite T into a membrane has been possible via secondary growth and has improved the potential for further performances towards gas selectivity and permeability. Meanwhile, under certain conditions, zeolite T can develop and coexist with other zeolite phases (treated as impurities), as this phenomenon does affect the performance of zeolite T.
Finally, we hope that this review will contribute to the emergence of a new exploitation of zeolite T, both in synthesis and applications, which will provide extensive information about the interrelation on the evolution phase of zeolite T, L, and W, and more.