The STAT proteins bind to specific response elements on the DNA in the nucleus, thereby inducing gene transcription. Based on their various functions, STAT proteins are essential in several health conditions such as autoimmune diseases and cancer. Despite their broad spectrum of activity, only STAT3 affects embryonic development, as shown in STAT3 knock-out mouse experiments.

The protein family “signal transducers and activators of transcription” (STATs) are transcription factors first described at the beginning of the 1990s while investigating the cytokine signaling pathways [1][2]. The protein family comprehends STAT1, STAT2, STAT3 , STAT4, STAT5a, STAT5b, and STAT6, encoded by different genes on different chromosomes [3]. These STAT proteins are involved in multiple biological processes such as immune response, mitogenesis, wound healing, cell survival, and cell growth by transmitting signals from the cell membrane into the nucleus [3][4]. The STAT proteins bind to specific response elements on the DNA in the nucleus, thereby inducing gene transcription. Based on their various functions, STAT proteins are essential in several health conditions such as autoimmune diseases and cancer [5][6]. Despite their broad spectrum of activity, only STAT3 affects embryonic development, as shown in STAT3 knock-out mouse experiments [7]. Different groups of signal proteins, including interleukins (e.g., IL-4 and IL-6), interferons (e.g., IFN-α/β), growth factors (e.g., EGF), and proteohormones (e.g., prolactin) activate STAT proteins [3].

In this review, we focus on the role of STAT proteins in metastatic prostate cancer (PCa) and summarize the current state of research regarding their involvement in metastatic castration-sensitive and castration-resistant PCa.

PCa is the second most common cancer in men, with an estimated number of over 1.4 million new cases worldwide in 2020 and it is one of the leading causes of death in men, with an estimated 375,000 cancer-related deaths yearly [8]. PCa is androgen-dependent, requiring testosterone and its metabolite dihydrotestosterone (DHT) for growth and development. Consequently, androgen withdrawal causes reduced cell growth and induces apoptosis [9][10]. For locally confined PCa, radical prostatectomy and external beam radiotherapy are the treatment options with curative intent. However, in the setting of metastatic disease, metastatic hormone-sensitive PCa first-line therapy includes androgen deprivation therapy (ADT), or ADT combined with an antiandrogen (e.g., apalutamide, darolutamide, and enzalutamide), taxane-based chemotherapy (e.g., docetaxel, cabazitaxel), or the CYP17A1 inhibitor abiraterone [11]. Regrettably, after a median response duration of 18 months, most tumors develop ADT resistance and progress to castration-resistant PCa (CRPC) [12]. Therefore, treatment for CRPC includes antiandrogens, taxane-based chemotherapy, and abiraterone [11]. Since 2020, olaparib, a poly (ADP-ribose) polymerase (PARP)-inhibitor, has been EMA approved for the treatment of BRCA1 and BRCA2 positive mCRPC [11]. Unfortunately, despite treatment, the median survival of CRPC patients is only 19 months in average post castration resistance due to tumor progression and development of therapy resistance [13]. Therefore, new therapeutic targets and strategies are necessary for mCRPC.

3. Characterization of STAT Family of Proteins

The ND mediates protein–protein interactions, like dimerization and tetramerization, and nuclear import of STAT proteins [3]. The CCD is involved in the nuclear translocation processes and interactions with regulatory proteins such as IRF9, c-JUN, and SMRT [3][14][15][16]. The DBD is highly conserved in all STAT proteins [17][18]. The domain facilitates the association of STAT proteins with palindromic DNA-binding sites, primarily the “Interferon-Gamma Activated Sequence “(GAS) and the “Interferon-Stimulated Response Element “(ISRE), located in the promoter region of the target genes. Just as the ND and CCD, the DBD is involved in nuclear import and export of STAT [3]. The LD affects mainly the transcriptional activity of STAT proteins. However, the domain is also involved in the DNA-binding and nuclear export processes. The SH2 domain is essential for the binding of STATs to their membrane-bound receptors. This domain is phosphorylated at its tyrosine residues mediating protein dimerization [3][19]. Moreover, it is also involved in the nuclear export processes of STAT proteins. The Y segment is the smallest domain of STAT proteins and has a specific tyrosine motif for every member of the STAT protein family [3]. The tyrosine residues point outward in folded STAT proteins and can be phosphorylated, enabling STAT proteins to dimerize by their SH2 domains. The C-terminal TAD plays an essential role in mediating the transcriptional activity of STAT proteins. It is variable in its sequence and length and holds various conserved serine-phosphorylation sites, mandatory for the interaction with different coactivators [3]. Furthermore, it has a central role in the ubiquitin-mediated degradation of STAT proteins [20]. 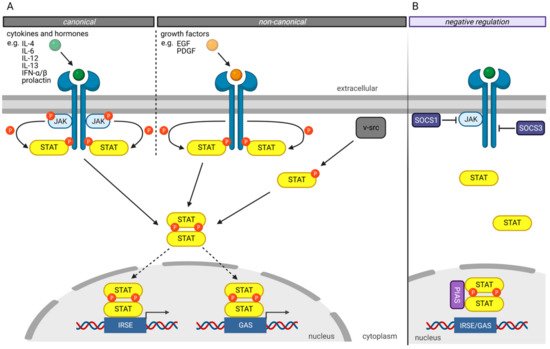 Figure 1. Schematic illustration of different ways of STAT activation and negative regulation. (A) STATs are activated by phosphorylation. In the canonical JAK/STAT pathway, extracellular binding of cytokines or hormones to cytokine receptors activates receptor-associated JAKs, which then phosphorylate STATs. Non-canonical signaling includes growth hormone receptors, like the EGF-receptor, which can phosphorylate STATs directly. Furthermore, viral oncoproteins, like v-src, activate STAT constitutively. Phosphorylated STATs form homo- or heterodimers and translocate to the nucleus. They regulate gene expression by binding to IRSE or GAS in the promoter region of their target genes. (B) Negative regulation of JAK/STAT pathway includes inhibition of JAK proteins by SOCS1, whereas SOCS3 binds to JAK-proximal sites on transmembrane receptors and inhibits binding of STATs to receptors. PIAS binds to STAT dimers in the nucleus, thereby inhibiting their transcriptional activity. (Created with BioRender.com, accessed on 10 September 2021).

Several mechanisms have been developed to negatively regulate the JAK/STAT pathway to prevent hyperactivity of the STAT transcription factors ( Figure 1 B) [3]. The “Suppressor of cytokine signaling” (SOCS) proteins are crucial in negatively regulating the JAK/STAT pathway, whereby different mechanisms have been described [22][23]. For example, SOCS1 binds directly to JAK proteins and inhibits their catalytic activity [24]. In contrast, SOCS3 binds to JAK-proximal sites on transmembrane receptors, inhibiting JAK activity and simultaneously preventing STAT from binding to these receptors [24].

In human PCa tissue, STAT5a/b is more frequently active in primary PCa during ADT and is also active in 95% of hormone-refractory PCa specimens with ADT [31]. In addition, STAT5 increases the transcriptional activity of the AR by influencing protein stability in PCa cells in vivo and in vitro [31][32]. Furthermore, active STAT5a/b protects antiandrogen-liganded AR from proteasomal degradation, while STAT5a/b knockdown combined with antiandrogen treatment enhances proteasomal degradation of AR followed by suppression of tumor growth [33].

in vitro studies revealed a possible role of STAT6 in cell survival as siRNA mediated STAT6-knockdown-induced apoptosis in metastatic PCa cell line DU145. Moreover, the STAT6 knockdown could be linked to the decreased ability of PCa cell lines to migrate, an essential step in tumor migration and metastasis [34]. Furthermore, IL-4 increased the clonogenic potential of primary PCa cell lines, which could be reversed by treatment with selective STAT6-inhibitor AS1517499 [35], indicating IL-4/STAT6 involvement in the clonogenic ability of PCa cells [36]. Additionally, several miRNAs were found acting as tumor suppressors while suppressing tumor growth, inducing apoptosis, or inhibiting metastasis in PCa by targeting STAT6, thereby underlining the cancer-promoting functioning of STAT6 in PCa [37][38][39]. Eventually, the transcriptional activity of STAT6 is up-regulated by AnxA2, which itself is suggested to be involved in PCa metastasis [40].

Current data describe STAT6 as an essential factor in metastasis in PCa, but its exact role in tumor progression is still largely unknown, and further investigation is needed.