The plant pathogenic bacterium Ralstonia solanacearum, causal agent of the devastating bacterial wilt disease, is a soil-borne microbe that infects host plants through their roots. The initial mutual recognition between host plants and bacteria and the ensuing invasion of root tissues by R. solanacearum are critical steps in the establishment of the infection, and can determine the outcome of the interaction between plant and pathogen.

Ralstonia solanacearum is one of the top ten plant pathogenic bacteria worldwide according to its scientific and economic importance [1]. R. solanacearum is the causal agent of bacterial wilt disease in more than 250 plant species, including agriculturally important crops such as tomato, potato, banana, and peanut [1][2], and can also infect model plants, such as Arabidopsis thaliana (hereafter, Arabidopsis) and Medicago truncatula [1]. As a soil-borne pathogen, R. solanacearum enters plants through the root, using wounds, root tips, and secondary root emerging points as penetration sites; it then progresses via the root cortex, finally reaching the vascular system [3][4][5], as shown in Figure 1. From this point onwards, and mostly through xylem vessels, the infection spreads systemically in the plant [5][6]. The invading bacteria multiply massively in the xylem and produce abundant exopolysaccharides (EPSs), which ultimately leads to the obstruction of the vessels and the subsequent development of the typical wilting symptoms due to impaired water conductance [7]. 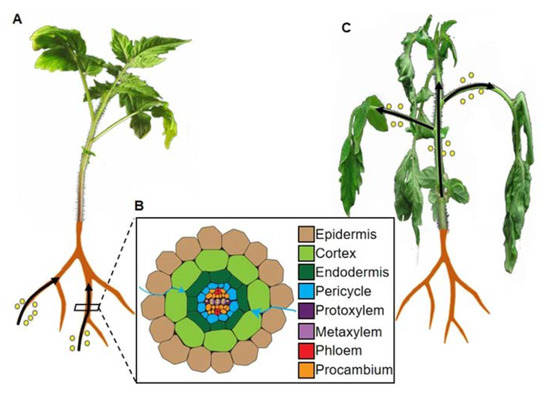 R. solanacearum is a devastating pathogen with a dramatic economic impact worldwide. Gaining a deeper understanding of the molecular and physiological mechanisms underlying the pathogenicity of this bacterial species is a necessary stepping stone in the design of effective and durable strategies for crop protection in order to guarantee food security. Considering that R. solanacearum is present in the soil, the initial recognition between host plants and bacteria and the ensuing invasion of root tissues are crucial steps in the establishment of the disease, and as such deserve special attention. In this minireview, we will focus on the early stages of the bacterial infection, providing an overview of the defence mechanisms deployed by the host plants upon recognition of the bacteria, of the manipulation exerted by the pathogen in order to promote its own multiplication and spread, and of the developmental changes occurring in the root system during bacterial colonization.