Bradoriids and the Cambrian Diversification

Bradoriids, among the earliest arthropods to appear in the fossil record, are extinct, ostracod-like bivalved forms that ranged from the early Cambrian to the Middle Ordovician. Bradoriids are notable for having appeared in the Cambrian fossil record before the earliest trilobites, and considering their rapid ascent to high genus-level diversity, provide key data for our understanding of the evolutionary dynamics of the Cambrian Explosion. This paper presents a broad review of bradoriid paleobiology.

Bradoriids enter the fossil record before the first trilobites (shortly before the appearance of trilobites of the Abadiella Biozone) [[3][4][5]], and as such provide important data regarding the dynamics of the Cambrian Explosion. They are among the earliest arthropods recognizable in the fossil record [[6]]. Plausible inferences suggest that bradoriids may have an even earlier (pre-Atdabanian or Cambrian Stage 2) history [[6]], with Williams and coauthors [[5]] assuming that bradoriids had undergone significant evolution before their near simultaneous appearance in different parts of the world.

This pattern of early appearance and rapid diversification in bradoriids has been remarked on since Raymond C. Moore’s 1961 diagram entitled “Stratigraphic distribution of archaeocopid ostracodes (sic)” [[7]], which shows 75% of the dozen listed genera as appearing at the base of the Cambrian. Paleontological interest has been building for the group, showing an accelerating increase in described genera in recent decades (Figure 1). The raw data for this graph are the description dates in the section of this article on bradoriid genera, as seen below. 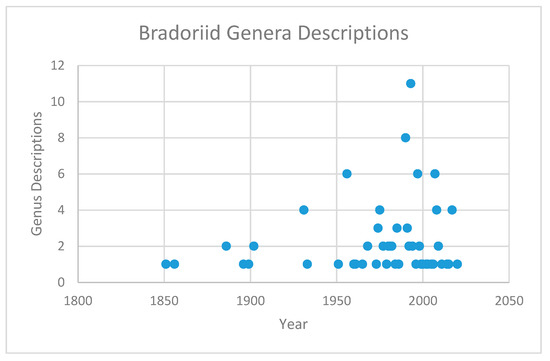 The structure of the data in Figure 1, even after accounting for differences over time in the way bradoriids are studied, is interesting, showing a distinction between “background” descriptions and “mass descriptions”, the latter reflecting primarily the publication of major monographic studies. Mass descriptions have generated increasing peaks in new genus descriptions, with a recurrence interval of roughly 25–35 years. Background descriptions remained steady for a century then began to climb steadily beginning in the 1960s. Neither background nor mass descriptions appear to have reached a plateau, suggesting that many more bradoriids remain to be discovered.

Bradoriids show an interesting pattern of diversification and extinction that ends in the Middle Ordovician [[2]]. Along with trilobites, they constitute part of a dual rapid diversification that is an important element of the Cambrian Explosion [[5]]. A spindle diagram of bradoriid diversity at the genus level (Figure 2; data from [[2]] and the section below on bradoriid genera) shows an explosion of diversity in Cambrian Stage 3, followed by a general decline in diversity (with the exception of a late diversification in late Stage 5 or Wuliuan) until the Early Ordovician. 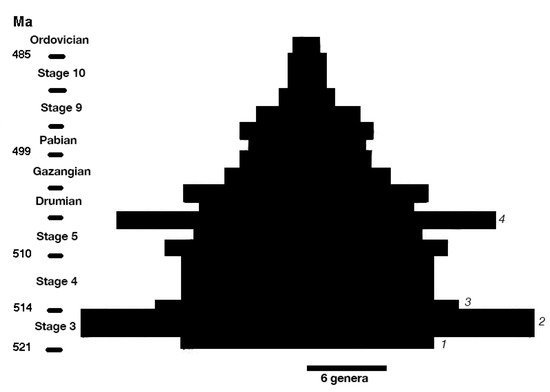 Figure 2. Genus-level bradoriid diversity during the Cambrian and Ordovician. Geological dates in million years (Ma). Stages refer to stages of the Cambrian. Numbers to the right indicate diversification waves 1–4. Data from [[2]] and “Bradoriid Genera” section below.

Fossil bivalved arthropods in general “provide a powerful tool to investigate the origins and dynamics” of evolutionary diversification [[9]]. A closer look at the bradoriid diversification in Cambrian Stage 3 reveals some interesting evolutionary dynamics. If we read the bradoriid fossil record literally in Stage 3, we see three waves of diversification during the Cambrian Arthropod Radiation Isotopic Excursion (CARE [[2]]). Each of these radiation bursts (named here Waves 1–3, with the late Wuliuan radiation as Wave 4) consists of a mix of relatively short-lived genera and long-lived genera (Table 1). Short-lived genera are largely confined to a single Cambrian stage, whereas long-lived taxa have ranges that extend significantly beyond a single stage (see Figure 4 in Williams et al. [[2]]).

These successive episodes of diversification, here called “waves”, are interpreted as actual evolutionary events rather than artifacts of monographic swelling, as stratigraphic control [[2]] seems sufficient to allow recognition of closely spaced diversification events. An alternate view, namely, that all of these ranges actually extended to the same temporal/stratigraphic horizon [[6]] remains plausible and should not be dismissed out of hand in spite of the problems (in terms of phylogenetic telescoping, that is, originations of putative ancestor and descendant taxa piling up on the same stratigraphic horizon) that it poses for understanding the Cambrian evolutionary event [[10]].

The proportion of long-lived taxa originating during successive “waves” shows a general (if not monotonic) decrease from Cambrian Stage 3 to Wuliuan, dropping from an initial 45% to 8%. This is interesting because it would seem to be the inverse to the usual evolutionary expectation, namely, that later diversifications should generate longer-lived taxa, as more time had elapsed to allow improvements to the general “competitiveness” of the taxa involved.

To explain the interesting pattern noted in the previous paragraph, one might argue that, with the Cambrian predator revolution [[11]] underway, it was becoming more difficult for new bradoriid lineages to survive over the long term. This does not explain, however, why Wave 1 generated such a proportionately large number of long-lived taxa. The founder effect may have some explanatory power here; however, a putative founder effect does not explain why some of the very first bradoriid genera remained competitive over the (relative) long term in the face of three additional waves of new taxa. Proffering an explanation based on ‘environmentally-cued polymorphism’ [[9]] would not explain how Waves 1–3 came to be so closely spaced, seemingly without sufficient time to allow successive rapid diversifications.

Bradoriids apparently went extinct sometime during the Ordovician [[12]]. Some representatives may have persisted until the end-Ordovician extinction, although the latest records are Middle Ordovician and include a Siberian form (with the marvelously alliterative binomial) Chegetella chegitunica [[13]].