Classroom active desks refer to the desks placed in the classroom and can be moved in teaching activities. This entry was to examine the effects of active desks in the school setting on sedentary behavior, physical activity, academic achievements and overall health among children and adolescents aged 5–17 years.

In children and adolescents, it has been found with device-based measurements that daily sitting time takes over 50% of the waking day at 7 years and 75% at 15 years [13]. This high level of sedentariness, combined with the fact that about 80% of children and adolescents are inactive (i.e., not reaching the physical activity recommendations) [14][15], led some scientists to propose the existence of what they called a “Sedentary & Inactive” profile [16]. Not only physical inactivity and sedentary behaviors have been found to be associated with early metabolic and cardiovascular risk in children and adolescents [17][18][19][20][21], they have also been found to be related to a decrease in cognitive performance and academic achievements [22][23][24].

Knowledge and behaviors developed during childhood have been shown to influence their future behaviors as adults [25]. In particular, children’s physical activity and sedentary behaviors have been shown to not only determine their actual health but also their adolescent and adult behaviors and health [26]. Since children spend at least one third of their waking time in class [27], school appears as an ideal setting to promote health and induce behavioral change [28]. Targeting school time and the school place to promote healthy active behaviors necessitates however to face the highly sedentary nature of the children’s class time. In that context, the literature shows a growing number of experiments trying to implement interventions aimed at breaking and reducing this sedentary time during class [29][30]. The use of active desks in the classroom (e.g., standing desks, sit-to-stand desks, cycling desks, stability balls) has been especially studied [31][32][33][34], with studies showing for instance that sit-to-stand desks seem to reduce sedentary time in the classroom [31] or increase energy expenditure with the use of bike desks [34]. These studies are providing some promising results and our aim is to conduct a systematic analysis of these works to have a better understanding of their effects.

A literature search was conducted for studies from year 1990 to October 2020 using the following electronic bibliographic databases: PubMed, ScienceDirect, ResearchGate, Google Scholar and Medline (Cochrane Library). The search terms included the key words “desk* or workstation* or work station” AND “treadmill OR pedaling OR cycling OR bicycl* OR bik* OR active OR exercise ball* OR swiss ball* OR stability ball* OR dynamic seating OR active sitting OR standing OR stepping OR stand up OR position, standing OR standing position* OR sit-to-stand OR sit stand OR stand/sit OR stand biased OR adjustable furniture OR height adjustable” AND “school* OR class* OR child* OR student* OR academic institution”. To identify articles potentially missed during the literature search, reference lists of candidate articles were reviewed.

The PRISMA flow diagram presented in Figure 1 summarizes the study selection process. The search strategy initially found a total of 1677 references after removing duplicates. A total of 1635 articles were excluded after screening of titles and abstracts. Full text copies were obtained for 44 articles; of which 25 articles matched the inclusion criteria and were thus included in this systematic review. The main reasons for studies exclusion among the remaining were: (1) study design did not meet inclusion criteria (n = 8); (2) intervention did not use an active desk (n = 5); (3) population was not children without health issues (n = 3); (4) full texts were not available (n = 2); and (5) active desks were already integrated in classroom (n = 1). One article included two different study designs [31]. 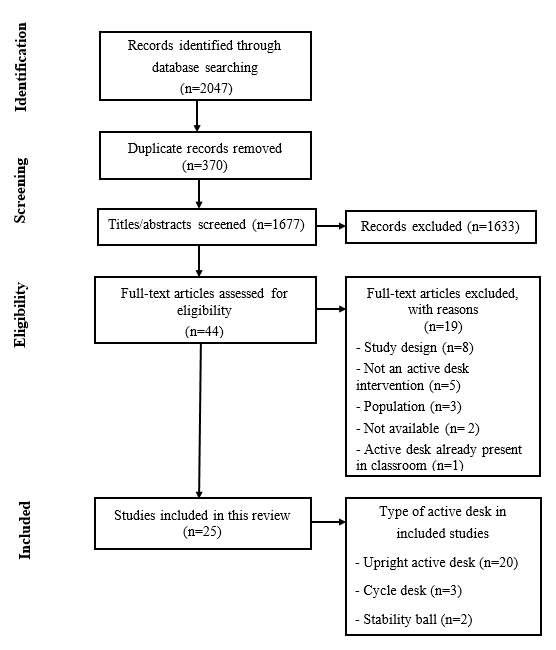 Six studies assessed body composition when using upright active desks [35][47][36][37][48][39] and one with cycling desks [34]. However, one study did not detail their results on this outcome [35] (Table 6). Wendel et al. [39] found a significant difference in BMI for interventional group compared to the control group after two years of intervention (−5.24 for BMI percentile) (Table 3). Other studies did not report any change in BMI with the use of an upright active desk.

Thirteen articles using upright active desks assessed sedentary behaviors [31][32][41][37][43][52][51][44][53][45][54][38][46], while only one used cycling desks [30]. As presented in Table 3, two studies observed that children, when using upright active desks, spent significantly less time sedentary than the control group, using objective measurements [43][54]. Other studies did not find any difference for the interventional group [52][45]. Moreover, Ee et al. [32] observed no significant difference for whole day sedentary time but reported a significant reduction in sitting time during school hours for the intervention group compared to the control group. Similar results have been reported in four other articles [31][37][53][45]. Additionally, four studies reported a reduction of sitting time between T0 and T1 for the intervention group [37][43][44][50]. Similar results have been found in another study but were not statistically significant [52][53].

Fedewa et al. [30] reported a decreased of 9.5% in sedentary time for the intervention group compared to the control group.

For light physical activity, four studies reported no significant changes for interventional group compared to the control group [32][51][53][40][55]. For MVPA, studies found contradictory results while two studies did not find any change [32][52]. Kidokoro et al. [43] observed a significant increase in MVPA for the intervention group between pre- and post-intervention. Another study [54] found that MVPA decreased for the intervention group during school years but less than the control group. Additionally, they reported that the benefit of upright active desk was greater among students initially determined as less active.

Regarding step counts, Benden et al. [47] reported an increase of this outcome without statistical analyses (Table 3 and Table 6). In another study, they reported similar results at mid intervention but not at the end [36]. No significant effects were observed in two other studies [48][51]. In the article of Clemes et al. [31], the study in Australian school reported no significant effect while the British ones showed an increase for the intervention group in post intervention.

For stepping time a significant decrease was reported for the intervention group [38] or no effect [31][46]. One study [44] observed a significant increase while Clemes et al. [37] found similar results but no statistical analyses have been reported.

Physical capacities were only evaluated in one study that used cycling desks [34]. The authors reported an increase in the performance during the 20 m shuttle run test in their interventional group compared to the control group (+0.6 interval) (Table 3). Moreover, there was a significantly lower rate of perceived exertion (RPE) in the interventional group compared to the control group after 22 weeks. For cardiometabolic health, only Clemes et al. [37] assessed blood pressure with the use of an upright active desks. They reported an increase in systolic blood pressure in the interventional group but the authors did not perform statistical analyses (Table 2 and Table 4).

Seven studies assessed cognitive and academic performance when using upright active desks [37][49][52][44][45][38][39], two studies with cycling desks [34][50] and two with stability balls [33][40]. Concerning executive functions (working memory, inhibitor control, cognitive flexibility), visual working memory was assessed in two studies using upright active desk and two studies using cycling desks and no change was reported [34][45][39][46]. As detailed in Table 4, inhibitory control has been assessed in three studies, and the use of cycling desks shown to significantly increase the inhibitor control in the intervention group compared to the control group with an higher increase of accuracy for the intervention group (4.21%) [50]. One of the studies that used upright active desk reported an improvement in both reaction time and accuracy [46] while the other reported no significant change [49]. The reaction time for cognitive flexibility decreased after intervention in the study that used upright active desks [46]

Regarding to academic engagement and attention, two studies using upright active desks reported an increase in the intervention group compared to the control group [41][42] without any change in concentration and classroom management [33][37][38]. A study using stability balls reported more interaction time with teachers but the time working with other students or independently were reduced compared to the control group after intervention. Both groups observed improvement in mathematics and literacy but they were not related specifically to the intervention [40]. Mehta et al. [49] assessed several outcomes where they primarily observed a significant increase in cognitive performance with the use of upright active desks compared to traditional ones.

It was determined by the review team that a meta-analysis was not possible due to high levels of heterogeneity across studies; narrative syntheses were employed instead. The overall quality of the included studies was low due to methodological inconsistencies, in addition of the heterogeneity in terms of statistical and clinical characteristics (Table 2 and Table 3).

N/A: not applicable; Other bias included any potential conflict of interest in studies.

Table 3. Association between the use of active desks and outcomes of included studies for the systematic review.

Active desks appear as a promising tool to reduce sedentary behaviors in school environment. In the present state of knowledge, the effects of all active desks appear not equivalent, mainly due to the difference in body activation and energy expenditure. Regarding the relatively low number of available studies and the high degree of heterogeneity in terms of quality, design and methods, comparisons and conclusions remain difficult at the moment. The present systematic analysis calls for further well-designed studies to better understand the effects of the use of active desks among children and adolescents in order to inform policy and practice.