The growing knowledge of receptor profile expression in Neuroendocrine neoplasms (NENs) has led to synthesis of several chimeric molecules targeting multi-receptors, with a particular interest for SSTs and DRs due to the functional interactions between these receptors. On these assumptions, novel chimeric compounds, embracing somatostatin and dopamine features, were developed opening new routes for NENs treatments.

Neuroendocrine neoplasms (NENs) are a rare family of tumors that arise from neuroendocrine cells. These cells are widely dispersed all over the human body and their main function is hormone secretion. NENs can seriously compromise organs homeostasis and quality of life of patients due to the excessive secretion of hormones able to generate disabling symptoms, specific syndromes and other complications [1][2][3]. Somatostatin and dopamine play a relevant role in the regulation of hormone secretion in several neuroendocrine cells. Therefore, both somatostatin and dopamine analogs have been successfully tested for their high anti-secretory activity in symptomatic patients with NENs. Moreover, emerging evidence of antiproliferative activity of somatostatin analogues (SSAs) was provided by two clinical trials PROMID and CLARINET [4][5]. SSAs are the first-line medical therapy for well-differentiated NENs [6]. Due to the robust effect on prolactin (PRL) and growth hormone (GH) secretion inhibition, also dopamine agonists (DAs) were intensively studied in NENs [7][8]. Moreover, the relevant role of both somatostatin and dopamine systems is currently exploited for the diagnosis (68Ga-DOTATATE and 18F-DOPA PET) and peptide receptor radionuclide therapy (177Lu-DOTATE) of metastatic and inoperable NENs [6]. The effects of SSAs are mediated by several somatostatin receptors (SSTs) [9]. Analysis on expression pattern of both SSTs and dopamine receptors (DRs) were performed in several NENs showing their co-expression. Interestingly, formation of heterodimers between SSTs and DRs was found to be associated with an enhanced activity bringing new insight for NENs treatment [10]. Speculating on these data, chimeric molecules harboring somatostatin and dopamine features have been developed [11].

The first chimeric compound was synthetized by Ipsen Biomeasure, Inc. (Milford, MA, USA). This molecule, named BIM-23A387, combines structural elements of both SSAs and DAs. Based on above mentioned studies on receptor expression profile, BIM-23A387 retains affinity for SST2 and D2R (full agonist for both receptor). Savenau et al. [11] demonstrated that BIM-23A387 was more effective than either BIM-23023 (full agonist for SST2) or BIM-53097 (full agonist for D2R), either alone or in combination, in suppressing both GH- and PRL secretion in primary pituitary adenoma cells from patients previously treated with octreotide and/or quinagolide (a selective D2R agonist). The reason for the enhanced potency seems to be related to the heterodimerization of SSTs and DRs creating a novel receptor with distinct functionality. In 2003, another study analyzed mechanisms of action of BIM-23A387 in both human and rat pituitary adenoma primary cells. Ren et al. [12], showed that D2R antagonist, but not SST2 antagonist, abolished the SST2-active component of BIM-23A387 to inhibit GH secretion. In addition, the structure of the D2R/SST2 heterodimer might be different from the individual receptor forms, since it showed peculiar features: the heterodimer binding domain had a higher affinity to DA-selective ligand and the intracellular signaling occurred mainly via SST2 pathways [12]. Interestingly, BIM-23A387 was more potent in GH and PRL suppression compared to BIM-23023, BIM-53097, cabergoline, octreotide, and lanreotide. Subsequently, Jaquet et al. [13] tested several somatostatin-dopamine chimeric molecules (BIM-23A758, BIM-23A760 and BIM-23A761) in cells from 18 human partially responsive GH adenomas. The best results in suppressing GH and PRL secretion have been observed with BIM-23A760. Its effect was higher also than the first chimeric BIM-23A387 molecule and octreotide [13]. These results were also confirmed by Savenau et al. [14]. In this last study the inhibitory effects of octreotide, cabergoline and other chimeric molecules, including BIM-23A760 were tested on GH secretion in a large series of primary cultures from human GH-secreting pituitary tumors. BIM-23A760 showed the highest inhibitory effect [14]. Florio et al. demonstrated that BIM-23A760 has a higher efficiency in suppressing primary NFPAs cell proliferation than octreotide and cabergoline alone or in combination [15]. Moreover, BIM-23A760 molecule showed promising results in PRL- and TSH-secreting adenomas, when its antisecretory effect was compared with BIM-23A387, cabergoline or octreotide in primary cell lines [16][17]. In contrast, no improved effect on chromogranin A (CgA) secretion in GEP NENs was found using any chimeric molecules when compared with cabergoline or lanreotide [18]. Nevertheless, BIM-23A760 showed a decreased activation of IGF-induced insulin-like receptor-A in BON-1 cell line [19]. BIM-23A760 showed a predominant D2R signaling in primary cultures of DA-resistant prolactinomas, since its action did not provide an enhanced response when SST2 was successfully overexpressed [20]. In primary cultures of pituitary acromegaly, BIM-23A758 showed less efficiency in suppressing GH [13], while Zitzmann et al. observed that this chimeric compound displayed a greater antitumor activity than BIM-23A760 through Akt and MAPK signaling inhibition in human midgut carcinoid cells (GOT-1) [21]. Nevertheless, BIM-23A760 seems to modulate ERK1/2 pathway, showing a higher antiproliferative action compared to bromocriptine on primary NFPA cell culture [22][23]. Subsequently, both BIM-23A760 and BIM-23A761 antiproliferative effects were tested on bronchopulmonary cell lines (NCI-H720 and NCI-H727), small intestine cell line (KRJ-I) and in primary NFPA cells [23][24]. BIM-23A761 showed antiproliferative effect in bronchopulmonary cell lines through c-Jun N-terminal phosphorylation, leading to Ki67 down-regulation and an increase expression of p21 cell cycle inhibitor. Interestingly, KRJ cell lines did not respond to any chimeric compound [24]. Very recently, Halem and colleagues tested the anti-tumor effects of BIM-23A760 through subcutaneous injection in a novel pro-opiomelanocortin knock out mouse model, which is able to spontaneously develop aggressive NFPAs. BIM-23A760 was able to nearly complete arrest tumor growth within eight weeks and its action was significantly higher than octreotide and cabergoline alone and in combination [25].

Unfortunately, this evidence about BIM-23A760 failed to bring positive results in clinical human trials. Although the compound showed a clean safety profile in phase I and a significant therapeutic efficacy in a phase IIa single-dose study in patients with acromegaly, after repeated administration, BIM-23A760 produced a long-lasting and highly potent dopaminergic metabolite. Circulating accumulation of this metabolite gradually reduced the effects of the parent compound BIM-23A760, compromising its GH suppression activity [26][27].

In order to overcome clinical limitations, recently, a novel chimeric compound named TBR-065 (formerly BIM-23B065), was synthetized by IPSEN Pharma (now in development by Tiburio Therapeutics, Cambridge, MA, USA). It is a full agonist at D2R and SST2 and a partial agonist at SST5. Testing its effects in vitro and in vivo TBR-065 showed a higher potency and efficacy in suppressing GH secretion compared with both octreotide and cabergoline (alone or in combination) in primary human pituitary adenoma cells from patients with partially octreotide-responsive acromegaly [28]. Furthermore, TBR-065 was shown to trigger apoptosis and to suppress hormones secretion and Ca2+ intracellular concentration in primary cell cultures from different pituitary tumors (ACTH-secreting adenomas, GH-secreting adenomas and NFPAs) [29] (Figure 1). In 2019, an interesting comparison between SSAs, DAs and novel chimeric compounds (BIM-23A760 and TBR-065) effects were performed in 2D and 3D of QGP-1 and BON-1 cell cultures models [30]. In this study, the authors showed that SST-D2R multi-receptor targeting drugs were able to inhibit CgA and serotonin secretion, but not cell growth [30]. Recently, we performed a preclinical study evaluating the antitumor activity of TBR-065 and lanreotide through both in vitro and in vivo models of medullary thyroid carcinoma. TBR-065 exerted a more relevant anti-tumor activity on human medullary thyroid carcinoma cell lines, when compared with lanreotide, through modulation of cell cycle, induction of apoptosis, and reduction in migration and calcitonin secretion. The zebrafish/tumor xenograft model, exploited in this study, did not show any effects on tumor-induced angiogenesis with both drugs [31]. Newly, the ability of TBR-065 to inhibit GH secretion from primary human GH or GH/PRLoma cells was compared with BIM-23A760, octreotide and cabergoline either alone or in combination. The authors showed that TBR-065 was the most efficient on GH suppression among them [32]. In another in vitro study, it was demonstrated that its main metabolite, BIM-23B133, has no binding to any SSTs and no interference with the chimera (TBR-065) activity [33]. Due to this analysis, TBR-065 appeared to be able to overcome one of the main limitations of the previous chimeric compound (BIM-23A760). Therefore, pharmacokinetics and pharmacodynamics, as well as safety and tolerability of this compound, were studied. The first human clinical trial was performed in 63 healthy male volunteers through subcutaneous injection of TBR-065. This phase I trial showed a significant reduction in GH, IGF-1 and PRL serum levels at doses upward of 0.4 mg. The main metabolite, BIM-23B133, did not interfere with the activity of TBR-065. Indeed, the inhibitory effects on secretion of GH, IGF-1, and PRL remained unaltered after 13 days of treatment with the new chimera [34]. Furthermore, the treatment was well tolerated with side effects mainly at high dosing regimens, specifically orthostatic hypotension (rarely vasovagal syncope), gastrointestinal disorders (abdominal discomfort, nausea and vomiting) and injection side reactions. An up-titration period of 6 days prevented the orthostatic effects, indeed side effects in the multiple ascending dose were less severe and no syncope was observed [34][35].

In the view of these findings, further research is needed for TBR-065, since it appears to be the most promising somatostatin-dopamine chimera with potential clinical applications in NENs. 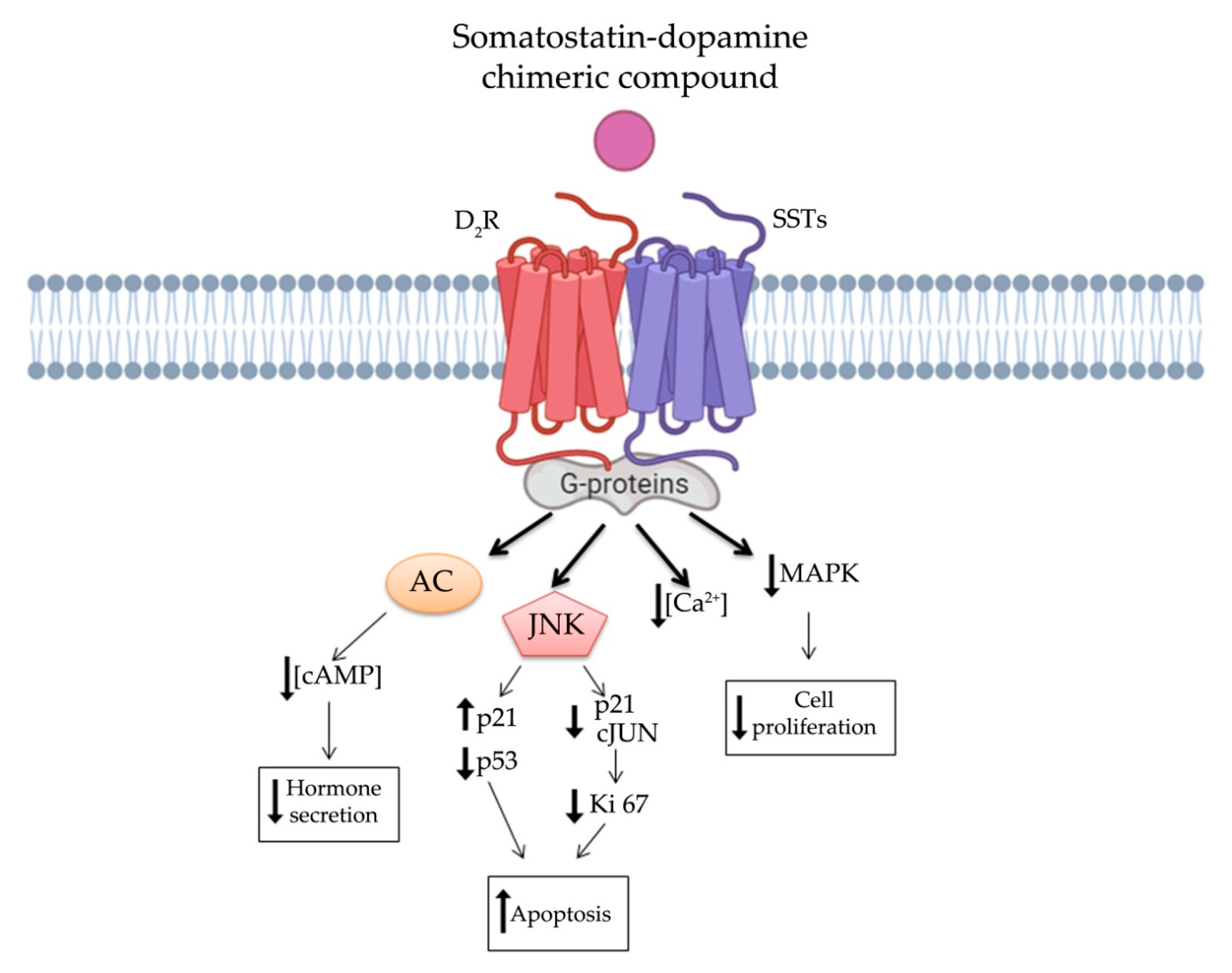 After almost twenty years from the development of the first somatostatin-dopamine chimeric molecule, prominent positive conclusions in the neuroendocrinology field can be drawn. First, it became clear the central role of SSAs and DAs in the therapy of well-differentiated NENs. Second, it has been observed that both SSTs and DRs displayed a large co-expression in several types of NENs. The most abundant receptors subtypes were SST2, SST5, and D2R. Interestingly, the formation of heterodimers between these receptors is associated with an enhanced antitumor activity. This evidence promoted the research for the development of new chimeric multi-target molecules. TBR-065 targeting SST2, SST5 and D2R appear to be a new molecule with relevant perspectives in the therapy of well-differentiated NENs, as shown by several preclinical and preliminary clinical studies. The great capability of TBR-065 to decrease in vivo GH, IGF-1 and PRL serum levels is encouraging.

Nevertheless, the knowledge of these chimeric molecules is leaving behind some outstanding questions which may be worth elucidating in further studies. For instance, both the hypothetical signal transduction pathway, that we have described in Figure 1, as well as a detailed binding affinity study for TBR-065 need to be well defined. Additionally, the binding affinity to D2R of available somatostatin-dopamine chimeric molecules is lower compared to that reported for the SST2. The development of new molecules with higher affinity for D2R could enhance the antitumor activity of these compounds.

In conclusion, despite the encouraging read-out about TBR-065, additional clinical studies are required to clearly define the safety, antitumor activity and the place of this molecule in the therapeutic algorithm of patients with NFPA, acromegaly, and advanced well-differentiated NENs.