The selenium (Se) is a crucial trace element for many living organisms, including soil microorganisms, plants, and animals including humans. The Se is taken up in the living cells of microorganisms, plants, animals, and humans in several inorganic forms such as selenate, selenite, elemental Se, and selenide. Biofortification of Se would help mitigation of Se deficiency in humans and animals.

Selenium (Se) is a micronutrient essential for the proper functioning of plants and animals [1][2]. It was first described by the Swedish chemist Jacob Berzelius in 1817, however, its biological role was not determined until the 1950s when overdoses were linked to cardiac muscle dystrophy and acute hepatic necrosis [3]. In 1973, the beneficial biological role of Se as a key constituent of glutathione peroxidase (GPx) was discovered; thus it contributes to protecting the body from stress-induced oxidative damage to living cells. Subsequently, it was found that Se is not only associated with GPx, it is also connected with numerous other enzymatic activities within organisms’ cells; for example, Se biological forms like SeCys and SeMet are key constituents of iodothyronine deiodinase, which is crucial in the healthy functioning of the endocrine system [1][4].

It is estimated that globally one billion people are facing Se insufficiency [5] since Se is essential for the good functioning of the human immune, endocrine and reproductive systems, and also links with the function of the human brain [6]. An earlier study revealed that prolonged Se deficiency in the human body negatively affects the cardiovascular system and can lead to myocardial infarction, i.e., heart attacks [7]. Besides these examples, Se deficiency is also associated with Keshan and Kashin-Beck diseases, which predominantly occur in children and women of child-bearing age [8][9].

Generally, Se is uptaken by humans through consumption of Se-enriched plant and animal products, in particular from plant sources. Plants take up Se from the soil as selenates [10], which are then converted into the organic forms SeCys and SeMet [11]. Increasing the concentration of Se in edible plants’ parts/products is a viable pathway to overcome human Se deficiency. Recently, Se-biofortification combined with improved agronomic, breeding, molecular, biotechnology, and genetic engineering approaches have been recognized as a leading tool to enrich plant-food products with Se. While there is a large, disperse body of literature on the roles and mechanism of Se in human health and its enrichment in plant foods, a comprehensive review covering all these aspects is lacking.

2. The Natural Form of Selenium and Its Deficiency and Toxicity Symptoms

Selenium (Se) is widespread across the Earth and is present in the atmosphere, lithosphere, hydrosphere and biosphere [12]. The weathering of rocks and the eruption of volcanic gases are key sources of Se into the environment. Additionally, the decomposition of Se-enriched organic matter, through biomethylation by microorganisms, maintains a positive flow of this element into the atmosphere [1]. These mechanisms contribute to the presence of volatile Se compounds, viz., hydrogen selenide (H2Se), dimethyl selenide (DMSe), and selenium oxide (SeO2). Globally, the Se content in arable soils ranges between 0.33 and 2 mg/kg [13]. Se-rich areas are known as seleniferous areas [14]. The Se concentration in soils varies depending on the management of the local environment and the presence of both Se-rich parent materials and microorganisms necessary for its release into the atmosphere [15].

The soils which have originated from igneous rock, granite, sandstone, and limestone are all rich in Se [16]. Conversely, soils in temperate and humid climates are generally low in Se. Irrespective of soil depth, the Se content in mineral-enriched soils fluctuates ~14 mg/kg [17]. Se-rich materials include berzelianite (Cu2Se), klaustalite (PbSe), and naumanite (Ag2Se) [18]. Anthropogenic activities, such as the combustion of fossil fuels, metal smelting, international shipping and the over-use of inorganic fertilizers are primarily responsible for additional contributions of Se into the atmosphere (and thus into agricultural soils), from the before mentioned minerals [17].

Se-rich soils have been observed in the United States, Russia, parts of China, Australia, Canada, and Ireland [4]. In contrast, New Zealand and a wide portion of Europe have soils which are largely Se deficient [1]. Tomza-Marciniak [19] calculated that Se deficiencies exist in more than 70% of countries. However, the total Se content in soil is not a reliable estimate of plant available Se or the amount of Se available to humans and animals through plants [20]. The Se availability of plants is determined by a large number of soil chemical and biochemical characteristics, including sorption, disruption, soil pH, presence of other nutrients and methylation [21]. For example, Se uptake is higher for plants high in sulfur [22]. Se-rich foods include seafood, eggs, chicken, nuts, mushrooms, and green vegetables including spinach, cauliflower, and cabbage. Se concentrations in humans vary with agroclimatic region and daily diet.

In water, Se is present in minute quantities as selenates or selenites. Groundwater contains higher concentrations of Se than seawater [16][18]. This is largely the result of runoff of Se-rich fertilizer from intensively managed agricultural soils, as well as Se secretion from parent rock material [23]. In potable water, 10 µg Se per litre of water is acceptable according to the World Health Organization [24].

Prolonged Se deficiency adversely affects the cardiovascular system, which may be a cause of myocardial infarction [16]. Se deficiency also causes Keshan and Kashin-Beck diseases, which primarily occur in childbearing women and in children who live in areas deficient in Se [25]. A moderate deficiency of Se in daily food habit reduces immunity, can impair the nervous system and may cause congenital hypothyroidism in fetuses [26]. Additionally, Alzheimer’s disease, depression and anxiety have been associated with prolonged Se deficiencies [27]. Se may contribute to the suppression of HIV and slow the progression to AIDS [28]. Se is also necessary for the developing fetus in women and animals [16][29]. An insufficiency of Se in the human diet affects the thylakoid gland and may lead to moodiness and the impairment of behaviors and cognitive functions [30][31][32]. Se deficiency reduces the activity of 5′-thyronine deiodinase enzymes, leading to low triiodothyronine concentration in blood. Moreover, a deficiency of Se accelerates human ageing [31].

The majority of Se-deficiency symptoms have been observed in animals when less than 0.1 mg Se is present per kg of animal diet. Most commonly, Se deficiency causes a myo-degenerative syndrome [32] Table 1, also known as white muscle disease (WMD), whereby animal muscles are pale in appearance [33]. WMD may occur in all livestock including birds, and most seriously damages the skeletal (fibres/highly elongated cells) and cardiac muscles [34]. The deficiency of Se also impairs an animal’s immunity [35]. The clinical signs of Se deficiency in animals include reductions in appetite, fertility and growth, as well as muscle weakness [36]. Specific Se deficiency symptoms include heart disease in pigs, placenta retention in cows, and birds both a higher embryonic mortality rate and muscular dystrophy [33][37].

Source: Information in Table 1 was collected from Gupta and Gupta [32] with permission.

2.3.1. Toxicity in Humans and Animals

Both excessive and insufficiency of Se are detrimental to human health. The consumption of higher doses of Se can be toxic. There is a narrow limit between safe-and-adequate Se uptake and overconsumption leading to toxicity. There are only limited reports on human Se toxicity; this may be because many commonly consumed foods are Se non-accumulators. The symptoms of Se toxicity are hair loss and skin and nail lesions [38], hypotension, tachycardia, muscle contractions dizziness, nausea, vomiting, facial flushing, tremors and muscle soreness. In extreme cases, acute Se toxicity can cause serious intestinal and neurological problems, heart attack, kidney failure and death [39]. Excessive Se uptake can also damage the mucus membranes of the digestive tract, and lead to ongoing nausea, diarrhoea and also increase risk of type 2 diabetes [38]. In the case of animals, the death of poultry due to Se toxicity in wheat grains used as chicken feed was reported in South Dakota, USA [40].

The limit between safe and toxic amounts of Se is small and has yet to be standardized in many geographical locations. The recommended dietary allowance of Se varies in humans with age, gender, pregnancy and lactation Figure 1. Pregnant or lactating women require higher 9% and 27% daily amounts of Se than other women [41]. Human beings must consume around 55 micrograms of Se per day and not exceed the maximum limit of 400 micrograms per day [42]. The World Health Organization recommends a daily average intake of 55 µg of Se, while the recommendation is varied with age, gender, diet and geographic location [43]. The International Food and Nutrition Board has recommended an average daily intake of 40–70 µg Se and 45–55 µg Se for men and women, respectively, and 25 µg Se for children [2][44]. A daily dose of 55–200 µg of Se is recommended for healthy adult humans [45][46]. Table 2 illustrates the maximum recommended daily Se intake limits, above which symptoms of Se-toxicity such as significant hair loss and abnormal nail growth appear [41]. 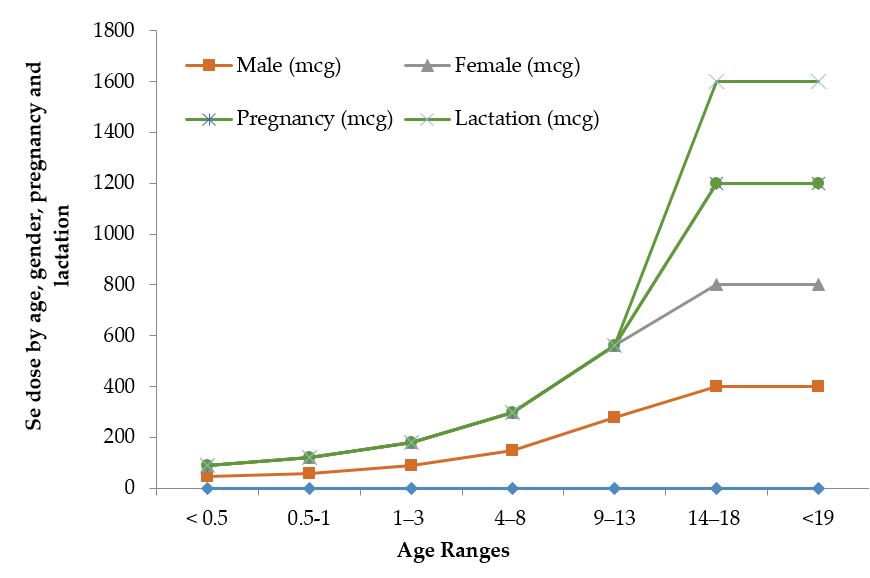 Source: The information in Table 2 is collected from IMFNB [41] with permission. * Breast milk, formula, and food should be the only sources of selenium for infants.

In case of the available forms Se, Ríos et al. [47] regarded that >40 μmol Se/L of selenate as toxic, while Hawrylak-Nowak [48] estimates that safe concentrations of Se are between 20 and 15 μmol/L for selenate and selenite, respectively. However, Ríos et al. [49] reconsidered and set an upper limit of 80 μmol Se/L.

Toxic levels of Se within plant tissues are greater than 5 mg/kg [50]. Se toxicity does not occur when selenate is applied at rates between 10–200 g Se per ha, which are commonly recommended for wheat biofortification. Se is usually not considered essential for taller plants, while soils low in Se are considered to neither inhibit plant growth nor reduce crop yield [50][51]. However, some research has indicated the beneficial effects of low doses of applied Se on crop performance. For example, increased growth of ryegrass (Lolium perenne) and lettuce (Latuca sativa) was recorded when crops were fertilized with Se and exposed to UVB radiation. Low-dose applications of Se are useful for crop plants only when they are under oxidative stress, otherwise, this microelement is not essential.