A maxillofacial prosthesis, an alternative to surgery for the rehabilitation of patients with facial disabilities (congenital or acquired due to malignant disease or trauma), are meant to replace parts of the face or missing areas of bone and soft tissue and restore oral functions such as swallowing, speech and chewing, with the main goal being to improve the quality of life of the patients.

Maxillofacial prosthesis production for the rehabilitation of patients with facial disabilities (congenital or acquired due to malignant disease or trauma) is often challenging and complex, depending on the type of defect. These prostheses are meant to replace parts of the face, such as the nose, ear, eye and surrounding tissues or missing areas of bone and soft tissue, restoring oral functions such as swallowing, speech and chewing, with the main goal being to improve the quality of life of the patient [1].

Conventional procedures for maxillofacial prosthesis manufacturing involve several complex steps which are costly, time-consuming, very traumatic for the patient and rely on the skills of the maxillofacial team, dental clinician and maxillofacial technician [2].

The complexity of conventional maxillofacial prosthodontics production requires several weeks and a great number of visits by the patient for try-ins, functional and esthetic adjustments [3]. For most patients, surgical correction is not an option, and the extent of their defects induce a lack of self-confidence, impairing their daily activities and social lives [4].

Despite their great role in the social integration of the patients and preserving anatomical structures after surgical treatments, maxillofacial prostheses, being classified as cosmetic devices, are not covered by health insurance in many countries. The conventional fabrication protocol has a great number of limitations, primarily related to the high technical expertise required, time, effort, and cost, plus retention and esthetic problems, making it less accessible to the global patient community. Only a small number of these patients can afford the high cost of the prosthesis, and even fewer of them can get access to such sophisticated devices in a timely manner.

Advancements in the fields of computer-aided design (CAD) and computer-aided manufacturing (CAM) and the implementation of these technologies in medicine offered new methods for design and construction, and new options for materials and technologies were rapidly introduced in all dental fields [5]. However, many aspects of these technological advancements have still not been entirely functional for maxillofacial prosthetic rehabilitation [6][7] despite the acute necessity for reducing production costs, shortening the time, improving comfort and increasing patients’ accessibility.

The present scoping review aimed to perform an update on the digital design of maxillofacial prostheses, emphasizing the available methods of data acquisition for the extraoral, intraoral and complex defects in the maxillofacial region and assess the software used for data processing and part design.

2. Classification of the Maxillofacial Defects

For clarity and a more comprehensive description of maxillofacial prosthesis reconstruction, the defects were classified as extraoral (missing nose, eye, orbit, ear or face parts), intraoral (missing parts of the maxilla, middle face and mandible) and complex (missing extraoral and intraoral anatomical parts), as shown in Figure 1. For the intraoral maxillary and midface defects, Brown and Shaw classification, based on the vertical extent defect measure (classes I–VI) and the horizontal extent defect measure (a–d), was used [8]. For mandibular defects, Cantor and Curtis classification, proven to be useful for guiding surgical and prosthetic rehabilitation [9][10][11], was considered.

Figure 1. (A) Classification of the maxillofacial defects in extraoral, complex and intraoral cases (including extraoral complex and intraoral prostheses). (B) The intraoral maxilla and midface defects, classified according to Brown and Shaw classification in six classes [8]: vertical classification, with a maxillectomy not causing an oronasal fistula (I); not involving the orbit (II); involving the orbital adnexae with orbital retention (III); with orbital enucleation or exenteration (IV); with an orbitomaxillary defect (V); and with a nasomaxillary defect (VI), and for horizontal classification, only a palatal defect not involving the dental alveolus (a); less than or equal to a half unilateral (b); less than or equal to a half bilateral or transverse anterior (c); a greater than half maxillectomy (d). (C) The intraoral mandibular defects, classified according to Cantor and Curtis classification in six classes [10][11]: radical alveolectomy with preservation of mandibular continuity (I); lateral resection of the mandible distal to the cusp area (II); lateral resection of the mandible to the midline (III); lateral bone graft and surgical reconstruction (IV); anterior bone graft and surgical reconstruction (V); and anterior mandibular resection without surgical reconstruction (VI).

3. Digital Versus Conventional Workflow for Maxillofacial Prosthesis Design and Manufacturing

A conventional workflow for maxillofacial prosthesis production includes the following steps (Figure 2). An accurate impression of the area requiring prosthesis is achieved by selecting a suitable impression material (hydrocolloid alginates or elastic silicone polymers are the most-used materials) according to the type of defect, size and presence or absence of any undercuts in the respective area, with a custom tray often being required. Some anatomic undercuts are blocked so as to remove the impression without damaging the surrounding tissue. After pouring the impression, the gypsum cast is obtained, and a wax model of the anatomic part to be replaced is fabricated. For reproducing the natural morphological details of the defect, the wax is carved, followed by a try-in of the maxillofacial prosthesis wax-up with the corresponding adjustments for marginal fit and esthetic appearance. The molds are produced using the final retouched wax-up by applying the lost wax method, where gypsum is poured over the wax model and the wax is then simply removed with hot water [12]. The final prosthesis is obtained using the adequate material. For intraoral and complex defects including a part or the complete dental arch, an impression of the opposite arch and the mounting in a semi-adjustable articulator is also necessary before the try-in. Complex defects, including intraoral and extraoral missing anatomical parts, require the use of materials with different characteristics, such as acrylic resins or silicones. 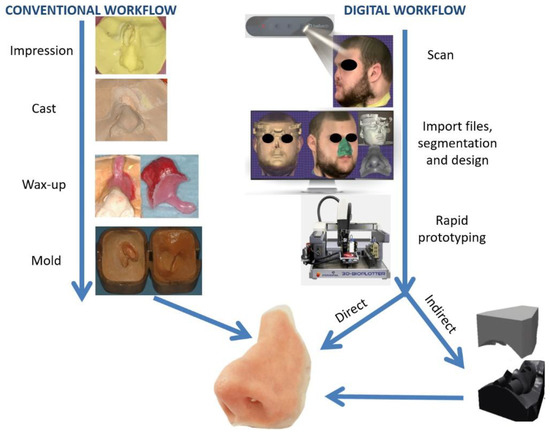 Figure 2. Comparison of conventional and digital workflows for nasal extraoral prosthesis manufacturing. For the conventional technique (left), an impression is taken of the defect and surrounding tissue, followed by a casting and wax-up of the prosthesis with a holding support for facilitating the try-in, creating the mold. For the digital technique (right), 3D scanning is performed with a Bellus Arc 1 facial scanner, followed by importing the files into a computer-aided design (CAD) program, designing the prosthesis and printing the mold (indirect path) or the final nasal prosthesis directly using a 3D printer.

The design of the external or internal maxillofacial prosthesis is obtained using a wide variety of existing CAD programs and software suites, either open-source (OS) or commercially available (CA). Rapid prototyping, particularly additive manufacturing, is used to obtain the final prosthesis. Maxillofacial prostheses, be they external, internal or complex according to the proposed digital workflow and the material utilized, are manufactured indirectly by obtaining a model of the prosthesis or the mold, followed by the conventional workflow for anatomic part processing, or directly by 3D printing with adequate material (e.g., silicone-based elastomers and acrylic resins, among others) (Figure 2).