With the ever-growing energy storage notably due to the electric vehicle market expansion and stationary applications, one of the challenges of lithium batteries lies in the cost and environmental impacts of their manufacture. The main process employed is the solvent-casting method, based on a slurry casted onto a current collector. The disadvantages of this technique include the use of toxic and costly solvents as well as significant quantity of energy required for solvent evaporation and recycling. A solvent-free manufacturing method would represent significant progress in the development of cost-effective and environmentally friendly lithium-ion and lithium metal batteries.

Li-ion batteries are a well-established and mature technology that has spread to almost, if not all, of our portable devices. Li-ion batteries are based on the insertion/deintercalation of lithium ions inside the electrode, more specifically into inorganic materials commonly called active materials due to their role inside electrodes. Such batteries have conquered the battery market as they present several advantages compared to other battery types like alkaline or lead-acid batteries. Li-ion batteries have higher specific power and specific energy and show an increased cycle life [1]. For these reasons, this technology is one of the most promising for use in the developing electric vehicle (EV) market. Mostly due to the high demand in the automotive industry for EVs, the fabrication of Li-ion batteries has drastically increased and is predicted to rise even more in coming years. The creation of batteries requires the formulation and manufacturing of an electrolyte and electrodes, the latter being made via the solvent-casting method. For an electrode, this classical process is based on pre-dissolving a polymer into an organic, usually toxic, solvent. The different particles, which are the conductive carbons and the active material are then added in order to make a slurry. This slurry is casted onto a current collector thanks to the doctor-blade technic. A good representation of this technic can be seen in Marks et al.’s publication [2]. The final step to obtain a solid electrode is to evaporate the remaining solvent, usually thanks to heat and vacuum. The increasing production of batteries therefore raises the issue of using more environmentally friendly and cheaper processing methods that do not require the use of solvents.

2. Safety Issues Related to the Use of Liquid Electrolytes

Hence, research on all-solid-state batteries is very active due to the high potential of these devices to be the batteries of tomorrow. Although the race has been centered on creating new high-performance polymer-based electrolytes or electrodes, the other concern in the community is the processes that are used to make these components. Though the solvent-casting method is the most common process for making porous and non-porous electrodes as well as polymer-based electrolytes [6][7][8], several groups have been working on new processes to replace the use of solvents. The solvent-casting technique raises the potential issues of a time consuming drying step [7] and the presence of residual solvent [9][10][11] which can be detrimental to battery performance and safety (presence of water with Li metal or coordination of water at the surface of ceramics that are in the hybrid electrolyte [12]). Moreover, this process is limited to making thick electrodes and the long drying time can lead to the agglomeration/sedimentation of particles resulting in non-homogenous samples, decreasing the performance of the electrolyte or the electrode [13]. Also, solvent evaporation leaves pores which are unnecessary in solid electrolytes and electrodes used in all-solid-state batteries [14]. Solvent-free preparation of polymer-based electrolytes and electrodes has emerged as a response to these limitations. (Figure 1) 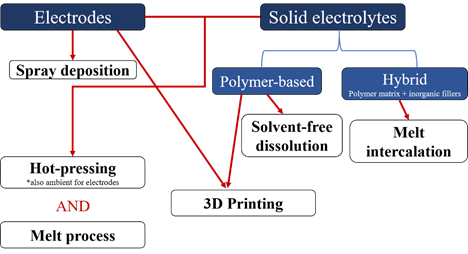