Intensive and prolonged exercise leads to a rise of troponin concentration in blood. The mechanism responsible for troponin release during exercise remains ill-defined. The study aim was to search for risk factors of troponin increase after a prolonged endurance competition. Methods: The study included a group of 18 amateurs, healthy volunteers (median age 41.5 years, interquartile range – IQR 36–53 years, 83% male) who participated in a 100 km running ultra-marathon. Information on demographic characteristics, pre- and post-race heart rate, blood pressure, body composition and glucose, lactate (L), troponin T (hs-TnT) and C reactive protein (hs-CRP) concentration were obtained. Additionally, data on L and glucose levels every 9.2 km and fluid/food intakes during the race were collected. Results: There was a significant hs-TnT increase after the race exceeding upper reference values in 66% of runners (from 5 IQR 3–7 ng/L to 14 IQR 12–26 ng/L, p < 0.0001). None of the baseline parameters predicted a post-race hs-TnT increase. The only factors, correlating with changes of hs-TnT were mean L concentration during the race (rho = 0.52, p = 0.03) and change of hs-CRP concentration (rho = 0.59, p = 0.01). Conclusions: Participation in a 100 km ultra-marathon leads to a modest, but significant hs-TnT increase in the majority of runners. Among analysed parameters only mean lactate concentration during the race and change in hs-CRP correlated with troponin change.

Regular physical activity leads to many health benefits including cardio-protective activity [1][2]. Recent guidelines of the European Society of Cardiology have increased the recommended weekly volume of moderate to vigorous exercise from 150 min to 210–420 min as optimal cardiovascular prevention [3]. However, there is a group of athletes who far exceed these recommendations by engaging in long-lasting training and ultra-endurance competitions. The effects of these extreme forms of exercise on health are much less studied [2].

Bouts of intensive or long-lasting exercise (such as marathons or ultra-marathons) have been shown to increase blood levels of cardiac troponin, a known selective marker for myocardial injury and a major component of a current diagnosis of myocardial infarction [4][5][6][7]. Troponin rise after exercise is usually discrete with levels returning to reference values within hours [8] and may be accompanied by an increase of natriuretic peptide levels and transient decrease of left or right ventricular systolic function without long-term consequences [9][10][11][12]. In line with that, recent studies with new imaging techniques demonstrated that intensive endurance training does not seem to promote myocardial fibrosis [6][13][14][15].

It is believed that cardiac troponin released after endurance exercise comes from the cytosolic pool and does not signify injury to contractile parts of the cardiomyocytes [4][7]. However, the exact mechanism explaining troponin rise related to physical activity remains ill-defined [4][7]. It has been previously related to athletes age and experience, exercise duration and intensity potentially influencing dehydration, inflammation or pH imbalance during the exercise [4][7]. More detailed knowledge of the risk factors of this form of troponin increase could help in understanding the mechanism behind this phenomenon. They may also improve differential diagnosis in case of post-exercise suspicion of the coronary events in athletes [5][7].

Therefore, we aimed to search for risk factors of troponin increase after participation in a 100 km ultra-marathon in middle-age, amateur healthy runners.

Table 1. Correlation between change in hs-TnT and analysed parameters.

We have demonstrated that participation in a 100 km marathon leads to a significant increase of hs-TnT beyond upper reference limits in 66% of runners. High-sensitivity troponin T measured with a fourth-generation assay, as in our study, is a cardio-selective marker and its increase is believed to have purely cardiac and not skeletal muscle origin [4]. However, it should be noted, that maximal values of post-race hs-TnT in studied runners remained within low probability range of acute coronary syndrome suspicion [5].

Figure 1. Example of lactate and glucose fluctuations during the race and running pace in one of the runners. L—lactate, Glu- glucose. 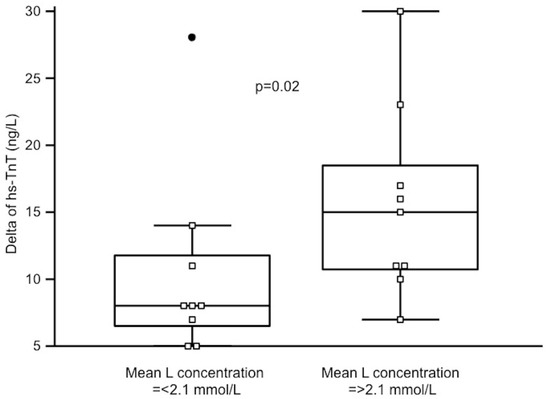 Figure 2. Changes of high-sensitivity TnT (hs-TnT) in runners with mean lactate (L) concentration during the race below and above the median. A black dot on the left is an outstanding result in one of the runners.

Participation in a 100 km ultra-marathon leads to a modest, but significant high-sensitivity troponin T increase in the majority of runners. Among analysed parameters only mean lactic acid concentration and change of high-sensitivity C reactive protein correlated with the change of troponin level.