The elevated concentrations of various trace metals beyond existing guideline recommendations in water bodies have promoted research on the development of various electrochemical nanosensors for the trace metals’ early detection. Inspired by the exciting physical and chemical properties of nanomaterials, advanced functional nanocomposites with improved sensitivity, sensitivity and stability, amongst other performance parameters, have been synthesized, characterized, and applied on the detection of various trace metals in water matrices.

The key factor to mitigating trace metals pollution and keeping the water quality up to standard is the early detection of trace metals within the environmental water bodies [1]. Undoubtedly, the global economic expansion and industrial developments necessary to meet demand and the continued sustainability of human lives have been appreciated worldwide. At the same time, the discharges from the increased chemical processes, agricultural processes, and energy conversions, amongst other applications, have elevated water pollution. These anthropogenic processes have been observed to be the major contributors to the elevated concentrations of trace metals in water bodies [2][3][4][5][6]. The statistics published by the World Health Organization (WHO), based on the 2017 figures, pronounce that 785 million people lack basic drinking-water services, including 144 million people who are dependent on surface water. Globally, at least 2 billion people use a drinking water source contaminated with faeces, leading to the transmission of diseases such as; diarrhea, cholera, dysentery, typhoid, and polio, amongst others. It is well known that a class of essential trace elements, such as; zinc (Zn), copper (Cu), molybdenum (Mo), selenium (Se), chromium III (Cr), cobalt (Co), manganese (Mn), amongst others, play significant roles in nutrition balance and other biological aspects [7][8]. However, their excessive ingestion above the maximum permitted guidelines provided by the World Health Organization (WHO) may lead to various adverse effects ranging from acute to chronic impacts, depending on the type, species and level of exposure [9][10]. Another class of toxic trace metals, comprised of mercury (Hg), arsenic (As), thallium (TI), tin (Sn), antimony (Sb) and lead (Pb), amongst others, are poisonous and provide minimal health benefits even at trace levels [7][11]. To avoid a trace metal-based catastrophe, the amount of trace metals, predominantly toxic trace metals, in environmental water bodies ought to be frequently monitored and regulated. Traditional methods for the detection and monitoring of trace metals in water bodies include, but are not limited to, spectrometric techniques such as; inductively coupled plasma-optical emission spectrometry (ICP-OES) [6], inductively coupled plasma-mass spectrometry (ICP-MS) [12], flame atomic absorption spectroscopy (FAAS) [13], graphite furnace atomic absorption spectroscopy (GFAAS) [14] and x-ray fluorescence (XRF) [15]. However, these techniques require sample collection, sample pre-treatment, high energy input, pure gas input, infrastructure and skilled engineers, scientists, or technicians to operate the instruments [6][12][13][14][15][16]. As an alternative to these techniques, electroanalytical devices, particularly electrochemical sensors, have been identified as potential candidates for the low cost, sensitive and selective detection of trace metals in environmental water bodies [17][18][19]. Nowadays, nanomaterial technology plays an important role in providing opportunities and possibilities for the development of a new generation of sensing tools [20][21]. Considering their low cost, high efficiency, multiple functionality, flexibility, selectivity, and sensitivity, nanosensor devices account for the shortcomings encountered by the traditional analytical detection techniques [22]. Due to the incorporation of nanomaterials into their working electrode systems, significant enhancements on the sensitivity and selectivity of electrochemical nanosensors, amongst other performance parameters, have been reported [23]. It is without any doubt that the properties of nanomaterials, such as; the shape, size, aggregation/agglomeration state, size distribution, crystallinity and defect structure, play a significant role on the electrode’s performance in electrochemical sensors [24][25][26]. Tuning/engineering the nanomaterials on the surface of the electrode enables the detection of various toxic trace metals simultaneously or independently [27][28]. In the past few decades, extensive research has been carried out on electrochemical sensors incorporating engineered carbon [29][30], transition metals [31][32], and transition metal oxide/hydroxide [33][34] nanostructured materials as recognition elements, with promising results reported. To this end, three major strategies, including the engineering of active sites, engineering the electronic conductivity, and constructing a porous structure in nanomaterials, have been identified to improve the electrode’s surface chemistry and therefore enhance the electrode’s performance [35][36][37][38].

Nanosensors are sensing devices that are dependent on the unique properties of nanomaterials to recognize and detect the behavior of matter within a given environment at the nanoscale to macromolecular level [22]. These sensing devices can be large or small devices that utilize the nanomaterials incorporated as recognition elements to detect changes at a nanoscale [39]. The sensing mechanism follows either the optical, electrochemical or mechanical route of detection [22][40], as a result of the combination of the recognition element and the detector used as illustrated in Scheme 1. Evidently, as key technological and economic drivers, various nanosensors have been developed for the detection of chemical and toxic gases, food packaging, medical diagnostics, and water quality monitoring, amongst other applications [41][42][43]. Interestingly, the recognition element has been identified amongst these applications as the key element giving the identity of the nanosensor [44]. Owing to their unique physico-chemical properties enhancing the signal detection, nanomaterials have been incorporated as recognition elements in sensors [22]. Nanomaterials allow for the amplified binding of target molecules on their available active sites, which lead to detectable signals [44]. It is worth noting that if the recognition element is a nanostructured material, then a nanosensor is obtained [22]. To this end, various classes of nanostructured materials ranging from carbon-based nanomaterials to organic-based nanomaterials, inorganic-based nanomaterials, and nanocomposite materials (incorporated in Scheme 1) have been synthesized and deployed in the afore-mentioned applications [41][42][43]. Various synthetic methods for the synthesis of these classes of nanomaterials are outlined in the next section. 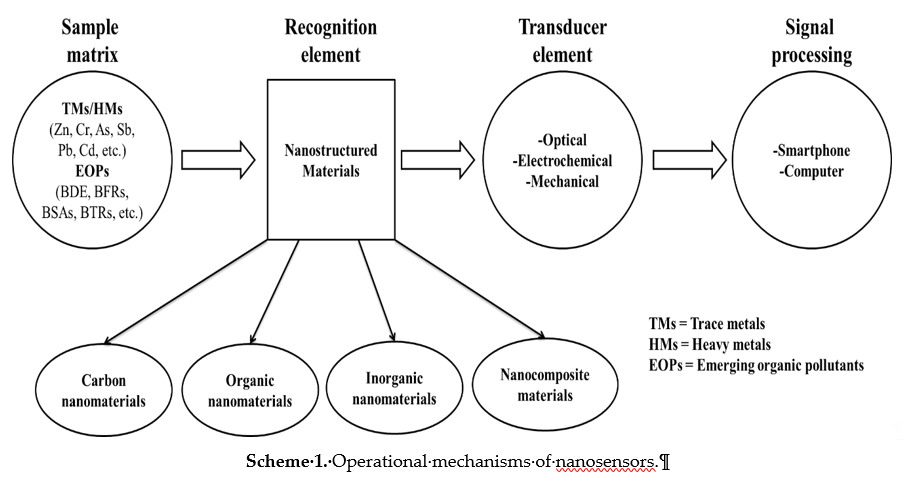 Nanomaterials properties such as; high surface area-volume ratio, dimensionality (<100 nm), high adsorption surface area, high mobility of particles, reproducibility of the particles, uniformity, composition, rapid/delayed particle agglomeration and high electric/heat conductivity are crucial in nanosensors [45][46]. Miniaturization of the nanomaterials improves the surface-to-volume ratio of nanomaterials, resulting in variations in chemical, mechanical, optical, and magnetic properties, resulting in the increased sensitivity and specificity in nanosensors [47][48]. The nanomaterials synthesis method is therefore crucial for improving the performance of the nanosensors. Moreover, synthesis methods leading to the production of uniformly distributed particles and consistent shapes are necessary to improve the linearity and the detection limits of the nanosensor, amongst other performance parameters [47]. There are two common approaches for the synthesis of nanomaterials, namely top down and bottom up methods [49]. Common top down methods involve mechanical methods such as; mechanical grinding, high energy ball milling, mechanical alloying, reactive milling and lithography [16]. Common bottom up methods include chemical methods such as; hydrothermal, co-precipitation, microemulsion, sol-gel, chemical-vapor deposition, electrodeposition, epitaxial growth, and colloidal dispersion [50].