Experimental and theoretical studies of either characterization and reactivity of ionic and excited species with atoms, molecules, and radicals of interest in the chemistry of plasmas and energy production. Single and ionized species with single or multiple charge (H+, He+, H3+, HCO+, H3O+, He22+, CO22+, etc.), excited atoms and molecules (e.g. O(1D), N(2D), H*(2s2S1/2), He*(21,3S0,1), N2*(A3Σu+), etc.) play a crucial role in various important chemical systems such as flames (i.e. chemi-ionizations), natural plasmas (i.e. planetary ionospheres, comet tails and interstellar clouds), and biological environments (e.g. damaged biological tissues via the interaction between ionizing radiation and living cells).
Such processes are very interesting from a fundamental point of view in Physical Chemistry and attracted the attention of a wide scientific community, since many applications to important fields: radiation chemistry, plasma physics and chemistry, combustion processes, development of laser sources. In particular, the conversion of waste carbon dioxide via assisted plasma technology gained recently increasing interest due to the possibility of obtaining value-added products, like gaseous or liquid fuels. Such characteristics make this an encouraging strategy for the storage of electrical energy from renewable sources into chemical energy in a circular economy scheme.

The research work is focused on applying the method of velocity map imaging to crossed beam studies of ionic reactions important in planetary atmospheres and in interstellar clouds. A recent publication from our group has reported an imaging study of the charge transfer and bond formation reactions in the C+ + NH3 reactive system, important in molecular clouds. We have also completed studies of dissociative charge transfer and bond formation in the systems N+ + CH4 and N2+ + CH4, which initiate ion processing in the atmosphere of Saturn's moon Titan. Recently, we have studied other important reactions involving H3+ ions, one of the most important ionic species in Astrochemistry: the charge-transfer and proton-transfer reactions of CH3 radicals with H3+ ions.

The scheme of the experimental set-up is reported in the following figure.

The experiments we have performed to date involve point-by-point reconstruction of the center of mass flux distributions with one-dimensional scans in laboratory coordinates. The possibility of detecting all velocity space elements in a single time window promises to increase the capabilities of the crossed beam technique significantly. Our lab has developed an instrument (schematic shown above) that gives us the capability to image velocity space distributions.  The diagram shows that the locus of points of reaction products with a constant center of mass speed is a sphere whose radius increases with time. Imaging the set of nested spheres describing the reaction products by projecting them on a plane allows all product velocity elements to be observed in a single time window. The application of imaging methods based on multiplex (Fellgett) advantage will enhance product detection sensitivity by more than an order of magnitude. Initial studies on the ion processing chemistry important in the atmosphere of Titan are underway, and the goal of this project is to study reactions of cations and anions with simple free radicals as we have done in the case of H3++CH3 reaction.

Some pictures of such an experimental apparatus are reported below.

Considering that a basic step in the chemical evolution of planetary atmospheres and interstellar clouds (where about 89% of atoms are hydrogen and 9% are helium) is the interaction of atoms and molecules with electromagnetic waves (γ and X rays, UV light) and cosmic rays, the formation of excited metastable species like He* and Ar* (argon is the third component of Earth and Mars’ atmosphere) by collisional excitation with energetic target particles (electrons, protons, or alpha particles, coming from the solar wind) and the possible subsequent Penning ionization reactions, could be of importance in these environments. It has to be stressed that the effect of Penning ionization has not yet been fully considered in the modeling of terrestrial and extraterrestrial objects, even though metastable excited species can be formed in such environments. Our research aims to highlight Penning ionization as an important route of formation for ionic species in upper planetary atmospheres. Our goal is to provide relevant tools to researchers working on kinetic models of atmospheric interest, in order to include Penning ionization in their calculations as fast processes promoting reactions that cannot be neglected. Ions are extremely important for the transmission of radio and satellite signals, and they govern the chemistry of planetary ionospheres. Molecular ions have also been detected in comet tails. The effect of Penning ionization still has not been considered in the modeling of terrestrial and extraterrestrial objects so far, even, though metastable helium is formed by radiative recombination of He+ ions with electrons. Because helium is the second most abundant element of the universe, Penning ionization of atomic or molecular species by He*(23S1) is plausibly an active route of ionization in gaseous environments exposed to cosmic rays.

Below are reported: a scheme (left panel) and a picture (right panel) of the Penning ionization apparatus. 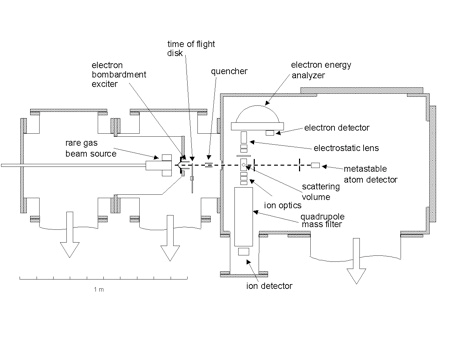 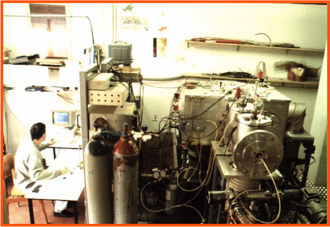 By using such an apparatus we are able to record energy spectra of the emitted electrons (Penning Ionization Electron Spectroscopy – PIES) obtained in our laboratory in a crossed beam experiment. These spectra are compared with photoelectron spectra measured by using He(I) and Ne(I) photons in the same experimental conditions. In this way we can obtain the negative energy shifts for the formation of [Rg---M]+ ionic complexes in their accessible electronic states (where Rg = He, Ne, Ar, and M is an atomic or molecular target). Recorded energy shifts indicate that the Rg*-M autoionization dynamics depends on the features of the transition state [Rg---M]* of such reactions, like the intermolecular potentials characterizing the approach between the incoming Rg*-M collisional partners, the preferential geometry giving rise to the reaction, and the involved molecular orbitals in the autoionization mechanism. Furthermore, the quantitative analysis of PIES energy shifts, performed with our semiclassical method, provides a detailed picture of the basic features of the transition state for such reactions. In particular, the analysis of the PIESs permits us to directly probe specific cuts of the potential energy surface of major relevance for the stereodynamics of elementary reactive events leading to ionic products in different electronic states.

3. Production and characterization of molecular dications

The aim of such a research is to characterize the role of molecular dications M2+ (where M is a molecule) i) in the Chemistry of the upper atmosphere of the Earth and of other planets of the Solar System, and ii) as species able to storage a high energy content at a molecular level that, in principle, could allow them to be used as alternative propellants. Our experiments are performed at the ELETTRA Synchrotron Light Laboratory (Trieste, Italy) using the ARPES (Angle-Resolved Photoemission Spectroscopy) end station of the GasPhase Beamline. They consist in the double photoionization of the neutral molecular precursor by using a tunable synchrotron light beam, and detecting the stable molecular dications and the fragment ion products, coming out from its possible Coulomb explosion, by coupling photoelectron-photoion-photoion-coincidence and ion imaging techniques.

Below are reported: a scheme (left panel) and a picture (right panel) of the electron-ion extraction and detection system used for the photoelectron-photoion-photoion coincidence measurements. 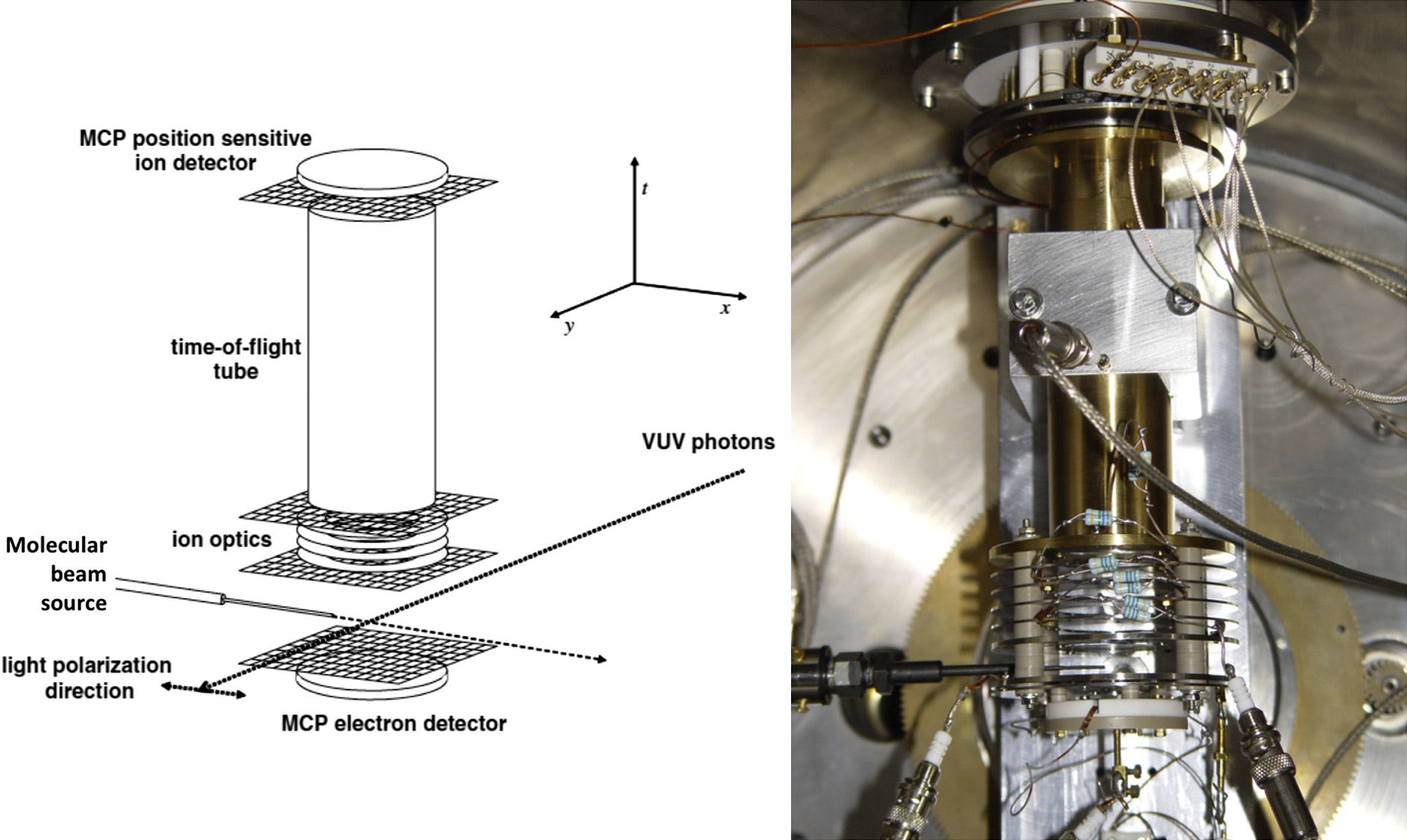 The aim of our work is to stimulate the research in the field of the chemical physics characterization of planetary atmospheres in order to fully consider in a deeper effort the possible formation of molecular dications in the modeling of such environments. These doubly charged species may be produced in planetary ionospheres by the double ionization of a neutral precursor induced by cosmic rays, UV photons, X-rays. After their formation, by Coulomb explosion they can produce fragment ions having a high kinetic energy content able to allow them to escape into space, as we have recently demonstrated in the case of the atmosphere of Mars and Titan.

4. Methane production by CO2 hydrogenation reaction with and without solid phase catalysis

An open important challenge in the research field of possible strategies using low cost or renewable energy is to design and develop a heterogeneous/homogeneous catalysis processes reusing waste CO2 to produce methane in a circular economy scheme. For such a purpose is crucial to realize an optimized yield methanation stage in which hydrogen reacts with carbon dioxide to produce methane and steam water. Currently, the methanation process is used in a laboratory prototype apparatus that we have developed and recently installed in an external box located at the Department of Civil and Environmental Engineering of Perugia University. Such an apparatus, named ProGeo 20kW, can be seen in the figure reported below, and is working based on the well known Sabatier reaction

performed at high pressure (2-3 atm) and high temperature (200-300°C) with the use of a solid phase catalyst (nickel, ruthenium, or alumina). 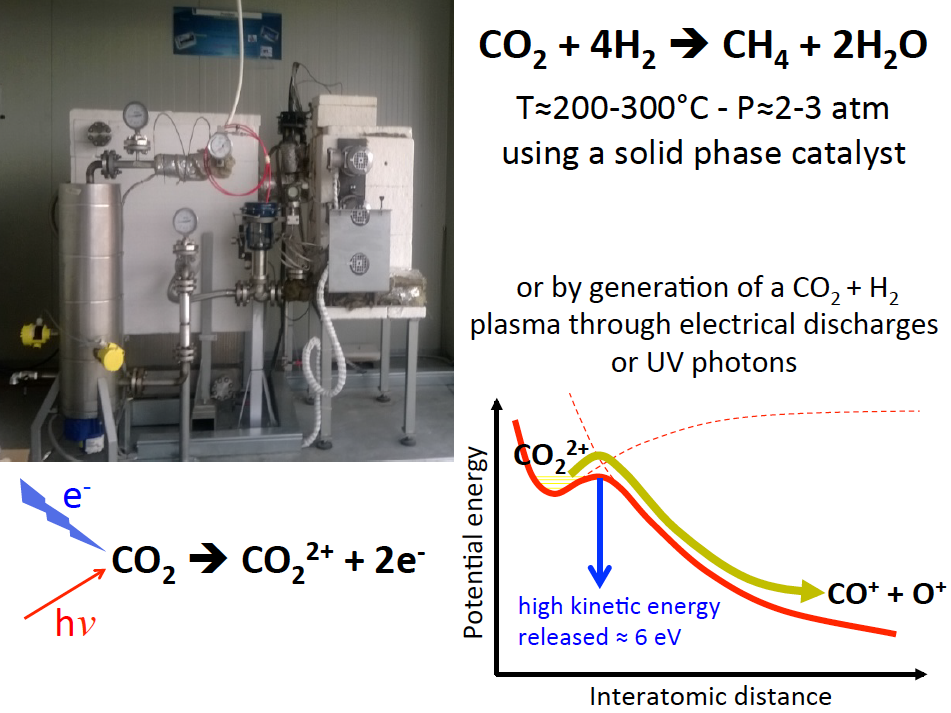 Leveraging on the experience gained by designing and assembling the ProGeo prototype, we are developing an alternative innovative cost effective and contaminant resistant synthetic strategy based on the replacement of the solid phase catalysis with a homogeneous gas phase process. The aim of our research is to find new efficient methanation pathways in order to explore alternative reaction mechanisms involving the CO2 hydrogenation through a plasma generation by electrical discharges on a CO2+H2 gas mixture producing intermediate CO22+ molecular dications.