Transmission of plant viruses is a complex virus–vector–host interplay tuned in the course of evolution. This process is basically of two types, one specified by the requirement for a virus helper component protein (HC), which serves as an ‘adaptor’ between the virus capsid protein (CP) and a receptor in the vector, and the other by the direct interaction of the assembled CP with a vector receptor [1][2][3]. The helper strategy was first discovered and studied in depth for aphid transmission of cauliflower mosaic virus (CaMV) [4][5][6][7][8] and the members of the Potyviridae family [9][10]. A classic example of the capsid strategy is cucumber mosaic virus (CMV, family Bromoviridae), a small icosahedral virus composed of 180 identical CP subunits whose aphid transmission depends solely on the capsid protein [11][12].

In the process of evolution, a number of plant viruses have developed peculiar capsid proteins providing for interactions with the vector. Thus, CaMV, apart from the nonvirion helper component, employs the capsid protein p3 for semi-persistent aphid transmission. The capsid protein readthrough domain (CP-RTD), being a minor component of icosahedral virions, mediates persistent, circulative aphid transmission of luteoviruses. Likewise, benyviruses encode the CP-RTD exposed at one end of the rod-like helical particle, which serves for the virus transmission by soil fungal zoospores. Closteroviruses encode several CPs and virion-associated proteins that form a complex structure of the filamentous helical particles and provide for the transmission by aphid, whitefly, or mealybug vectors. This review focuses on variable transmission strategies and evolutionary ‘inventions’ of the unusual capsid proteins of plant viruses. An insight into the transmission mechanisms of these viruses is not only of fundamental but also of practical interest in view of significant economic losses from diseases such as beet rhizomania [13], cereal yellow dwarf [14][15], beet yellows, and citrus tristeza [16].

Cauliflower mosaic virus, a plant pararetrovirus, has a circular 8-kbp DNA genome and icosahedral particles (approximately 50 nm in diameter) built of 420 CP subunits [17]. After the virus enters the cell, the DNA is delivered into the nucleus and transcribed into the capped and polyadenylated genome-length 35S RNA and the 19S subgenomic RNA for transactivator protein/viroplasmine (TAV). Translation of polycistronic 35S mRNA occurs via ribosomal shunting and re-initiation powered by TAV and its cellular partner proteins to yield the proteins for replication, packaging, aphid transmission and other accessory functions [18] (Figure 1). 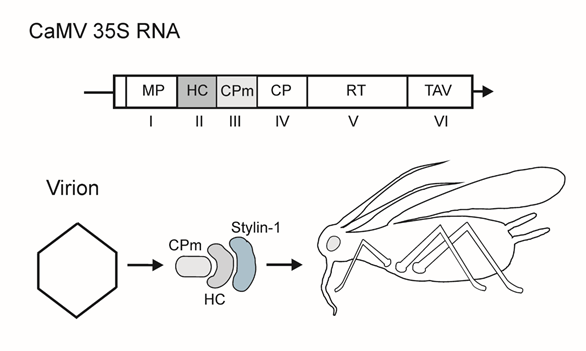 CaMV is semi-persistently transmitted by several aphid species of which Brevicoryne brassicae and Myzus persicae are the major field vectors [19]. The virus is acquired by aphids from epidermal and mesophyll cells during brief punctures; the acquisition significantly increases when the vector’s stylet reaches the phloem, and the subsequent inoculation occurs via intracellular salivation upon stylet punctures of the epidermal and mesophyll tissues [19]. CaMV particles are retained at the extreme tip of the maxillary stylet, where they likely interact, via the HC, with an aphid protein Stylin-1, which is thus a likely candidate to be a transmission receptor [20][21]. The key viral proteins involved in transmission, are the minor CP (gene III product, p3, referred to here as CPm in keeping with protein designations in other sections of this review) and the nonvirion helper component (HC, or p2, gene II product) (Figure 1). CaMV acquisition depends on the ‘transmission body’ in the infected plant cells, a dynamic ultrastructure accumulating the HC [22]. The CaMV CPm is inserted into the virion between the CP capsomers, with the CPm C-terminus embedded in the inner shell and the N-terminus exposed to the solution. In virions, the CPm forms homodimers via coiled-coil interactions of the N-terminal domains. The N-terminal domain of the virion-associated CPm drives interactions with the CaMV HC [23]. Oligomerization status may serve as a switch between the distinct functions of the CaMV CPm in vector transmission, cell-to-cell movement, and long distance transport, and may also determine its contacts with partner proteins.

Luteoviruses cause phloem-limited infections in cereals, which result in significant crop losses worldwide [24]. They have small nonenveloped capsids (about 25 nm in diameter) that encompass monopartite positive sense RNA genome of 5.5–6 kb [25]. Genomic RNA lacks a 5′-cap structure (some, but not all, luteoviruses bear a 5′-genome linked protein) and has no 3′-poly(A). The genome contains five to six ORFs (Figure 2) [25]. Prior to translation, luteovirus RNA adopts a circular conformation owing to the complementary sequences in the 5′- and 3′-noncoding regions, and the translation initiation is mediated by the 3′-cap-independent translational enhancer, a signal that attracts the 40S ribosomal subunit and initiation factors [26][27][28]. The genome expression pattern includes a number of non-orthodox translation mechanisms, i.e., −1 frameshifting for the RNA-dependent RNA polymerase (Pol), leaky scanning for the CP and vascular transport protein (TP), and suppression of the leaky stop codon for the CP fused to the C-terminal readthrough domain (CP-RTD) [25] (Figure 2). The elaborate readthrough signal in BYDV includes a cytosine-rich sequence 3′ to the UGA stop codon and a complementary sequence element located approximately 700 nt downstream [25]. The fusion protein is included in luteovirus capsids as a minor component; conceivably, the readthrough mechanism serves to downregulate the CP-RTD synthesis (Figure 2) [29][30]. Luteoviruses are transmitted by aphids in a persistent, circulative mode, with acquisition and inoculation access times of many hours and virus retention throughout life of the vector. The virus-vector interactions are highly specific, with each luteovirus transmitted by one or a few aphid species [31]. The barley yellow dwarf viruses are traditionally named after their aphid vectors, e.g., BYDV RPV (currently renamed as cereal yellow dwarf virus, CYDV RPV, transmitted by Rhopalosiphum padi), BYDV MAV (Macrosiphum (Sitobion) avenae), BYDV RMV (Rhopasosiphum maidis) [31].

Gray and Gildow [31] recognized four distinct stages in luteovirus transmission: (a) Acquisition from the phloem of infected plant into the aphid’s alimentary canal; (b) passage through the gut; (c) retention in the hemocoel; and (d) transfer into the salivary gland and transmission into the phloem cells of a host. In this circulative route, luteoviruses have to cross the membranes of the hindgut epithelium, the basal lamina and the salivary gland plasmalemma [31], which is apparently achieved by receptor-mediated endocytosis [31][32]. According to the in vitro data, the alanyl aminopeptidase N, a membrane-associated protein of pea aphid, Acyrthosiphon pisum, directly binds to the major CP of pea enation mosaic enamovirus and may be a receptor for the virus [33]. Several aphid proteins (e.g., actin, glyceraldehyde 3-phosphate dehydrogenase, and Rack-1) were reported to bind to luteovirus particles, but the significance of these interactions in virus transmission is as yet unclear [34][35]. An abundant protein called symbionin, a GroEL homolog produced in aphids by endosymbiotic Buchnera spp., binds luteovirus particles and influences their stability and transmission [36], although its direct involvement in virus transmission is questionable [31].

On the virus side, the CP-RTD appears to be the key transmission receptor. Luteovirus CP-RTD is a multifunctional protein containing the major CP domain, a proline-rich spacer between the CP and RTD sequences, the conserved N-terminal and variable C-terminal regions of the RTD [37]. The RTD C-terminal region is dispensable for transmission but is involved in luteovirus long-distance transport, accumulation, tissue tropism, and symptoms expression [38][39], whereas the N-terminus of RTD directs incorporation of the fusion protein in virions, interactions with the symbionin, and aphid transmission [40]. Noteworthy, the closely spaced point mutations in the beet western yellows virus RTD N-terminal region had effects on distinct stages of the virus circulative pathway, the gut transfer and the hemocoel–salivary gland transfer [40]. The deleterious point mutations in the RTD were rescued in the progeny by the second site (compensatory) mutations rather than true reversions, suggesting a structural redundancy of the RTD [40]. 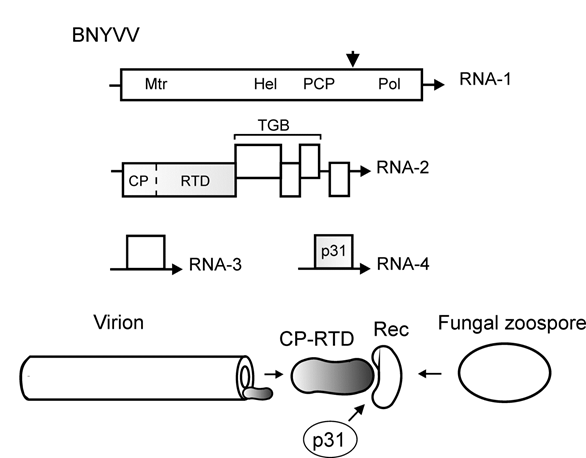 While the translation of monocistronic RNA-1, RNA-3, and RNA-4 is apparently straightforward, the expression of RNA-2 occurs via the readthrough mechanism and production of subgenomic RNAs [42][43]. The UAG stop codon in the CP gene is suppressed by ribosomes with ~10% efficiency to give rise to the CP-RTD fusion (Figure 3). It is possible that the BNYVV readthrough signal includes a downstream secondary structure, as is the case with luteoviruses [44].

BNYVV and several other viruses associated with rhyzomania (beet soil-borne virus, beet soil-borne mosaic virus, and beet virus Q) are transmitted by zoospores of soil fungus Polymyxa betae, an obligate parasite associated with cortical and epidermal root cells [45][46]. This fungus has a world-wide distribution. Once the virus is acquired by Polymyxa zoospores, it is retained through different stages of the fungus development, including sporosores (the resting spores), which explains the benyvirus survival in the infested soil for years [47][48]. The BNYVV nonstructural proteins have been detected in P. betae, but the question as to whether the virus replicates in the vector remains unclear [48].

BNYVV particles are transmitted by the viruliferous zoospores upon fusion of the vector and the host cytoplasm [47]. This is not a merely passive process, since the transmission is mediated by the benyvirus proteins. The CP-RTD, being exposed in one or a few copies at one end of the BNYVV particles [49], specifically influences the virus transmission [50]. Deletions within the RTD and point mutations of the KTER domain (amino acids 553 to 556 of the RTD) block the fungal transmission [51]. Mutations in the RNA-4 gene also have a detrimental effect on the vector transmission, suggesting that the nonstructural p31 protein assists the BNYVV acquisition and/or inoculation by P. betae zoospores [52][53]. It remains to be determined if the p31 is a bona fide helper component of BNYVV, or its action in the transmission is indirect.