Circular RNAs (circRNAs) are a class of non-coding RNAs that form a covalently closed loop.

Breast cancer (BC) is the most frequently diagnosed cancer and the leading cause of cancer death among females in over 100 countries [1]. According to the Global Cancer Statistics 2018, about 2.1 million females are newly diagnosed with the disease annually (24.2% of total cases), and more than 60,000 deaths are caused by BC (15.0%) [1]. In addition, incidence rates for BC have been rising in the last decade and have far exceeded those of other cancers in both developed and developing countries [2]. Breast cancer can be broadly classified into different subtypes based on the presence (+) or absence (-) of estrogen receptor (ER), progesterone receptor (PR), and human epidermal growth factor receptor 2 (HER2) [3]. Luminal subtypes are hormone receptor positive, whereas the HER2+ subtype is defined by overexpression of HER2 [3]. In triple negative breast cancer (TNBC), all three receptors are absent (ER−/PR−/HER2−) [4]. Compared to luminal and HER2 subtypes, TNBC is more invasive, has higher metastatic potential, and is associated with worse prognosis [4]. While some targeted therapies are available for luminal (endocrine therapy) [5] and HER2 (trastuzamab) subtypes [6], treatment options are limited for TNBC [7]. Currently, poly(ADP-ribose) polymerase inhibitors (PARPi) and immunotherapy (atezolizumab, pembrolizumab) are available for TNBC, but their application is restricted to a small subset of TNBC patients [7][8][9]. Overall, morbidity and mortality of BC remain high, in particular due to drug resistance and disease recurrence, indicating the need for new therapeutic targets and biomarkers [10].

Non-coding RNAs (ncRNAs) are a class of RNA molecules that have been well-demonstrated to play key roles in BC progression by impacting cell growth, metabolism, epithelial–to-mesenchymal transition (EMT), metastasis, or drug resistance [11]. A recent addition to the world of non-coding regulatory molecules is the class of circular RNAs (circRNAs). CircRNAs were originally discovered in 1976 as viroid RNA and were believed to be by-products of aberrant RNA splicing with little functional potential [12]. Recently, circRNAs have resurfaced and garnered attention due to the availability of high-throughput sequencing, with more than 183,000 circRNAs identified in humans thus far [13][14][15][16]. About 10% of all expressed genes (both coding and non-coding) are able to produce circRNAs [17]. They lack terminal 5′ caps and 3′ poly-A tails and are a stable and conserved class of RNA molecules [16][18]. CircRNAs are classified into three groups: exonic, intronic, and exon–intronic [19]. The expression of circRNAs is highly cell type- and tissue-specific [20][21], and some circRNAs are more abundant than their linear counterparts [22]. Additionally, no clear correlation has been detected between the abundance of circRNAs and their corresponding linear RNAs [20][22][23]. These observations suggest that circRNAs are likely functional and not mere by-products of RNA processing.

CircRNA biogenesis can be broadly classified into two types: lariat driven or aided by either the spliceosomal machinery or RNA binding proteins (RBPs) (Figure 1).

Figure 1. Proposed models of circular RNA (circRNA) biogenesis. Four proposed routes lead to the formation of circRNAs. (A) The pairing of intronic inverted repeat elements flanking either side of the exons leads to formation of circRNA [13]. (B) The alternative splicing mechanism “exon skipping” leads to an mRNA consisting of exons 1 and 4, as well as a lariat structure containing the skipped exons 2 and 3 [27]. (C) Under limited spliceosome activity, a shift from canonical splicing to back-splicing occurs that produces single-exon circRNAs, as cross-exon interactions are not replaced with cross-intron interactions [28]. (D) RNA binding proteins (RBPs) bind to recognition sites in introns near the circRNA-forming splice sites and promote circularization by bringing the circle-forming exons into close proximity [29][30].

Lariat driven circRNA biogenesis can occur via short, complementary repeat elements in flanking introns, which have been reported to be critical for circularization of intervening exons for some circRNAs [13] (Figure 1A). Alternatively, lariat-driven circRNA biogenesis can involve “exon skipping,” commonly associated with the splicing of pre-mRNA [27] (Figure 1B). In an exon-skipping event, a single pre-mRNA transcript can yield both a linear spliced mRNA and a circRNA comprising the skipped exons [27]. This process involves the generation of a lariat intermediate containing the excised exons, after which the introns in the lariat are removed [25], leading to a circRNA as well as a linear transcript devoid of the skipped exon(s) [31]. In canonical splicing, a 5′ splice site is recognized by U1 small nuclear ribonucleoprotein (snRNP), U2 snRNP binds the upstream polypyrimidine tract and branch point sequence, and cross-exon interactions are mediated by factors such as serine and arginine-rich (SR) proteins [28]. The cross-exon interactions are subsequently replaced with cross-intron interactions to enable complete assembly of the spliceosome and generation of linear RNA [28]. However, limited spliceosomal activity encourages a shift from canonical splicing to back-splicing that produces single-exon circRNAs, as cross-exon interactions are not replaced with cross-intron interactions (Figure 1C) [28]. Lastly, some studies revealed the involvement of certain RNA binding proteins (RBPs) in the process of RNA circularization [29][30] (Figure 1D). Splicing factors such as Quaking (QKI) and Muscleblind (Mbl) are known to facilitate and enhance circRNA production [29][30].

2.2. Discovery and Detection of CircRNAs

The first step towards the discovery of circRNAs involves the generation of non-polyadenylated transcriptomes. CircRNAs are enriched by depleting ribosomal RNA (rRNA) from total RNA, followed by an optional treatment with RNase R, a 3′-to-5′ exonuclease that preferentially digests linear RNAs, thereby allowing the enrichment of circular RNAs [32]. Libraries are prepared using a stranded total RNA library kit, coupled to paired-end high-throughput RNA sequencing (RNA-seq) [32]. Specific computational pipelines such as acfs [33], CIRIquant [34], CIRI2 [35], and CircExplorer2 [36] are designed to identify reads spanning the back-spliced junctions in reverse orientation (details outlined in Figure 2). To validate and quantify circRNAs in a targeted manner, qRT-PCR using primers designed to the back-spliced junctions can be applied [14].

Figure 2. Schematic for discovery of circRNAs through RNA sequencing. Total RNA is isolated and treated with RNase R, in combination with or without depletion of ribosomal RNA (rRNA) and followed by RNA sequencing. Sequenced reads are quality assessed, trimmed and mapped to the human genome. High quality mapped reads are further processed through circRNA prediction tools such as acfs, [33], CIRIquant [34], CIRI2 [35], and CircExplorer2 [36]. Figure created with BioRender.com.

2.3. Mechanism of Action of CircRNAs

Evidence showing tissue-specific expression, high abundance, and stability has solidified the case for a functional potential of circRNAs in the cell [16]. Proposed functions of circRNAs are dependent on their sub-cellular localization in the cell [37] (Figure 3). 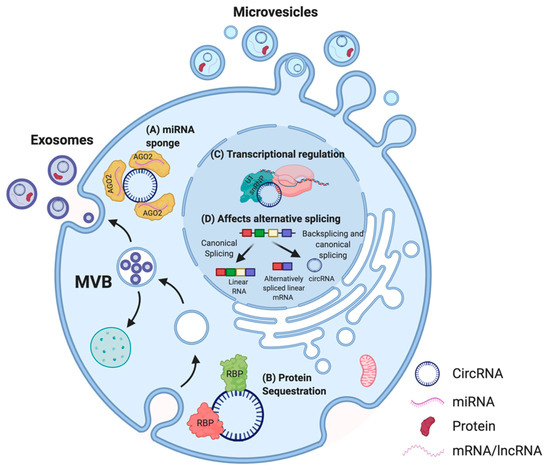 Figure 3. Proposed functions of circRNA in cells. In the cytoplasm, multiple circRNAs such as CDR1as have been shown to act as miRNA sponges (A) [38] whereas others possess binding sites for RBPs. For instance, circFOXO3 can act as a protein (CDK2 and p21) sequestering molecule (B) [39]. In the nucleus, circRNAs are able to influence the transcription of their parental genes by interacting with the U1 small nuclear ribonucleoprotein particle (U1 snRNP) and RNA polymerase II (C) [40] and can affect alternative splicing of transcripts, thus altering gene expression (D) [41]. CircRNAs can also be secreted out via extracellular vesicles (EVs) such as microvesicles or exosomes, and enable cell–cell communication [42][43][44]. Adapted from “Extracellular Vesicle Separation by Density Gradient Ultracentrifugation,” by BioRender.com (2020). Retrieved from https://app.biorender.com/biorender-templates.

Thus far, the most commonly described and well-characterized function of circRNAs is their ability to act as micro RNA (miRNA) sponges. Multiple studies reported that circRNAs comprise binding sites for miRNAs, thereby acting as a molecular decoy and inhibiting the functions of those miRNAs on their mRNA targets [15][45][46][47]. This association between circRNAs and miRNAs has also been linked to several human diseases, including osteoarthritis [48], diabetes [49], neurodegenerative pathologies [38], and several cancers [50][51][52][53][54][55]. Other circRNAs were described to contain binding sites for RBPs, and may function as scaffolds to facilitate protein interactions, to regulate protein function, or to sequester the bound protein [56][57]. For instance, circFOXO3, a circRNA downregulated in cancer cells, forms an RNA–protein complex with cyclin-dependent kinase 2 (CDK2) and p21, which disrupts the interaction of CDK2 with cyclin A and cyclin E, and subsequently blocks cell cycle progression [39]. Thus, some circRNAs are able to sequester proteins in the cytoplasm and prevent their entry into the nucleus. In addition, circRNAs have been demonstrated to regulate the expression of their parental genes in a cis-acting manner [58]. CircPAIP2 influences the transcription of its parental gene by interacting with the U1 snRNP and RNA polymerase II (RNA Pol II) (Figure 3) [40]. The binding of circRNAs to RNA Pol II can also affect alternative splicing [41]. A recent study also highlighted the biological significance of circSCAR, which localizes to mitochondria and may be a valuable therapeutic target for immunometabolic disorders [59]. Moreover, recent studies indicated that EV encapsulated synthetic or endogenous circRNAs can be transferred into acceptor cells, and these circRNAs retain their bioactivity after the transfer [42][43][44]. As numerous studies suggest that EVs play a crucial role in cell-to-cell communication [60], uncovering the roles of EV-associated circRNAs may be a useful addition to the development of new diagnostic and treatment approaches [61].