Problematic Use of the Internet and Smartphones in University Students: 2006–2017

The frequencies of Internet uses are shown in Table1. The most frequent activities on the Internet were checking emails and sending messages, participating in social networks, and listening to music. The least frequent uses were gambling and visiting adult pages. Significant gender differences were found between all uses except for online purchases, viewing of TV series, movies or videos, and administrative tasks. 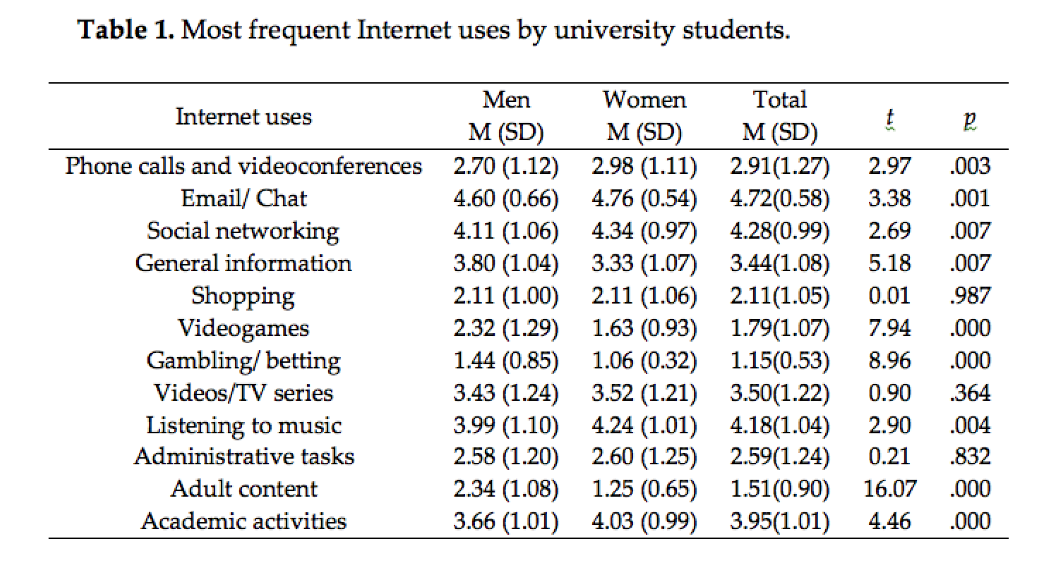 Regarding the self-assessment of whether they considered themselves addicted to the Internet, 375 students (47.4%) either agreed or strongly agreed with this statement. People who “strongly agreed” with the statement “I am addicted to the internet” obtained significantly higher results than the rest of the participants on both the CERI and the CERM. The correlations with the CERI and CERM were 0.38 (p < 0.001) and 0.34 (p < 0.001), respectively.

The comparison between the present study and former studies with CERM and CERI shows that  the scores on the CERI and CERM grew from 2005 to 2013 and remained stable as of the 2013-14 academic year. The number of students who showed problematic Internet use went from 1.5% in 2005 to 6.4% in 2017 and from 0.6% to 3.0%, in the case of problematic mobile phone use. The correlation between CERI and CERM was “moderate” up to 2014 and increased to “high” as of 2015. The increase of the perception of problematic Internet and smartphone use was stronger for females than for males, but as of 2017, both sexes had lower scores and tended to present the same degree of negative effects.

Although men and women use the Internet differently, their problematic use of the Internet  and mobile phones are quite similar. In university students, the use of social networks is the main factor responsible for the perception of problematic use, a casuistry that has increased in the decade 2006–2016. Despite the limitations of the CERI and CERM, estimating the prevalence at different points in time offers valuable information about the evolution of the perception of problematic Internet and mobile phone use.   The degree of agreement with the statement “I am addicted to the Internet” might be used as a screening question for the problematic use.