Mitochondrial DNA (mtDNA) diseases are a group of maternally inherited genetic disorders caused by a lack of energy production.

Mitochondria are double membrane organelles present in most eukaryotic cells [1], whose main function is to obtain energy as ATP (Adenosine 5’-triphosphate) through oxidative phosphorylation (OXPHOS) [2]. The OXPHOS process involves five multi-enzymatic complexes that couple the electron transport chain with the synthesis of ATP [1]. Besides providing up to 95% of the energy requirements of cells [3][4][5], OXPHOS also participates in other processes, such as thermogenesis, calcium homeostasis, programmed cell death (apoptosis), and the secondary production of reactive oxygen species (ROS) [1][6]. Mitochondria are semi-autonomous and contain their own genome: the mitochondrial DNA or mtDNA [7]. The mtDNA molecule is double-stranded, circular, and contains approximately 16.6 kb [2][8]. Each mitochondria carries 2 to 10 copies of mtDNA [1]; this implies that a human oocyte can contain from 100 to more than 100,000 copies of mtDNA [9]. Despite their multi-copy nature, the mtDNA only represents 0.1% of a cell genome [10]. The mtDNA is inherited exclusively from the mother since at fertilization, the mitochondria of the sperm are degraded and the ovum provides all the zygote mitochondria.

Mitochondrial genetics is very complex and requires the coordinated expression of genes located in both mtDNA and nDNA [5][7][11]. In fact, more than 1,000 mitochondrial proteins are encoded by nDNA [5]. Human mtDNA contains 37 genes: 22 genes encode transfer RNA, 2 encode ribosomal RNA, and the other 13 genes encode polypeptides involved in OXPHOS [2][10][12]. The rest of the necessary proteins for the correct function of mitochondrion, including 79 structural subunits of the OXPHOS [13], are encoded by genes within nuclear DNA (nDNA), and are imported from the cytoplasm [6][14]. Characteristically, mtDNA presents a high mutation rate [11], and these mutations constitute the most frequent inherited metabolic diseases [6]. Mitochondrial diseases are a group of genetic pathologies characterized by presenting dysfunctional mitochondria with defective OXPHOS process [6][15] and ATP production, which mainly affect tissues with higher energy consumption [4][5]. This review focuses only on those mitochondrial diseases caused by pathogenic mutations within the mtDNA. One in 200 live births carries a mutated mtDNA and, despite  not all develop the disease, women will transmit the mutation to their offspring [16]. The prevalence of mitochondrial diseases due to mtDNA mutations is approximately 1/5,000 [17]. Mutated and non-mutated mtDNA molecules coexist in the cells of an individual, a phenomenon called heteroplasmy [5][7]. The higher the percentage of mutated mtDNA molecules, the higher is the level of heteroplasmy (from 0% to 100%) [7]. It is assumed that a mitochondrial disease clinically appears when heteroplasmy achieves levels over 60%. From this threshold, the disease severity increases as heteroplasmy does [6]. Threshold theory does not define the value of the heteroplasmy, but claims the presence of a biochemical threshold line, which depends upon individual cells [5]. Women carrying mutated mtDNA have different options to have free-of-disease offspring: (a) adoption; (b) gestation with a non-related donor ovum; (c) pre-implantation genetic diagnostic (blastocysts biopsy) to select healthy embryos; and (d) pre-natal genetic diagnostic (amniotic biopsy) with the option of pregnancy interruption.

Only options (c) and (d) would permit mutation carriers to have genetically related healthy offspring. In women carrying deleterious mtDNA mutations wanting to have offspring, ovum and embryos with low heteroplasmy levels must be selected. However, the risk of offspring developing mitochondrial pathology does not disappear, due to bottleneck and random genetic drift. The bottleneck theory suggests that, during the female embryo development, the precursor cells of oocytes reduce their amount of mtDNA molecules. Later, daughter cells amplify selectively the scarce molecules of mtDNA until obtaining the high amounts of mtDNA present in mature oocytes, causing heteroplasmy disparity among the oocytes of the same woman [5][16], enabling the transmission of a mitochondrial disease to offspring. In “random genetic drift”, heteroplasmy levels changes over time, especially during embryo development due to relaxation in the mitochondrial cycle (asymmetric distribution of mitochondria to daughter cells during mitosis, relaxed mtDNA replication) [4][7][18]. As a consequence, when an embryo is generated from an heteroplasmic oocyte, the final level of mutated DNA can differ greatly among the tissues of the same individual, supporting the phenotypical variety observed in mitochondrial diseases (including the absence of symptoms) [4][7].

Different mitochondrial replacement techniques (MRTs) have been proposed with the aim of completely preventing the vertical transmission of mtDNA pathologies [15], and substituting the entire mitochondrial repertoire (with a mutated genome) of an oocyte/zygote for another functional one. Generally, MRTs consist in transferring the nDNA from an oocyte or zygote containing mutated mtDNA to an oocyte or zygote with functional mitochondria, previously enucleated. The resulting zygote has nDNA from the biological mother and cytoplasmic material, including healthy mitochondrion, from the donor oocyte [19][20][21]. At present, it is estimated that MRTs could prevent 150 cases of mitochondrial diseases in the UK and, approximately, 780 in the US [22]. Besides the evident benefits of these techniques to the families affected by the disease, they could also greatly affect health expenditure. However, there is not much information about their safety. The only precedent available in the literature about mitochondrial donations is focused on the ooplasmic transfer performed in the USA between 1997 and 2001 [23]. The goal of this strategy was that the cytoplasmic factors transferred, including mitochondrion, could improve the fertility of the recipient oocyte [24]. After more than 30 births, the FDA banned this technique in 2001 due to the occurrence of congenital defects and potential ethical issues derived from the germline modification [24][25]. In this sense, MRTs are not exempt from ethical objections (use of embryos for research purposes, germline modifications, etc.). In 2015, the UK was a pioneer in approving the clinical use of MRTs for the first time. The application of these strategies has extended to other countries, although without the appropriate legislation [26].

In the reviewed literature, five techniques for mitochondrial replacement therapies with clinical trial support were found:

The main difference among the techniques is the biological form of the nuclear genome when it is transferred within the karyoplast, considering the changes occurring in oocyte nDNA during the gametogenesis (Table 1, Figure 1). 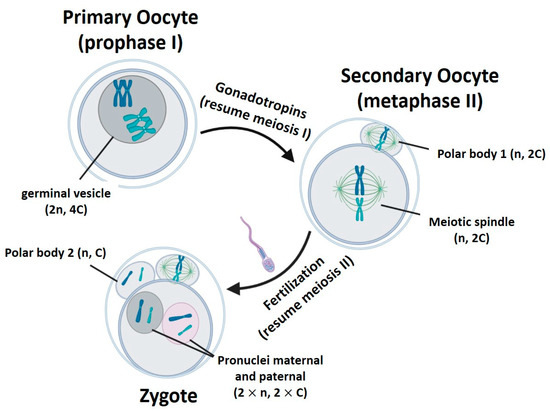 Figure 1. Gametogenesis process. n represents the number of chromosome sets. C is the amount of chromatids in a chromosome pair. Created with BioRender.com.

Two main variables have been employed by researchers to evaluate the safety and efficacy of MRTs:

(1) Potential embryo development of the reconstituted oocyte/zygote: this variable informs about the survival rate of the reconstituted oocyte/zygote after its micromanipulation, and its potential to progress to different development stages (morula, blastocyst, or even birth in animals) [19][27][28]. In humans, generally the development reached morula or blastocyst stages and fetuses survived only to mid-gestation [1][35]. However, another work [34] reported the birth of a healthy boy from a mother carrying mutated mtDNA. Given the ethical and legal restrictions on human embryo research, many authors decided to deeply study the potential development of embryonic stem cells (ESCs) from blastocysts [29][30][32][33][36][37][39][40], although these cells may not be representative of normal embryo cells [1].

(2) Mitochondrial DNA carry-over: mitochondrial carry-over is defined as the mtDNA that is inadvertently transferred with the nDNA, since, to date, 100% mitochondrial exclusion has not been possible. This carry-over is expressed as heteroplasmy percentage: the ratio of maternal mtDNA with respect to the donor ovum mtDNA.

Mitochondrial DNA carry-over is undesirable as it supposes that mutant mtDNA has been transferred along with nDNA, allowing the risk that offspring could develop the mitochondrial disease. In this respect, rates of carry-over higher than 5% have proved to increase the risk of developing mitochondrial diseases in posterior generations (in females), and carry-over rates over 20% increased the risk of presenting a mitochondrial disease throughout life [36]. For this reason, the goal in every research work has been obtaining the lowest possible rates of carry-over, even under levels of 2–3% [19][20], in order to avoid potential deleterious effects. Embryonic stem cell derivation plays an important role in carry-over studies, since cell sub-cultures permit evaluating the evolution of the carried-over mtDNA over time, and somehow emulating the normal embryo development [32][33][36].