Lysosomes, the membrane-bound digestive cell organelles, are well-known for their catabolic function.

Lysosomes, the membrane-bound digestive cell organelles, are well-known for their catabolic function. They dynamically interact with autophagy and endocytosis pathways which transport intracellular components or extracellular cargos to lysosomes, respectively [1][2][3][4] (Figure 1). Both intracellular and extracellular cargos can be broken down into their constituent building blocks (e.g., amino acids and free fatty acids) by lysosomes through hydrolysis [5][6]. To date, around 60 hydrolytic enzymes, including proteases, lipases and nucleases have been found in lysosomes [7]. The activity of these hydrolytic enzymes is stimulated by the acidic lumen (pH 4.5–5.5) of lysosomes, which is established by the vacuolar H+-ATPase (V-ATPase), an ATP-driven proton pump [5][8][9] (Figure 2). Metabolites produced by hydrolysis are eventually recycled back to the cytoplasm or exported to the extracellular environment through exocytosis (Figure 1). 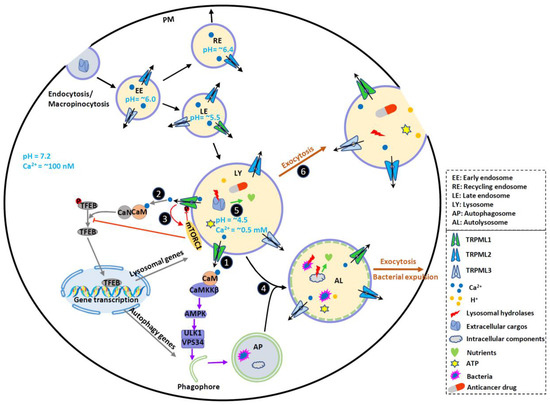 In addition to being the degradative endpoints, lysosomes are also the cellular signaling hubs that are involved in the regulation of cell growth, proliferation and differentiation [6][7][10][11]. For example, the lysosomal membrane hosts nutrient- and energy-sensing machineries in response to both internal stimuli and external changes of environment. In particular, both the master nutrient sensor mechanistic target of rapamycin complex 1 (mTORC1) [6][12][13][14][15][16] and the master energy sensor AMP-activated protein kinase (AMPK) [17][18][19][20] are associated with lysosomes and strictly control cell growth, proliferation and differentiation by sensing cellular metabolic status [17][21].

Lysosomal degradation and signaling require the establishment of the luminal ionic homeostasis [1] including Ca2+, Na+, K+, Cl− and heavy trace metals such as Fe2+ and Zn2+. The lysosome is one of the main storage organelles of the second messenger Ca2+. The luminal Ca2+ concentration of lysosome is ~0.5 mM [22][23], which is approximately 5000-fold higher than that in cytosol (~100 nM) [24] (Figure 1). The Ca2+ gradient across the lysosomal membrane is important, as it enables a small fraction of lysosomal Ca2+ efflux to generate a marked signal, resulting in the activation of downstream signaling cascades [2][25][26][27]. Lysosomes express various Ca2+-permeable channels on their membranes to regulate both local and global intracellular Ca2+ signals. These Ca2+-permeable channels include TRP Mucolipins (TRPMLs, TRPML1-3), Two Pore Channels (TPCs, TPC1-2), TRP Melastatin 2 (TRPM2), TRP Ankyrin 1 (TRPA1), P2X4 purinoceptor, and Voltage-Gated Ca2+ Channel (VGCC) [1][23][28][29][30][31][32] (Figure 2).

TRPMLs are the most intensively studied lysosomal Ca2+ channels, which belong to the large family of TRP ion channels [33][34][35] (Figure 3). Compared with other channels of TRP family that are expressed on plasma membrane (PM), TRPMLs act predominantly in the endolysosomal system, regulating vesicles trafficking and function along endolysosomal pathways. All three members of TRPMLs can be activated by PI (3,5) P2, an endolysosome-specific phosphoinositide [36]. In mammals, TRPML1 is expressed in all tissues [37][38], and it is predominately localized on the late endosome (LE) and lysosome [35][39] where the low luminal pH facilitates its activation [39]. By releasing lysosomal Ca2+, TRPML1 regulates several membrane-trafficking processes, including lysosome to trans-Golgi–network (TGN) retrograde trafficking, autophagosome-lysosome fusion, and lysosomal exocytosis [1][40][41][42]. Mutations in TRPML1 causes a human autosomal recessive disease named mucolipidosis type IV (MLIV), a lysosomal storage disease (LSD) [37][43]. Impaired TRPML1 has also been associated with several other LSDs [44]. Compared with TRPML1, TRPML2 and TRPML3 are less understood. Both of them are more easily activated by higher pH [45][46][47]. Although TRPML2 is found in most organs, it is abundant in immune cells and tissues [48][49][50]. Subcellularly, TRPML2 is primarily expressed on the recycling endosomes (RE) and the early endosomes (EE) [46][50][51] where it regulates the recycling of specific proteins from RE/EE to the cell surface [51]. Emerging evidence suggests that TRPML2 is an osmo/mechanosensitive ion channel on endolysosomal membranes [52]. Currently, TRPML2 has not been linked to any human disorders. However, it may play an important role in the secretion of chemokine and cytokine by macrophages [46][50]. TRPML3 is predominantly localized in the endocytic and autophagic pathways, in line with its cellular function of regulating endocytosis and autophagy [53][54][55]. The expression of TRPML3 has been detected in skin melanocytes, hair cells of the inner ear, neonatal intestinal enterocytes, as well as cells in the thymus, kidney and lung [56][57]. The gain-of-function mutation A419P in TRPML3 causes the varitint-waddler phenotype in mice, characterized by hearing loss and circling behavior [47][58][59].

Figure 3. TRPML ion channels. (A–C) TRPML pore-forming subunit contains six transmembrane segments (S1–S6) and a putative pore region (P), with presumably cytosolic N- and C- termini. Distinct from other TRP channels, TRPMLs are characterized by a large extracellular (or intraluminal) loop between S1 and S2. There are dileucine motifs in TRPML1 and TRPML2 at their C- and/or N- termini to determine their intracellular endolysosomal localization. The endolysosomal localization of TRPML3 is determined by its heteromultimerization with other TRPMLs. (D) Functional TRPMLs are tetramers. (E) TRPMLs currents measured using lysosome-patch-clamp method. Physiological asymmetric solutions are used. The bath solution (cytosolic) contains (in mM) 145 K+, 5 Na+, 0.0001 Ca2+, and pH 7.2. Pipette solution (luminal) contains (in mM) 145 Na+, 5 K+, 0.5 Ca2+, and pH 4.6. TRPMLs are activated by cytosolic PI (3,5) P2 (1 µM), a lysosome-specific phosphoinositide. TRPMLs are inwardly (cation flowing from the lumen to the cytosol) rectifying channels permeable to cations. Given the topology of the TRPML proteins at the lysosomal membrane and the electrical properties of the lysosome, TRPML opening leads to Ca2+ and Na+ release from the lysosome to the cytosol.

Given the crucial role of lysosomes in multiple biological functions and signals, dysregulation of lysosomal function may cause human diseases. Indeed, a growing number of studies have demonstrated that tumor angiogenesis and progression are associated with altered lysosomes [60][61][62][63]. Growing evidence also suggests that intracellular Ca2+ signals mediated by lysosomal Ca2+ channels may control the development of various cancers. Herein, we summarize the emerging role of lysosomes and TRPMLs in cancer development. We hope to guide the readers into a more in-depth discussion of the relationship between lysosomal Ca2+ signaling and cancer development, potentially directing the development of new therapeutics for cancer.