Agrobacterium tumefaciens genetically transforms plant cells by transferring the transfer-DNA (T-DNA) and virulence (Vir) proteins from bacteria via a VirB-encoded type IV secretion system into plants. The effectors manipulate plant proteins to assist in T-DNA transfer, integration, and expression in plant cells. The Arabidopsis reticulon-like (RTNLB) proteins are located in the endoplasmic reticulum and are involved in endomembrane trafficking in plant cells. We functionally characterized reticulon-like protein B4 (RTNLB4), which interacted with the A. tumefaciens VirB2 protein, a major component of A. tumefaciens T-pilus. Overexpression or knockdown of RTNLB4 affected the expression of A. tumefaciens elf18 peptide-induced plant defense-related genes and could affect Agrobacterium-mediated transformation rates. Pre-treatment with elf18 peptide decreased Agrobacterium-mediated transient expression efficiency more in wild-type seedlings than RTNLB4 O/E transgenic plants, which suggests that the induced defense responses in RTNLB4 O/E transgenic plants might be affected after bacterial elicitor treatments. We also showed that two VirB2 peptides induced the expression of defense-related genes and H2O2 production and inhibited seedling growth. These typical pathogen-associated molecular pattern-trigged immune responses were less induced in RTNLB4 overexpression transgenic plants. Our findings provide strong evidence that RTNLB4 has major roles in the A. tumefaciens elf18 and VirB2 peptide-derived plant defense responses. We believe this study advances our understanding of possible functions of the RTNLB4 protein in the A. tumefaciens infection process and plant immunity.

The VirA/VirG two-component system in A. tumefaciens can detect phenolic compounds, such as acetosyringone (AS), released from plants, and activates downstream vir gene expression to help with bacterial infection [3]. One of the Vir proteins, VirD2, binds to the border sequences of the tumor-inducing plasmid (Ti-plasmid), and the T-DNA fragment (called transfer DNA, T-DNA) is processed, generated, and transferred into plant cells. VirD2 covalently binds to the 5’ end of T-DNA and guides T-DNA transfer into plants through a type IV secretion system (T4SS) that contains a transmembrane transporter and a filamentous pilus (T-pilus) comprising VirB1-B11 and VirD4 proteins [4][5].

In addition to VirD2, the VirE2, VirE3, VirD5, and VirF proteins are transferred into plant cells via a T4SS and help with T-DNA transfer and integration into the plant genome [6]. VirE2 protein is a single-stranded DNA binding protein (SSB) that can bind to the single-strand T-DNA and prevent T-DNA degradation by host enzymes [7]. Recent studies demonstrated that VirE2 may enter the plant cells by clathrin-mediated endocytosis, and the pattern of VirE2 migration is consistent with the endoplasmic reticulum (ER) and F-actin network, which suggests that VirE2 may move through the plant cytoskeleton network into the nucleus [8][9][10]. VirD2 and VirE2 interact with several members of the importinα (IMPa) family that mediate nuclear import of NLS-containing proteins in plant cells [11][12]. The host cell nuclear import machinery may be used by A. tumefaciens to help with nuclear targeting of T-DNA [2][13].

Upon A. tumefaciens infection, VirE2-interacting protein 1 (VIP1) is phosphorylated by mitogen-activated protein kinase 3 (MPK3) and acts as a transcription factor that induces the expression of several stress-responsive genes, such as PATHOGENESIS-RELATED 1, and activates stress signaling transduction cascades to counteract bacterial infection [14][15][16]. In addition, phosphorylation of VIP1 by MPK3 can help with nuclear entry of VIP1 by the plant cell nuclear import system [14][15][16]. However, A. tumefaciens may use another effector protein, VirF, to decrease the VIP1-mediated host defense responses by forming a SCF–E3 ligase complex and degrading the VirE2–VIP1 protein complex by the ubiquitin/proteasome system of the host defense mechanism [17][18][19][20]. At the same time, VirF may facilitate the disassembly of the T-complex by the plant ubiquitin–proteasome complex and mediate T-DNA integration into the host chromosome [19][20][21]. Inside plant cells, VIP1-binding F-box protein is a member of the SCF complex and may functionally replace VirF to destabilize the VIP1–VirE2 complex by proteasomal degradation [19]. Thus, A. tumefaciens utilizes various bacteria effectors and exploits plant proteins to avoid plant defense responses and secure successful infection.

During plant pathogen infections, endomembrane trafficking systems help transport surface-localized pattern-recognized receptors (PRRs) to the plant cell surface for secretion of defense-related proteins, antimicrobial metabolites, and cell wall components to counteract pathogen invasion [22][23][24]. The functions of vesicle trafficking and integrity of the endomembrane system play important roles in the plant defense response. The reticulon (RTN) proteins are mainly associated with the ER and are involved in neurite growth, endomembrane trafficking, cell division, and apoptosis [25][26]. The plant subfamily of RTN-like proteins (RTNLBs) has 21 members in Arabidopsis [27]. Only a few members of RTNLBs have been studied, and five members (AtRTNLB1-4 and 13) are predominantly localized in ER and participate in tubular ER shaping [27][28][29]. So far, only limited reports demonstrated the RTNLB roles in plant defense responses.

In this entry, we showed that when the RTNLB4 was knocked down or overexpressed, the transformation rates of A. tumefaciens were affected. The induced expression of defense-related genes was lower in RTNLB4 overexpression (O/E) transgenic plants treated with a PAMP, the elf18 peptide, which suggests the involvement of RTNLB4 in plant defense responses. RTNLB4 interacted with A. tumefaciens VirB2, a major component of T-pili. Different regions of the processed VirB2 proteins were then used to design five peptides to examine their effects on plant defense gene expression and response. Pretreatment with two VirB2 peptides, S111-T58 and I63-I80, for 6 hr decreased transient T-DNA expression in wild-type but not efr-1 and bak1 mutant seedlings. The two peptides induced relatively higher expression of several defense-related genes, including FRK1, WRKY22, WRKY29, MPK3, and MPK6, in wild-type plants than in RTNLB4 O/E transgenic plants. Furthermore, elf18- and VirB2 peptides-mediated Arabidopsis seedling growth inhibition and H2O2 accumulation were reduced in RTNLB4 O/E transgenic plants. RTNLB4 may have important roles in A. tumefaciens elf18 and VirB2 peptide-induced plant defense responses. 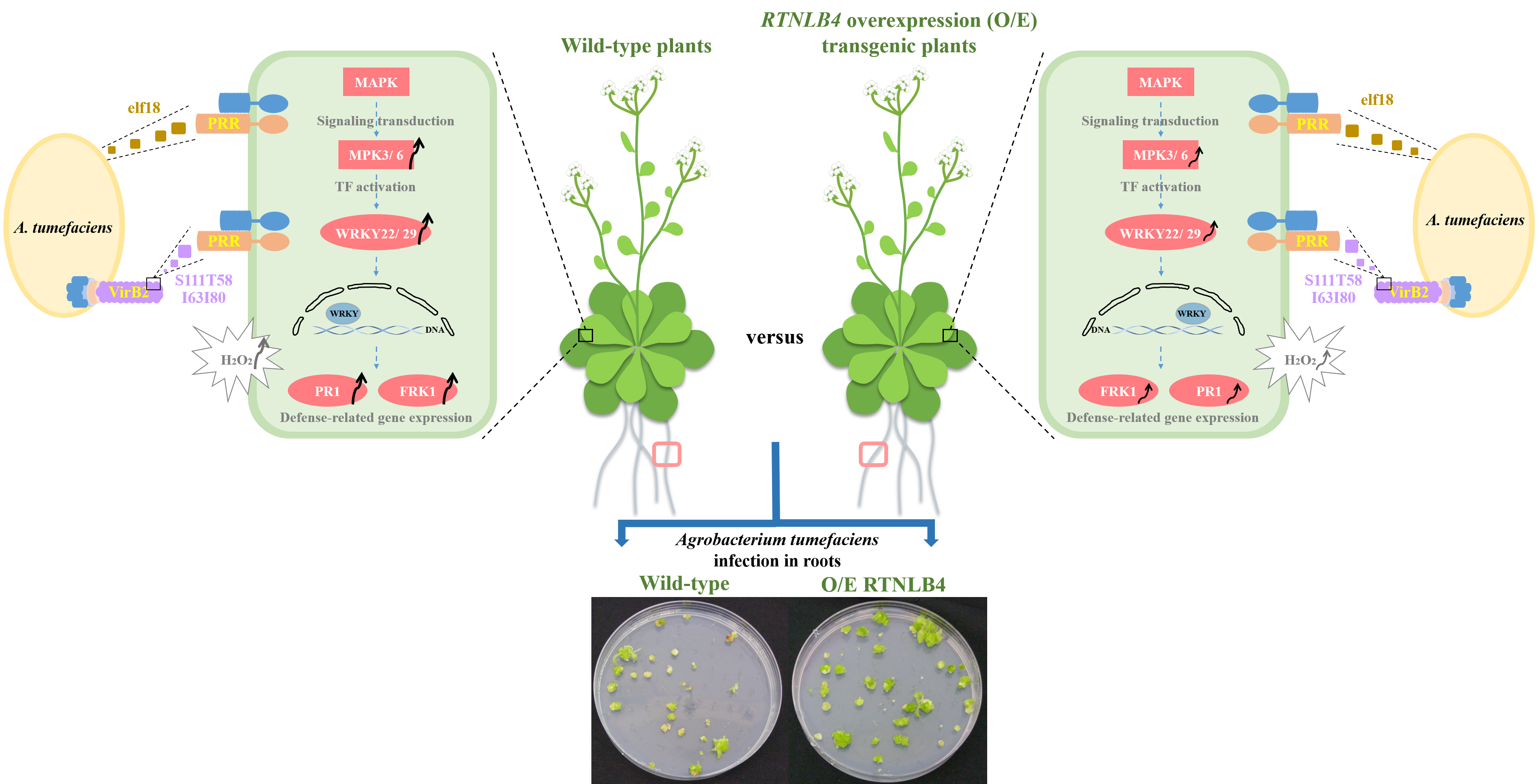