Peripartum cardiomyopathy (PPCM) is a condition in which heart failure and left ventricular systolic dysfunction occur in the last month of pregnancy or within months following delivery.

Peripartum cardiomyopathy (PPCM) is a rare form of cardiac muscle disease associated with pregnancy. PPCM is a potentially lethal condition which is defined as heart failure (HF) and left ventricular systolic dysfunction occurring late in pregnancy or within months following delivery and in the absence of other causes of HF [1]. Although left ventricular recovery is possible up to 12 months following diagnosis, adverse outcomes such as irreversible HF, arrhythmia and sudden cardiac death are frequent [2][3].

The reported incidence of PPCM varies greatly between population groups, from approximately 1:1000 pregnancies in South Africa [4] to 1:10,000 pregnancies in Denmark [5]. Higher incidence of PPCM in Nigeria, South Africa and African Americans reported historically suggests that individuals of African descent may be at greater risk of PPCM [4][6]. However, a multicentre registry spanning 43 countries indicated that PPCM is a global disease that is likely to be under-reported in many instances and can occur in women of any ethnic background [7]. Other documented PPCM risk factors include multiparity, increased maternal age, and family history of cardiovascular disease [1]. The disparity in PPCM prevalence across various populations suggests that apart from environmental factors, a strong genetic basis for the condition may exist.

Precisely how PPCM develops is unclear, although there are several proposed mechanisms (Figure 1). It has been observed that pregnancy induces dramatic haemodynamic changes, such as reduced afterload and an increase in cardiac output and blood volume [8]. These changes trigger homeostatic and structural remodelling of cardiovascular tissues which results in exacerbated cardiac stress. As such, the hormonal changes associated with parturition may trigger endothelial dysfunction and PPCM in susceptible women [9]. Over the last decade, much progress has been made towards understanding the genetics of familial forms of cardiomyopathy such as dilated cardiomyopathy (DCM). Given the role of family history and genetic factors in PPCM, these advances have afforded opportunities to better understand the genetics of PPCM. This review summarises current knowledge of the genetic contribution to PPCM and highlights potential avenues for future research.

2. The Role of Familial Cardiomyopathy Genes in PPCM

One of the first indications of the role of genetic susceptibility in PPCM pathogenesis was familial clustering of PPCM with other forms of cardiomyopathy. Three instances of familial PPCM were reported in 1963 by Pierce et al. [10]; many similar familial occurrences of PPCM and DCM have been subsequently documented [11][12][13][14][15][16][17]. Although PPCM is a distinct clinical entity, these observations of overlap with familial DCM indicate that, in at least a subset of patients, PPCM may form part of the clinical and genetic spectrum of DCM. DCM itself is a vastly heterogeneous disease, genetically overlapping with hypertrophic cardiomyopathy (HCM), arrhythmogenic cardiomyopathy (ACM), and channelopathies: mutations in many of these genes have also been described in PPCM patients (Table 1; Figure 2).

Table 1. Summary of genes associated with PPCM to date. 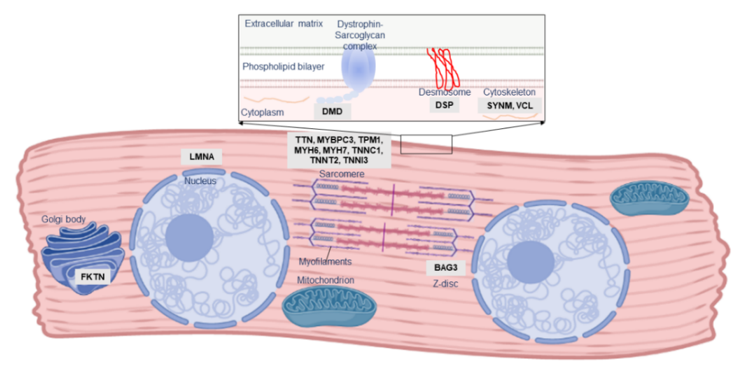 Figure 2. Localisation and function of PPCM-associated genes in the cardiomyocyte. The majority of PPCM genes, including Titin (TTN), comprise the cardiac sarcomere, but mutations affecting numerous other aspects of cardiomyocyte function have been implicated in PPCM pathogenesis.

In what appears to be the first documented genetic cause of PPCM, a 2001 case report described a female carrier of a Duchenne Muscular Dystrophy-causing DMD mutation who developed PPCM during the 36th week of pregnancy [18]. As an X-linked gene, most female carriers of DMD mutations are asymptomatic although some may develop mild disease or cardiomyopathy, and it was unclear if the PPCM, in this case, was related to her carrier status. However, similar case reports of PPCM amongst DMD and LAMP2 X-linked mutation carriers have been described [19][20][21]. LAMP2 mutations cause Danon disease, a form of cardiomyopathy and skeletal myopathy, through impairment of macroautophagy [22], while DMD mutations cause muscular dystrophy and/or DCM through the loss of the stabilising protein dystrophin, leaving myocytes vulnerable to oxidative stress and calcium overload [23]. In both cases, it is thought that skewed X-chromosome inactivation, in which only some cells express the DMD or LAMP2 mutation, underlies the comparatively milder cardiac phenotype observed in females [24]. It is possible, too, that this mosaic status in females may be exacerbated by stress conditions such as pregnancy, although no evidence of this has been reported as yet.

DMD and LAMP2 mutations are very rare causes of DCM; notably, most known DCM-causing mutations affect the sarcomere, causing cardiomyopathy through impaired force generation or reduced contractility in the heart. Early investigations reported several mutations in the sarcomeric genes MYBPC3, MYH6, MYH7, TNNC1 and TNNT2 in Dutch and American PPCM cohorts [13][17][25]. As such, similar studies across several other populations may provide critical information into the role of these mutations in PPCM.

As knowledge of DCM genetics has evolved over time, so too has knowledge of the genetic contribution to PPCM. Subsequent to these initial investigations, the giant sarcomeric protein-coding gene TTN emerged as a key gene in cardiomyopathy, accounting for up to 25% of familial DCM cases [26]. As the second-longest gene in humans, genetic variation in TTN is common [27], and it may be challenging to differentiate benign polymorphisms from true cardiomyopathy-causing mutations. However, frameshift insertions/deletions and nonsense mutations (truncating mutations) in TTN have been reported at an increased prevalence in DCM patients [26][27]. The mechanisms underlying TTN cardiomyopathy are thought to involve impairment of force generation or transmission in the myocardium or disrupted signalling [28]. BAG3 has also recently emerged as a major cardiomyopathy gene [29]. BAG3 encodes a multifunction co-chaperone protein involved in myocardial protein homeostasis, stabilisation of the myocardial Z disk, and modulation of cardiac contraction [30]. Mutations in BAG3 can cause cardiomyopathy through impairments in any of the protein’s diverse functions [31].

The emergence of high throughput next-generation sequencing (NGS) platforms enabled the rapid sequencing of patient genes and has highlighted the genetic overlap between different forms of heritable cardiomyopathy. Following these genetic advances, NGS studies of PPCM cohorts have revealed truncating mutations in TTN as the predominant genetic contributor to PPCM in American, Australian and European patients [32][33][34]. Although such TTN mutations are present in healthy individuals, they were found to be significantly more prevalent amongst PPCM patients [33]. In addition, the TTN mutations were mostly localised to the protein domains already associated with DCM (A-band), thereby implicating their possible role in PPCM [33]. In these NGS studies, mutations were reported in other cardiac disease genes, including disruptions of BAG3 [32][33][34]. Cumulatively, these cohort studies of PPCM have identified pathogenic mutations in 23% of cases (Figure 3). Studies of isolated PPCM cases have further implicated TTN in severe PPCM [35], as well as other disease genes such as KCNH2, RET and TXNRD2 [16][36][37], although the contribution of these genes to PPCM is unclear: the mutations in these cases may merely reflect the co-occurrence of genetic disorders with PPCM. Mutations in FKTN, RBM20, LMNA and DSP were also linked to PPCM through large cardiomyopathy family studies [38][39][40][41].

The diverse genetic aetiology of PPCM (Table 1) mirrors the genetic profile of DCM and strengthens the notion that PPCM may share genetic determinants with familial cardiomyopathy. In PPCM, as in DCM, a high proportion of TTN truncating variants is observed, and at present appears to be the greatest single genetic contributor to disease pathogenesis [32][33]. The mutation detection rate of genetic testing in DCM ranges from 15% to 40%, with familial history and larger gene panels contributing to higher mutation yields [42]. Although within this range, the relatively low yield (~20%) in PPCM may be attributed to the substantially fewer patients who have been screened so far, combined with fewer genes being sequenced in earlier studies.

When considering the worldwide distribution of PPCM-associated mutations (Figure 4), it is noteworthy that the majority have been identified in American and European populations, but even then, many of the genes are limited to single observations and case reports. Analysis of participants of African descent by Ware et al. [33] revealed mutation yields that were akin to those in individuals of European ancestry, indicating a similar genetic basis of PPCM in different population groups. This also suggests that mutation screening of African PPCM cohorts may be warranted. In DCM, the clinical utility of genetic testing can extend to family management and individual treatment and prognosis, through the characterisation of genotype-phenotype correlations. For example, LMNA mutations are associated with severe DCM with high penetrance and increased risk of sudden death, while TTN mutations have been associated with milder disease with reduced penetrance [43]. Mutations in these genes have been reported in PPCM, but their implications on phenotype and outcome are still to be determined. Further research is also needed to determine whether the co-occurrence of cardiomyopathy mutations in PPCM patients reflects causality or if, rather, it is the physiological strain of pregnancy that reveals cardiomyopathy in previously asymptomatic mutation carriers. 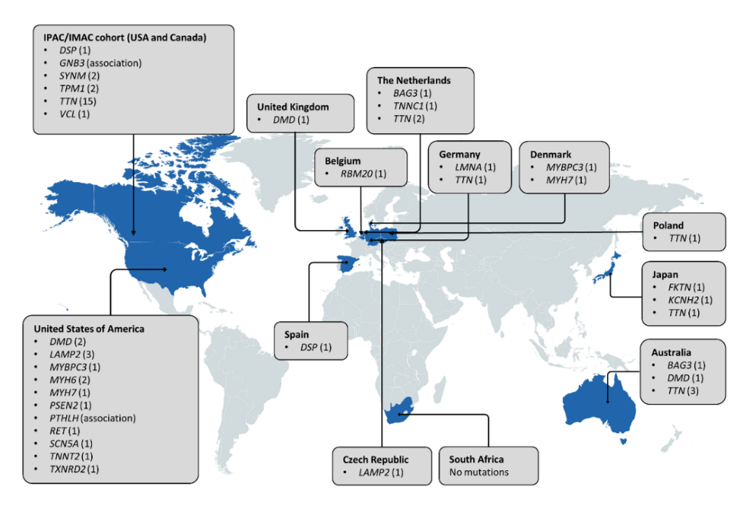 Figure 4. Distribution of genes associated with PPCM to date. Countries in which genetic investigations of PPCM patient(s) have been conducted are indicated in blue. The number of pathogenic mutations identified in each gene is indicated in parentheses. Three pathogenic MYH7 mutations and seven SCN5A mutations are not included as the countries of origin could not be determined.