Subjects: Others
View times: 79
Submitted by:

Organic and inorganic nanoparticles (NPs) have shown promising outcomes in transdermal drug delivery. NPs can not only enhance the skin penetration of small/biomacromolecule therapeutic agents but also can impart control over drug release or target impaired tissue. Thanks to their unique optical, photothermal, and superparamagnetic features, NPs have been also utilized for the treatment of skin disorders, imaging, and biosensing applications. Despite the widespread transdermal applications of NPs, their delivery across the stratum corneum, which is the main skin barrier, has remained challenging. Microneedle array (MN) technology has recently revealed promising outcomes in the delivery of various formulations, especially NPs to deliver both hydrophilic and hydrophobic therapeutic agents.

Skin is responsible for enclosing and protecting the human body against the invasion of microorganisms, allergens, toxins, and UV irradiation [1]. Meanwhile, it serves as a pathway for administering therapeutics [2]. Compared to oral, nasal, intramuscular, and intravenous delivery routes, transdermal delivery (TDD) has immense advantages, such as pain-free administration over hypodermic injection, patients’ compliance, and self-administration [3]. Transdermal drug delivery systems (TDDSs) not only contribute to the continuous transport of therapeutic agents through the skin, but they also help the agent to overcome certain barriers (such as first-pass metabolism) and promote the transport of agents with low solubility and bioavailability [4]. However, passive skin transport is restricted to small lipophilic molecules.

Nanotechnology has been explored in TDD to enhance the permeation of therapeutic agents through the skin. Due to their small size and large surface area, nanoparticles (NPs) can deliver drugs across the stratum corneum (SC) without disrupting the skin barrier function via transcellular or trans-appendageal pathways [5]. Various types of nanocarriers have been reported in transdermal drug delivery. Carrier-free nanomedicines have shown low toxicity, enhanced drug solubility, and dissolution [6]. Lipid vesicles have gained interests due to their ability to deliver drugs by “free drug mechanism”. The released drug molecules can permeate into the skin due to the penetration enhancement mechanism of carrier component(s) interacting with SC lipids. Thanks to their miscibility with SC lipids, liposomes have shown great promise in TDD. However, their adherence to corneocytes can result in the leakage of encapsulated therapeutic agents at the superficial layers of skin. Hence, several vesicular carriers, such as Niosomes, Ethosomes®, Transfersomes®, Invasomes®, Vesosomes®, Proliposomes, and Pharmacosomes® have been introduced as reviewed before [5]. Nanoemulsions, either water-in-oil (W/O) or oil-in-water (O/W), can also enhance TDD due to their small droplet size and the constituent surfactants, which destabilize the SC lipid bilayer (Figure 1) [5]. Lipid NPs, especially nanostructured lipid carriers (NLCs), can efficiently load insoluble drugs and thanks to their high adherence to the SC, they can facilitate the drug penetration into deeper layers of the skin [7][8]. Polymeric systems, such as a polymer–drug conjugate, nanospheres, dendrimers, polymeric micelles, polymeric vesicles and microcapsules can sustain the release and skin retention of therapeutic materials for a prolonged period (Figure 1) [9][10][11]. Inorganic NPs and carbon nanomaterials, such as superparamagnetic iron oxides (SPIONs), titanium dioxide (TiO2), zinc oxide (ZnO), gold (AuNPs), silver (AgNPs), quantum dots (QDs), mesoporous silica nanoparticles (MSNs), carbon nanotubes (CNTs), graphene oxide (GO), carbon nanofibers (CNFs), and fullerenes have been recently applied in not only TDD, but also in the diagnosis or treatment of skin disease [12][13]. Despite recent progress in nanomaterials, the safety and biological fate of these NPs should be explored to develop efficient TDDSs. To improve the skin penetration of NPs, various techniques, including physical methods as well as chemical permeation enhancers, have been explored. Iontophoresis [14], dermaportation [15], sonophoresis [16], and microneedle arrays (MNs) [17] have been applied in the delivery of not only small and large therapeutic agents, but also various NPs through the stratum corneum (SC) [12]. With an emergence of the microfabrication techniques in mid-1990s, MNs have received enormous attention in TDD applications [18]. Since the advent of MNs, they have shown promising results due to their minimally invasive nature of penetration into the SC, which promotes the delivery of therapeutic agents. In recent years, different types of MNs, such as solid, hollow, coated, dissolving, and hydrogel-forming MNs, have been developed for transdermal drug delivery and cosmetic applications [19][20].

Nowadays, numerous NP formulations have been synthesized and explored for drug delivery to carry therapeutic agents, such as proteins, vaccines, and nucleic acids [21][22][23]. NPs exhibit numerous benefits, including unique size-dependent physicochemical properties [24][25], the protection of payload against chemical or proteolytic degradation, controlled release over prolonged times [26] as well as targeted delivery to specific parts of the body; hence, reducing the side effects [27]. To date, various administration routes (e.g., oral, nasal, subcutaneous, and IV injections) have been applied for the delivery of nanomedicines. The IV injection benefits from the fast onset of operation and high plasma level. Nevertheless, injections are associated with pain, infections (due to the poor maintenance of sterile conditions), and require a skilled person for administration [28][29], thereby alternative administration routes are needed for the more efficient and controlled delivery of active agents. TDD is a promising administration route that can minimize the complications associated with oral or IV drug administration. NPs are designed to affect the SC barrier function by modulating their special physicochemical properties. Due to their small size and large surface area, NPs can deliver drugs across the SC without disrupting the skin barrier function via transcellular or trans-appendageal pathways [8]. Carrier-free nanomedicines have shown low toxicity, high drug loading, enhanced solubility, and a dissolution rate [9]. However, due to presence of the SC, the translocation of NPs across the skin is still an enormous challenge. Consequently, the emergence of new strategies or the combination of present techniques can lead to overcoming the mentioned limitations.

Currently, MN technology has provided a versatile platform to increase the TDD of NPs in a minimally invasive way (Figure 2) [30]. In recent years, the intradermal delivery of NPs using MNs has gained a significant interest due to their unique abilities: (i) to facilitate transdermal administration, (ii) to deliver both hydrophilic and lipophilic therapeutic agents, (iii) to provide the homogeneous distribution of NP-based drug reservoirs into the skin, (iv) to combine therapeutic and diagnostic agents into one unique structure giving rise to a theranostic system. Table 1 summarizes a list of reports on MN’s applications in the TDD of NPs. A quick look at the research findings suggests a synergistic enhancement in skin permeation upon combining MNs with NPs due to the reversible barrier disruption function of MNs and subsequent controlled delivery of NPs [31]. For example, Ramadan et al. developed lamivudine-loaded polylactic-co-glycolic acid (PLGA) NPs and investigated their TDD in combination with stainless steel MNs. They showed that such a prolonged release system could overcome the short half-life of the drug. Furthermore, skin treatment with MNs can result in a two-fold enhancement in the steady-state flux, offering new transport pathways to increase the TDD of the drug-loaded NPs [32]. In another study, a layer of PLGA NPs containing vitamin D3 was coated on stainless steel MNs [33]. The MNs pierced the skin layer acting as a physical enhancer for drug molecules to be localized within the dermal region. Therefore, the dual delivery approach combining nanotechnology and MNs can improve TDD while promoting the sustained release of therapeutic agents. However, this action depends on the particle size, MN-induced pore size, and the skin ability to recover. Compared with drug-loaded NPs, a small-molecule drug is expected to penetrate through the pores left by MNs in the skin [34]. Moreover, compared with micron-sized particles, drug-loaded NPs can more easily pass the skin barrier through the MN pores. More recently, nanomedicine has received great attention for the treatment of various diseases using different approaches, such as chemotherapy, protein delivery, and gene therapy due to enhanced tumor accumulation, controlled cargo delivery, and increased intracellular uptake by NPs [35]. 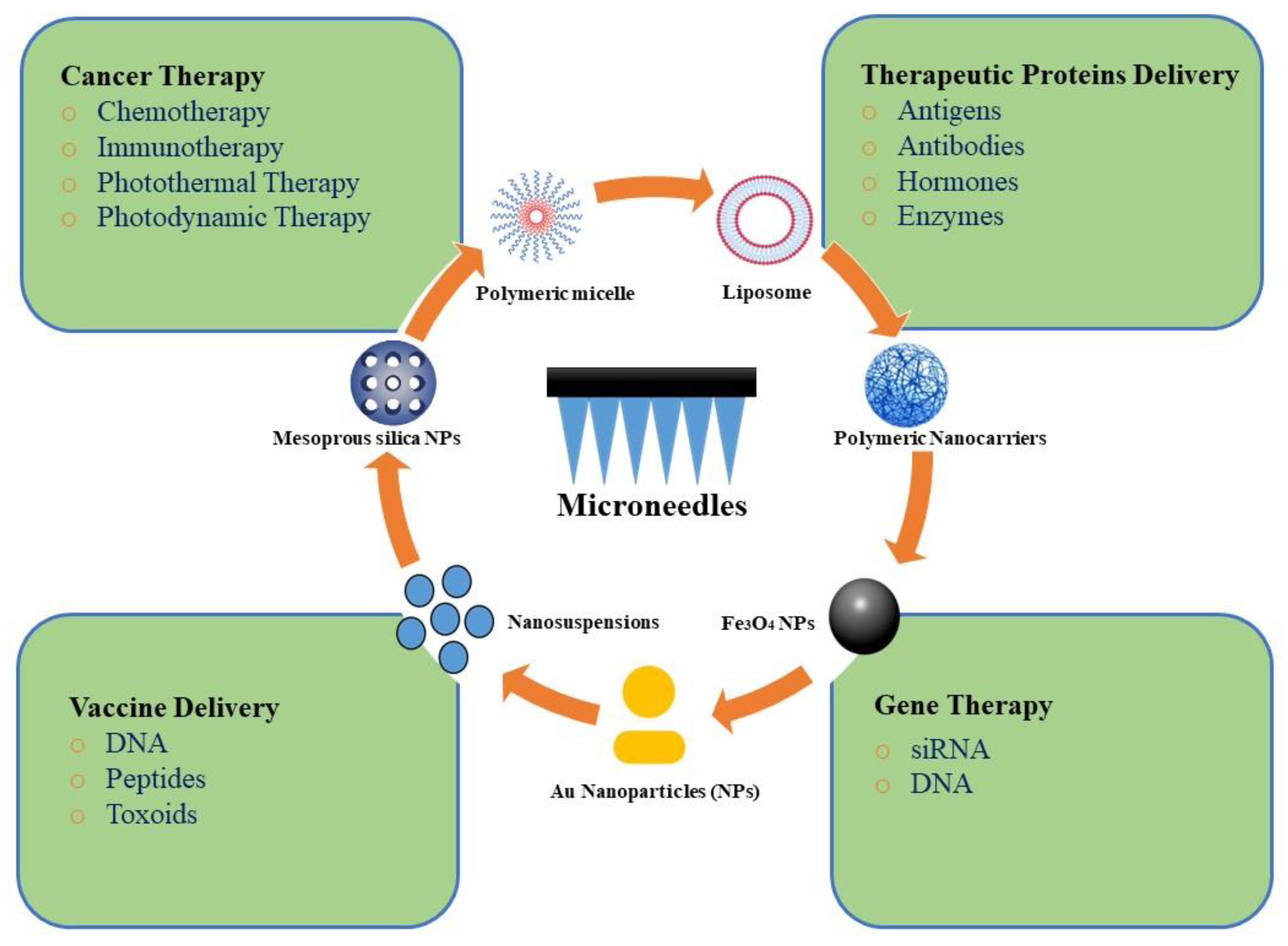