Cosmic rays were discovered over one hundred years ago but there are still unsolved problems. One of the hot problems is the origin of cosmic rays of the highest energies. Sources are still unclear and it is neither clear how particles gain ultra-high energies. Possible sources of cosmic rays at the highest energies are supermassive black holes. From this perspective we discuss in a popular form some recent developments in cosmic ray studies along with author’s recent results.
The paper also offers materials for further reading.

Cosmic rays were discovered by the Austrian physicist Victor Hess in 1912. For his study he used simple portable devices–electroscopes in balloons.

For this discovery, Hess received the Nobel Prize in Physics in 1936.

Later it was demonstrated that cosmic radiation consisted mainly of charged elementary particles (protons and electrons) and fragments of atomic nuclei (then a very small admixture of gamma quanta and neutrinos was found in cosmic rays). Cosmic particles arrive to Earth from space.

In 1930–1940s cosmic ray interactions with matter were studied intensively. These studies led to the discovery of new elementary particles.

We now turn from physics history to cosmic ray astrophysics.

Physicists use different types of instruments to detect cosmic rays. These detectors can be ground-based or installed on space satellites or at high altitude balloons.

Particles at energies up to 48 Joule (J) have been detected in cosmic rays. These energies are so high that no particle accelerator built on Earth is able to provide such energy, including the most powerful Large Hadron Collider.

It is worth mentioning that in particle physics and astrophysics the energy unit electron-volt (eV) is commonly used rather than Joule. So, the maximal energy of particles detected in cosmic rays is about 3×1020 eV.

Cosmic rays travel with gigantic velocities close to the speed of light. At lower energies particles also travel at the same speed.

Particles at energies lower than 2 × 1010 eV come from the sun, and they are called solar cosmic rays. At higher energies, up to 1017–1018 eV, they originate from outside the solar system in our Galaxy in supernova explosions, and are called galactic cosmic rays.

Cosmic particles at higher energies, more than 1019 eV, are called ultra-high energy cosmic rays (UHECRs). This scientific term contains no information related to the origin of cosmic particle. It indicates only the particle energy range. Years of research revealed that cosmic ray accelerators are astrophysical objects located outside our galaxy.

What are these objects and processes accelerating cosmic rays to ultra-high energies? In the paper we consider, in a popular form, supermassive black holes as possible sources of cosmic rays at the highest energies and discuss the results and problems related to the subject.

2. Particle Acceleration in the Vicinity of Supermassive Black Holes

Supermassive black holes have three areas where particles can be accelerated. They are the magnetosphere of a black hole, its accretion disc and jets. The accelerating mechanism in these areas can be different. We consider two possible mechanisms: Fermi acceleration and particle acceleration in electric fields.

The first mechanism was described by E. Fermi in 1949 (Fermi acceleration).

Before the description of how Fermi acceleration is applied in jets we discuss shocks on the jet surface.

Plasma blobs composing a jet are ejected from the disc through a funnel-shaped channel along the axis of disc rotation. Blobs fly across the disc during months and years (the time depends on disc thickness). All this time a blob interacts with channel sides, i.e., the disc matter, along with the disc emission, as the disc is filled with photons of various types.

On the blob surface interactions disturb some area giving the plasma a push. As a result the plasma layers moves along the blob and puts in motion layers in front. Propagating disturbance moving faster than the speed of sound, the shock front arises. What is a shock front?

A disturbance in plasma that moves faster than the speed of sound in the medium is called a shock wave. The boundary between the moving plasma and that which is motionless is sharp. It is called the shock front. The plasma density, pressure, temperature and velocity undergo an abrupt change over it.

A shock wave makes plasma in a blob move as a stream. A part of energetic particles in the stream cross the shock gaining energy.

Magnetic field is frozen in a plasma blob. There are areas in the blob that acts as scattering centers: their field is oriented in such a way that it deflects the flying particle towards the shock front. Thus the particle returns on it.

Particle motion in an inhomogeneous magnetic field near a shock front is shown schematically in Figure 1.

Figure 1. A particle motion in an inhomogeneous magnetic field near a shock front. The particle is shown by a black circle, the shock front is shown by dotted line, arrows indicate moving particle direction.

The simple case of particle acceleration by electric field is well known from textbooks: a particle with a charge q traveling a distance L in a uniform electrostatic field with a magnitude E gets energy W, equal to W = qEL.

In the accretion disc, particles can be accelerated as follows. In different places of the disc the plasma (with the frozen-in magnetic field) rotates at different speed (this is called differential rotation). As a result in some regions electromagnetic field grows explosively (faster than exponentially in time). These fields are capable of rapidly accelerating charge particles from the disc. For example, in a disc around a black hole with the mass of 108 Mʘ, particles can be accelerated to 1021 eV.

Finally, in jets, protons can be accelerated in the following process. Initially they are preaccelerated to relativistic energies by induced electric field in the magnetosphere. A rotating black hole creates the potential difference that is transmitted along magnetic field lines into the jet. Thus in the jet the voltage between the jet axis and the periphery exists. In the jet, preaccelerated protons can gain ultra-high energy passing the total potential difference between the jet axis and the periphery. This mechanism accelerates protons to 1021 eV, the maximal energy depending on the parameters that characterize the structure of the jet.

The voltage drop in many situations may be shorted out by plasma. For example, the electric field inside the main part of the disc is fully compensated by the volume charge of the plasma. Nevertheless, there can be regions in the disc where the density of the plasma is usually small. Most likely it takes place during a quiet phase of the supermassive black hole, in contrast to active stages in the black hole evolution. The strong electric field exists possibly without compensation in an area of spinning axis and magnetic poles. There is no compensation of electric field in the black hole magnetosphere: the rotating magnetic field induces the electric field, due to which electromotive force arises (electric currents flow) and the voltage drop is maintained as if by an electrical battery.

A particle is accelerated as long as it is confined in the accelerating region. Thus the size L of the essential part of the region containing the field B should be greater than the Larmor radius rL of a relativistic particle of charge Ze: L > rL. Considering gradual modes of acceleration with characteristic velocity of scattering centers β = v/c, B-L relation limiting a particle energy E is: BL > 2E/Zβ. From this relation the energy limit is: E ≤ 0.5 BLZβ (here B is in μG, L is in pc and E is in units of 1015 eV). 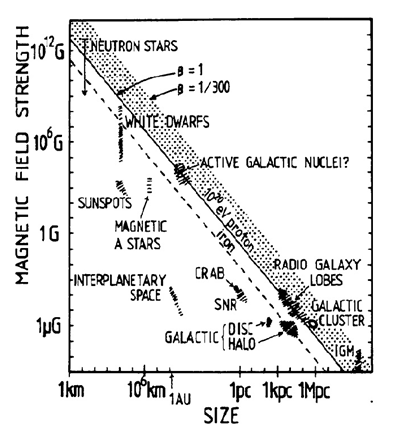 Figure 2. Size and magnetic field strength of possible sites of particle acceleration. Objects below the diagonal line cannot accelerate protons to 1020 eV. This is the plot from the classical article by Hillas, published in 1984 and no supermassive black hole sites are shown in it.

Many possible sites of particle acceleration were analyzed, from interplanetary space to clusters of galaxies, i.e., with sizes ranging from kilometers to megaparsecs, and the magnetic field ranging from 1 μG to 1012 G. Very few of them remain as possibilities. Supermassive black hole sites – jets, accretion discs, and magnetospheres - satisfy the Hillas criterion. Accretion disc size is L~1–10 pc, jets are of 1–10’s pc in length (can be longer) and the magnetic field is in the range B~10–103 G or higher.

In both acceleration mechanisms cosmic rays not only gain energy but also lose it. Why?

Magnetic field in space deflects particles (due to Lorentz force) and the particle trajectory bends. A particle moving along a curved path emits energy, which results in particle energy decreasing. In this case the particle emission is called synchrotron radiation.

Nevertheless particles gain ultra-high energy in the black hole vicinity. That is the result of theoretical studies of cosmic ray acceleration in possible sources.