Nanomedicine is a new and emerging research subject that aims to use nanotechnology with the pharmaceutical and biomedical sciences. The use of nanoparticles to develop new vaccines, diagnostic tests, and treatments for infectious diseases is a new alternative to solve important problems in some diseases caused by viruses. Arthropod-borne viruses (arboviruses) are a significant public health problem worldwide. Nanoparticles have been widely explored as new vaccine platforms, and vaccination is considered one of the most effective ways to control arbovirus diseases in the human population.

Nanoparticles (NPs) are defined as particulate dispersions or solid particles with a size between 10–1000 nm that demonstrate unique properties and functions due to their size [1][2]. Although nanotechnology is not a new concept, it has gained significant prominence in recent decades due to advances in materials science and nanoengineering, making it especially attractive for bioscience applications, such as drug and antigen delivery systems [3][4][5]. Nanoparticles based on organic and inorganic compounds have been widely explored as new vaccine platforms due to their ability to stimulate the immune system and provide sustained antigen release after vaccine administration [4][6][7]. Several studies have described the adjuvant properties of nanoparticles once they can co-deliver multiple agents in a single biocompatible platform, improving absorption and efficiency compared to conventional treatment [8][9]. Nanoparticles can also provide a controlled and slow release of antigens, creating a depot at the administration site providing potential protection against antigen degradation [10][11] (Figure 1A). 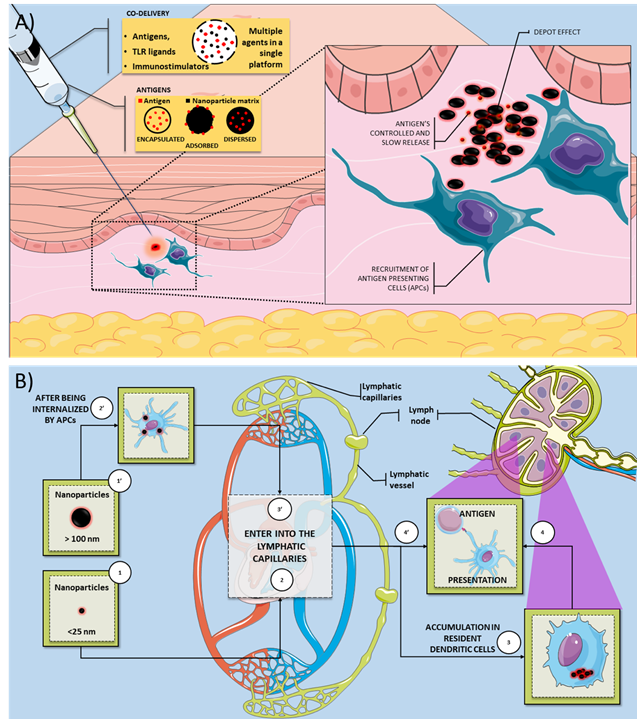 Figure 1. Overview of the mechanisms by which nanovaccines can induce an immune response. (A) Nanoparticles can be used as a vaccine platform for several infectious diseases since they can deliver antigens and several immunostimulatory molecules (TLR ligands and adjuvants). The antigen could be encapsulated, adsorbed, and dispersed on the nanoparticle matrix. The immunostimulatory activity of nanovaccines is related to several mechanisms, such as the depot effect, gradual release of vaccine antigens, and recruitment of antigen-presenting cells. (B) Smaller nanoparticles (<25 nm) are transported through the lymphatic system more quickly than larger particles (>100 nm). Smaller nanoparticles could accumulate in dendritic cells (DC) resident in the lymph nodes. These resident DC can process and present the antigen to T cells on the lymph node. In contrast, larger nanoparticles are efficiently uptake by APCs present or recruited on the injection site. These APCs can also process the antigen and migrate to the lymph node to present the T cells’ antigen. Legend: APC: antigen-presenting cell; DC: dendritic cells; TLR: toll-like receptor.

Nanoparticles have been extensively explored as new vaccines because they allow the antigens to be encapsulated, adsorbed, or dispersed in the nanoparticle’s matrix [1][12]. The nanoparticle matrix components’ choice is essential to modulate the antigen’s release during transport and at the injection site [2]. The biopolymers used on biodegradable nanoparticles can be natural, such as proteins and carbohydrates, or synthetic origin [13][14]. In general, natural biomaterials could have some advantages, such as biocompatibility, biodegradability, and low immunogenicity [15]. In addition to the various material possibilities for constructing nanoparticles, physical-chemical parameters (size, charge, and morphology) must be evaluated to optimize the nanoparticles’ functionality. Nanoparticle size can influence the in vivo distribution, toxicity, and the nanoparticles’ ability to act on the target cell and tissue [2]. For example, it has been reported that smaller nanoparticles (<25 nm) are transported through the lymphatic system more quickly than larger particles (>100 nm). Therefore, smaller nanoparticles could accumulate in dendritic cells in the lymph nodes (Figure 1B) [12]. Free versus cell-associated drainage of nanoparticles has a crucial effect on targeting cell populations by the differently sized particles [16][17]. Vaccine delivery systems with similar virus dimensions will facilitate antigens' direct interaction with follicular B cells [16][18]. The natural drainage of nanoparticles associated with antigens to lymph nodes may not be a prerequisite for the induction of B cell responses. However, it facilitates and enhances B cells' interaction with their cognate antigen and associated TLR ligands [18]. It was suggested that nanoparticles with a 20–200 nm range are most effective in inducing immune cell activation [18]. The shape and size of the nanoparticles also have a strong impact on the immune response's activation. This knowledge should be considered for rationally design and develop next-generation vaccines against pathogens. For example, an in vivo study report that spherical ovalbumin particles (193 nm in diameter) produced a Th1-biased response, whereas rod-shaped ovalbumin particles (1530 nm in length) produced a Th2-biased response [19].

Besides the shape and size, other properties, such as the surface charge, can be manipulated to achieve the desired benefits [13]. The surface charge of a nanoparticle is generally characterized by its zeta potential, reflecting the electrical potential. This parameter is influenced by the composition of the particle and the medium in which it is dispersed. The zeta potential can also be used to determine whether a loaded active material is encapsulated in the nanoparticle matrix or adsorbed on its surface [2]. While positively charged NPs can interact using non-specific interactions with the negatively charged phospholipid components of the cell membrane [20], negatively charged nanoparticles may represent a better strategy for targeting nanoparticles because they eliminate the non-specificity of the charge-load interaction [21][22]. Negatively charged NPs can also bind to cells using specific interactions, such as cellular receptors.

The successful translation of nanoparticles to the clinic requires developing a simple, safe, cost-effective, and eco-friendly synthesis mode. A better understanding of the safety mechanisms, biodistribution, and pharmacokinetics of NPs is also required. Additionally, it is necessary to understand the costs associated with scale production and verify if it is economically viable for the industry [23]. Although nanoparticles’ potential to act as new vaccines against infectious diseases has been identified [1][24], nanotechnology’s impact on developing new vaccines to prevent medically important arboviruses is unclear. In this context, it remains poorly understood if nanoparticles carrying arbovirus antigens can induce a protective immune response to these antigens.

Arthropod-borne viruses (arboviruses) are a major public health problem worldwide, especially in tropical and subtropical countries. The emergence of several arboviruses in diverse geographic regions has attracted the World Health Organization (WHO) attention and research worldwide. Several outbreaks of medically important arboviruses have been described in the last decade, with millions of people affected in different countries [25][26]. Several arbovirus species and the viruses belonging to the Flaviviridae and Togaviridaefamilies are the most frequent arboviruses that infect humans. Chikungunya virus (CHIKV), Dengue virus (DENV), and Zika virus (ZIKV) are transmitted to humans in urban cycles through A. aegypti mosquitoes and rarely cause mortality. However, the high number of annual cases and debilitation of some infected people make these diseases an economic and worldwide health problem [27]. Yellow fever virus (YFV) is also transmitted by Aedes aegypti (urban cycle) and Aedes africanus, Haemagogus, and Sabethes mosquitoes (sylvatic cycle), and this arbovirus have a high mortality rate. There is also an epizootic transmission of some arboviruses from animal reservoirs to humans. Japanese encephalitis virus (JEV), Venezuelan equine encephalitis virus, West Nile virus (WNV), Rift Valley fever virus (RVFV), Oropouche virus (ORPV), and Mayaro virus (MAYV) are examples of arboviruses that can usually infect humans and cause severe symptoms such as encephalitis [28][29].

Vector control is the most used measure against arboviruses. However, this strategy fails in several countries due to vector diversity, uncontrolled urbanization, and increasing resistance to insecticides [30]. Therefore, vaccination is considered one of the most effective ways to control arbovirus diseases in the human population [31]. While vaccines could potentially prevent arbovirus infection in humans, there are few licensed vaccines. The most successful case for arbovirus mass immunization is the use of vaccines to prevent yellow fever. This vaccine is a live-attenuated vaccine that induces a high percent of seroconversion (95%) on recipients after a single dose. However, some severe reaction cases after vaccination, such as viscerotropic infection, were described [32]. In contrast, there are other human diseases caused by arboviruses that do not have vaccines. Dengue is usually considered one of the biggest concerns about arboviruses, as it is estimated that around 390 million people are affected by dengue every year [33]. However, other arboviruses have been gaining attention. For example, we could cite ZIKV once infection with this arbovirus could be associated with neurological disorders in adults and newborns [34][35].

This leading role in infections caused by the DENV and ZIKV is also seen in vaccines’ development. In addition to the YFV that had its vaccine developed in the last century [36], the DENV is the only one that has a licensed vaccine and two more vaccine candidates in an advanced stage of development. It is estimated that 40 to 60 institutions worldwide work on around 20 ZIKV vaccine candidates adopting different strategies, such as inactivated viruses, VLPs, recombinant viruses, and DNA vaccines. Some of these have already reached phase II trials, although this virus only came into evidence in 2015 [31].

The CYD-TDV vaccine (Dengvaxia®—Sanofi Pasteur, Lyon, France) was approved for use in several countries for dengue disease. The World Health Organization (WHO) established that CYD-TDV is immunogenic and safe in seropositive individuals due to clinical trial data. However, this vaccine’s use on seronegative individuals could increase the risk of induction of severe dengue in those individuals due to an increased risk of antibody-dependent enhancement [37][38]. To date, several approaches have been developed toward generating vaccines for the other arboviruses, including live-attenuated strains, inactivated strains, subunit, RNA DNA, and recombinant proteins. However, most of these vaccine candidates are still in preclinical or clinical trials. Many of the vaccines that are under development or phase I trials were based on purified subunits, recombinant proteins, or other microbial components that are generally safe [27][38][39]. However, these antigens could be poorly immunogenic and therefore need the use of adjuvants and/or delivery systems to induce optimal immune responses [6][40]. One of the current vaccines ' main needs revolves around the development of new vaccines and delivery systems. Nanoparticles represent a promising strategy in the development of new efficient vaccine platforms [41].