Magnesium deficiency and stress are both common conditions among the general population, which, over time, can increase the risk of health consequences.  Clinical and pre-clinical evidence suggest that stress could increase magnesium loss, causing a deficiency; and in turn, magnesium deficiency could enhance the body’s susceptibility to stress, resulting in a magnesium and stress vicious circle.

Stress and magnesium deficiency are common health conditions among the general population[1][2]. Interestingly, clinical symptoms of magnesium deficiency and stress are very similar, notably fatigue, anxiety, irritability, nervousness, muscle cramps, gastrointestinal spasms and headache [3][4]. Of note, low magnesium status has been associated with stressful conditions, and conversely, chronic exposure to stressful stimuli results in magnesium loss [5]. This bidirectional cause-effect relationship between magnesium and stress was first described in the early 1990s [5][6] and referred to as the vicious circle. Nowadays, considerable pre-clinical and clinical evidence support the beneficial effect of magnesium supplementation in different types of stress.

Magnesium is an essential micronutrient for humans [7] involved in almost all major metabolic and biochemical processes (Figure 1), and acting as a cofactor in hundreds of enzymatic reactions [8]. About 50–60% of body magnesium is stored in the bones, with the remainder distributed in soft tissues such as muscles [9][10] and the brain [11][12]. Only 1% of the total magnesium is extracellular and 0.3% of this circulates in serum [13]. In clinical practice, normal serum magnesium values are considered to be within the 0.7–1.0 mmol/L range [14]. Magnesium deficiency is generally defined when serum concentrations drop below 0.7 mmol/L [15]. 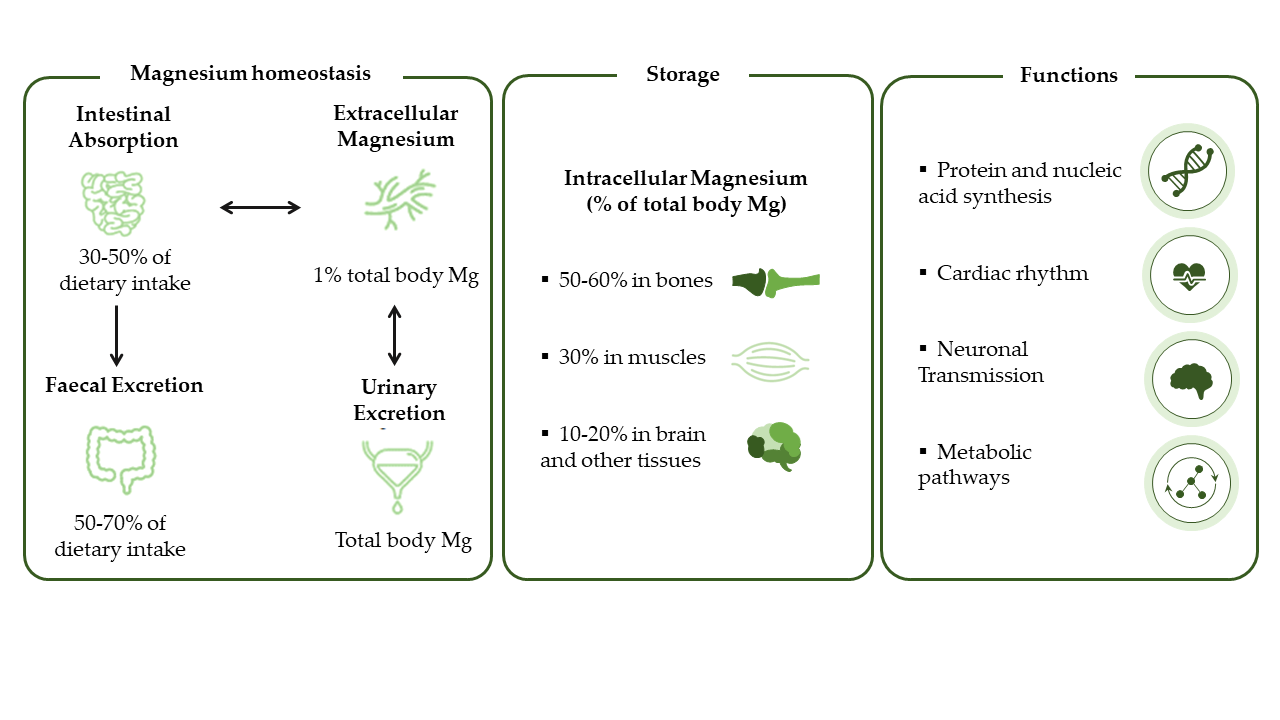 Among the factors contributing to magnesium deficiency (e.g. lifestyle; some medicines; pathological conditions), clinical evidence also suggest that chronic stress may cause magnesium loss [18][19][20][21]. A recent study found that nearly half (~44%) of the subjects screened for stress had chronic latent magnesium deficiency [22].

In addition, multiple studies have consistently shown that the dietary intake of magnesium is often inadequate and does not reach the recommended dietary allowances (Table 1) [3][23][24][25] across different countries worldwide [26][27][28]. This trend is further increased by the consumption of processed food typical of Western diets, with magnesium being depleted by up to 80–90% [3][15].

3. Stress and interaction with magnesium status

Stress is considered as an ongoing and adaptive system that enables an individual to assess, cope and predict constantly changing conditions. However, the capacity of this stress system is limited and can be overloaded, resulting in poor health outcomes, particularly those related to mental illness like depression or cognitive deficits [35]. The hypothalamic-pituitary-adrenal (HPA) axis and the autonomic nervous system, comprising of sympathetic nervous system (SNS) and parasympathetic nervous system (PSN), have been identified as the mediators of the so-called “neurobiological stress model” [36][37][38]. In this model, important mediators like catecholamines (released from the sympathetic nerves and the adrenal medulla), together with the glucocorticoids (mainly cortisol, released from the adrenal cortex) regulate the stress response [36][37]. Cortisol also interacts with the serotonergic pathway and modulates the release of serotonin (5-hydroxytryptamine or 5-HT) neurotransmitter in response to acute or chronic stressors [39]. In addition to the regulation through feedback mechanisms, the HPA axis is also modulated by other central systems, particularly by the inhibitory action of the γ-aminobutyric acid (GABA), and the excitatory effect of glutamate [40].

The generalized unsafety theory of stress (GUTS) is a new psychological and cognitive theoretical model proposed by Brosschot in 2016 [41] that revises and expands the stress theory. Based on neurobiological and evolutionary evidence, GUTS hypothesizes that stressors are not necessary for a chronic stress response to occur but the perception of an unsafe state is enough. In GUTS, PNS is the key system controlling the stress response (particularly the vagus nerve and the prefrontal cortex activity) [41]

Of note, magnesium interacts with all the stress mediators mentioned above [11][42][43][44] overall serving an inhibitory function in the regulation and central neurotransmission of the stress response (neurobiological model), or by modulating the autonomic nervous system (GUTS model) [45][46][47]

Table 2. Summary of the pre-clinical and clinical evidence supporting the impact of stress on magnesium homeostasis.

Table 3. Summary of the pre-clinical and clinical evidence supporting magnesium status on stress susceptibility. a Only symptoms shown in ≥70% of women at baseline are reported.

4. Proposed model for the vicious circle of stress and magnesium deficiency

In summary, magnesium acts on several key physiological steps involved in the response to stressful stimuli, and also exerts long-term neuroprotective and anti-oxidant effects against stress

In response to a stressful stimulus, stress hormones are released causing an increase of magnesium extracellular levels [36]. As a consequence, higher magnesium concentrations are excreted through the kidneys [57]. When the stressor persists over time, this mechanism may contribute to magnesium (intracellular) depletion and deficiency [56][65], and trigger the stress and magnesium vicious circle as illustrated in Figure 2. To conclude, while there is good evidence from animal and human studies of the bi-directional link between magnesium and stress, further research is needed to better understand the impact of this correlation and the benefit of magnesium supplementation on general health. This research is fundamental to further support adequate magnesium dietary needs, particularly in the stressed population.