Hyponatremia, usually defined as serum sodium concentration < 135 mEq/L, is the most common electrolyte abnormality encountered both in hospitalized patients and in the general population and is associated with increased morbidity and mortality.

The rapidity and the degree of reduction in serum sodium concentration are the main determinants of the symptoms associated with this electrolyte disorder. In the setting of acute (<48 h) or severe (serum sodium levels < 120 mEq/L) hyponatremia, patients’ symptoms may range from non-specific nausea, vomiting, and headache to life-threatening stupor, coma, seizures, respiratory depression, and death. Chronic moderate (serum sodium levels 120–129 mEq/L) and mild (serum sodium levels 130–134 mEq/L) hyponatremia are usually asymptomatic and have no remarkable findings on a conventional clinical examination. However, individuals with such sodium levels may develop subtle manifestations, e.g., fatigue, cognitive impairment, disorientation and gait disorders, as well as falls, osteoporosis, and fractures [1][2]. The incidence of hyponatremia varies extensively in different studies mainly depending on the definition of hyponatremia and the patient population. Thus, an incidence of 7.2% has been reported in the general population, while it may reach up to 42.6% in hospitalized patients [3].

Hyponatremia may be encountered in several hematological diseases, both benign and malignant [4][5]. In a study including hospitalized children treated for acute lymphoblastic leukemia (ALL), the incidence of hyponatremia (serum sodium levels < 130 mmol/L) on at least 2 out of 3 consecutive days was 11.9% [6][7][8][9]. Moreover, hyponatremia was significantly related both to neurologic complications and the existence of obvious central nervous system leukemia at diagnosis [6]. In another single center analysis of 140 pediatric patients, hyponatremia was observed in 40% of patients following hematopoietic stem cell transplantation (HSCT) [7]. A large retrospective cohort analysis of patients diagnosed with particular cancer types showed that, in patients with lymphoma, the incidence rate of euvolemic and hypervolemic hyponatremia was 395 per 1000 person-years [8]. Of note, one recent experimental study illustrated that low extracellular sodium concentration may promote carcinogenesis in vitro by upregulating molecular pathways involved in oxidative stress, proliferation, and invasion [9].

The importance of recognizing, evaluating, and treating hyponatremia in hematologic patients lies in the fact that it is an independent predictor of unfavorable outcomes both in patients with neoplastic and benign disorders, including lymphomas, sickle cell anemia, hemolytic uremic syndrome, and allogeneic hematopoietic SCT (AlloSCT) [5][8][10][11]. In addition, symptoms of hyponatremia such as fatigue, disorientation, or even falls can be mistakenly attributed to other causes, such as neutropenic sepsis or central nervous system (CNS) involvement in the context of the underlying hematological disease.

Patients with hyponatremia frequently manifest severe neurologic complications due to brain edema. On the other hand, the rapid correction of hyponatremia may lead to the development of central demyelinating lesions, particularly in the pons (a disorder called central pontine myelinolysis or osmotic demyelination syndrome (ODS)) with major neurologic disabilities or even death [12]. Consequently, the timely recognition of the underlying cause(s) of hyponatremia is crucial for the appropriate management and avoidance of therapeutic pitfalls, which can lead to under- or over-treatment of hyponatremia. A step-by-step diagnostic evaluation of hyponatremia in hematologic patients is shown in Figure 1. Some points, however, deserve emphasis. 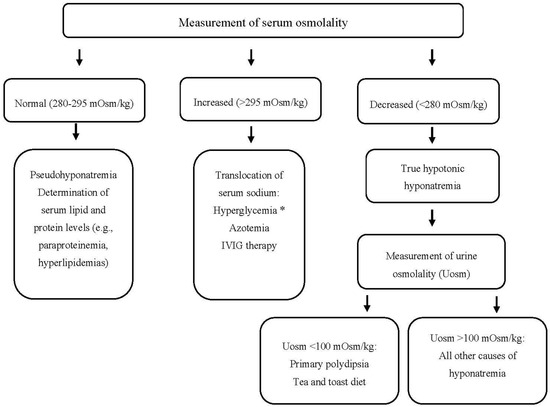 Figure 1. Approach to a patient with hyponatremia (and hematologic disease). * Serum sodium should be corrected for the degree of hyperglycemia. IVIG: Intravenous Immunoglobulin, mOsm: milliosmole, Uosm: urine osmolality.

Urine sodium concentration (UNa) in a random urine specimen has a pivotal role in the diagnostic approach. Values less or more than 30 mEq/L are suggestive of low effective arterial blood volume or SIADH, respectively. However, UNa levels > 30 mEq/L are also found in case of diuretic administration, osmotic diuresis, salt losing nephropathy, primary adrenal insufficiency, and metabolic alkalosis. On the other hand, UNa < 30 mEq/L can be observed in patients with chronic SIADH on a low salt diet or anorexia. In the presence of metabolic alkalosis, a low urine chloride concentration (<25 mEq/L) is a useful index of extracellular volume depletion [13].

Hyponatremia due to SIADH and CSWS may be observed in hematologic diseases with intracranial involvement [14]. The latter has a similar laboratory picture with SIADH (i.e., hypouricemia along with a fractional excretion of uric acid (FEUA) > 11%, Una > 30 mmol/L and Uosm > 100 mOsmol/kg). Importantly, though, the treatment is not the same due to the different volume status in these disorders (i.e., normovolemia in the case of SIADH versus hypovolemia in the case of CSWS). The differentiation between CSWS and SIADH is often challenging in clinical practice, since the assessment of extracellular volume, not infrequently, is unreliable on clinical grounds. In fact, clear evidence of volume depletion (e.g., hypotension, decreased skin turgor, elevated hematocrit, increased blood urea nitrogen to creatinine ratio) is frequently absent in CSWS. Thus, in a seemingly normovolemic patient with hyponatremia associated with “intracranial disease”, fluid restriction, loop diuretics, and vaptans (ADH antagonists) used for the treatment of SIADH should be avoided, as they may deteriorate both hypovolemia and hyponatremia, leading to cerebral edema and even seizures in case of CSWS [15]. On the contrary, hypertonic saline should be administered in such cases. The estimation of FEUA after correcting hyponatremia is considered a useful tool in establishing the correct diagnosis given that FEUA normalizes in SIADH but remains > 11% in CSWS. Noteworthy, isotonic saline may aggravate hyponatremia due to SIADH if the Uosm is higher than serum osmolarity (especially in cases of Uosm > 530 mOsm/kg), thus, it should be avoided [14][16].

Hypopituitarism with secondary adrenal insufficiency is another overlooked cause of hyponatremia often presenting with a SIADH-like picture (euvolemic hyponatremia, low serum uric acid, and urea levels, UNa > 30 mmol/L, Uosm > 100 mOsmol/kg). Moreover, the differentiation between primary and secondary adrenal insufficiency are not infrequently difficult given that typical characteristics ascribed to mineralocorticoid deficiency, may not be present in the latter. Indeed, hyperkalemia may be absent in approximately 30–50% of patients with Addison’s disease, while hypovolemia as clinically assessed may not be evident. In such cases, certain diagnostic tests (cortisol determination and adrenocorticotropic hormone (ACTH) stimulation test) may be required for the diagnosis of hypothalamic–pituitary–adrenal axis disorders [17].

Finally, it should be pointed out that hypothyroidism-induced hyponatremia is rather rare and probably occurs only in severe hypothyroidism (TSH > 50 mIU/L). Even in myxedema coma, however, other possible causes and superimposed factors of hyponatremia (e.g., drugs, infections, adrenal insufficiency) should be considered before attributing the low serum sodium levels to hypothyroidism per se [18]. An algorithm for the proper approach to a patient with hypotonic hyponatremia, Uosm > 100 mOsm/kg, and hematologic disease is shown in Figure 2.

Treatment of hyponatremia is mainly focused on how to avoid the devastating neurologic complications, which may occur either during the course of or after overcorrection of this electrolyte disorder. The appropriate rate of correction of hyponatremia should be <8–10 mEq/L/24 h [12][19]. However, in the presence of conditions that predispose patients to develop ODS (i.e., hypokalemia, malnutrition, liver disease, alcoholism, and serum sodium levels ≤ 105 mEq/L), the appropriate rate of correction should be limited to 4–6 mEq/L/24 h [12][19][20]. As a general rule, the therapeutic interventions for hyponatremia are based on its duration, as well as on patient’s symptoms and extracellular volume status [21][22].

In cases of severe neurological symptoms due to hyponatremia a bolus infusion of 100–150 mL of hypertonic saline (3% NaCl) over 20 min, up to three times is recommended [19][20]. The goal is an increase in serum sodium concentration by 4–6 mEq/L within the first 4–6 h in order to reverse the symptoms of hyponatremic encephalopathy, without, however, exceeding the aforementioned targets. Continuous infusion of 3% NaCl (0.5–2 mL/kg/hour) can be used for moderate symptoms [19][20][23][24].

Treatment of the underlying conditions related to hyponatremia (e.g., infections, hyperglycemia, primary adrenal insufficiency) and discontinuation of diuretics are crucial in the management of hypovolemic hyponatremia. Normal saline or lactated Ringer’s solution should be used to restore the intravascular volume [20][25]. Close monitoring of serum sodium levels (every few hours) and urine output is strongly recommended in order to avoid an overly rapid increase in sodium concentration when volume status is restored. In this setting, an abrupt decrease in ADH secretion and, subsequently, a rapid increase in diuresis is observed. Noteworthy, in hypovolemic states, any potassium deficit should also be corrected. In such cases, potassium chloride should be added in hypotonic fluids. The administration of normal saline plus potassium chloride (i.e., a hypertonic solution) should be avoided, as it increases the risk of overcorrection of hyponatremia as well as that of volume overload and pulmonary edema, especially in the elderly or in patients with HF [25].

Fluid restriction is the first line therapy in hyponatremia due to SIADH. Discontinuation of the offending drugs and treatment of other superimposed factors (e.g., infection, pain, nausea) are also essential. Increased solute intake (such as salt tablets or urea) and loop diuretics can also be used to increase water clearance.

In contrast, restriction of fluid intake and administration of loop diuretics to correct increased total body water and sodium are required for the treatment of hypervolemic hyponatremia. Vaptans—drugs which promote water diuresis—are indicated as second-line therapy for hyponatremia related to hypervolemic or euvolemic hyponatremia due to SIADH [22]. Importantly, vaptans should not be used in hypovolemic hyponatremia or together with hypertonic saline solution owing to case reports of associated ODS [19][20][26]. Edematous hyponatremia, in the context of severe acute or chronic kidney injury generally, requires dialysis. Basic principles of hyponatremia management are shown in Table 3.