The enteric nervous system (ENS) developed in evolutionary terms independently and earlier than the central nervous system (CNS)[1]. With its 200–600 million neurons in humans, the ENS contains as many neurons as the neural tube and is, therefore, considered the largest part of the peripheral nervous system (PNS)[2]. The ENS is a complex, autonomous nervous system which coordinates all bowel functions[3]. It is connected with the CNS via the sympathetic, parasympathetic and sensory system. Most prominent is its connection to the brain by the vagus nerve for the communication of content composition and hunger[4][5]. In this way, stimulation of the CNS by the gut influences hippocampal learning and memory and regulates motivation and emotions[6][7]. A key component are the gut bacteria. The gut microbiome heavily interacts with the ENS and influences gut physiology[8][9]. The ENS modulates immune cells within the gut wall, which influence the microbiome and the formation of cancer, abdominal pain and neurological disorders such as Parkinson’s disease[10][11][12][13][14][15][16]. The diversity in neuronal and glial subtypes, as well as the diversity of neurotransmitters, is comparably rich as in the CNS[17]. Not all aspects of neuron-glia interaction are fully understood yet, but it is evident that in both systems, physiological neural development and function depend on their functional interaction[18][19]. In the CNS, neurons and glial cells influence each other during maturation and function. Glial cells promote neurogenesis, coordinate neuronal migration, axon growth, the formation of synapses and are involved in neural circuit functions[19]. Glia are themselves regulated by neurons which modulate their transcriptome and numbers, probably to shape the neural networks in the brain[20]. In the ENS, glial cells are similarly crucial for neuroprotection, neural maturation, synapses formation, as well as the release and degradation of neurotransmitters[18][21][22].

The multipotent stem cells of the CNS are the radial glial cells, which may differentiate into glia and neurons[23]. In the ENS, compatible functions are fulfilled by enteric neural crest-derived cells (ENCC), which represent the enteric neural progenitor population[24]. Enteric neurons are distributed along the digestive tract in two different plexuses of ganglia: the submucosal plexus, and the myenteric plexus (Figure 1a). The submucosal plexus consists of a concentric arrangement of enteric ganglia in the submucosa, the tissue layer adjacent to the luminal epithelium. The myenteric plexus is dispersed between the circular and longitudinal smooth muscle layers of the enteric canal. Several signalling pathways are associated with plexus patterning (Sonic hedgehog (SHH), bone morphogenic protein 2 and 4 (BMP2 and 4) Netrin), neural differentiation (Neurotrophin-3, BMP2, 4), gliogenesis (Neuregulin 1 (GGF2), Notch) and axonal growth (Semaphorin 3A, Neuturin)[25]. However, on what stage of differentiation these molecules act and how they interact with each other remains mostly unknown.

2. Neurons and Glial Cells in the Adult ENS

Postnatally, the ENS matures in allegiance with the establishment of gut functionality and motility[26]. This includes the generation of synapses between glia and neurons. In newborn P1 rats (postnatal day 1), only a few synaptic contacts, as marked by the presynaptic marker synapsin I, were identified. From P7 onwards, robust synapsin I labelling in glia was observed, which was paralleled by an increase in GFAP (marking glia maturation) and further increased in guts of P21 and P36 rats[18]. This might imply that glia maturation is linked to neuronal connectivity in the ENS. This finding is consistent with the response of electric field stimulation, between P7 and P14 in enteric colon myenteric neurons of newborn rats[27]. Coordinated matured colon mobility was detected from P10 on.

The gut microbiota controls glial development and homeostatic renewal throughout the adult life. Consequently, antibiotic treatments impaired glial homeostasis. The exact mechanism remains enigmatic, but one factor that links the microflora and the ENS are macrophages. Macrophages have a haematopoetic origin and colonise the embryonal gut independently of the ENS. Distinct types of macrophage exhibit different transcriptomes, linked to specific functions and locations. Mucosal macrophages modulated gut homeostasis and secretion by the interaction with neurons and blood vessels. In contrast, myenteric macrophages influenced ENS formation directly via the secretion of BMP (bone morphogenic proteins) molecules. In turn, enteric glial cells activated intraganglionic macrophages via connexin 43 channels and the secretion of macrophage colony-stimulating factor (CSF). Further, they regulated group 3 innate lymphoid cells and thereby orchestrated gut defence[10]. Commonly, enteric glial cells are part of a tight regulatory circuit between the microbiota and the immune system[3].

The ENS is exposed to mechanical and chemical stress and damage. Therefore, some regeneration mechanism seems evolutionarily implemented. Several partly conflicting reports tried to identify the precise nature of this mechanism. Some indicate that the gut harbours a stem cell population. Approximately 1% of isolated gut cells form neurosphere-like bodies in culture and show an extensive self-renewing capacity (Figure 4a)[28][29][30][31]. These multipotent progenitors are p75NTR and Nestin-positive and were isolated from fetal mice and rats up to adult stages (P22)[28][29]. The efficiency in generating multiple subclones with neuronal, glial and myofibroblast identity decreased with age. In progenitors from older individuals, mostly glial clones were formed[28]. Furthermore, the total number of clones and the proliferation rate of isolated stem cells decreased (P22 as compared to fetal stage E14) [28][29][31]. It is still controversial as to whether or not these cells are true ENCC-like stem cells or only display a stem cell phenotype if isolated and seeded in a host gut or are grown in culture. If these cells contribute to neurogenesis under normal conditions in vivo remains enigmatic. Joseph and colleagues found no adult neurogenesis during homeostasis, ageing, pregnancy, diet changes, hyperglycemia, exercises, inflammation, irradiation, neurotoxicity, partial gut stenosis and glia ablation[31]. Instead, they reported gliogenesis in homeostasis and allostasis (Figure 4b). 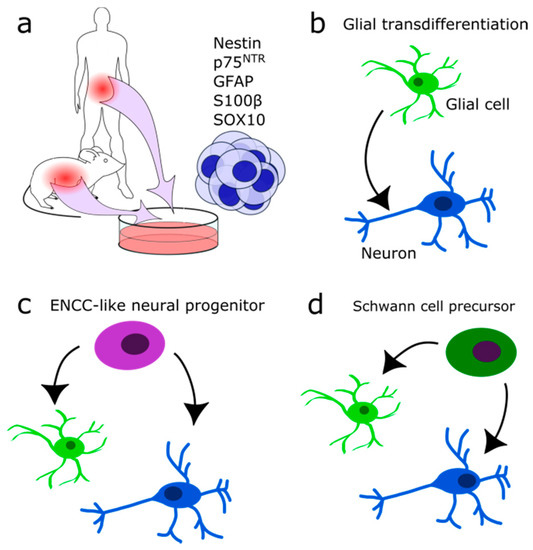 In contrast, Kulkarni and colleagues reported neuronal apoptosis and the occurrence of physiological neurogenesis in the adult mouse intestine[32]. NOS-expressing neurons were genetically labelled by the expression of tdTomato red fluorescent protein after tamoxifen injection (NOS1-creERT2:dtTomato mouse line). Seven days later, new neurons were found lacking the tdTomato protein, indicating the formation of new neurons. Apoptotic neurons were identified by Caspase 9 expression at a rate of 4–5% cell loss per day. A Nestin/p75NTR coexpressing subpopulation which did not express neural markers was suspected of having progenitor quality and of replacing lost neurons (Figure 4c). Therefore, Nestin expressing cells were followed in vivo and found to form neurons in the adult myenteric ganglia [32]. According to their results, enteric neurons are replaced every two weeks. Despite opposing results, both studies found similar glial typic markers expressed by their enteric neural precursor cells: p75NTR, Gfap, S100β, and Sox10[31] vs. Nestin, p75NTR, partially Gfap or S100β but not Sox10 [32]. Others reported adult neurogenesis to occur in vivo only upon stimulation of the 5-HT receptor and chemical or mechanical injury[33][34][35][36][37]. It remains to be investigated if there exists a difference between normal healthy homeostasis and disease or if it is due to the experimental set-up.

Besides resident adult ENCC-like progenitors or stem cells, one potential source for adult neurogenesis could be the Schwann cell precursors (SCP) (Figure 4d). Developmentally, they are multipotent and form among other cell types enteric and parasympathetic neurons[37][38]. Generally, ENS formation from neural crest cells (NCC) is conserved in higher vertebrates. In zebrafish, new neurons are generated exclusively by SCPs during growth or after injury[36]. In evolutionary terms, SCPs might be the primary source for enteric neurons[39]. A study in the jawless vertebrate sea lamprey (Petromyzon marinus) revealed that in lower vertebrates the vagal NCC population is absent, and the entire ENS is formed by SCPs derived of trunk NCCs[39].

Often, simple model organisms are helpful to study developmental or evolutionarily conserved processes. Besides in mice, many studies in the ENS were performed on chicken embryos which offer embryonic manipulations in ovo. External developing aquatic animals like fish, amphibians or the sea lamprey are directly accessible, and with their simple body organization, are easy to observe and analyze. For example, the straight and short gut of the sea lamprey or the axolotl embryo (Ambystoma mexicanum), makes it easy to follow ENCC migration and ENS formation in vivo.

Other potential sources for adult neural progenitors are the enteric glial cells (Figure 4b), which may transdifferentiate into neurons upon injury or in culture, comparable to the glia of the CNS[40][41][42]. Mice induced by dextran sodium sulfate or Citrobacter rodentium induced colitis displayed Sox2 and Plp1 expressing glia directly transdifferentiating into neurons. They did not dedifferentiate or enter the cell cycle again beforehand[40]. Likewise, in patients with colitis induced by Clostridium difficile or ulcerative colitis, on average, 14% of newly formed neurons are derived from glia in response to the infection[40]. Consistently, an induction of colitis in vitro increased the amount of neurons[36]. There, an increase in glial cell proliferation in the absence of an accompanying increase in the amount of glial cell numbers was reported. This lead to the hypothesis that enteric glial cells are a source of newly generated neurons.

Initially, cultivated enteric neural cells express the glia marker Gfap, and only a fraction expressed the neuronal marker βIII tubulin or both markers. After six days, most isolated cells coexpressed Gfap and βIII tubulin[41]. In vivo, glia markers were never reported to colocalise with neuronal markers. This might be due to environmental cues and the influence of surrounding muscle, connective tissue and immune cells. Accordingly, enteric glial cells cultivated on a 3T3 mouse embryonic fibroblast feeder layer were limited in their potential to differentiate into neurons[41] . In particular, laminin, a prominent protein of the extracellular matrix and secreted by fibroblasts, inhibited glial transdifferentiation. In a neuronal cell culture system with indirect co-culture of glia, secreted molecules promoted the formation of synaptic connections between neurons. This effect is mediated by molecules of the purinergic P2Y1 receptor- and GDNF-pathway (glial cell-derived neurotrophic factor)[18]. However, glia have a limited effect on neural differentiation in vitro. In the co-culture system, the number of ganglia and the number of neurons per ganglion is not influenced by the presence of glia.

Previously, it has been concluded from a series of preceding studies, that glial cells have an essential role in maintaining gut epithelial function. Enteric glia were eliminated by the generation of transgenic mice which harbour the thymidine kinase gene of the Herpes simplex virus under the control of the Gfap promoter[43][44]. The antiviral agent ganciclovir (GCV) was injected into these mice. Glial cells metabolised the GCV into a cytotoxin by the thymidine kinase, resulting in glial cell death. After GCV administration, transgenic mice showed an increased gut epithelial permeability and crypt cell proliferation in the jejunum, accompanied by bowel inflammation[44]. As we know now, not all enteric glial cells express Gfap and its expression changes over time[45][46][40]. Therefore, these classic experiments have been repeated. Now, the expression of the diphtheria toxin subunit A gene was controlled by the Plp1-promotor to induce glial cell death in the entire population[47]. In this approach, glial cells were broadly eliminated, but no inflammation was observed. Epithelial histology and barrier permeability remained healthy, and no microbial translocation through the barrier could be reported. In female, but not in male mice, gut motility was impaired. In contrast to the Plp1CreER; Rosa26DTA model, the GfapHSV-TK model showed a rare expression of Gfap in epithelial cells and diffusion of toxins into neighbouring cells. Together, this explains the previously reported epithelial barrier damage[47].