Cyanobacteria (blue-green microalgae) are ubiquitous, Gram-negative photoautotrophic prokaryotes. They are considered as one of the most efficient sources of bioactive secondary metabolites.

Cyanobacteria (blue-green microalgae) are ubiquitous Gram-negative photoautotrophic prokaryotes, for which evidence they existed 3.3–3.5 billion years ago was found [1]. They exist in the environment as unicellular, filamentous or colonial forms surrounded by a mucilaginous sheath [2]. Owing to their ubiquitous nature and the vast diversity of their metabolites, they have several applications in the biomedical field. During the last few decades, the emergence of new cancers and their developing resistance to available drugs has led to chemotherapeutic failure. Thus, the identification of new biologically active compounds is immediately required for the development of new drugs. In this regard, the medicinal properties of cyanobacteria have been explored. To date, several secondary metabolites have been isolated from the members of oscillatoriales (49%), followed by nostocales (26%), chroococcales (16%), pleurocapsales (6%) and stigonematales (4%) [2][3]. The capacity of cyanobacteria to integrate non-ribosomal peptide synthetases with polyketide synthases enables them to produce biologically active and chemically diverse compounds, such as cyclic alkaloids, peptides, depsipeptides, cyclic depsipeptides, fatty acid, lipopeptides, swinholides and saccharides [4]. Back in 1500 BC, Nostoc sp. was first used to treat gout, fistula and different types of cancers [5]. However, more focused research utilizing modern technologies was started in this field in the 1990s. Several cyanobacteria species are cultivated in commercial platforms to extract bioactive compounds, which have been shown to possess anticancer activity and potentially kill a variety of cancer cells via the induction of apoptosis or altering the activation of cell signaling [4][6] (Figure 1). 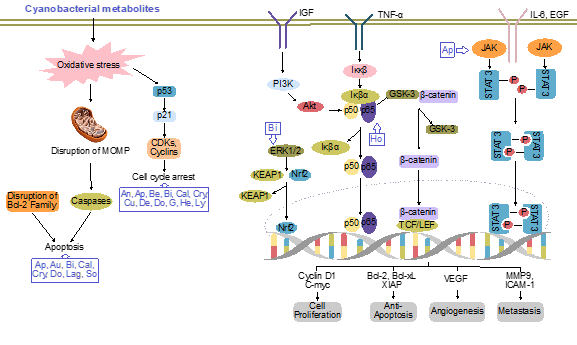 2. Cyanobacteria as Nanoformulations in Cancer Therapies

Globally, the use of nanomaterials in the biomedical field has attracted the increasing interest of researchers because of their unique ability to interact with cells and tissues at the molecular level with a high degree of specificity and improved efficacy. The small size (ranging from 1 to 100 nm), design flexibility and large surface-to-volume ratio make these materials of significant use. With the appreciation of the enhanced properties of metals at nanosizes, extensive research on different nanometals has been carried out in recent years for exploring their applications in cancer research. Emphasizing the biological synthesis, cyanobacteria are considered as one of the best biological systems for nanoparticle (NP) synthesis, both intra-cellularly as well as extra-cellularly [8]. However, there are only a few reports available on the biological synthesis of noble metal NPs utilizing cyanobacteria as the host system. Silver (Ag) is the most commonly reported NP synthesized [8][9][10]. Besides this, gold (Au), palladium (Pd) and platinum (Pt) NPs of well-controlled size are also formed from cyanobacteria such as Anabaena, Calothrix, Leptolyngbya, etc. [10]. Moreover, several cyanobacterial strains have been used to synthesize selenium NPs (11.8 to 60 nm) [11]. Furthermore, Spirulina subsalsa has been utilized for the extracellular synthesis of Ag and Au NPs [12].

Very few studies on the above have suggested that these NPs could be used for the treatment of cancer. Recently, silver NPs (AgNPs) synthesized from the aqueous extract of Oscillatoria limnetica have exhibited cytotoxic effects against human breast (MCF-7) and colon (HCT-116) cancer cell lines with IC50 values of 6.15 μg/mL and 5.37 μg/mL, respectively [13]. In another study, silver nanoparticles (20–50 nm size) synthesized from L. majuscula were screened against three leukemic cell lines, i.e., K562, MOLT-3, and REH, and showed dose- and time-dependent anticancer activity. The REH cells showed the maximum sensitivity to AgNPs, with an IC50 value of 620 ± 3.73 μg/mL [14]. Moreover, AgNPs (51–100 nm size) synthesized from the cell extract of the cyanobacterium Nostoc sp. strain HKAR-2 showed a dose-dependent cytotoxic activity against MCF-7 cancer cell lines, with an IC50 of 27.5 μg/mL [15]. The phycocyanin extracted from Nostoc linckia synthesizes silver nanoparticles (9.39 to 25.89 nm). These AgNPs exhibit in vitro antitumor activity against the human breast MCF-7 cancer cell line (IC50 = 27.79 ± 2.3 μg/mL), and were shown in vivo to inhibit tumor growth in Ehrlich ascites carcinoma-bearing mice [8]. ZnO NPs synthesized by using the cell extract of the Nostoc sp. EA03 exhibit less cytotoxicity when used in lower concentrations against the human adenocarcinoma alveolar basal epithelial cells (A549 cells) and human lung fibroblast (MRC-5 cells) cancer cell lines [16].

Previously, green carbon nanotags (G-tags) developed from cyanobacteria were shown to be an advanced and efficient imaging platform for anticancer therapy due to their high solubility, excellent photostability and low cytotoxicity. These nanotags, when conjugated with doxorubicin, not only induced cell death in cancer cells (HepG2 and MCF-7), but also, the fluorescence of G-tags enables the monitoring of doxorubicin uptake by cancer cells and their intracellular location [17]. Similar studies could also be carried forward by conjugating cynobacterial metabolites with nanotags, or the nanovectorization of canonical anticancer drugs using cynobacteria to enhance the anticancer potential of the drug. Cynobacterial metabolites from Spirulina showed protective effects against the cardiotoxicity induced by doxorubicin, and thus improve the therapeutic index of doxorubicin [18]. Similarly, the biochemical protective effects of Spirulina platensis against oxidative stress caused by doxorubicin were also evaluated [18]. These could find future applicability, with a better shelf-life and stability as natural capping occurs [19].