Purple tomatoes represent a recent variant of tomato fruits characterized by a purple coloration, not present in the more common red fruited varieties. This peculiar pigmentation is due to the presence of anthocyanins. These are plant secondary metabolites responsible for red, purple and blue colorations of flowers, fruits and leaves in many species. They are usually assumed with the diet, being rich sources mostly represented by red and purple fruits or dark vegetables (e.g., berries, cherries, plums, grapes, black beans, red onions, eggplant, red cabbage, purple sweet potatoes). As other polyphenolic compounds, they can provide many health benefits, and, as a consequence, their consumption can be helpful in reducing the incidence of cardiovascular, metabolic and degenerative or chronic diseases and of certain types of cancer. Tomato fruits are naturally rich of carotenoids, vitamins and polyphenols, but do not contain anthocyanins, due to mutations in their specific biosynthetic pathway. However, in recent years, either through genetic engineering or introgression by breeding of specific gene variants using wild relatives, this biosynthetic block has been overcome. This allowed the production of the new tomatoes’ phenotypes characterized by purple pigmentation localized only on the fruit peel or in both peel and flesh. In purple tomatoes, the high concentrations of anthocyanins that can be achieved, and not to the detriment of other metabolites, represent a real added nutritional value of these fruits.

Purple Tomatoes: Their Origins and Specificities

Tomato (Solanum lycopersicum L.) is the second most cultivated vegetable worldwide and one of the most consumed, both fresh and processed [1]. Therefore, tomato fruits represent one of the main sources of carotenoids, polyphenols and vitamins of the human diet, even if the concentrations of bioactive compounds are not as high as those of other vegetables [2].

With domestication, several different tomato varieties have been developed all over the world, differing in fruit size, shape and colour [3]. The nutraceutical value of tomato fruits relies on their content of carotenoids, polyphenols, soluble sugars, organic acids, minerals and vitamins, particularly vitamin C and vitamin E [1][4][5], as well as of volatile compounds [6]. Their antioxidant capacity depends on both lipophilic (carotenoids and vitamin E) and hydrophilic (vitamin C and phenolic compounds) fractions [7]. Both composition and nutritional value are highly affected by genotype as well as nutrition and cultivation environment [8][9]. Pre- and post-harvest processing operations [10] can represent other important factors.

Carotenoids represent the main secondary metabolites in tomatoes, with the red lycopene as the most abundant one, followed by the colourless phytoene and phytofluene and the orange β-carotene (Table 1). Lycopene content increases during ripening, as the concentration of chlorophylls decrease, and it is higher in the pericarp [11][12]. Lycopene is a strong antioxidant compound, with a very important role in the prevention of several diseases [12][13].

Polyphenolic compounds include flavonols and their derivatives, hydroxycinnamic acids and flavanones [9][14] (Table 1). Naringenin chalcone (a flavonoid biosynthetic pathway intermediate) is the most abundant, followed by rutin, which is responsible for the yellow colour of the peel. Rutin is a glycosylated derivative of quercetin, which represents the main flavonol of tomatoes. The flavanone naringenin is present at lower concentrations, as well as other flavonols, such as kaempferol and myricetin. Hydroxycinnamic acids mainly include chlorogenic and caffeic acids, but also p-coumaric and ferulic acids, which are quite common in tomato. Remarkably, the flavonoid pathway is active only in the fruit peel [15][16], where flavonols and their derivatives can be accumulated [17]. Anthocyanins are not synthesized in tomato fruits, due to mutations in regulatory genes of their specific biosynthetic pathway [18]. On the contrary, they are produced in tomato vegetative tissues [19], provided that adequate developmental and environmental stimuli are present.

Due to the increasingly acknowledged health beneficial role of anthocyanins, several attempts to activate their biosynthetic pathway in tomato fruits have been successfully made in recent years, either with genetic engineering or traditional breeding approaches [20] (Figure 1).

After some preliminary attempts [18], the first “purple” engineered tomatoes were produced in 2008, when two transcription factor-encoding genes from snapdragon, Delila (Del) and Rosea1 (Ros1), were expressed in the cultivar MicroTom under a fruit-specific promoter [21]. The high anthocyanin concentrations reached in these fruits determined an intense purple coloration in both peel and flesh, enhancing in a significant way their hydrophilic antioxidant power. The activation of the biosynthetic pathway led to the synthesis of different compounds, with delphinidin-3–(trans-p-coumaroyl)-rutinoside-5-glucoside and petunidin-3-(trans-p-coumaroyl)-rutinoside-5-glucoside as major molecules [22] (Table 2). The same exogenous gene combination was expressed in other tomato varieties with similar results [21][23].

By using a multi-level genetic engineering approach [24], the content of anthocyanins was then almost doubled in transgenic Del/Ros1 tomato lines by concomitantly expressing the Arabidopsis thaliana MYB12 gene, able to activate the upstream reactions from primary metabolism to flavonoid biosynthesis (Table 2).

An alternative strategy to obtain anthocyanin-rich tomatoes has been the breeding approach, made possible by the existence of wild Solanum species bearing fruits that synthesize anthocyanins under suitable conditions [18][20]. Different genetic combinations were obtained by crossing S. lycopersicum with different interfertile wild species. The most stable anthocyanin-rich fruit genotypes were those homozygous for both Anthocyanin fruit (Aft) [25] and atroviolacea (atv) [26] alleles (Table 2) (Figure 1). Differently from the engineered tomatoes, the anthocyanin phenotype in these fruits is limited to fruit peel and is environmentally dependent, being particularly induced under high light and low temperatures [16][27]. As a consequence, the quantity of pigments inversely correlates with fruit size—the maximum amounts (up to 300 mg 100 g-1 FW) could be reached by small fruits, where the ratio peel/flesh was higher [27]. Carotenoid levels in these fruits were similar to those in non-anthocyanin ones, indicating that the increased flux of metabolites into the flavonoid pathway was not detrimental to the carotenoid synthesis. From the Aft/Aft x atv/atv starting breeding material [27], the “Indigo Rose” purple tomato lines were bred [28].

A second independently developed Aft/Aft x atv/atv genotype was named “Sun Black” (SB) for the light conditional purple fruits [16][20][29] (Figure 1). In SB, the content of anthocyanins could reach more than 1 mg g–1 DW and the two main molecules identified were petunidin-3-(trans-p-coumaroyl)-rutinoside-5-glucoside (56.6% of the total) (Figure 2) and malvidin-3-(trans-p-coumaroyl)-rutinoside-5-glucoside (21.4%) [30] (Table 2). In this line, other flavonoids increased, compared to the non-anthocyanin background, in proportion to the anthocyanin concentration, with rutin reaching 0.8 mg g–1 DW and a total phenolic content of 8.6 mg g–1 DW. Consequently, the antioxidant capacity of the hydrophilic extract was significantly high. Total carotenoid content, exceeding 200 µg g–1 DW, remained similar to non-anthocyanin varieties, whereas the amount of vitamin C (37.3 mg 100 g–1 FW) was found higher [30]. 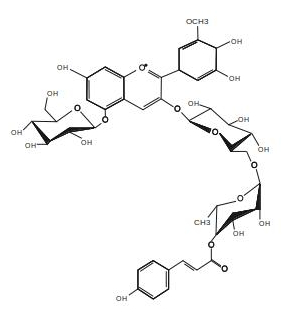 Figure 2. Structure of petunidin-3-(trans-p-coumaroyl)-rutinoside-5-glucoside, one of the most abundant anthocyanin molecules identified in purple tomato fruits. Redrawn from [30].

The line V118, whose genotype was not made known, was also developed using a breeding approach [31]. Similarly to the previous ones, carotenoid and polyphenol amounts and compositions in this accession did not differ significantly from other cultivated varieties, with the exception of the presence of anthocyanins, which mainly resulted in acylglycosides of petunidin and malvidin (Table 2). The phenolic compounds represented the major contributors to the antioxidant power measured in V118 purple tomatoes [31]. Successive studies carried out on this line [34] indicated the good bioavailability of the anthocyanin fraction in a cell-based antioxidant assay. Furthermore, in a simulated gastrointestinal digestion model, it was found that both the carotenoid and the phenolic profiles significantly changed during digestion, indicating the occurrence of a strong degradation process. This also affected the lipophilic and hydrophilic antioxidant activities of V118 fruits. The anthocyanin fraction, however, reduced in quantity but not in its composition, suggesting that a significant degradation did not occur during digestion.

A high-anthocyanin breeding line further described was a “blue” tomato, corresponding to a cultivar of “Indigo Rose” [28] cultivated in Japan [32]. In this cv., several types of anthocyanins were identified, including five delphinidin-, four petunidin- and four malvidin-derived, mostly accumulated in the peel (Table 2). The antioxidant activity of the blue tomato peel extract was highly dependent on the anthocyanin content and similar to that of strawberry fruits, and half if compared with that of blueberries [32].

In order to maximize the nutraceutical properties of tomato fruits, increasing both anthocyanins and carotenoids, breeding programs were also carried out by using “high pigment” (hp) mutants to be crossed with high-anthocyanin accessions [27][35]. Very interesting results were obtained in terms of anthocyanin accumulation as well as carotenoid and vitamin C contents, with the introgression in the same background of different mutations increasing the content of specific phytonutrients [36] (Figure 1). The combination of the alleles hp2, Aft and atv in a cherry tomato background, in particular, led to uniformly purple fruits with total enhanced nutrient contents [33] (Table 2). However, these allele introgressions also led to changes in volatile compounds, particularly enriched by phenolic profiles, which could modify the typical tomato flavour and are therefore worthy of further studies [33].

To summarize, independently from their genotypes, purple tomato lines obtained by breeding material maintained the original content of the tomato bioactive compounds and were characterized by the accumulation of anthocyanidins in the peel, which mainly belong to petunidin, malvidin and delphinidin classes, the same that can be found in tomato vegetative tissues [19]. One of the most common and abundant anthocyanin molecules identified in purple tomatoes was petunidin-3-(trans-p-coumaroyl)-rutinoside-5-glucoside (Figure 2). The antioxidant power of these fruits was higher than in non-anthocyanin varieties, because they summed a higher hydrophilic activity due to the polyphenolic fraction to the lipophilic antioxidant activity of the carotenoids. The concentration of anthocyanins varied according to fruit size and light exposition and could reach considerable values (more than 1 mg g-1 DW). The purple tomato lines produced by genetic engineering further maximized all these aspects, being characterized by a uniform phenotype with high anthocyanin concentrations in both peel and flesh. However, whereas some purple bred-tomato varieties have been already patented and marketed, none of the genetically engineered lines are commercially available yet.