Methane reforming is an important potential technology for solving both environmental and energy problems. This technology is important because methane is counted as a greenhouse gas, but on the other hand, it can be reformed into industrially valuable compounds.

Methane is an important energy source that is abundant and easily obtained in natural feedstocks, such as shale gas. On the other hand, methane is a greenhouse gas, and its conversion to other species has been a significant issue over the last century. As a methane molecule contains carbon and hydrogen, by adding oxidant molecules, it can be reformed to high-value compounds, such as hydrogen (H2), carbon monoxide (CO), or other hydrocarbons. The mixture of H2 and CO is called syngas and can be further converted to higher carbon-containing molecules, which are more valuable. Three major oxidants are commonly used to reform methane, i.e., water, oxygen, and carbon dioxide.

2. The Concept of Photocatalytic Methane Reforming

Following the bandgap excitation mechanism found by Fujishima et al. [1], many reports adapt this concept to methane reforming. Generally, in the field of photocatalysis, materials are composed of semiconductors with metal co-catalysts, as shown in Figure 1 [2][3]. Metal particles are deposited on the surface of a semiconductor to avoid recombination and produce active sites. When we focus on methane reforming, methane is oxidized by a hole generated at the semiconductor, while oxidants receive electrons from the metal catalyst. 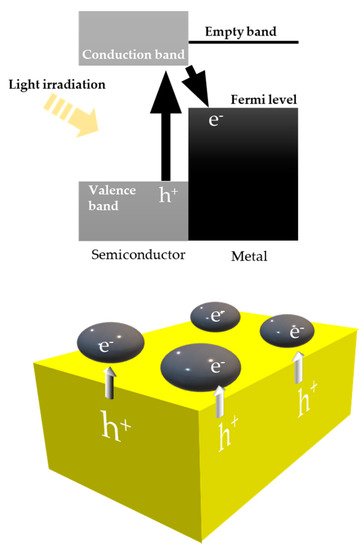 As for the semiconductor choice, it must meet the criteria of (1) stability against light, temperature, and the atmosphere of methane and other oxidants, and (2) the capability to reduce oxidants and oxidize methane reductants. To drive a photocatalytic reaction, the conduction band position must be higher than the redox potential of the oxidant and the valence band position must be lower than the redox potential of the reductant. As is already known, in aqueous solutions, carbon dioxide reduction requires a high conduction band position rather than proton reduction [4][5]. The same requirement should also be adapted for photocatalytic methane reforming. Further requirements should be considered, namely, (3) basicity and (4) reducibility, which are important factors that determine catalytic activity in thermal catalysts for methane reforming [6][7][8]. Furthermore, to make it practical, (5) visible light sensitivity, (6) an abundance of the photocatalyst materials, and (7) a facile catalyst fabrication process are required. Furthermore, the basicity of the semiconductor is an important factor that determines the catalytic activity under dark and light irradiation conditions. For example, MgO is one of the most widely used supports in methane reforming. Following this strategy, alkaline elements can be introduced into light absorbers, such as the reported examples of SrTiO3, NaTiO3, or K2Ti6O13.

With respect to the history of the catalyst development for methane reforming, it began with thermal catalysts and has seen great advances since. It is good news that light has promoted photocatalytic activity, resulting in different product selectivities or anti-coking effects. Thus, it seems that light-irradiation solved crucial problems that thermal energy alone holds.

As for materials, various photocatalysts have been applied to photocatalytic methane reforming. Many photocatalysts, such as TiO2, ZnO, CeO2, Ta2O5, WO3, SrTiO3, NaTaO3, K2Ti6O13, and g-C3N4, were used. From various results, it can be concluded that the appropriate conduction band position should be chosen by considering the redox potentials of the reductant molecules. In addition, like thermal catalysts, the basicity of the semiconductor is quite important in photocatalytic methane reforming.

The mechanism of photocatalytic methane reforming remains controversial. As it is known, the mechanism for methane reforming in dark conditions is so complicated that the detailed mechanism is still studied in thermal catalysis. In photocatalytic methane reforming, photon energy is additionally supplied, and its mechanism is very complicated. However, many papers reported that the excited carriers in semiconductors react with reactants; electron reduces H2O, O2, or CO2, and holes oxidize CH4. In addition, the mediators in these photocatalytic reactions have multiple possibilities. There are reports that the oxygen ion is the mediator, and in some reports, protons are the mediators. In addition, there is evidence that [CH2O]n is one possibility for a mediator. The type of mediator depends on the surface structure of the catalysts and the type of methane reforming reaction. Hot carrier generation should also be considered for development. If the photon energy that causes hot carrier generation is smaller than the bandgap, there will be two carrier excitation types under irradiation with larger photon energies. The surface kinetics are also important, as we mentioned in this review paper. It should also be considered that the surface temperature of the photocatalyst is higher than the temperature measured in the reactor. As the quantum efficiency is usually a few percent, the energy of the photon is mostly converted to heat energy. Thus, the heat contribution is not negligible in the gas-phase reaction. In addition, the physical properties of the semiconductor will change as the temperature increases.

We propose two prospects for this field. One is the detailed study of the mechanism by manufacturing simple and understandable structures and conditions of catalysis. Previous studies were complex, and there were too many hypotheses. Understanding the reaction mechanism using either a simulation or experimental approach enables us to advance our research and development more strategically. For example, a spectroscopic method together with a well-defined surface, such as a single crystal, makes it possible to further discuss the reaction mechanism by observing the reaction intermediates. It can also be beneficial to fabricate a series of samples while holding one interpretable parameter; then, we can systematically compare their activity, stoichiometry, and/or stability. As there are so many parameters in photocatalytic methane reforming, an investigation of each parameter’s effect on the catalytic activity should be an important study for the future of this field. The second is to pursue higher activities; in particular, the visible-light activity is indispensable for utilizing solar energy effectively. By developing a photocatalyst that remains highly active and is composed of abundant and nontoxic elements, photocatalytic methane reforming may replace the current thermal system. As the shale gas revolution enables more methane to be produced, the technology for utilizing methane will become more important. From the standpoint of a hydrogen society, methane conversion is further important. On the other hand, as the Paris Agreement represents, global warming is one of the most serious problems humans face. Hence, methane must be activated without further CO2 emissions. Photons are one solution to solve the double-binding problem. To solve these difficult but important problems, we expect more researchers to join this field.