Subjects: Others
View times: 13
Submitted by:

Ballasted railway tracks constitute the major transportation grids in many countries across the globe; they convey commuters, as well as freight and bulk cargoes, between cities, mines, farmlands, and ports . The railtrack structure can be categorised into two groups: the substructure and the superstructure. The substructure comprises the subgrade, the sub-ballast, and the ballast, while the superstructure encompasses the sleepers (timber or concrete), the fastening mechanism, and the steel rails.

Ballast materials form a layer which encases the sleepers to provide both vertical and transversal stability to rail tracks. In the classical (conventional) design of railway tracks, the ballast is often considered as a flexible medium to simplify behavioural simulations during track analysis; as such, its continuous deterioration and accompanying plastic deformation are often disregarded. These issues result from the inadequate understanding of the complicacy of ballast particle rupture and other fouling mechanisms, as well as the lack of a properly definitive model. These have been consequential in the adoption of basic empirical methods in the planning and assemblage of railway track substructures, which often further require repetitive remedial operations and cost-intensive maintenance. The points at which the ballast particles interact with each other are the locations where load transfer occurs between adjacent particles. These tiny positions of contact continually and considerably deform with loading cycles while providing the requisite magnitude of resilience [1][2]. The high recurring loads concentrated on micro contact areas result in the wearing effect at contact points and, subsequently, fragmentation of the materials, with applied pressures exceeding the material’s bearing capacity [3]. The most commonly utilised materials for railway ballasts are described in Table 1.

A major reason for railway track maintenance is the accrual of contaminants in the voids between ballast aggregates. The deterioration of large ballast materials under loading further leads to the formation of fouling materials (particles ≤1.2 cm) [6]. Fouling influences the performance of tracks by altering the strength characteristics of substructure components via reduced durability, mud-hole formations, reduced permeability (drainage), reduced vertical, transverse, and longitudinal stability, and increased permanent deformation rates [7][8][9][10][11][12]. Railway maintenance frequency is linked to ballast quality, which constantly varies as a result of the intrusion and generation of fouling materials [6].

As reported in past studies, ballast fouling may occur as a result of one or the combination of five different mechanisms which include fragmentation of ballast (76%), migration of underlying sub-ballast materials (13%), surface infiltration of weathered particles and coal droplets (7%), upward migration of fines from subgrade formations (3%), and sleeper wearing (1%) [13][14]. Ballast fragmentation accounts for a significant fraction of commonly recorded contaminations, especially in the United States (US), and it has also been observed to be the most critical to track stability [15][16][17]. On the contrary, in the United Kingdom (UK), the main source of fouling observed is surface weathering [18]. As such, railway researchers have, over the decades, concluded that fouling significantly alters railway track deformational performance. [13]. However, Sussman et al. [1] argued that, except under high saturation levels, the high plasticity of clays causes it to stick and, as such, prevents the material from pumping into higher ballast layers. Rather, ballast materials often settle into the subgrade, thereby resulting in fouling [1]. Figure 1 illustrates the mechanisms of ballast fouling. 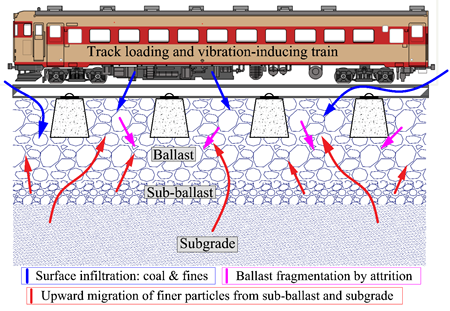 Ballast durability is, in many cases, influenced by edge abrasion and fragmentation under loading cycles. Makarov, Ermakov, and Ekimov [19] reported the degradation of ballast aggregates with the use of a combined Los Angeles Abrasion (LAA) test and 3D laser method. Wnek et al. [20] assessed ballast durability and contamination by performing LAA tests at 400 and 1000 revolutions. Qian et al. [21] further appraised ballast degradation by analysing the aggregate images before and after LAA tests. Okonta [22] correlated and established relationships between the shape characteristics and abrasion index of abraded ballast aggregates via LAA experimentation. Additionally, Sun et al. [23] found different vices for assessing ballast performance under recurrent train loadings and a wide range of speeds. It was noticed that degradation increased at higher speeds [23]. Nevertheless, Indraratna et al. [24] made a comparison of the performance of dissimilar ballast aggregate gradations under a cyclic drained triaxial test. Furthermore, Koohmishi and Palassi [25] evaluated the impacts of dissimilar gradation and subgrade situations on the degradation and durability of ballasts under impact loadings.

Tracks are often subjected to impact loads as a result of the inconsistencies in component geometry resulting from sudden changes in formation rigidity at transition points between ballasted and non-ballasted track structures, as well as rail/wheel-associated anomalies or corrugation of rails [26]. These continuous loadings are consequential in the rapid deterioration of ballast particles and development of mineral contaminants. In response to this issue, Kaewunruen and Remennikov [4] studied the projection of dynamic cracks from prestressed concrete tie beams to underlying ballast layers under impact loadings. Nimbalkar et al. [27] discussed the prospects of utilising shock mats in improving ballast durability performance. This was achieved by developing and performing extensive impact tests on ballast aggregates. Likewise, Aikawa [28] identified the role of ballast particles in the reduction of the criticality of induced impact loadings via in situ experimentations of the ballast layer’s dynamic reactions under moving traffic loads. Furthermore, Nimbalkar and Indraratna [29] conducted field investigations to assess the impacts of rubber shock mats and geosynthetics on the degradation and durability of ballast aggregates. It was observed that, at transition points, the insertion of shock mats between the concrete slab and the ballast layer results in a substantial decrease in the degradation of the ballast. Figure 9 shows ballast degradation by fragmentation and attrition after impact loading.

From the preceding summary of past ballast degradation studies, it is clear that the influence of ballast characterisation, loading situation, rock geological history, and operating climatic conditions (especially in tropical regions) on the durability and degradation of ballasts subjected to impact loading is yet to be well understood. As such, there is a need for further research focused on evaluating the durability of ballast materials in the tropical climates of Africa.

Figure 2. Comparison of ballast degradation patterns: (a) fragmentation; (b) abrasion [25].

Most studies on coarse aggregate and rock microscopy or microstructural assessment across the globe over the years focused on practicality in concrete [30][31][32]. As such, there is insufficient existing literature describing the microstructural properties and requirements of ballasts. Microstructural analysis incorporates quantitative and qualitative evaluations often with the use of energy-dispersive X-ray (EDX) and scanning electron microscopic (SEM) analyses, respectively [33]. Chen, Qi, Wang, and Cui [34] conducted experimental assessments on the microscopy and hydraulic characteristics of coarse aggregates utilised in high-speed railway substructures at varying degrees of compaction. In this study, a mercury intrusion porosimeter and a scanning electron microscope (SEM) were adopted. The outcomes revealed the presence of two variations of typical pores: micropores with diameters less than 12.1 µm and macropores greater than or equal to 12.1 µm. The micropores were further observed to considerably influence the hydraulic properties of the aggregates [34].