Clubroot is a major disease for the brassica crops, and it can not completely control by any other means except the resistant caultivars. MAS breeding helps us for the development of new resistant cultivars

The complexity of plant–pathogen interaction is a problematic in the case of CR breeding due to the appearance of multiple races of the pathogen [9]. Combinations of different CR genes exhibit higher resistance to the disease [10][11][12]. Though CR cultivars have been used widely for major production areas, field isolates of P. brassicae show variation, and different resistance sources from either B. rapa or B. oleracea vegetables were attained by P. brassicae. This suggests a serious risk that a resistance gene can be overcome by pathogen variants [13]. For example, seven CR canola cultivars were characterized for virulence in 106 P. brassicae population, and 61 of 106 P. brassicae population overcame the resistance in at least one of the seven CR cultivars [14]. There are many reports that CR genes show different reactions against the variable virulence of P. brassicae [15][16][17][18][19][10][20][21][22], but heterozygous CR loci are less resistant than the homozygous state [23]. B. rapa possesses several major CR loci, which may confer differential (pathotype-specific) resistance to particular isolates of P. brassicae, and sometimes this may have a large effect on resistance [9][15][24][25]. The NARO Institute of Vegetable and Tea Science (NIVTS) has developed a high CR Chinese cabbage cultivar, ‘Akimeki’, by the accumulation of Crr1, Crr2, and CRb genes. It was proven that the accumulation of CR genes through MAS strengthened resistance and, consequently, it can be resistant to the multiple races of P. brassicae in B. rapa. Three CR genes, CRa, CRk, and CRc, were accumulated in Chinese cabbage through MAS [9] and the homozygous lines for the CR genes exhibited exceedingly high resistance against all six field isolates of P. brassicae. The effect of accumulation of different CR genes could be controlled by the dose-dependent accumulation of CR proteins [26][27]. In B. oleracea, resistance in genotypes has generally been identified less frequently than in the genotypes of B. rapa and the level of resistance is low [28]. This might be due to the polygenic nature of resistance in B. oleracea [11]. B. oleracea progeny were developed by accumulating major and minor QTLs to evaluate its effectiveness to the clubroot disease [29]. Three QTLs in the F2/F3 population from the cross between cabbage and kale line K269 were identified [10]. The accumulation of those three CR genes showed broad resistance to three isolates. It was observed that only one major QTL PbBo(Anju)1 showed moderate resistance, whereas three minor QTLs without the major one showed distinct susceptibility [29]. Later, it was proven that PbBo(Anju)1 and three minor QTLs PbBo(Anju)2, PbBo(Anju)4, and PbBo(GC)1 play a critical role in the acquisition of resistance to clubroot disease [11][12]. Here, PbBo(Anju)1 plays a crucial role in the expression of clubroot resistance, and pyramiding minor CR genes are also essential for achieving higher resistance [11][12]. Their effectiveness was verified for controlling disease involving various isolates of P. brassicae [11]. Recently, two CR genes, CRb and PbBa8.1, were combined through MAS and CR homozygous lines in developed B. napus. The homozygous lines demonstrated a higher resistance than the heterozygous lines [30]. 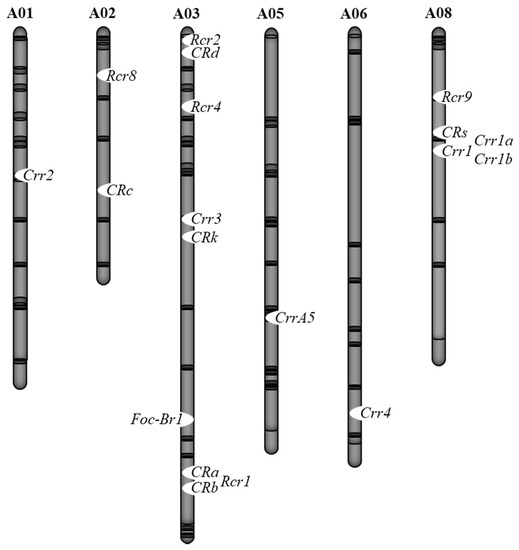 From the results from various researchers, it has been demonstrated that the DNA markers developed can select for the genes that are required for the acquisition of resistance, and these markers could be a powerful tool for resistance breeding in Brassica species. The novel breeding method developed can reinforce resistance by pyramiding R genes through MAS. For the genetic accumulation of R genes corresponding to wide pathogenicity, MAS is indispensable because it allows a precise identification of how many R genes are involved in a cultivar, and can monitor the accumulation of R genes in the progeny in the breeding program. To increase the durability of resistant cultivars to a broader spectrum of pathogen races, the combination of different R genes into a single line will be indispensable.