In order to determine the correlation between the inclination of articular eminence (AEI) and the development of temporomandibular disorders (TMDs), a systematic review was performed.

The temporomandibular joint (TMJ) is one of the most complex articular systems in human beings, which is formed by the glenoid fossa of the temporal bone (the superior component of the joint), and the mandibular condyle (the inferior component of the joint) and the two are separated by the articular disk [1][2]. The anatomy of the TMJ can provide capacity in both hinging movement and gliding movements of the mandibular within the three planes of space. The TMJ is critical to the craniomandibular system because it can achieve the mandibular functions with a dynamic balance mechanism [3]. Over the years, numerous studies have focused on the relation of the change of anatomical and physiological characteristics to stomatognathic dysfunctions [4], especially in cases of joint disorders [5].

Temporomandibular disorders (TMDs) are one of the most prevalent pathologies, which are defined as a comprehensive term of disorders affecting the TMJ, the muscles involved in mastication and/or the related structures [6]. Epidemiological studies of non-patient adult populations have shown that about 40–75% of patients have at least one sign of joint dysfunction, such as joint clicking, abnormal movement, and 33% of them have joint or facial pain [6]. Although the prevalence of TMDs in the population has attracted more attention from clinicians and researchers over the years, the etiology of TMDs is still poorly understood and remains to be elucidated [7][8].

Numerous factors that contribute to the development of TMDs have been proposed, such as traumatic injuries, occlusal disharmony, psychological factors, luxation of the joints, loss of posterior teeth, spine and postural alterations, and muscle hyperactivity [9][10][11][12]. Beside these factors, the features of the anatomic structure of the TMJ are also considered to be a local factor involved in the development of TMDs. During functional movements of the mandibular, the condylar process slides along the posterior slope of the articular eminence. A change of inclination of articular eminence might result in biomechanical variations of the TMJ because its characteristics determine the trajectory of functional movement [13]. Therefore, we speculate that articular eminence steepness and mandibular fossa morphology may have some connections with certain diseases that induce TMJ.

The relationship between the TMDs with the articular eminence inclination (AEI) has been investigated by previous studies. However, the associations between these two indicators have been found to be inconsistent and definitive conclusions cannot be drawn [14][15][16][17][18][19][20].

A review of literature can help us gain knowledge more effectively, however, it is necessary to carefully analyze the quality, to avoid erroneous conclusions from their results. The objective of this systematic review was to select and analyze the studies that verify the correlation between the inclination of articular eminence and specific TMD signs and symptoms, presenting real applicability to clinical practice.

According to the inclusion and exclusion criteria of this review, the search was conducted with the limitation of peer-reviewed English language papers, although this strategy may lead to the possibility that some publications in other languages and/or publications included in databases were unjustly excluded. However, it is a way to improve the methodological rigor and the conclusion drawn to a certain extent. Case reports and reviews are also excluded, as they do not have uniform standards that could increase the risk of bias.

From a methodological point of view, all the articles selected in this systematic review were retrospective observational studies with or without control groups verifying the correlation between AEI and TMDs. The scientific quality of evidence of the analyzed studies included in the present review was medium-low, mainly influenced by the exposure to the risk of bias and the lack of clinical methods with adequate consistency and sensitivity used for the diagnosis of TMDs. One of the methods created with the purpose of clinical and epidemiological research used for the diagnosis of evidence-based TMDs is the RDC/TMD, and the other method is the DC/TMD, which results in an evidence-based system with greater validity for clinical use. The RDC/TMD criteria and the DC/TMD criteria are emphasized as the international standard for examination of patients, which have existed since 1992 or 2014. Therefore, the qualities of all studies before that time are evaluated as weak. All of the selected articles in this systematic review, except for one (Panmekiate, 1991 [21]), were published after 1992. The types of method used for the diagnosis of TMDs of the selected articles were shown in the ”intervention” part of Table 3. However, only four studies, included in the review, diagnosed TMDs and classified samples according to RDC/TMD criteria , two studies diagnosed TMDs based on Helkimo index, and others diagnosed TMDs only by clinical sign and symptoms or then further confirmed by MRI or arthrography. That means the inclusion criteria of the papers are not consistent. The lack of introduction of uniform diagnostic criteria, such as RDC/TMD or DC/TMD defining the different categories of TMDs, decreases the level of consistency, resulting in a low quality of studies, and therefore comparisons between different studies could not be established. Without consistency, may imply that the observed correlations between two variables appeared because of chance or error [22]. Furthermore, TMDs are considered to be a heterogeneous group of different diseases involving the craniomandibular system, other than a single pathology [23]. It is difficult to control for all of the other variables when evaluating the relative importance of single risk factors for disorders with a multifactorial etiology [24][25]. Some studies that still seem to continue to use ”TMDs” as a collective term of all TMD signs and symptoms during the clinical examinations, pooled them in a unique dependent variable in the statistical analysis and the results. Nevertheless, the evaluation of the multifactorial complex pathologies, such as TMDs, should use multivariate statistical analyses, as univariate models may overestimate some resulting associations and possibly produce misleading conclusions [26][27]. This could be shown from the study of Rabelo KA et al., who found an important correlation among the type of disk displacement of the AEI (p < 0.001), but there was no statistical correlation between the presence and absence of disk displacement of AEI measurements (p > 0.05). Similarly, the AEI was steeper in the no condyle bone change group than in those of the bilateral condylar bone change (centre section p < 0.05, lateral section p < 0.01). However, these differences were only seen in the joints with osteophyte (all three sections p < 0.05) but not with erosion (all three sections p > 0.05), based on the study of Yamada K et al.

Many radiographic methods have been selected to measure the AEI in previous studies. In the early days, conventional radiographs, such as tomography or arthrography, were used for diagnosing the morphology of TMJ, but these modalities proved to have certain limitations and were replaced by helical CT, which evaluates osseous components in 3D without superimposition or distortion. The CBCT, which has high dimensional accuracy in measuring maxillofacial structures including TMJ, is considered to be one of the preferred ways to evaluate bone structure in the stomatological area. Nowadays, CBCT was selected rather than helical CT because of lower radiation dose, better spatial resolution, shorter scanning time, and more cost effective [28]. The MRI also allows a tridimensional analysis of the TMJ, and this technology can provide hard tissue and also soft tissue imaging, such as articular disk, related muscles, and ligaments. It has already been considered to be the gold standard imaging method for the diagnosis of internal derangement and the disk displacements with or without reduction. The radiographic methods are very important factors for angular and linear measurements as it influences the results. The articles included in this systematic review involve five imaging methods, from two-dimensional methods to three-dimensional methods. Using 3D imaging, the steepness of the eminence may be influenced by the location of the image (more laterally, centrally, more medially), whereas the 2D images show a summarization of the whole articular eminence as a three-dimensional structure. It is hard for us to establish comparisons of the values of AEI between different studies with different imaging methods because the consistencies of them still need more studies to support. 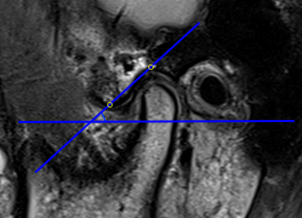 The horizontal reference plane is the other important factor affecting the AEI, which determines the degree of the angle directly. At the stage of the literature selection, the reference planes used were not limited, which can be FH plane, palatal plane, occlusion plane, and other defined reference planes. Except for three studies (one study used the true horizontal line, one study used the line tangent to the anterior and posterior articular eminences, one study used the line tangent to the curve of articular eminence and the point of squamotympanic fissure), and the remaining 13 studies included in this review all used the FH plane as horizontal reference planes. It has been generally recognized as an important reference plane and has proved to be of great value in cephalometric analysis and the three dimensions measurement since the Frankfurt agreement concluded in Germany in 1884, which is defined by a line drawn from the lowest point on the inferior orbital margin (Or) to the most superior point of the outline of the external auditory meatus (Po) [31][32]. A stable and comparable horizontal reference plane is very essential, and the FH plane seems to be a relatively ideal reference plane for evaluating AEI because the landmarks of the FH plane are independent of TMJ structure, which are not affected by the changes of mandibular fossa and articular eminence. However, although FH is well defined, the external auditory meatus changes its shape looking on a more lateral, central, or medial slice of MRI, CT, or CBCT, which may also influence the steepness of the articular eminence. Another important confounding factor in the analysis of the correlation between TMDs and AEI may be represented by the selection of the samples. Some of the studies were based on orthodontic patients, who may be alerted to the potential role of malocclusion as a risk factor of TMD. The control group or the asymptomatic volunteers of some studies was selected from the dental students, who can be aware of the risk factors of the TMDs and avoid them. In such cases, the samples selected may hardly represent the general population. The genders of the samples included also have such a problem. The groups of symptomatic patients in most studies included in this systematic review contain more female than male, which has a significant difference in gender distribution from the general population. However, TMDs affect approximately 40% to 75% of the general adult population, 80% of which seeking for TMD are females. Milano et al. reported that disk displacements of TMJ appeared considerably more often in females than in males because of altered collagen metabolism associated with joint laxity of genetic origin [33]. Peroz et al. also found that females present a greater correlation with disk displacements than males [34]. According to Warren and Fried, estrogen may influence the development and metabolism of the TMJ and associated structures (include bone, cartilage, and articular disk), and it may also influence the pain regulation mechanism [35]. The evidence in the previous articles suggested that the pathogenesis of TMDs may have a possible link with estrogen and that TMDs is more prevalent in the female. Therefore, we also included four articles containing only female subjects.

This systematic review retrieves and analyzes the medical literature about the relationships between the TMDs and the AEI published in seven databases over the past 74 years, 50% of the studies showed a positive correlation between the TMDs and AEI, but the evidence is not in high quality. In relation to the findings in this review, the following suggestions can be drawn: