Argiudolls are a Great group of Mollisols, which are key components in the provision of ecosystem services associated with global food production. These soils act as support for different anthropic activities and are involved in the regulation of water quality and quantity, nutrient recycling, carbon reserve and maintenance of biodiversity.

1. Argiudolls of the Pampean Region

They are found in semi-arid, sub-humid and humid areas, occupying 7% of the ice-free surface, usually under grassland vegetation. They are located at mid-latitudes, mainly in the Great Plains of the United States, in Mongolia and the Russian steppes, in Europe in South Australia, in southern Africa, in Brazil, and in the Pampean region of Argentina. In general, they are dark soils, rich in organic matter and bases, which have developed from loess and its distinctive characteristic is that they have argillic horizon—Bt (illuvial feature).

In Argentina, the area under the loess covers approximately 800,000 km2, i.e., between 25% and 30% of the total area of the country [1][2], where udic water and thermal temperature regimes prevail. In the Pampean region, as a result of wind transport, the texture of these soils varies, with sandy loess in the west and clayey loess in the east [3]. The climate of the Pampean region is temperate–humid, with precipitations concentrated in spring and summer [4] and showing variations from east to west (1000 to 600 mm). The temperature increases from south to north, ranging from 15 to 17.5 °C [5]. In this region, about 65% of the Mollisols correspond to the Great group Argiudoll [6], these being the most representative and productive soils (Figure 1). 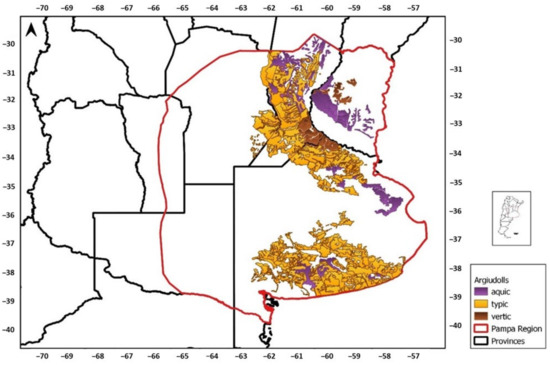 Figure 1. This is a Map of location of Argiudolls in the Pampean region.

Bonfils [7] indicated that the pedogenetic processes that define the large soil groups of the Pampean region are defined according to the alteration conditions, the state of the adsorbent complex, and the nature of the migrations of fine particles.

Different portions of the landscape of the Pampean region are occupied by different subgroups of Argiudolls, among which the most representative are Aquic, Typic, and Vertic Argiudolls [8]. Aquic Argiudolls are located in the upper parts of the landscape and are characterized by having deep profiles, sometimes with a somewhat thickened epipedon, followed by an argillic B horizon, with a thickness of 30 to 50 cm, which limits the percolation of water in the profile and predisposes to water erosion. Typic Argiudolls are the most widespread and productive soils in the region, being found in the provinces of Buenos Aires, Santa Fe, Entre Ríos and Córdoba. Their surface horizon commonly presents 3% of organic matter. In depth, their argillic horizon can contain between 30% and 50% of clay, with less amount in the west–southwest of the region and greater amount in the east–northeast. The profile of these soils can reach 120 cm deep, and may have calcium carbonate nodules in the BC and C horizons [8]. Finally, Vertic Argiudolls are located mostly in Entre Ríos province and have some characteristics of Vertisols (presence of cracks, cuneiform aggregates and slickensides in the argillic horizon), because they present a higher proportion of expandable clays [6].

Argiudolls are naturally fertile. Their agricultural and livestock aptitude is based on the properties of the soil surface layer, with a high content of soil organic carbon (SOC) and soil bases, neutral or close to neutral pH and soil structure favorable for root development. This horizon can have a proportion of fine silt of 50 to 67%, giving it very low expansion capacity and contraction and with resilience problems once it has lost its natural condition [9]. Under normal conditions, the surface horizon has a depth of approximately 8 to 25 cm, depending on the degree of erosion achieved. In addition, the in-depth presence of the argillic horizon provides physical characteristics that make it difficult for the roots to explore and absorb water and nutrients, thus being less favorable for crop growth than other Mollisols.

In short, the high content of silt in the surface horizon of Argiudolls, the presence of the argillic horizon and the length of the slopes (which can reach 1000 m) determine that one of the main limitations of these soils for agricultural production is the susceptibility to water erosion. In this sense, the soils in Argentina affected by both water and wind erosion occupy approximately 105 million ha, with water erosion being the main cause of land degradation in the last 25 years. Considering only the provinces of Buenos Aires, Santa Fe and Entre Ríos, about 14,000,000 ha are affected by slight and moderate erosion, whereas around 500,000 ha are affected by severe erosion [10]. For example, in the province of Entre Ríos, 57% of its area is susceptible to some degree of water erosion. This means that 4,500,000 ha can be eroded [11].

In the middle sector of a 70,000 ha basin located in the north of Buenos Aires province, Buján et al. [12] determined, using the 137Cs technique, that 50% of the Vertic Argiudolls conventionally agricultural way of use had moderate to severe erosion, a percentage that 20 years later increased to 68%, despite the implementation of direct sowing [13]. On the other hand, based on the modeling of runoff and sediment loss in a 10,040-ha basin in the town Santa María, in Entre Ríos province, a mandatory area of soil conservation where Aquic and Vertic Argiudolls predominate, Ramírez et al. [14] estimated that, despite having incorporated terraces to remove excess surface water in more than 30% of the area, the soils of the entire sub-basins had moderate to severe erosion [15]. Some examples of soil erosion in soils with argillic in other regions of the world have been reported [16][17][18][19].

2. Land Use Change in Recent Decades and Its Impact on Argiudolls

The expansion of agriculture in the Pampean region has occurred in three stages: one that lasted from 1960 to 1986, corresponding to a traditional extensive model characterized by a low-intensity production of resource use; another from 1986 to 2001, which was a transition period; and another one from 2001 until the present, which has been a period of intensive agricultural technology [20]. As a result of this transformation, between 1960 and 2005, the area for annual crops in the Argiudolls of the Pampean region increased from 37 to 70%. Casas [10] indicated that this increase was partly due to the incorporation of more fragile land into agricultural production, and to the fact that this land is more susceptible to water erosion and hydromorphic problems given its proximity to permanent watercourses. This, in turn, led to increased sediment production and water loss, thus deteriorating the water quality of streams [14][21][22].

Until the mid-1990s, the farming system prevailing in the Pampean region was conventional tillage, a system that led to the degradation of agricultural soils, losses in their thickness due to erosion, and a reduction in the carbon and nutrient stocks. This loss of organic material and physical deterioration of soils due to their use was alerted by numerous authors, including Michelena et al. [23], Senigagliesi and Ferrari [24], De Battista et al. [25], Chagas et al. [26] and Diaz-Zorita et al. [27], who further demonstrated that less soil removal favored the physical condition of Argiudolls. In addition, regardless of the prevailing tillage system, in a purely agricultural approach, as the years with agriculture increase, the organic carbon inputs into the soil are lower than the carbon dioxide emissions [28], especially after long fallow periods with low annual supply of harvest residue [29]. This behavior results in a progressive deterioration of the physical and chemical fertility of the soil [30][31], which is a situation that can only be counteracted by the incorporation of pastures [32].

The increase in grain production in the region has been due to the increase in yield per unit area, favored by the increasing use of pesticides and fertilizers, a fact that has intensified the capital invested in production. On the other hand, global increases in the demand for grains (mainly soybean) and their derivatives, as well as in their price, have promoted the increase in the area sown with this oilseed [33]. As a result, the Pampean agricultural systems have been simplified, specializing in the production of grain crops, currently dominated by oilseeds to the detriment of cereals. Thus, producers have unbalanced the crop rotation, decreasing the area with winter species (mainly wheat) and displacing pastures to marginal areas.

As a technical response to the problem of degradation of labored and eroded soils, the no-tillage (NT) farming system was promoted in the Pampean region. However, this responded mainly to economic reasons, due to the reduction in the use of fossil fuels and the operational simplicity of this farming system. From 1993 until the mid-2000s, NT expanded exponentially due to the incorporation of genetically modified soybean varieties and the reduction in the price of glyphosate at the expiration of its patent date.

Preventing and reversing soil degradation processes is a challenge that must be addressed with a holistic approach, based on land-use planning, especially in a context of global climate change [34]. This approach, designed to be developed on a scale larger than a field scale, requires analyzing the landscape as a whole. To address this problem, in 2015, the UN General Assembly adopted the 2030 Agenda for Sustainable Development. One of the goals of this Agenda is to promote the sustainable use of terrestrial ecosystems and the fight against desertification, urging to stop and reverse land degradation, to stop the loss of biodiversity, and to seek to achieve a world with neutral soil degradation by 2030.

Soil use and management practices should maintain the integrity of the agroecosystem and guarantee a continuous provision of services. The key to sustain the integrity of Argiudolls and to continue to generate local, national, and global benefits is an adequate use of the lands.

Many efforts have been made to develop legal instruments to contribute to the soil conservation in the region. At the national level, Law No. 24,428 has not been repealed, but it is no longer financed [35]. Regarding this, Acuña [36] held that this National Law and other provincial laws in force under the National Constitution reformed in 1994 and the General Law No. 25,675 on the Environment lack tax, economic and financial incentives, budget allocations, and an appropriate degree of articulation of public–public operational–technological actions at the di erent levels of state aimed at their implementation.
In the Buenos Aires province, it is important to highlight the existence of a Rural Code, which regulates the conservation of the agricultural land of this province, declaring the maintenance and improvement of its productive capacity as an issue of public interest. In Law No. 11,723/95 on the Protection, Conservation, Improvement and Restoration of Natural Resources and the Environment in
General, there is a Chapter dedicated to soils, which establishes the principles that will govern the treatment and implementation of policies aimed at their protection and improvement. On the other hand, in Santa Fe, the province has had the Soil Conservation Law No. 10,552 since 1992. In addition, by Resolution 1069/17, the Ministry of Production established the Soil Observatory of Santa Fe,
which consists of a panel of experts made up of representatives of di erent institutions, whose role is to advise on policies related to soil conservation [37].
In Entre Ríos province, based on the acknowledgement of the problem of water erosion, in 1989, the government passed the Provincial Law on Soil Conservation and Management No. 8,318/89. This law of public interest aims to promote the conservational use and management of the soils of the province, which, due to their natural conditions and anthropic actions, show symptoms or susceptibility to degradation. This law also aims to promote the access to economic stimuli for all producers holding property title in the areas of conservation and management, and, in accordance with the conservation practices that are implemented, establishes a diferential reduction in the value of the real estate tax in 4 to 10 years depending on the type of practice. In addition, in 2015, driven by the generation of information from the GEF PNUD ARG/10/G49-PNUMA 4B85 Project “Incentives for the conservation of ecosystem services of global importance”, the incorporation of Article 12 bis to Law No. 8,318, which considers a series of actions for the conservation of ecosystem services in an integral way, achieved half a sanction in the Chamber of Deputies of Entre Ríos province.