Cyclodextrins (CDs) are a family of cyclic oligosaccharides artificially obtained from the union of glucose monomers linked by α-1,4 glycosidic bonds. They are shaped as truncated cones due to the constitutional asymmetry of the glucopyranose rings. Their central cavity of the cone is lined with the skeletal carbons and ethereal oxygen of the glucose residues, which produce a hydrophobic zone that is capable of forming inclusion complexes with a variety of molecules. For this reason, a number of CDs have become everyday commodities in separation sciences, and so chemical aspects such as their structures or their intercalation mode have been more profoundly studied. The structural aspects of CDs can enable the improvement of different chromatographic separations, the enhancement of sensitivity, and the accuracy of analytical methods.

Inclusion complexes, or host-guest complexes, are non-covalent reversible structures of two or more molecules with superior physicochemical properties than those exhibited by the molecules individually [1]. Although historically developed in solution, there exists increasing interest in implementing these principles to systems assembling solid surfaces. In this sense, host-guest interactions are already being exploited for the reversible adsorption of analytes, which can provide an improvement in some features of analytical methods.

Cyclodextrins are non-toxic oligosaccharides whose natural occurrence can be classified into α-, β-, and γ-cyclodextrins, which are composed of 6, 7, and 8 glucose units, respectively. Thus, their diameters increase with the number of glucose units. The hydroxyl groups are oriented to the outer space flanking the upper and lower rims, with the primary hydroxyl groups towards the narrow edge of the cone and the secondary hydroxyl groups towards the wider edge [2]. Oppositely, the central cavity of the cone is lined with the skeletal carbons and ethereal oxygen of the glucose residues, which produce a hydrophobic zone that is capable of forming inclusion complexes with a variety of molecules [3].

They are well known for their host–guest chemistry, low prices, and negligible environmental impact. Therefore, they have been widely used as chiral selectors and delivery systems in the pharmaceutical and food industry over time. Their ability to trap guest molecules inside them through the formation of host-guest complexes together with the possibility of adapting the type and size of the analyte to be encapsulated taking into account the cyclodextrin used [4], as well as to the medium in which analytes are contained, has positioned CDs as promising nanoscale carriers. They are capable of improving stability while decreasing the reactivity of the guest compound. 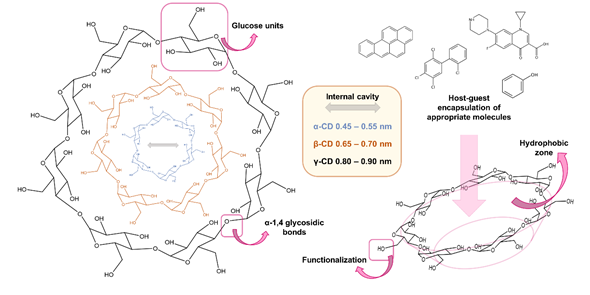 Figure 1. Schematic representation of the native α-, β-, and γ-cyclodextrins. Their structure, shape, and other functions they present are also mentioned.

It is well known that CDs have certain limitations for their use as individual sorbents or simply as a part of the mentioned hybrid materials. Their solubility in water makes their losses during the pollutant-caption procedure in aqueous samples significant, which is reflected in a decrease in the repeatability of analytical methods and the loading capacity of the solid phases [5]. For example, native CDs were used as sorbents to perform solid-phase extraction (SPE) of pesticides from water samples, tomato juice, and orange juice [6]. Additionally, cyclodextrin-hybrid materials were tested to extract PAHs from water and VOCs from air samples [7][8][9]. These studies showed their usages, but also their limitations. In this sense, the key to make CDs suitable for extraction purposes is to increase their insolubility by chemically connecting them to water-insoluble supports.

CDs can be modified by means of their hydroxyl groups in the external hydrophilic zone. In fact, different derivatives have been synthesized by amination, esterification, or etherification [10] to suit the application. This possibility has produced the study of new synthetic methods for producing cyclodextrin-based materials, since using the well-known host–guest chemistry of natural CDs is a logical stepping-stone to form more complex materials. A variety of research on materials synthesized from CDs that allow the extraction of different compounds from urine, water, soil, or food sample has been described. They have been extensively used as adsorbents in analytical chemistry, not only in the form of cross-linked cyclodextrins [11], but also for the functionalization of other supports [12].

Nowadays, a variety of materials, nanomaterials, and nanoparticles with cyclodextrin units on their structures has shown great potential in different fields such as in analytical chemistry or for remediation purposes. The use of cyclodextrins for the preparation of composite materials for food, environmental, and bioanalytical applications is extensive.

Cyclodextrins can provide a wide range of advantages in separation techniques due to their ability to form host-guest complexes with appropriate compounds. They are oligosaccharides, so obtaining native CDs is easy and environmentally friendly. Additionally, their capacity to be functionalized through their external hydroxyl groups makes their applications expand every time, mainly intending to bind them to solid supports that significantly reduce or eliminate their high solubility in water, which is an important drawback reported, expanding at the time their applications.