The brewing industry is characterized by the large production of by-products. Following the fundamentals of a circular economy, several attempts to recycle brewers’ spent grain (BSG) have been investigated. However, little information is available on its use for composting.

The concept of a circular economy was developed to overcome the traditional linear economic model of “take, make, and dispose” [1]. This new business model focuses on sharing, re-use, repair, and recycling, as a closed loop. In a circular economy, two types of materials have been identified: biological and technical. The biological material can be decomposed by microorganisms, while the technical material cannot be reintegrated into the biosphere.

Typically, a large amount of biological material is produced by agro-industry activities. Therefore, recycling agro-industry by-products represents an important challenge for a circular economy. In this context, and as underlined by many studies [2][3][4], the waste by-product produced by the food and drink industries should be considered as one of the most serious environmental problems. In the drinks industries, for example, a brewery produces large quantities of by-products that include spent hops, yeast, and spent grain. The last of these is the most significant by-product in the brewing process, of which it represents 85% [5].

Xiros and Christakopoulos (2012) [11] summarized the brewing process into the six key stages of malting, milling, mashing, brewing, cooling, and fermentation. As shown in Figure 1, after the mashing process, a filtration step (lautering) follows, from which a sweet liquid (the wort) is obtained. This liquid is rich in fermentable sugars that can be converted into ethanol during fermentation, while the insoluble, undegraded part of the malted barley grain is known as BSG [12]. 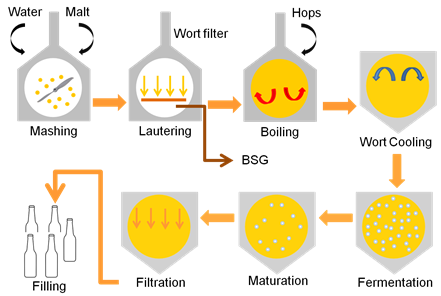 The disposal of BSG, spent hops, and yeast represents one of the major concerns for the brewing industry because of: (1) the huge bulk quantities generated; (2) the low market value; (3) the difficulty for their storage due to high moisture contents; and (4) the issues with their disposal as landfill or by burning due to environmental pollution [11].

In the last few years, following the fundamentals towards a circular economy, several ways to recycle BSG have been investigated. For example, Aliyu and Bala (2011) [13] reported that BSG has been investigated for animal feed, production of value-added compounds (e.g., xylitol, lactic acid, among others), microorganism cultivation, or simply as a raw material for extraction of compounds such as sugars, proteins, acids, and antioxidants. Mussatto and Roberto (2006) [14] highlighted that BSG can also be used efficiently for enzyme production, as an adsorbent for removing organic materials from effluents, and for immobilization of various substances.

Composting allows biological decomposition of organic matter and can be promoted by microorganisms under controlled conditions. In addition, as highlighted by Pampuro et al. (2016) [15], composting implies volume and weight reductions of the organic waste. This process is aerobic and exothermic, which leads to a stabilized final product (i.e., humus-like), known as compost, which is free of phytotoxicity and pathogens (i.e., viruses, bacteria, fungi, parasites), and is rich in nutrients. Hence, BSG has agricultural value as a fertilizer [16][17].

As shown in Figure 2, microorganisms are involved in this composting (i.e., bacteria, fungi, microarthropods), and they can easily metabolize and mineralize the simple organic carbon compounds, to produce SO42−, NH3, greenhouse gases, heat, and water vapor. In recent years, composting has gained interest as a waste management strategy that has potential economic and environmental benefits, as this process adapts to any by-product that results from agro-industry activities. Compost use for agricultural purpose can help to maintain and improve soil quality and fertility, while reducing erosion and allowing bioremediation of polluted soils [18][19].

Composting is a spontaneous process that occurs naturally. However, efficient composting to obtain a high value-added agricultural product in terms of agronomic properties, and to avoid nuisance problems such as odors and dust, requires the control of several factors. The composting process is typically affected by two main groups of factors: (i) those related to the composition of the initial composting mixture, such as its nutrient balance, pH, and porosity; and (ii) those related to the process management, such as O2 concentrations and temperatures [20][21].

The nutritional balance of composting mixtures is strongly affected by the C/N ratio. Microorganisms involved in the composting process require both carbon and nitrogen as organic sources for their activities and development. Following the recommendations of De Bertoldi et al. (1983) [22] to optimize the development of the composting process, the C/N ratio should be from 20 to 30. Composting mixtures characterized by an excess of degradable substrate for the microorganisms typically have a C/N ratio >30, which makes the process very slow. On the other hand, as highlighted by Bernal et al. (2009) [21], composting mixtures characterized by a C/N ratio <20 can result in nitrogen losses, as ammonia volatilization or as leachate from the composting mass. However, low C/N ratios can be corrected by adding a bulking agent (e.g., straw, wood chips, sawdust) to provide degradable organic carbon.

According to Bernal et al. (2009) [21], the optimum pH when composting is from 5.5 to 7.5. This factor has a key role in the control of nitrogen losses through ammonia volatilization. In this context, Azim et al. (2018) [23] highlighted that ammonia losses can be particularly significant at pH >8.

In terms of porosity, air-filled pore spaces of composting piles should be in the range of 35% to 50%. Porosity >50% prevents the temperature increase inside a composting pile, because energy loss exceeds heat production. Porosity <50% can instead lead to anaerobic conditions and odor generation [21].

For aeration, the optimum O2 concentration is from 15% to 20% [24]. This parameter presents a significant influence on composting development. Correct aeration controls the temperature, removes the excess moisture, and provides the O2 required by the biological processes.

The optimum moisture content of compost is from 60% to 65%. Moisture >65% represents an obstacle to the supply of oxygen, and anerobic conditions can be generated. On the other hand, microbial activity is significantly reduced with moisture <40% [25].

The temperature pattern for compost follows the microbial activity and the composting process. The optimum temperature range for composting is 40 °C to 65 °C. Temperatures >55 °C can kill pathogenic microorganisms such as Aspergillus fumigatus, the populations of which drop significantly at >50 °C. Other pathogenic microorganisms, such as Salmonella spp. and the nonpathogenic Escherichia coli, have been reported to persist during composting of several types of waste [26]. Thus, it has been suggested that 70 °C for 30 min or 65 °C for several hours are required to obtain a well-hygienized end-product. However, if the temperature achieved exceeds the tolerance range of the thermophilic decomposers, the effect is damaging for composting . For this reason, temperature control is required to optimize the composting process. Several strategies have been identified for excess heat removal: control of the size and shape of the composting mass [27]; improved cooling and favorable temperature redistribution by turning operations, which means heat removal through evaporation cooling [28]; and superior temperature control by active removal of heat through temperature feedback-controlled ventilation (Rutgers strategy).

Considering the development of the temperature profile, composting can be divided into three main phases:

The second, stabilization, phase includes not only the mineralization of more slowly degradable compounds, but also more complex processes, such as humification of ligno-cellulose compounds [30]. In this phase, the quality and maturity of the compost is determined through various chemical parameters, such as pH, ammonia content, and C/N ratio, as well as microbiological and biological aspects, such as plant growth and seed germination.

2.2. Methods for Identification of Microbial Communities in Composting

The study of microbial communities in the raw materials and throughout the composting process is fundamental to monitor and manage the quality of soil improvers that are obtained from the stabilization processes. The methods to determine the diversity of the microbial communities are of two types: (i) those based on the cultivation of microorganisms in specific media, for evaluation of the richness and abundance of the cultivable microbial species; and (ii) culture-independent methods for the study of the microbial communities as a whole, without the need to isolate and identify single species. The latter methods are based on various molecular biology techniques, among which denaturing gradient gel electrophoresis has been widely used for characterization of the structure of bacterial communities, in both soil and water samples [31].

2.3. Dynamics of Microbial Species during Composting

Each raw material contains its own particular microbiota and provides a unique environment for that community [32]. The biological and physicochemical parameters of each material influence the composition and dynamics of the species progression during the composting process. Indeed, pH and total nitrogen of the composting material positively influence the microbial communities, and conversely, total organic carbon content and seed germination indices are negatively correlated [33]. The bacterial community structure within different composting materials are all significantly influenced by the C/N ratio and moisture, with an optimal range for the C/N ratio of 20 to 30. Thus, microbial communities can be effectively regulated by adjusting the relevant environmental parameters [34]. Through cultivable approaches, air-dried BSG has been shown to be contaminated by bacteria (103 CFU/mg), but not by fungi and yeast. However, the presence of thermal resistant mycotoxins, such as ochratoxin A, fumonisins, T-2, and HT-2, suggests that microbiological analysis should be performed for raw and stored BSG to determine the microbial species structure, to assess BSG safety and suitability for composting.

Wang et al.  compared the bacterial structure of seven different composts using denaturing gradient gel electrophoresis (DGGE), and they showed that four species were present in all of the compost types, two species in several composts, and four species were specific of a single compost. He et al. (2013)  showed that Arcobacter spp. and Marinospirillum spp. were dominant prior to composting, whereas Thermotogae spp. became more strongly represented as the composting process proceeded. Bacillus spp. and Cohnella spp. were identified at various composting phases, while Cellulomonas spp. and Cytophaga spp. were present during the aerobic mesophilic phase of cellulose degradation. More than half of the Bacillus spp. examined produced extracellular cellulases, which included in particular, mesophilic aerobic and anaerobic forms of B. subtilis, B. polymyxa, B. licheniformis, B. pumilus, B. brevis, B. firmus, B. circulans, B. megaterium and B. cereus; these are known to be cellulose and hemicellulose degraders [35].

Actinomycetes show primary biodegradative activity, as they can secrete a wide range of extracellular enzymes and can metabolize recalcitrant compounds. Thus, composting relies heavily on such prolific actinomycetes activities. As well as the mesophilic Cellulomonas spp., thermophilic cellulose degrading Thermoactinomyces spp., Streptomyces spp., and Thermomonospora spp. have been isolated from dry vermicompost at high salt and alkaline pH. Finally, fungal species are also known to have important roles in composting of lignocellulosic materials, such as Trichoderma harzianum, Pleurotus ostreatus, Polyporus ostriformis, and Phanerochaete chrysosporium.

3. Characteristic of Brewers’ Spent Grain Related to the Composting Process

Many factors contribute to the high variability of BSG, including region of production [66], barley variety, harvest time, hop characteristics [36], malting and mashing con- ditions, and quality and type of adjuncts added during the brewing process [37][38]. Table 1 reports the main physicochemical characteristics described for BSG with respect to the major factors that affect the composting process.