Inflammation is a common feature of several diseases, including obesity, diabetes and neurodegenerative disorders. Circadian clock genes are expressed and oscillate in many cell types such as macrophages, neurons and pancreatic β cells. During inflammation, these endogenous clocks control the temporal gating of cytokine production, the antioxidant response, chemokine attraction and insulin secretion, among other processes. Deletion of clock genes in macrophages or brain-resident cells induces a higher production of inflammatory cytokines and chemokines, and this is often accompanied by an increased oxidative stress. In the context of obesity and diabetes, a high-fat diet disrupts the function of clock genes in macrophages and in pancreatic β cells, contributing to inflammation and systemic insulin resistance.

The activity of the immune system is coordinated by intrinsic molecular clocks in blood T and B lymphocytes, monocytes, macrophages and other inflammatory cells. Circadian rhythms within the immune system are synchronized by a ‘master’ clock located in the suprachiasmatic nuclei (SCN) of the hypothalamus with a timing of ~24 h. At a molecular level, the core clock system of the SCN produces rhythms of gene expression by means of self-sustained transcriptional/translational feedback loops [1]. The main loop is formed by BMAL1 and CLOCK transcription factors, which heterodimerize in the nucleus driving the transcription of Period (Per1,2) and Cryptochrome (Cry1,2) genes. PERs and CRYs accumulate in the cytoplasm, after which they enter the nucleus and inhibit BMAL1/CLOCK, producing rhythmic oscillations in gene expression. Further regulation is driven by the nuclear receptors REV-ERBs (α and β) and RORs (α, β, and γ) that repress and activate BMAL1, respectively. Importantly, the localization and stability of circadian clock proteins is regulated by some members of the family of casein kinases (CKI) and protein phosphatases (PP) [2]. In addition to the core clock system in the SCN, peripheral clocks have been found in the heart, skeletal muscle, liver, kidney, pancreas and immune cells [3][4][5][6][7][8][9]]. In immune cells, the activation of inflammatory signals is mediated by clock genes [10]. The levels of expression of clock genes in immune cells are affected in pathologies characterized by chronic and systemic inflammation such as neurodegeneration, obesity and diabetes. Recent studies have pointed out the importance of the circadian gene Rev-erbα (reverse erythroblastosis virus alpha) as a mediator between inflammation and circadian rhythmicity. Altogether, this highlights the importance of the molecular clocks in mediating inflammatory responses and their potential role as therapeutic targets for the treatment of neurodegenerative pathologies. This mini-review discusses the recent findings regarding the role of clock genes in neuroinflammation, obesity and diabetes and new strategies for the treatment of neurodegenerative diseases.

Circadian clock genes have been implicated in the regulation of several diseases where inflammation constitutes a hallmark. Neuroinflammation, for example, is a common feature of many neurodegenerative diseases such as diabetes, Alzheimer’s, Parkinson’s and Huntington’s disease. Circadian clocks and sleep can influence the key processes involved in neurodegeneration, and this has led to consideration of the circadian systems as potential targets to promote brain health [11]. To address the role of circadian clocks in neurodegeneration, Musiek et al. [12] generated NestinCre+:Bmal1flox/flox mice in which Bmal1 (brain and muscle ARNT-like 1, also known as Arntl) is deleted in most neurons, astrocytes and oligodendrocytes, with residual Bmal1 expression in microglia. Bmal1 knock-out animals showed an increased expression of proinflammatory cytokines in the cortex, which is consistent with a condition of chronic neuroinflammation. These animals also presented behavioral abnormalities and dysregulation in the oxidative stress response. Strikingly, deletion of Bmal1 in the cortex also caused an 83% decrease in the expression of Rev-erbα, another circadian clock component, which suggested a possible mechanism by which Bmal1 could regulate neuroinflammation. Indeed, the role of Rev-erbα in neuroinflammation was later confirmed in a Rev-erbα−/− mouse model. Griffin et al. [13] observed that Rev-erbα deletion in mice caused spontaneous microglial activation in the hippocampus and promoted a proinflammatory phenotype. This was revealed by an up-regulation of the NF-κB pathway, a critical regulator of innate immune system activation. Furthermore, a physical interaction between REV-ERBα and several NFκB–related genes was confirmed by chromatin immunoprecipitation (ChIP). Remarkably, the same study demonstrated that the REV-ERBα agonist SR9009 suppressed brain inflammation in vivo, suggesting that the activation of Rev-erbα could constitute a viable strategy for the treatment of neurodegenerative pathologies.

It has been proposed that the regulation of inflammation by the immune system may underlie the pathologies associated with circadian desynchrony. The relationship between the immune system and circadian rhythms has been evaluated in several transgenic mice models. Castanon-Cervantes et al. [14] imposed a severe challenge to the immune system of Per2Luc knock-in mice by means of high doses of E. coli endotoxin lipopolysaccharides (LPS), injected intraperitoneally. In this study, a group of animals was exposed to chronic circadian disruption with a weekly 6-h phase advance over 4 weeks. As a result, this group of animals exhibited a magnified response to LPS compared to mice that was not exposed to chronic circadian disruption. This was reflected by higher levels of pro-inflammatory (i.e., IL-1β, GM-CSF, IL-12, and IL-13) and lower levels of anti-inflammatory (i.e., IL-10) cytokines in the serum of the phase-shifted mice group. Furthermore, macrophages harvested from the phase-shifted mice group exhibited an enhanced response to LPS in vitro and a significant decrease in Bmal1 expression. Thus, it was proposed that the dysregulation of inflammatory responses by circadian disruption could be mediated, at least partially, by an alteration in the clock function of peritoneal macrophages. In order to test the role of the macrophages’ clock genes in the temporal gating of cytokine responses, Gibbs et al. [15] generated a macrophage-specific Bmal1−/− mice (LysMbmal−/−), which carried a luciferase reporter for the circadian clockwork (mPER2:Luc). Macrophage-specific Bmal1 knock-out mice exhibited a suppression of transcripts for the clock gene Rev-erbα, in agreement with the observations by Musiek et al. [12] in the brain. Then, with the aim of testing the role of Rev-erbα in the gating response of cytokines in vivo, they assessed the effect of the endotoxin LPS-induced IL-6 response in Rev-erbα−/− mice. As a result, the rhythmic immune responses were abolished in the serum and in macrophages from these animals (Figure 1). Furthermore, it was observed that REV-ERBα has control over several genes involved in innate immunity, including Il6, Il19, Cxcl6, Cxcl11, and Ccl2. Recently, Sato et al. [10] showed that REV-ERBα mediates the inflammatory infiltration of macrophages by repressing the expression of Ccl2. CCL2 is an important chemokine that binds the CCR2 receptors in monocytes/macrophages to stimulate their migration and initiate inflammation, CCL2 promotes cell adhesion and migration by activating the ERK- and p38-signaling pathways, which are also targeted by REV-ERBα. Moreover, the REV-ERBα agonist GSK4112 inhibited the expression of Ccl2 following LPS stimulation. Altogether, these studies demonstrate that REV-ERBα constitutes a key link between the cellular circadian timers and innate immune responses. 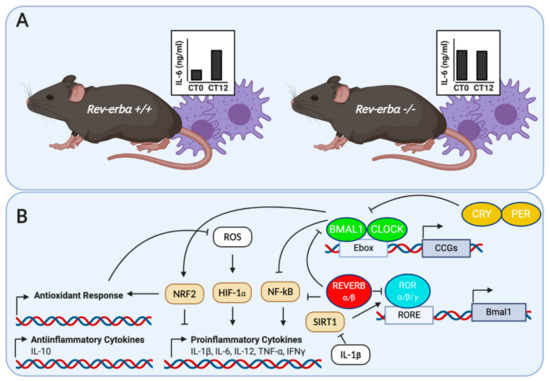 Figure 1. (A) Loss of temporal gating of IL-6 cytokine response in serum and macrophages from Rev-erb+/+ and Rev-erbα−/− in response to LPS. Adapted from Gibbs et al. [15]; (B) molecular regulation of cytokines and oxidant response in inflammatory cells by circadian clock proteins. BMAL1 and REV-ERBα control the inflammatory response by down-regulating NF-κB-mediated transcription in inflammatory cells. In addition, BMAL1 regulates the IL-1β response in macrophages via a NRF2-dependent suppression of ROS and HIF-1α. Finally, the pro-inflammatory cytokine IL-1β is able to disrupt β cell clocks by altering the expression of the NAD+ dependent deacetylase SIRT1.

Apart from REV-ERBα, the clock gene Bmal1 also controls the circadian response of the innate immune system. The role of Bmal1 was investigated in myeloid cells, by studying its role in controlling the rhythmic trafficking of Ly6Chi inflammatory monocytes. Ly6Chi monocytes provide the first line of defense against the gram-positive bacterium Listeria monocytogenes. In this sense, Nguyen et al. [16] showed that the specific deletion of Bmal1 in myeloid cells induced a higher serum concentration of inflammatory cytokines and chemokines, such as IL-6, IL-1β, IFNγ and CCL2. This was accompanied by a disruption in the circadian patterns of Ly6Chi monocytes and a higher susceptibility of mice to infection-induced systemic inflammation. In addition to its role in mediating the inflammatory response, Bmal1 also plays a crucial role in promoting the antioxidant response in myeloid cells [17]. Mice with Bmal1 excised in the myeloid lineage exhibit a decrease in the relative activity of the NRF2 transcription factor, leading to an accumulation of reactive oxygen species (ROS), activation of the HIF1A transcription factor and a higher production of the proinflammatory cytokine IL-1β. Thus, BMAL1 limits the production of the proinflammatory cytokine IL-1β by targeting the oxidative stress pathways in macrophages. In brain-resident cells, Bmal1 also plays a role in controlling the inflammatory responses. In microglia from Per1:Luc transgenic mice, Bmail1 knock-out selectively inhibited LPS-induced IL-6 expression [18]. Then, ChIP assays demonstrated that Bmal1 binds an E-box element in the promoter region of the Il6 gene. Finally, to assess the role of Bmal1 in vivo, these authors generated mice with Bmal1 deficiency in CD11b cells (Bmal1−/−CD11b). After exposure to middle artery cerebral occlusion to cause a severe inflammatory event in the brain, Bmal1−/−CD11b mice exhibited a less potent up-regulation of IL-6. Altogether, these results suggest that the clock gene Bmal1 modulates the inflammatory response by up-regulating IL-6 expression in the brain.

Apart from the role of clock genes in controlling the inflammatory response, pro-inflammatory agents can also affect circadian rhythmicity. Experimental data suggest that TNFα and IL-1β can inhibit the activation of E-box regulatory elements of clock genes by CLOCK/BMAL1 [19]. Furthermore, the effects of TNFα on clock gene expression occur specifically in the SCN, and lead to prolonged rest episodes during spontaneous activity of mice. This effect of TNFα on locomotor activity may provide a link between the immune system activation and fatigue associated with immune diseases. In addition to TNFα, other inflammatory agents can also affect the circadian clock function. Among them, IFNγ affects the circadian rhythms and gene expression in SCN neurons [20]. This effect is accompanied by a decrease in spontaneous excitatory postsynaptic and spiking activity of SCN neurons. Similarly, LPS produces a transient suppression of circadian clock genes and clock-controlled genes in the SCN of rats [21]. Although not assessed in this study, it has been suggested that there is an indirect action of LPS through inflammatory cytokines such as IL- 6, TNFα and IFNγ. Thus, a better understanding of the bidirectional relationship between clock genes and inflammatory signals could give us new insights of the pathogenesis of inflammatory diseases.