Endothelial Dysfunction is a condition of altered metabolism and function of endothelium inducing vascular injury and defective repair.

Functionally, ED can be defined as a reduced bioavailability of NO, which affects the impaired response to an endothelium-dependent vasodilator such as acetylcholine.

Endothelium-derived NO not only keeps blood flow, though it also acts as a negative modulator of platelet aggregation, pro-inflammatory gene expression, ICAM-1 (intercellular adhesion molecule 1) and VCAM-1 (vascular cell adhesion molecule 1) production, E-selectin expression, ET-1 synthesis, VSMC proliferation, and lipoprotein oxidation [1]. Thus, ED is characterized by a series of features which goes beyond the hemodynamic dysregulation, including excess production of reactive oxygen species (ROS), enhanced expression of adhesion molecules and inflammatory mediators [2], and increased permeability of vascular endothelium. All of these promote both beginning and progression of atherogenesis [3][4].

ED predictive role on the cardiovascular risk has been largely documented in clinical studies by non-invasive, semi-invasive and invasive techniques measuring ED in humans in situ [5][6]. Besides ED functional measures, circulating levels of adhesion molecules and proinflammatory cytokines have also been used as surrogate markers of endothelial activation and cardiovascular risk [7].

The literature extensively supports ED as an important risk factor for the development of T2DM cardiovascular complications [8].

Based on a state of insulin resistance (IR), the interaction of three pathological conditions frequently associated with diabetes (hypertension, dyslipidemia and hyperglycemia), plays a pivotal role in the pathogenesis of the atherosclerotic process [9]. In this scenario hyperglycemia, playing a key role in any complication of diabetes [10], is a leading actor.

Acute hyperglycemia, achieved by intra-arterial infusion of dextrose, has been documented to impair endothelium-dependent vasodilation in healthy humans [11]. Likewise, the acute increase in plasma glucose after administration of oral glucose tolerance test (OGTT) determines, within a 1–2 h time period, a reduction of flow-mediated vasodilation in non-diabetic subjects, with a higher response in individuals with impaired glucose tolerance (IGT), and even more in those with diabetes [12]. A similar harmful effect is likely expected from prolonged and repeated post-prandial hyperglycemias, as it may routinely happen in T2DM. These hyperglycemic spikes may exert a dramatic and long-lasting epigenetic “memory” effect on the endothelial function, as reported in ECs cultured in high glucose and then restored to normoglycemia [13], which suggests transient hyperglycemia as a potential HbA1c–independent risk factor for diabetic complications [14]. A recent study in small mesenteric arteries from healthy and diabetic db/db mice has demonstrated that both acute and chronic exposure to high glucose interfere with local and conducted vasodilation in the resistance vasculature mediated by EDH [15].

Strong accumulating evidence suggests oxidative stress, defined as increased formation of ROS, reactive nitrogen species (RNS), and/or decreased antioxidant potentials, as the cornerstone of ED in the development of diabetic complications [16]. This condition triggers the production of pro-inflammatory cytokines and adhesion molecules responsible of intimal lesions formation [17][18]. Indirectly, some downstream processes (e.g., insulin resistance, formation of oxidized-low density lipoprotein (ox-LDL), inhibition of AMP-protein kinase (AMPK), and adiponectin) contribute to inflammation during the progression of atherosclerosis [19]. In turn, inflammation enhances ROS production, with a consequent arise of a variety of vicious cycles which intertwine each other, thus featuring the pathogenic complexity of the diabetes-accelerated atherosclerosis [20][21]. Moreover, endothelial damage increases albuminuria, both an independent and strong marker of CV risk [22][23]. The mechanisms by which hyperglycemia induces endothelial dysfunction are summarized in Figure 1 and are described in detail in the following paragraphs. 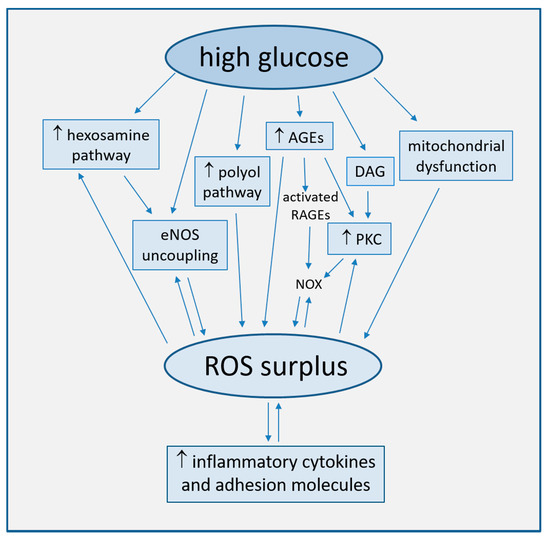 Oxidative stress plays a major role in the pathophysiology of diabetic vascular disease [19][24]. Such a role is consistent with large evidence that increased concentrations of glucose in cultured endothelial cells induce an overproduction of ROS, with the subsequent activation of intracellular signal transduction pathways leading to ED [25][26]. High glucose concentration has been well established to cause endothelial cell damage by both an overproduction of ROS in mitochondria and by multiple biochemical pathways.

The deep reduction in endothelium-dependent vasodilatation associated with T2DM can be linked to changes in eNOS phosphorylation and desensitization induced by signal transduction pathways activated by ROS surplus. As an example, oxidative stress can activate the hexosamine biosynthetic pathway under diabetic and hyperglycemic conditions. This activation is further accompanied by an increase in O-linked N-acetylglucosamine modification of eNOS and a decrease in O-linked serine phosphorylation at residue 1177 [27].

The functional disturbance of the enzyme results in the production of superoxide anion (O2−·) rather than NO, a phenomenon named eNOS uncoupling [28][29].

The ability of eNOS to generate NO can be disabled by the deficiency of tetrahydrobiopterin (BH4), an essential enzyme co-factor, which transforms eNOS into an oxidant-producing enzyme of O2−· [30][31]. ROS may induce oxidative changes of BH4 to dihydrobiopterin (BH2), a BH4 competing compound ineffective as eNOS co-factor. BH2/BH4 competition results in the dissociation of dimeric eNOS to the monomeric form, which acts through its oxygenase domain as an NADPH oxidase, further enhancing ROS generation, in a harmful perpetuation of a vicious circle [1][32][33][34]. Interestingly, the hyperglycemia-induced ED in normal subjects may be prevented by pre-treatment with the BH4 active isomer, 6R-BH4, whilst not by its inactive stereoisomer, 6S-BH4 [35]. In addition, the oral treatment with sepiapterin, a stable precursor of BH4, reduced oxidative stress and improved acetylcholine-mediated endothelium-dependent vasodilation in small mesenteric resistance arteries from db/db obese diabetic mice [36].

GTP cyclohydrolase I (GTPCH I) is the first enzyme in the BH4 biosynthetic pathway, constitutively expressed in endothelial cells and critical for the maintenance of NO synthesis [37]. Studies in HUVECs exposed to high glucose and in streptozotocin-injected diabetic mice have found that hyperglycemia may trigger BH4 deficiency by increasing 26S proteasome-mediated degradation of GTPCH I [38]. This degradation could be either prevented or improved by AMPK overexpression or activation [39].

NO derived from dimeric eNOS and O2−· from monomeric eNOS induces the formation of peroxynitrite (ONOO−·). This may facilitate the release of zinc from the zinc-thiolate cluster of eNOS, which is useful to maintain the dimeric structure of the enzyme, thus resulting in a further enhancement of eNOS uncoupling. Since loss of zinc and eNOS uncoupling activity have been both observed in ECs cells exposed to elevated glucose and in tissues of a diabetic mice model, we may hypothesize a significance of this process under in vivo conditions in diabetes [1][40].

The functions of many proteins may be affected by increased oxidant levels. As an example, a characteristic reaction of ONOO−· is the nitration of protein-bound tyrosine residues to generate 3-nitrotyrosine–positive proteins [41]. Some researchers have suggested that an increased nitration of PGI2 synthase (PGIS), more likely via dysfunctional eNOS, may characterize the diabetic disease. Such a hypothesis stands on observations that exposure of isolated bovine coronary arteries to high glucose switched angiotensin II–stimulated PGI2-dependent relaxation into a persistent vasoconstriction [42]. As well, a significant suppression of PGIS activity, along with increased O2−· and PGIS-nitration, was also observed in aortas of streptozotocin-treated diabetic mice [42].

The mitochondrial electron transport chain (ETC) is the primary source of hyperglycemia-induced ROS production via a greater oxygen use, increased redox potential and shift of O2 transport towards the respiratory chain complex II [16][20]. Other mechanisms of mitochondrial dysfunction include increased NADH/FADH2 ratio [43] and mitochondrial fission, which triggers an accumulation of fragmented mitochondria with impaired ETC activity [44].

2.1.3. Activation of the Polyol Pathway

Increased intracellular glucose levels overload ETC and are shunted into alternative pathways, in turn generating ROS. In the polyol pathway, accounting for >30% of glucose metabolism during hyperglycemia [45], glucose is converted by NADPH-dependent aldose-reductase to the sugar alcohol sorbitol, and sorbitol to fructose by sorbitol-dehydrogenase. The oxidative stress generated by these reactions depends on the consumption of NADPH, a cofactor required to regenerate the ROS scavenger glutathione (GSH), and on NAD+ reduction to NADH, which is subsequently oxidized by NADH oxidase, with consequent production of superoxide ions [46]. Aldose-reductase has been indeed implied in the increased expression of inflammatory cytokines [47][48].

In conditions of hyperglycemia, the nonenzymatic fragmentation of the glycolytic intermediate triose phosphate produces methylglyoxal, precursor of the majority of AGE products formed by a nonenzymatic reaction of either ketones or aldehydes and the amino groups of proteins, during which large amounts of ROS are generated [16].

PKC is a serine/threonine related protein kinase acting in a wide variety of biological systems and regulating cell growth and proliferation, senescence, and apoptosis. The enzyme, once activated, induces many atherogenic processes, like ROS overproduction, endothelial dysfunction, increased vascular permeability, and inhibited angiogenesis [24][56].

In particular, NOX PKC-dependent activation is considered among the major sources of high glucose-induced ROS production, even more than mitochondrion [57][58].

In either a hyperglycemic or diabetic environment, PKC is activated by oxidative stress and AGEs and by diacylglycerol (DAG), whose levels increase in endothelial cells due to the shunting of glycolytic intermediates to dihydroxyacetone phosphate [56][59]. DAG-PKC is among the several cellular pathways activating when oxidative stress causes DNA fragmentation and stimulation of the DNA repair enzyme, nuclear poly ADP ribose polymerase (PARP). This enzyme inhibits the glyceraldehyde-3-phosphate dehydrogenase (GAPDH), shunting early glycolytic intermediates into pathogenic signaling pathways, including AGE, polyol, DAG-PKC, and hexosamine pathways [16].

Endothelial cell apoptosis and senescence are pivotal processes for the development of atherosclerosis, due to their activation by a plethora of pathways sharing the common pathophysiological mechanism of oxidative stress [60][61][62].

2.3. Other Pathogenetic Mechanisms of Vascular Dysfunction

A dysregulation of microRNAs (miRNAs), small non-coding RNAs, may contribute to the progression of atherosclerosis and diabetes-induced vascular dysfunction. As an example, a reduction in miRNA-126 levels has been associated with an increased leucocyte adherence to ECs and impairment of peripheral angiogenesis in T2DM [71]. Moreover, miR-29c and miR-204 were significantly dysregulated in atherosclerotic plaques from patients with DM [72].

T2DM has been proven as characterized by an imbalance of gut microbiota, which can directly promote atherogenesis by oxidative stress, inflammation, and changes in some metabolites, even though the bacteria possibly associated with progression of diabetes-accelerated atherosclerosis have not been identified yet [20].