More research has recently focused on the role of the gut microbiota in the development or course of numerous diseases, including non-communicable diseases. As obesity remains prevalent, the question arises as to what microbial changes are associated with increased obesity prevalence and what kind of prevention and treatment approaches it could provide.

A microbiota is a complex and dynamically developing ecosystem, which is continuously changing during a lifetime. It consists of commensal, symbiotic, and pathogenic microorganisms. The microbiota has the attributes of climax moves toward homeostasis and, as much as it has been discovered, is unique for every individual. Around 30% remains a sort of “species-core”; however, the rest of the species could be subjected to both qualitative and quantitative changes influenced by various factors, either intentional or not [1][2]. Moreover, these factors could be individual-independent and associated with genetic, or environmental factors as well as with the type of birth [3][4]. On the other hand, microbiota changes could be connected with modifiable aspects, such as diet (including prebiotics and xenobiotics), or the application of probiotics. According to the research, different and the specific microbiota compositions have been found in metabolic, neurologic, and functional disorders, with more research being conducted to investigate the role of the intestine microbiome in the development of type 2 diabetes (T2DM), obesity, and metabolic disorders. Not only are these research studies focused on the quality and quantity of the intestinal microbiota and its influence on the body weight, but they also investigate the association between the diet and its influence on the microbiota composition. Additionally, the microbiota–gut–brain axis could be another possible pathway linking the intestinal microbiota with metabolism, and this bidirectional system can influence both host metabolite and appetite.

As the number of people suffering from excessive body weight increases, obesity has become one of the most prevalent diseases worldwide, regardless of sex or age. Additionally, according to the World Health Organization (WHO), the prevalence of obesity has tripled since 1975. As the WHO’s report highlighted, even though obesity is preventable and different approaches are proposed by various specialists, its prevalence is continuously increasing. The comorbidities associated with it (e.g., T2DM and cardiovascular diseases (CVD)) are the cause of millions of deaths each year. In fact, almost 40% and 13% of people above 18 years of age are overweight and obese, respectively [5], with most of the world’s population living in countries where overweight and obesity kill more people than underweight.

It remains to be found whether and to what extent the intestinal microbiota could be associated with increased obesity prevalence. It has been suggested that individuals with lower amount of gut microbial genes and lower bacterial richness have increased risk of type 2 diabetes and obesity [6][7]. Dysbiosis among patients with T2DM promotes pro-inflammatory signalling, which induces metabolic syndrome [8]. In recent years, many studies have shown that diet, particularly a high-fat diet (HFD), significantly changes the number of Bacteroidetes species and increases the number of Firmicutes and Proteobacteria species. Turnbaugh et al. were the first to discover that the contribution of Bacteroidetes is substantially smaller (around 20%) in obese mice than in lean mice (around 40%) [9]. In addition, Flessner et al. showed that implementing a high-fat and low-fibre diet is associated with decreased Bacteroidetes and increased Firmicutes. Moreover, transplantation of the microbiota from obese to germ-free mice is associated with significant adipose tissue deposition, compared with transplantation from leaner mice but with the same diet [10]. On the other hand, changing the diet from low- to high-fat is associated with a decrease of Bacteroidetes in the intestines and an increase in Firmicutes and Proteobacteria, regardless of the body weight [11]. Additionally, it has been proven that a high-protein and low-carbohydrate diet often leads to the quantitative deficiency of Bifidobacterium in the intestinal tract. It is generally known that the intestinal microbiota plays a significant role in the digestive process; however, it is unknown what composition of the intestinal microbiota protects and what type promotes the development of metabolic disorders [12]. Thus, it could be suggested that dysbiosis could be regarded as another risk factor for various diseases, including metabolic disturbances. Therefore, restoring gut composition could provide an essential value for their further treatment [13].

The gut–brain axis is a bidirectional communication system involving neural, endocrine, metabolic, and immunological signalling. The afferent path of the gut to the brain is essential for appetite control (food intake and satiety), the perception of pain, and the brain’s monitoring of the gut’s inflammatory or immunological status [14]. In return, the brain regulates gastrointestinal physiology and, by means of such elements as vagal afferents, modulates inflammatory and immunological responses [15]. It includes the central nervous system (CNS), the enteric innervation, including extrinsic fibres of the autonomous nervous system (ANS), HPA axis (hypothalamic–pituitary–adrenal axis), intrinsic neurons of the enteric nervous system (ENS), and the intestinal microbiota [16]. HPA axis regulates body processes, including digestion, and releases the corticotrophin-releasing factor, which affects intestinal inflammation, permeability, and motility [12]. The CNS and the ENS are associated with gastrointestinal tract functioning. Changes in eating behaviour in response to the CNS’s appetite control can affect the availability of nutrients for intestinal microbiota and further affect its composition. On the other hand, the intestinal microbiota can modify satiety signals by producing proteins, such as the α-melanocyte-stimulating hormone [17]. The mechanism of the brain-gut axis is depicted in Figure 1.

The integration of the microbiota into this axis (microbiota–gut–brain axis) is based on the afferent component where the microbiota can affect the brain and behaviour, and descending pathways where alterations in brain function can affect changes in the microbiota composition [18]. In fact, the microbiota–gut–brain axis could be another possible pathway linking the intestinal microbiota and metabolism. However, knowledge about the influence of the intestinal microbiota on the gut–brain axis is limited—it can affect the brain indirectly by gut-derived neuronal, immune, and neuroendocrine molecules affecting spinal and vagal afferents. On the other hand, the gut microbiota can additionally communicate with the brain directly by microbe-generated signals [13]. It is essential to notice that any perturbations, including intestinal dysbiosis, can affect the gut–brain axis manifesting in brain–gut disorders [19]. Gut microbiota-derived short-chain fatty acids (SCFAs)—indispensable for the synthesis of lipids and glucose—can influence both host metabolite and appetite; nevertheless, the likely underlying mechanisms have not been fully understood [18]. Moreover, the intestinal microbiota can induce inflammation by releasing lipopolysaccharide (LPS), namely an enterotoxin produced by an external cell membrane of cyanobacteria and Gram-negative bacteria, which induces immune cell activation and cytokine production [20][21]. Neuroendocrine signalling pathways between the intestinal microbiota and the brain are associated with microbiota-derived neuroactive metabolites, such as dopamine, gamma-aminobutyric acid, tryptophan, endocannabinoid ligands, and 5-hydroxytryptamine (serotonin precursor), which centrally and peripherally affect the host’s metabolism by the vagal stimulation, or immune neuroendocrine mechanisms [22]. Moreover, the intestinal microbiota can communicate with the enteric innervations by such means as an interaction with immune cells and enteroendocrine cells (EECs), which, through the activation of different receptors, produce hormones secreted by gastrointestinal tract hormones in response to a bacterial inducement [23]. Hormones like cholecystokinin (CCK), leptin, glucagon-like peptide 1 (GLP-1), glucagon-like peptide 2 (GLP-2), peptide YY (PYY), and ghrelin trigger the vagal and spinal nerves [24]. Furthermore, signals are integrated in the hypothalamus responsible for the regulation of energy metabolism. In this area, neurons, such as agouti-related protein (AgRP) and NPY (neuropeptide Y), increase appetite and lower energy expenditure (through melanocortin and orexin). However, neurons, such as CART (cocaine- and amphetamine-regulated transcript) and POMC (pro-opiomelanocortin), work in the opposite direction and are associated with increased energy expenditure and inhibited food intake (through the α-melanocyte-stimulating hormone) [25]. 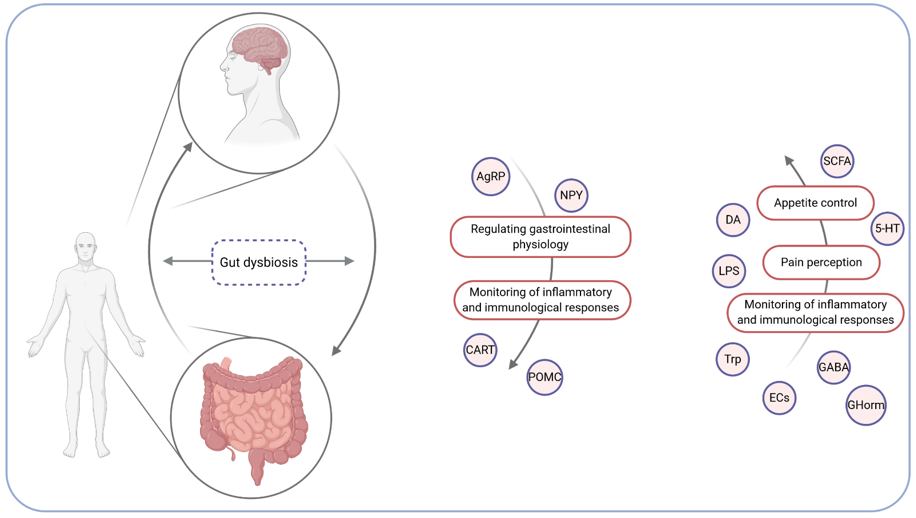