Metal oxide materials have attracted great attention from the scientific community because of their important technical applications. One-dimensional (1D) nanorods (NRs), nanowires (NWs) and nanotubes (NTs) formed from metal oxides (such as ZnO, TiO2 and WO3) enable fabrication of some specific nanodevices for optoelectronic applications, for instance, photodetectors [1][2], light-emitting diodes (LED) [3], and solar cells [3]. This is because of the large surface-area-to-volume ratio, excellent charge carrier transport performance and good crystallization ability shown by these types of nanostructures [6][7]. Thus far, heterostructure optoelectronic devices have been formed by depositing n-type metal oxides on various p-type substrates, including Si [8][9][10][11], GaN [12][13][14], NiO [15], Cu2O [16][17][18][19], graphene [20][21], boron-doped diamond (BDD) film [22][23][24][25][26][27], and organic material [28]. Among them, BDD acts as an excellent p-type conductive material for high-temperature, high-power and radiation-proof photoelectronic devices with its large band gap at room temperature (5.47 eV) and high thermal conductivity [29]. When combining 1D metal oxide with p-type diamond, one has to explore the carrier transport behavior of the formed heterojunction devices, which has both theoretical and application importance for designing new photoelectronic devices for extremely harsh environments, such as outer space or nuclear energetics industries. In recent years, p-type BDD has been used in combination with various 1D-structured metal oxides (for instance ZnO [29][30][31][32][33], WO3 [34][35][36] and TiO2 [37][38][39][40][41]) to form heterojunctions demonstrating effects of rectification and negative differential resistance (NDR), which may be widely used in various technologies. However, no comprehensive discussion focusing specifically on electrical characteristic of diamond-based p-n heterojunctions has been published.

Since the discovery of carbon NTs by Professor Iijima in 1991 [42], 1D nanomaterials have quickly become one of the hotspots in the research of nanomaterials and functional devices. Carbon NTs have excellent physical and chemical properties, such as large surface-area-to-volume ratio, high mechanical strength and brilliant thermal conductivity, as well as good chemical stability. However, the use of presently existing growth technologies does not allow a readily available effective chiral control over the synthesis of carbon NTs [43], always resulting in a compound with both metallic and semiconducting properties. As such, it is impossible to obtain a completely pure semiconductor, which greatly limits the applications of optoelectronic devices.

Because of the above limitation, researchers started with the development and investigation of other 1D semiconductor nanomaterials. Silicon (Si) is the most widely used semiconductor material for optoelectronics devices. Professor Charles Lieber of Harvard University, as the leading expert in this field, for the first time has successfully prepared Si NWs [44] and employed them in photovoltaic sub-devices, biosensors, etc. [45][46], showing the revealed nanomaterials and devices to have broad-range expectations in engineering.

However, Si NWs also demonstrate some shortcomings, such as easy oxidation to form polycrystalline or crystal defects in air, which may have a prevailing effect on the electrical transmission characteristic. Due to this fact, researchers reoriented to the development and implementation of 1D nanometer semiconducting materials with less oxidizing ability and higher stability. In 2001, the discovery of metal oxide semiconductor nanobelts pushed the study of nanomaterials forward to a new challenge. Metal oxides as the prime candidates for new functional inorganic materials are finding many promising applications in aerospace, biological engineering, semiconductor electronics, functional ceramics, and other fields. The 1D metal oxide nanosystems belong to the most prominent examined systems due to their good crystal quality, low defect density, excellent charge-carrier mobility, and fast response [47], thereby forming a promising replacement for traditional silicon-based electronic and optical devices.

The most recent studies have reported on the excellent optical–electronic performance of 1D metal oxides as well as new functional devices based on various substrate materials. Du et al. prepared a high-speed ultraviolet photoelectricity detector of ZnO-NWs Schottky barrier based on the surface-ionic-gate powered by tribo-nanometer generator [48]. Wang et al. demonstrated a novel bipolar response in self-powered ZnO NWs/Sb2Se3 heterojunction photodetector with adjustable polarity switching wavelength. As demonstrated in Figure 1, the output signal shows the change in the photocurrent polarity between shorter (405 nm–690 nm) and longer (760 nm–880 nm) wavelength regions [49]. Gao et al. have recently obtained a UV-free white LED based on high-level Fe-doped p-ZnO NWs arrays on the n-GaN substrate [12]. Peng et al. developed a real-time wearable UV-radiation monitor by exploiting the excellent properties of p-CuZnS/n-TiO2 photodetector [50]. Tang et al. proposed a feasible way to improve the hole doping in ZnO:N films with introduced beryllium and demonstrated strong near-band edge UV emission of the ZnO homojunction LED devices, which can be observed even at 400 K under continuous current injection [51]. Ye et al. improved the performance of n-ZnO NRs/p-GaN LED with the use of transparent graphene electrode. The transparent graphene electrode was used as the current diffusion layer, showing better performance compared to that in the ITO analogs [52]. The photoelectrochemical self-powered photodetectors related to ZnO/CdS NWs were manufactured by Zhang’s group [53]. The ZnO NWs were used as the carrier collection channels and UV absorbers with a well-organized structure to efficiently absorb light, whereas CdS nanoparticles were used as the visible photosensitizers. Prepared ZnO NWs/CdS structures demonstrate superfast response time and effective sensitivity to visible light and UV in the absence of power.

Figure 1. (a) Schematic view of the photodetector and (b) normalized photocurrent under illumination of light with different wavelengths [49].

Specifically, these studies provide new strategies and insights for the fabrication of high-efficiency optoelectronic devices. One may see that most of the existing 1D metal oxide heterojunctions are generally based on Si, GaN and Cu2O, etc., and such devices show excellent photoelectric performance under normal environmental conditions. However, due to the small size of nanostructures, both light and injection current will cause a significant thermal effect. Since the thermal conductivity of the listed substrates is low, it leads to the rise in the thermal noise phenomenon and fluctuation of the effective barrier height at a high temperature. With the temperature rise, an increase in the leakage current, a drift of the threshold voltage and enhanced thermal noise degree will affect the sensitivity and reliability of the device. In addition, there is a large thermal coefficient difference between the metal oxides and the Si substrate. The interface between these two materials plays an important role in the device performance: the heterogeneity at the interface will cause the effective barrier height to fluctuate with the reduced performance of a device. This phenomenon is more evident in harsh environments such as high temperature and high flux [57][58][59].

Compared with other wide band gap semiconducting substrates (NiO2, GaN, SiC, etc.), diamond has favorable intrinsic optoelectronic performance, for instance, high thermal conductivity (22 W·cm−1·K−1), high carrier mobility (2200 and 1800 cm2·V−1·s−1), high electrical breakdown field (10 MV·cm−1) and high saturation velocity (2.7 × 10−7 cm·s−1) [60][61]. Therefore, diamond is regarded as a suitable material for high power and high temperature to cooperate with metal oxide semiconductors in optoelectronic devices. So far, the main requirements include high-quality epitaxial growth as well as doping. However, because of the contradiction between structural quality and the electrical properties of p-diamond, it is still a challenge to produce high-quality p-type diamond structures. With boron doping, diamond can be transformed from an insulator into a semiconductor or even a superconductor, wherein a boron atom is in the form of a host impurity in the diamond. High-boron doping in the diamond film may enhance its electrical resistivity (up to 10−3 Ω·cm order). In order to improve the efficiency of B-doping pursuing high mobility and high crystal quality, many efforts have been implemented.

Experimentally, Li’s group obtained the BDD film synthesized by hot filament chemical vapor deposition (HFCVD) [62]. B(OCH3)3 was utilized as the boron doping source in a methane (CH4) and hydrogen (H2) reaction atmosphere with a flow rate of 0, 2, 5, 10 and 20 sccm. The resistances decrease for the B-doping diamond films grew with increasing the H2 flow rate tested by Hall-effect measurement. The undoped diamond film consists of pyramid-shaped grains. With the increase of the B-flow rate up to 2 sccm and 10 sccm, the majority of grains showed lamellar-shaped twin characteristic, on account of the renucleation induced by B-doping. As for 20 sccm, the grains showed a dominating pyramid-shaped morphology, and a twinned crystal appeared (Figure 3). Raman spectroscopy (Figure 4) is an effective technique to investigate the structure of doped diamond. It is worth noting that owing to the high content of BDD, the p-degenerated diamond peak (1332 cm−1) shows an asymmetric curve and shifts towards the lower wavelength values in the region-centered phonon bands. Moreover, two wide bands that appear at 500 cm−1 and 1200 cm−1 in the low-frequency spectrum portion are consistent with two maximum values of phonon density in the diamond state.

In the most recent study [63], a small amount of sulfur was added during the deposition of BDD films by microwave plasma chemical vapor deposition (MPCVD), as reported by Liu’s group. The results show the highest values of at once doping efficiency, growth rate, hole mobility and concentration, crystal mass and surface morphology of boron attained with the addition of sulfur (Figure 5). In the presence of an appropriate amount of sulfur, a high carrier concentration of 1.2 × 1019 at/cm3 may be obtained during the growth process when the B-C ratio is only 2.5 ppm, which denotes a high efficiency of boron doping. The regulation mechanism of sulfur addition has been considered in terms of sulfur-induced plasma changes and possible boron-sulfur complex formation. 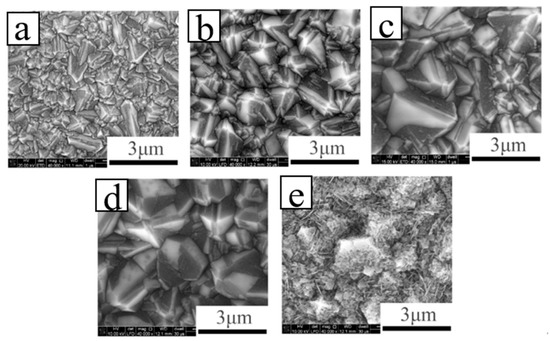