Vascular endothelial cells are a monolayer of cells that comprise the innermost layer of cells in the vascular system, including arteries, veins, and capillaries, and serve a barrier function for the blood vessels surrounding all organs and in direct contact with the blood flowing through the vascular lumen.

The glycocalyx is a complex gel-like layer of glycosylated lipid-protein mixtures that covers the surface of all living cells, and is known to serve as a physical protective layer as well as a buffer region between cells and the extracellular matrix to control various cellular functions [1]. Vascular endothelial cells are a monolayer of cells that comprise the innermost layer of cells in the vascular system, including arteries, veins, and capillaries, and serve a barrier function for the blood vessels surrounding all organs and in direct contact with the blood flowing through the vascular lumen. As shown in Figure 1, for example, the VEGLX plays an important role in regulating various vascular endothelial cell functions such as coagulation, inflammation, vasoconstriction and relaxation, vascular permeability, and angiogenesis [2][3]. 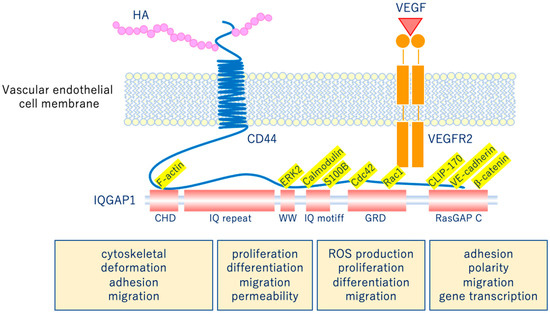 As shown in Figure 2, glycocalyx consists of sialic acid-containing glycoproteins, core proteins consisting of membrane-bound proteoglycans (syndecan, glypican, etc.), glycosaminoglycan side chains (heparan sulfate, chondroitin sulfate, etc.), and long-chain hyaluronic acid (HA) [4][5]. VEGLX is stabilized by shear stress [6] and this stabilization is crucial for nitric oxide (NO) production in vascular endothelial cells [7][8]. Although glycosaminoglycans are constantly degraded by enzymes, their levels are maintained by newly synthesized glycosaminoglycans supplied from vesicles in the golgi apparatus, regulating their homeostatic balance [9].

3. Evaluation of VEGLX In Vivo

Elevated concentrations of soluble VEGLX fragments in the blood of patients with sepsis and diabetes have been previously reported and qualitatively assessed using electron micrographic imaging of the microvascular VEGLX in animal models and autopsy cases. The endothelial glycocalyx measurement device has emerged as a simple and reproducible instrument for measuring VEGLX by monitoring the sublingual microcirculation of the VEGLX vulnerable region as an indicator of the perfusion boundary region (PBR). Evaluation of the VEGLX using GlycoCheck® (Microvascular Health Solutions, UT, USA) has been used [35]. The VEGLX is composed of a tight glycocalyx layer and a coarse glycocalyx layer. The latter allows red blood cells to bounce freely within the layer, which is observed as an increased PBR (Figure 5).

To detect VEGLX damage, PBR of the sublingual arterial microvessels is measured as a noninvasive test. Higher PBR values are thought to indicate an increase in this vulnerable area of the VEGLX and represent a thinning of the tight healthy VEGLX. In addition to reports on physiological changes in the VEGLX in healthy subjects, there have been reports on PBR related to a variety of diseases. A higher PBR was observed in elderly people, women, people with low body mass index (BMI), and patients with diastolic hypertension and diabetes [36][37][38]. In the context of racial differences, one report found no obvious racial differences between 472 Chinese and 254 Flemish residents [39], while a cross-sectional report of 6169 people found racial differences in allowing for increased PBR among blacks of African descent and whites of European descent compared to Asians and Arabs [36].

In diseases associated with complications of severe coronavirus, infections include sepsis, chronic heart failure [40], cerebrovascular disease [41], microvascular angina [42], and ischemic heart disease [41], PBR has been reported to be associated with the severity of these diseases, suggesting the usefulness of VEGLX measurements [43][44].

SARS-CoV-2, the virus responsible for COVID-19, is a positive-sense single-stranded RNA virus that is classified as a (+)ssRNA virus. The genome of positive-stranded RNA viruses also acts as mRNA and is translated into proteins in the host cell. These viruses are categorized into Group IV of the Baltimore Classification of Viruses, and are classified as dengue fever virus, and include SARS-CoV-1, MERS-CoV2, hepatitis C virus, yellow fever virus, Japanese encephalitis viruses, and rhinoviruses.

In case of viral infections, research on dengue fever and VEGLX has been reported. Dengue hemorrhagic fever/dengue shock syndrome (DHF/DSS) is characterized by microvascular barrier dysfunction and shock [45]. Dengue virus nonstructural protein 1 (NS1) has been identified as the only membrane-associated protein that anchors the viral replication complex to the vascular endothelial cell membrane. Increased blood levels of VEGLX components such as hyaluronic acid, heparin sulfate, claudin-5, and syndecan-1, suggesting shedding of the VEGLX and extravascular leakage of plasma components, have been associated with the development and exacerbation of severe dengue infection [46][47]. Such viral entry into and proliferation of vascular endothelial cells in severe viral infections is responsible for a variety of microvascular disorders, including ARDS and DIC [48][49].

The susceptibility of influenza A virus to host cell infection is defined by the density, glycosylation state, and length of the glycocalyx, which constitutes a protective barrier called mucin on the surface of the cell [50]. Dense mucin is the most important factor in the ability of influenza virus to penetrate the cell surface and inhibit binding to glycolipid receptors. The rate at which the virus fuses to the cell is found slower in a concentration-dependent manner with respect to mucin [50]. Several flu drugs target the interaction between the influenza virus and mucin-like proteins [50].