Bloodstream infections still constitute an outstanding cause of in-hospital morbidity and mortality, especially among critically ill patients. Follow up blood cultures (FUBCs) are widely recommended for proper management of Staphylococcus aureus and Candida spp infections. On the other hand, their role is still a matter of controversy as far as Gram negative bacteremias are concerned. We revised, analyzed, and commented on the literature addressing this issue, to define the clinical settings in which the application of FUBCs could better reveal its value.

Bloodstream infections (BSIs) represent a leading cause of death in industrialized countries, with an estimate of two million episodes and 250,000 deaths annually in North America and Europe, despite the availability of new potent antimicrobial therapies and advances in supportive care. In particular, hospital-acquired BSIs are a major cause of morbidity and mortality in intensive care units (ICU), and septic shock still represents the first cause of ICU total mortality [1]. This burden is likely to grow over the next few decades due to the increase in life-expectancy and in median number of patient comorbidity [2]. Unlike Gram positive (GP) BSIs, whose incidence rate has declined over the last few decades, Gram negative (GN) BSIs have markedly increased overtime and nowadays account for up to half of BSIs, with a mortality rate of 20–40% [3][4][5].

When considering GP-BSIs, international guidelines and consolidated evidence-based procedure bundles are available for the management of the leading pathogen species, Staphylococcus aureus. In this setting, follow-up blood cultures (FUBCs) are regarded as essential to document clearance of bacteremia after treatment initiation and exclude seeding [6][7][8]. On the other hand, FUBCs are mandatory in the case of Candida spp. BSIs in order to determine the end of candidemia and optimize treatment duration [9].

As for GN-BSIs, relevant advances in management strategies have been made in the last few years, such as the non-inferiority demonstration of 7 vs 14 day antibiotic courses [10] and of oral step-down vs continued parental therapy [11] in uncomplicated GN-BSIs. Recently, a combined approach of rapid diagnostic testing with a bundle of antimicrobial stewardship found a decrease in readmission rate and in cost per case [12]. Anyway, the management of GN-BSIs remains poorly codified and thus prone to personal clinician judgement, as compared to Gram positive settings. In a recently published scoping review, Fabre et al. proposed an algorithm for bacterial blood culture (BC) recommendations. They found that in bacteremias due to Enterobacterales, FUBCs are unlikely to grow unless the source of infection is endovascular or there is inadequate source control. Although with small numbers, similar results were found in Pseudomonas infections. The authors suggest clinical judgment to evaluate the need of FUBCs for GN. Of note, this review considered studies published from 1 January 2004 to 1 June 2019 [13], but the majority of studies addressing the topic of FUBCs in GN infections are actually subsequent to this time frame. At the time of writing, the role of FUBCs in Gram negative bacteremia (GNB) still represents an important matter of debate, with controversial results [14].

The early studies conducted have focused on the disadvantages of FUBCs, mainly represented by the risk of false positive results, prolonged hospitalization, inappropriate antibiotic use and increased cost [15][16].

GNB still represents an extremely relevant cause of morbidity and mortality in hospitalized patients, especially in ICU settings. Therefore, it is crucial to achieve an optimization of patient care, which, at the same time, could reduce mortality rates and meet the growing demands of antimicrobial stewardship and cost control. In this regard, the use of FUBCs in patients with GNB has represented a contentious topic in the past few years and especially in the very last period.

Indeed, unnecessary FUBCs may cause patient discomfort and carry the risk of false positive results. According to previous reports, as many as 90% of all BCs grow no organisms and of the approximate 10% that do grow organisms, almost half are considered contaminants (false positives) [27]. Thus, given a constant rate of contamination, performing more FUBCs may result in a higher chance of encountering contaminant organisms, and consequently, in increased costs and patients discomfort, longer hospital stays, unnecessary consultations, and inappropriate antimicrobial therapy. Of note, this reasoning includes an inherent fallacy. Although theoretically acceptable in cases of GP yield, the growth of GN bacteria in BCs should always be regarded as relevant and never, or just anecdotally, be considered as a contamination [28].

On the other side, performing FUBCs may have a relevant impact on patient management and outcome, reducing mortality rates. When FUBCs are performed in more severe patients with comorbidities and without adequate infection source control, in cases of bacteremia due to multidrug resistant (MDR) GNs and without an appropriate empiric therapy, the positive or negative results may guide the clinician to the correct decision about type and duration of antibiotic therapy [22][23].

Not surprisingly, the evidence concerning the usefulness of FUBCs underwent a progressive shift in the last few years, going from a restrictive to a selective approach. Taking a look at Table 1, it appears that papers with a higher rate of FUBCs performed, more frequently found no evidence of benefit in contrast to those that applied FUBCs more selectively. In fact, Kang et al. [18] and Jung et al. [24] performed FUBCs in GNB in 81% and 86% of the cases, respectively, as compared to Maskarinec and Giannella that used this tool only in 68% and 17% of cases, respectively. Likely, Spaziante et al. [26] found a high rate of PB by only performing FUBCs in high-risk ICU patients with GNB. Furthermore, the inclusion in the analysis of a mixed GP and GN population was also associated with pessimistic results. Therefore, it seems that the more refined the selection of patients in which to draw FUBCs, the more evident the benefits they bring. Indeed, the results of our literature review show that, while in some subgroups of patients the use of FUBCs may not translate into a clear benefit, it is possible to identify several situations where the application of this tool may steer the clinical decision making in the correct way. Thus, selection is a sticking point in this topic.

For the purposes of performing rational FUBCs, physicians well trained in infectious diseases should be available in all settings where risk factors for positive FUBCs are present. For this reason, ICU patients might be evaluated from dedicated infectious disease consultants in order to avoid unnecessary BCs [26]. The study written by Ceccarelli et al. shows an example of this management [29]. In fact, they reported some cases of GN-related septic thrombosis (ST) with indolent clinical course and long-term positive BCs despite adequate antibiotic treatment as one possible exception to the restricted use of FUBCs. In these cases, FUBCs allowed the determination of the correct treatment duration, representing a tool of critical importance for patient management [29]. The same group of authors further stressed this concept in a case series of 13 critical care patients with ST caused by GN bacilli (Figure 1): this disease was characterized by PB despite prompt source control and appropriate antibiotic treatment, an indolent clinical course and, even more important, a rapid defervescence with normalization of procalcitonin (PCT) values preceding bacteremia clearance. This phenomenon was interpreted as a mechanism of immune tolerance [30]. 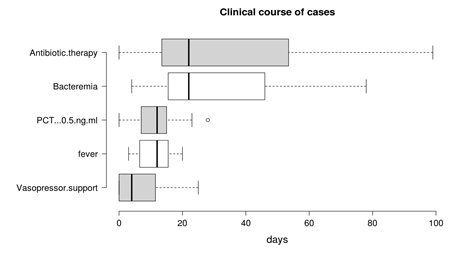 Figure 1. Duration of bacteremia and clinical course features of Gram negative septic thrombosis in critically ill patients, modified from Spaziante et al. This figure shows that bacteremia may persist despite clinical improvement (fever disappearance, negative procalcitonin (PCT) values and no vasopressor support); under these circumstances, FUBCs may remain the only driver of antibiotic therapy.

Based on the fascinating hypothesis that FUBCs in BSIs due to GNs could be part of clinical practice, we tried to investigate which conditions make FUBCs either necessary or unfounded. Figures 2 and 3 show clinical and microbiological risk factors for PB, respectively. Rows and columns of each figure intersect in a colored square and every color means a risk threshold of PB, from green (FUBCs highly recommended), light green (moderate recommendation), yellow (weak recommendation) to red (avoid FUBCs), of various combinations of all risk factors recognized in this review.

In order to point out the right setting where FUBCs should be prescribed (otherwise when they are not warranted), we created Figures 2 and 3 analyzing the risk factors for persistent bacteremia found in the revised articles. On the other hand, we identified settings where FUBCs are moderate or even weakly recommended based on risk factors cited by less authors/articles and our judgment. For these reasons, a clinical decision on a case-by-case basis is needed to judge when to perform FUBCs.

In general, FUBCs should be always considered in critically ill patients because they frequently present multiple risk factors that may account for resistant or persistent GNB: intravascular catheter, antibiotic resistant pathogen or an occult source of infection that requires control. As an example, FUBCs are warranted in patients with an endovascular source of GNB that represents the single most important indication to this procedure, even in some instances where a biomarker of active infection, such as PCT, is decreased to negative values. In fact, Spaziante et al. stressed this point by analyzing Gram negative ST where positive FUBCs played a crucial role in patient outcomes (Figure 1). Along the same line, the presence of a non-eradicable infection source appears to be a condition in which FUBCs should be performed, especially in patients that require ICU, with persistent fever or as a moderate recommendation (light green) in individuals afflicted with ESRD on hemodialysis [23][24][25]. FUBCs might also be indicated in persistently febrile patients with primary bacteremia, long term intravascular catheter or urinary tract infection, to a lower degree of evidence. Additionally, we suggest that even in some instances of a lower positivity rate of FUBCs, a clinical decision might be reached in cases of light green and yellow squares both in Figures 2 and 3. For this reason, in the case of patients without a clear clinical indication to perform FUBCs as shown in Figure 2, they should be checked for microbiological risk factors, as shown in Figure 3. To this end, in our opinion, FUBCs might be performed even in instances of microbiological risk factors alone. In fact, taking clinically stable patients with UTI as an example (yellow to red squares in Figure 2), instances where the column of MDR microorganisms’ etiology and the row of ineffective therapy intersect in a green square might represent a recommendation to perform FUBCs [21][24][25].

A possible limitation of Figures 2 and 3 is that the definitions of risk factors are often different between studies or even not provided at all. For instance, the dosage and duration of corticosteroid treatment with a significant immunosuppressive effect are not clearly defined in the literature as they are considered to depend on the characteristics of the patient and underlying disease [31].

Finally, progressive acquisition of resistance during antimicrobial therapy through the selection of a hidden resistant subpopulation (named hetero-resistance) is a growing concern in the case of persistent bacteremia [32]. Future studies should elucidate the possible role of FUBCs in early detection and management of this increasingly appreciated mechanism of resistance. 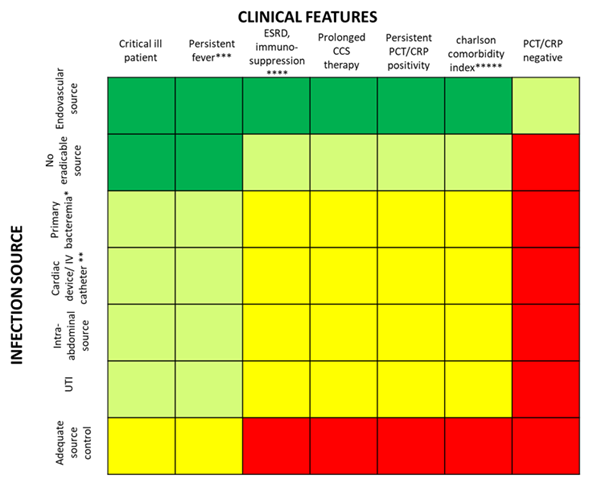 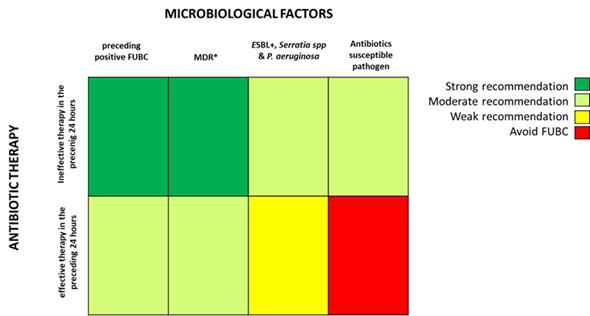