Ga doped ZnO (GZO) thin films were deposited on glass substrates at room temperature by continuous composition spread (CCS) method. CCS is thin films growth method of various GaxZn1−xO(GZO) thin film compositions on a substrate, and evaluating critical properties as a function position, which is directly related to material composition. Various compositions of Ga doped ZnO deposited at room temperature were explored to find excellent electrical and optical properties. Optimized GZO thin films with a low resistivity of 1.46 × 10−3 Ω cm and an average transmittance above 90% in the 550 nm wavelength region were able to be formed at an Ar pressure of 2.66 Pa and a room temperature. Also, optimized composition of the GZO thin film which had the lowest resistivity and high transmittance was found at 0.8 wt.% Ga2O3 doped in ZnO. 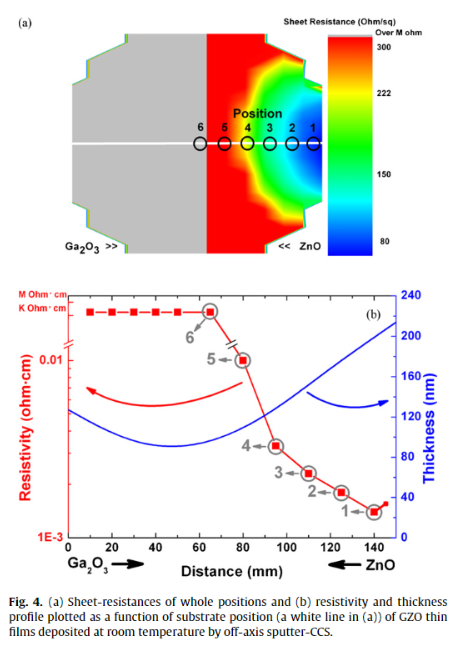 Fig. 4(a) shows the sheet resistance map of GZO thin films deposited at room temperature by off-axis sputter-CCS. Each point of the sheet-resistance map had a different value horizontally because of their different GaxZn1−xO compositions. Especially, CCS thin films deposited near ZnO target had lower sheet resistance than thin films deposited near Ga2O3 target because the Ga2O3 has insulating properties. So, we focused on the GZO thin films of distance from 80 to 150 mm. We indicated a horizontal line (white line) that relates to electrical properties plotted as a function of substrate position in Fig. 4(b) and Table 1. Although there were a lot of data of GZO-CCS thin films, we show some data briefly because it is easy to understand a trend of GZO-CCS thin films. As shown in Fig. 3(b), the resistivity of positions from 10 to 80 mm (Ga2O3 rich region) was higher than 1.0 × 10−2 Ω cm or overloaded. However, the resistivity of positions from 80 to 140 mm was decreased as a decrease of Ga concentration. However, the resistivity of the distance at 145 mm was increased again. This result can be attributed to doping concentrations of Ga2O3 in ZnO region which means ZnO rich region doped with Ga2O3 appropriately at positions from 80 to 140 mm. At the position of 140 mm which corresponds to 0.8 wt.% Ga2O3 doped in ZnO, the lowest values for the resistivity (1.46 × 10−3 Ω cm), carrier concentration (2.7 × 1020 cm−3) and Hall mobility (1.9 cm2/V s) were obtained. These values are comparable to the resistivity (1.9 × 10−3 Ω cm), carrier concentration (1.2 × 1021 cm−3) and Hall mobility (0.35 cm2/V s), which is electrical properties of ZnO thin films doped with 5 wt.% Ga2O3 deposited at room temperature reported by Lee et al. [15].