Effect of Ultraviolet on Solution Process of Silicon Thin Film

Cyclopentasilane, which has a chemical shift at 3.7 ppm as revealed by H NMR, was used as a precursor for solution-processed Si films after photopolymerization. X-ray photoelectron spectroscopy revealed a Si 2p peak at 99.68 eV, showing a binding energy shift of about 0.3 eV due to a decrease in hydrogen content resulting from UV exposure. Meanwhile, Raman shifts maintained their demonstration of the amorphous Si phase of the films. Based on these results, we confirm the modification of the amorphous Si structure due to UV exposure on polysilane solution during solution process. 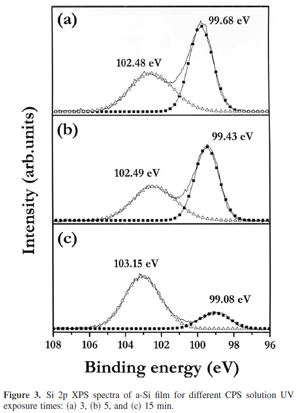 In Fig. 3a, the neutral Si peak at 99.68 eV shows that the stoichiometry of polysilane still remained after 3 min UV exposure. After 5 min UV exposure, the polysilane in the solution almost lost one hydrogen atom for each Si atom, and after 15 min UV exposure, all the hydrogen atoms evaporated. The Si 2p peak of the a-Si film obtained from the solution with 15 min UV exposure was located at 99.08 eV, which corresponds to Si in the surroundings of Si. After the breakages of the Si–Si and Si–H bonds, some Si atoms combined with each other, resulting in a polysilane chain. The others made bonds with no atoms, becoming Si radicals. The oxidized Si 2p peak gives information on the unsaturated bonds of Si or the radicals generation in polysilane solution. The oxygen atoms bonded to Si atoms may have originated from the ambient where oxygen concentration was maintained below 10 ppm. Because the processing temperature was held under 350°C, the Si films would oxidize by a combination of oxygen atoms and Si radicals rather than by thermal oxidation. The Si 2p peak at 102.48 eV in Fig. 3a verifies the generation of a high density of unsaturated surface states by UV exposure, which corresponds to the Si2O3 suboxide. The Si film obtained by 15 min UV exposure has fully oxidized Si (SiO2) with an electron binding energy of 103.15 eV, which coincides with the breakages of Si–H and Si–Si bonds in CPS solution into reactive radicals were more dominant than Si–Si coupling with a large UV exposure time.