Polyhydroxyalkanoates (PHAs) are a family of microbial polyesters which comprise of a large family of thermoplastic polymers. They are produced by a variety of prokaryotic microorganisms under unbalanced nutrition conditions as carbon and energy storage materials.

Polymer material usage continues to expand relentlessly, with the global plastic demand almost doubling since 2000 and outpacing all other bulk materials, such as steel, aluminium, or cement. The broader plastics and related commodity production from petrochemical feed stocks drives up to 12% of global oil demands. Non-renewable resource depletion and subsequent greenhouse gas emissions combined with the absence of adequate technologies for post-use circularity and inappropriate disposal of these non-biodegradable materials is leading directly to our perilous environmental situation. Alternative biodegradable and environmentally sustainable biopolymers such as Polyhydroxyalkanoates polyhydroxyalkanoate (PHA) and its homopolymer, polyhydroxybutyrate (PHB), hold the potential to replace plastics linear use and dispose practices with a fully circular life-cycle for plastics.

Mechanically, PHB materials are typically stiff and brittle in nature, with low thermal stability and a high degree of crystallinity. Many PHB plastics have properties that are similar to the petroleum polymers polypropylene (PP) and polyethylene (PE). Feedstocks for PHB biopolymer production include renewable and sustainable sources such as food waste. These factors, combined with its biocompatibility and predisposition to biodegradation on exposure to designated active biological environments make PHB a leading candidate as an alternative to synthetic polymers such as PP and PE. Since its discovery in the 1920s [1], PHB has been extensively studied by microbiologists, as carbon and energy storage products within metabolic pathways of various bacterial strains. It has also been studied by polymer scientists and engineers as the material that exhibits unique characteristics, a number of which are superior to corresponding synthetic polymers. However, several limitations currently exist when PHB is produced at industrial scale capacities. The high costs of production, low yield, susceptibility to degradation, technology complexities including extraction difficulties, are among the challenges facing PHB production [2]. In order to reduce the costs of production and achieve economic viability in competition with the current low petroleum plastics manufacturing costs, a series of new emerging bacterial fermentation processes are being evaluated [3], which have the potentially to accentuate the kinetics of microbial growth and PHB accumulation to the levels necessary for profitable process engineering and production serving the plastics value chain stakeholders.

Materials within the PHA family can differ significantly in their chemical structure. The general structure of the repeating unit of PHA is represent here in Figure 1, where n can be greater than zero and provides the number of repeating units in the polymer chain and R represents a functional group in the structure, varying on the type of PHA. 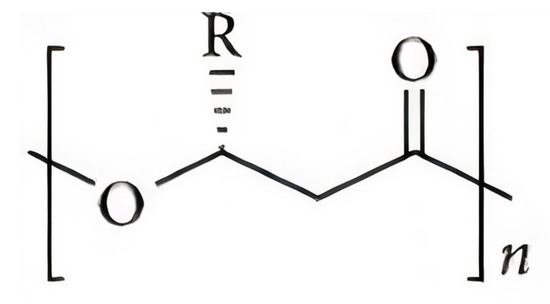 The monomer units of PHA can be classified into two groups based on the number of carbon atoms: short-chain and medium-chain length PHAs. The length of the monomer unit plays a critical role in the resulting polymer properties and therefore, prior knowledge of the monomer chemical structure is required to target specific properties of the material for a number of different applications. Short-chain length PHAs (scl-PHA) comprises of 3–5 carbon atoms. Some examples of the monomeric units for scl-PHAs include: 3-hydroxybutyrate (3HB), 4-hydroxybutyrate (4HB), or 3-hydroxyvalerate (3HV). The scl-PHA materials have thermoplastic properties similar to that of polypropylene [5]. As PHB contains a methyl group in its chemical structure, it is the most prominent representative of the scl-PHA group. However, mcl-PHB materials are also possible, with studies reporting that Pseudomonas isolates LDC-5 and LDC-25 are capable of producing mcl-PHB material [6]. mcl-PHA consist of 6–14 carbon atoms, which could include some of the following monomeric units: 3-hydroxyhexanoate (HHx), 3-hydroxydecanoate (HD), or even longer-chain comonomer units [7]. As mcl-PHAs have a higher carbon chain length, they show a reduced crystallinity and increased flexibility that resemble elastomers and latex-like properties. They also have a low glass transition temperature and lower molecular mass when compared to scl-PHAs [8]. A recent study revealed that the presence of over 30% long chain comonomer units in mcl-PHAs could increase the melting temperature and the degree of crystallinity, resulting in a significant change in mcl-PHA mechanical properties and also differentiating them from the typical mcl-PHA material [7]. There is also a difference in the purity levels between the two classes. An example is in the case of solvent extraction using acetone, where the scl-PHA purity and recovery is much higher than that for mcl-PHA materials. The purity of scl-PHA is reported to be around 98.4% and recovery of 96.7%, while the purity of mcl-PHA ranges between 80% and 90% and the recovery rates range between 60% and 80% [9]. In order to produce an overall superior PHB material, a number of studies have been conducted aiming to improve the mechanical behavior and reduce the high costs associated with the material production. Some of these approaches are based on the use of blends, the addition of functional groups, copolymer developments and chemical modifications of the material [10][11][12][13][14]. Functionalization of PHA copolymers showed important improvement in the properties and appears to be a very good approach in increasing the applications of PHA materials. A recent example is shown by Bhatia et al., where poly-(3-hydroxybutyrate-co-3-hydroxyvalerate) (PHBV), functionalized with ascorbic acid, resulted in a lower degree of crystallinity (9.96%), higher thermal degradation temperature (294.97 °C) and hydrophilicity (showing contact angle of 68°) and 1.6 fold increase in biodegradability when compared to the un-functionalized PHBV copolymer [14].