The three-dimensional printing of scaffolds is an interesting alternative to the traditional techniques of periodontal regeneration. This technique uses computer assisted design and manufacturing after CT scan. After 3D modelling, individualized scaffolds are printed by extrusion, selective laser sintering, stereolithography, or powder bed inkjet printing. These scaffolds can be made of one or several materials such as natural polymers, synthetic polymers, or bioceramics.

The goal of periodontal therapy is the regeneration of the entire periodontal complex in order to recreate its original architecture and function. This involves bone formation, cement formation on the dental root and the attachment of periodontal fibers between the root surface and the alveolar bone.

Conventional periodontal treatments, surgical or non-surgical, do not allow a complete periodontal regeneration. They can only obtain a partial localized regeneration in the apical part of the bone defect. Non-functional conjunctive fibers form on the rest of the defect creating a junctional epithelium [1].

The healing patterns after a periodontal treatment can be either a regeneration or repair. Concerning the periodontal repair, the migration of epithelial cells in the apical direction will form the long epithelium junction. This long epithelium junctional should be considered a natural event in the healing of the attachment system. It is a restoration of soft tissue continuity. It involves new tissue formation but the architecture and function are not fully restored. A periodontal reattach is therefore formed, which is a simple reunion of gum tissue with the root surfaces following surgical or traumatic separation. Periodontal regeneration is a process considered complex because it requires the entanglement and synchronization of different tissue types; the soft tissues (Sharpey’s fibers and connective tissue) and hard tissues (alveolar bone and cementum) [2]. Several cell types are involved like fibroblasts for the periodontal ligament, cementoblasts to reform the cement and osteoblasts for bone [3]. Tissue regeneration therefore depends on the availability of these necessary cells, the presence of signals capable of controlling their behavior, mechanical tensions and the extracellular matrix (ECM).

2. Applications of Tissue Engineering and 3D Printing for Periodontal Regeneration

The most widely used approach uses the principle of GTR. The concept of GTR is based on the fact that periodontal tissues have different biological growth speed. The proliferation speed of epithelial cells is higher than bone cells thus causing the filling of the available space by the non-mineralized epithelial and connective tissue. The establishment of barrier membranes promotes selective cell repopulation of the periodontal defect by preventing the proliferation of epithelial cells in favor of the bone and periodontal ligament cells [4].

The use of bioactive molecules and growth factors, such as amelogenins, fibroblast growth factors (bFGF, FGF-2), platelet-derived growth factors (PDGF), platelet-rich plasma (PRP), Bone Morphogenetic Proteins (BMP) have also been used. These molecules regulate the migration, differentiation, proliferation of periodontal and mesenchymal stem cells, as well as their chemotaxis and the production of cell-specific extracellular matrix [5][6].

However, the results concerning the use of barrier membranes and growth factors remain unpredictable, and periodontal regeneration is incomplete [7]. The major limitation remains the inability to exercise space-temporal control over the healing process. Recently, tissue engineering techniques have been developed to overcome this limitation [2].

The basic concept of periodontal tissue engineering is to combine a scaffold with living cells and/or biologically active molecules to form a “Tissue Engineered Construct” (TEC). This scaffold, with an adequate blood supply, will promote tissue regeneration [2][8].

Cell sheets are a recent technology using temperature-sensitive cell culture dishes that reversibly respond to temperature changes [11]. Periodontal ligament cells cultivated using this technique have a promising regenerative potential after transplantation into different animal models [12][13][14][15][16]. One of the main problems with the use of cell sheets is the difficulty in achieving biomechanical fixation.

Thus, the use of a scaffold can provide mechanical support for the periodontal cell sheets and it could also create and maintain the space necessary for bone formation in the periodontal defect. The use of scaffold would override many of the limitations of current clinical practice. They will have the ability to guide and coordinate the healing process. These scaffolds can have one or several compartments and be used alone or in combination with bioactive molecules, medicines, and gene therapy and/or cell delivery ([17][18][19][20][21][22][23][24][25][26][27][28][29][30][31][32][33], Figure 1). 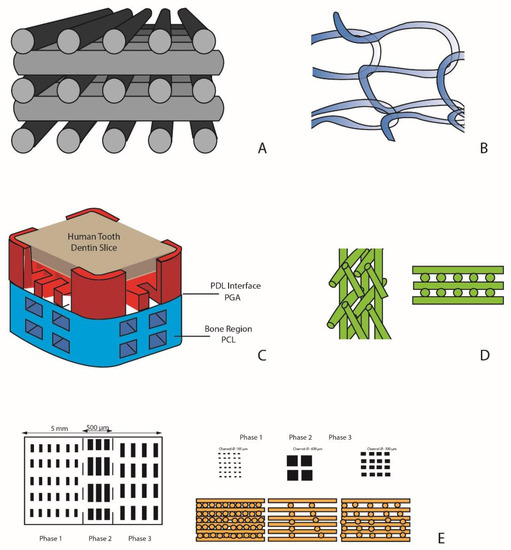 The first scaffolds to be designed have only one compartment. They meet the requirements of guided tissue regeneration: wound stabilization, selective cell repopulation, while allowing spatio-temporal control of the periodontal healing process. They can be loaded with cells or growth factors to enhance and promote bone and/or ligament formation.

The Osteoflux, developed by Carrel et al. [21], is a block of laminated strands of biphasic ceramic (α-TCP + HA) printed in 3D by extrusion. It is composed of orthogonal layers of cylindrical filaments. This scaffold was implanted in sheep calvaria and compared to bovine bone (Bio-oss) and β-TCP particles to assess vertical bone regeneration. Particulate materials and the 3D block differ in two ways. First, the particulate aspect prevents large volume reconstructions. The use of 3D printed blocks allows both horizontal and vertical augmentation, while the simple use of granules allows only horizontal augmentation. Second, when using particles, the practitioner has no control over the arrangement of pores and inter-particle channels; it is random. This lack of structural organization can limit osteoconduction. One of the advantages of 3D blocks is their structure of linear pores controllable in size and permeability over the entire length of the block. Such a structural organization can promote the progression of the mineralization front with its vascular system. Indeed, 3D printing techniques by extrusion allow to the creation of a controlled and reproducible architecture with 60% of total porosity, channels of 250 µm in diameter with an inter pore distance between 150 and 500 µm thus promoting osteoconduction. The authors were thus able to observe a significant increase in bone growth during the first two months; then at 4 months, there was no significant difference between the materials.

Another type of monophasic scaffold was manufactured by extrusion, by Mangano et al. [18]. It was composed by 30% HA, 60% β-TCP and 10% α-TCP. It has a characteristic mesh-like structure with rod diameters of 300 ± 30 μm, and pore sizes between the rods of about 370 ± 25 μm. Its macroporosity is 60%. This scaffold was implanted in a sheep sinus. At 45 days, the authors observed good immuno-tolerance of the scaffold, as well as complete tissue integration, and bone remodeling located at the periphery. At 90 days, they observed the formation of a mineralized lamellar bone at the periphery. In the center, a highly vascularized fibrous tissue formed, showing some fibroblasts and a large vascular network comprising capillaries and large vessels with great structural organization. Beyond 90 days, the scaffold continued its gradual resorption. However, it was not entirely replaced by the newly formed bone tissue (formation of fibrous tissue in certain areas).

This technique increases the healing potential by seeding different cell types in the structure. This approach is well documented in the literature. The cells are encapsulated in hydrogels or seeded directly in the scaffolds, which are then implanted in bone defects. Thus, in addition to their role of space maintainer, TECs allow the diffusion of cells in the periodontal defect. While the concept may seem relatively simple, its implementation has led to variable results depending on the biomaterials and the types of cells used.

Baba et al. [20] created by electrospinning a poly-L-lactic acid mesh associated with Bone Marrow-derived Mesenchymal Stem Cells with PRP. In a phase 1 and 2 clinical trial, these scaffolds were implanted in human periodontal defects. They were able to observe a gain in clinical attachment, bone growth and a reduction in pocket depth.

Cell-based periodontal therapies have considerable regulatory limitations related to cell source, collection and culture. However, the development of advanced scaffolds made of synthetic biomaterials loaded with drugs and/or growth factors makes it possible to find interesting clinical alternatives without a cellular component.

2.2.3. Monophasic Scaffolds for the Release of Growth Factors

For the delivery of growth factors, synthetic polymers are used with a delayed degradation profile and improved mechanical properties. The direct incorporation of biological elements into the structure of the scaffold is complicated by the high temperature manufacturing process as well as the use of strong organic solvents resulting in the denaturation of these biological elements.

The development of microspheres as vectors has made it possible to overcome these limitations and are now widely used in tissue engineering and in particular in periodontal regeneration.

Cho et al. [22] designed a PCL scaffold printed by extrusion, loaded with PLGA microspheres containing BMP-2, BMP-7 and connective tissue growth factor. This scaffold was implanted in vitro on the root surface of human teeth. The incorporation of the microspheres in the TEC radically modifies the release profile of the encapsulated molecules which then reaches a release of 50% after 42 days. Only BMP-7 induces the formation of a cementoid tissue deposit. However, the delayed release of growth factors induces cementogenesis in a later phase which could compromise the insertion of periodontal ligament fibers on the root surface.

Kim et al. [17] designed a scaffold of PCL + HA printed by extrusion, associated with a mixture of SDF1 and BMP-7. It is a scaffold in the form of a rat molar and a rat incisor with interconnecting micro channels of 200 µm in diameter infused in a mixture of SFD1 and BMP7 (100 ng/mL each) associated with a type 1 collagen solution. At 9 weeks, regeneration of the periodontal ligament is observed as well as a new bone formation at the level of the interface with the scaffold in the form of a rat incisor. The use of SDF1 (stromal cell-derived factor 1) and BMP7 made it possible to significantly recruit more endogenous cells, such as mesenchymal and endothelial stem cells, and to increase angiogenesis compared to the control scaffold without growth factor. Indeed, SDF1 and BMP7 makes it possible to recruit several cell lines. SDF1 has a chemotactic effect on stem cells from bone marrow and endothelial cells, all of which are necessary for angiogenesis. SDF1 binds with chemokine CXCR4, a receptor for these two cell types. BMP7 plays a major role in osteoblastic differentiation, and thus in the mineralization of the alveolar bone. This study once again highlights the value of cell recruitment. This technique would allow easier implementation in clinical practice than cell seeding. In addition, this type of technique has a much lower financial cost.

Carrel et al. [21] associated 100 μg of BMP-2 with Osteoflux and the scaffold was implanted in a sheep. The rate of vertical bone growth, bone maturation and bioresorption of the material almost doubled after implantation in sheep. The resorption rate is well adapted which gives the bone enough time to grow and mature until it acquires its structure. In parallel, the biomaterial was absorbed via cell and chemical mediated processes.

The use of biphasic scaffolds has therefore facilitated alveolar and periodontal ligament regeneration. However, the deposit of a newly formed cement remains complicated. It depends on the implantation of differentiated cells in vitro or on the ability of endogenous cells to promote cemental apposition on the root surface. Therefore, recent studies have begun to address the incorporation of a third compartment in order to actively promote cementogenesis.

The use of a three-phase scaffold for periodontal regeneration is relatively recent and remains largely unexplored because the clinical implementation of this approach is difficult. The complexity of periodontal regeneration lies in its spatial–temporal coordination and the difficulty of reproducing it. The main challenge lies in the formation and integration of a cementum layer on the root dentin surface.