Zinc is an important micronutrient and is required for cell proliferation, differentiation, growth, and development. It takes part in the maintenance of homeostasis, DNA synthesis, RNA transcription, cell division, and activation. It is also involved in immune responses, oxidative stress, apoptosis, and aging. Its deficiency was found to increase the levels of lipid peroxidation in the mitochondrial and microsomal membrane and the osmotic fragility of the erythrocyte membrane.

In the human body, zinc is required for the proper function and wellbeing of the organism, and it varies in accordance with dietary habits, geographic localization, and climate. Moreover, the presence of any stress conditions including trauma, parasitic infestations, and infections may affect patients’ need for zinc intake. Diet and supplements are the main sources of zinc intake and account for approximately 90–95% of its intake. The general recommended daily dietary intake of Zn is estimated to be 15 mg/day [1]. However, as acute and/or chronic zinc poisoning may occur, levels of zinc should be controlled within a suitable range [2].

Due to the unique properties of zinc, its use may give therapeutic benefits in the treatment of diseases, in which a concurrent zinc deficiency can complicate the clinical features. It can affect in an adverse manner a patient’s immunological status, as well as cause an increase in oxidation stress and/or generation of inflammatory cytokines [3]. Both oxidative stress and chronic inflammation may increase the risk or cause the development of many chronic diseases (e.g., atherosclerosis, malignancies, neurological disorders, and autoimmune diseases) [4]. Zinc is necessary for major body processes such as blood clotting, proper thyroid function, cognitive function, bone mineralization, the functioning of the immune system, prostaglandin production, and wound healing [3].

Changes in zinc concentration can influence both adaptive and innate immunity, affecting the immune system’s mechanism of anticancer activity. It is important to assess the status of zinc in patients and correct zinc deficiency, since its properties may cause a significant impact on the effects of the therapy. Depleted levels of zinc have been associated with a reduction in monocyte adhesion to the endothelium, granulocyte chemotaxis, and macrophage phagocytosis. Lower zinc levels were also shown to decrease the cytotoxicity and activity of natural killer cells. Zinc depletion can also reduce the activity of cytokines secreted by T cells and macrophages, as well as T-cell differentiation [5]. Recent studies have shown that zinc could either protect against or cause cell apoptosis depending on its concentration. Moreover, the effect of exogenous zinc on the life and death of cells depends on the of intracellular levels of zinc present in the human body [6][7].

ZIP (zinc importers), ZNT (zinc transporters), and zinc-sequestering metallothioneins (MT) are proteins that maintain intracellular zinc homeostasis. Their roles in zinc homeostasis are described in Figure 1. The homeostasis is tightly regulated and controlled by changes in zinc influx and outflux across cell membranes. As zinc particles cannot freely cross cellular membranes, they use specific zinc-permeable channels and transporters, of which ZNT and ZIP proteins are the most important [8]. The family of plasma membrane-localized zinc transporters (ZIP transporters, also called solute carrier 39A (SLC39A)) consists of 14 subtypes (ZIP1–14). They facilitate the influx of zinc into the cytosol either from extracellular fluid or from intracellular vesicles [9][10][11][12]. 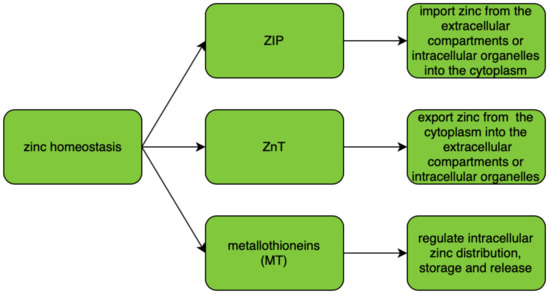 Intracellular zinc transport is mostly performed using ZNT transporters (also called SLC30A), which distribute zinc in the cytosol and cellular organelles. The ZNT family consists of 10 subtypes (ZNT1–10) of zinc transporters which lower intracellular zinc levels by mediating its efflux from the cell or influx into intracellular vesicles [10][12]. Malfunction of zinc transporters may result in zinc deficiency. There is increasing evidence that any dysregulation of and/or mutations in ZIP and ZNT transporter genes may cause functional disorders including diabetes and cancer [13]. A correlation between levels of expression of zinc transporters and their dysregulation or malfunction was found in various tumor types, suggesting that any change in the intracellular concentration of zinc and its homeostasis can contribute to the severity of the malignancy [14][15][16][17]. In various cancers, altered expression levels or abnormal activity of Zn transporters were noted; however, no specific mutations or variants of ZNT or ZIP were associated with a specific type of malignancy [8].

Both ZIP and ZNT transporters can be either tissue-specific or universally expressed in the body tissues depending on the subtype of the transporter [18]. Cellular zinc importers (ZIP) have been widely investigated and discovered to be upregulated in many patients presenting with different tumor types. This may be the reason why zinc concentration is increased in most tumor types. ZIP1, ZIP2, and ZIP3 have been found to be downregulated in the malignant cells of patients with prostate cancer [19]. Overexpression of ZIP4 was linked to increased cell proliferation of patients with pancreatic, prostate, lung, and ovarian cancer [8][14]. In patients with breast cancer, the expression of ZIP6 and ZIP10 was linked with metastasis to lymph nodes [20][21. Increased levels of ZIP7 were correlated with increased tumor growth and invasion in tamoxifen-resistant breast cancer [22][23][24].

Zinc-binding proteins such as metallothioneins (MTs) are intracellular metal-binding proteins. They are present in all living organisms that mediate metal homeostasis. They also play an important role in protection against heavy metal toxicity, DNA damage, and oxidative stress. They are small cysteine-rich proteins.

There are four types of metallothioneins (MT-1, MT-2, MT-3, MT-4) that are encoded by the genes located on chromosome 16q13 [26]. MT-1 and MT-2 are the isoforms of metallothioneins which participate in zinc metabolism and its homeostasis. Zinc and copper are physiological inducers of metallothioneins [27]. Metallothioneins have an important role in the zinc effect on the immune system and are protective against stress and increase in aging [28]. Metallothioneins are crucial to the proper functioning of natural killer cells; their polymorphism can impair innate immunity [29]. An increased expression of MT isoforms has been demonstrated in some of the tumor cells.

The biological functions of metallothioneins are related to their high affinity for heavy metals; they can control cellular homeostasis of zinc and copper, essential for processes of cell proliferation, differentiation, and antioxidation. Moreover, they can act as antioxidants in order to protect cells against free radicals and mutagenic oxidative stress, antineoplastic drugs, and radiation [30][31]. MTs were found to play protective roles against DNA damage and apoptosis. Moreover, they were found to have important roles in cancerogenesis and cancer therapy as they participate in tumor growth, progression, metastasis, and drug resistance [26]. Metallothioneins can also bind other trace metals including copper, cadmium, mercury, and platinum.

Metallothioneins also influence the activity of Zn-dependent proteins including Cu/Zn superoxide dismutase (SOD), zinc finger proteins, transcription factors, and other proapoptotic proteins [32][33]. They were also found to take part in the processes required for angiogenesis. Multiple in vivo studies have reported an increased expression of MT-1 and MT-2 isoforms in tumor-associated angiogenesis; MTs may increase the synthesis and expression of fibroblast growth factors (FGFs), as well as other factors including transforming growth factor (TGF-β) and vascular endothelial growth factor (VEGF), resulting in the stimulation of tumor growth and better vascular supply [34].

Oxidative stress is an important factor that contributes to the pathogenesis of chronic diseases, mutagenesis, cancerogenesis, atherosclerosis, vascular diseases, neurodegeneration, immunologic diseases, and aging processes. The role of zinc in cancerogenesis is mainly associated with its antioxidant properties, thanks to which it can potentially inhibit tumor growth. The intracellular redox potential system is a crucial element that ensures the maintenance of cellular homeostasis and regulation of various metabolic cell functions [35]. Under homeostasis, reactive oxygen species (ROS) act as mediators and regulate multiple cellular processes; they also induce cell differentiation, signaling, and apoptosis, as well as the release of nitric oxide (NO) and glucose transport. The role of the antioxidant system is to protect against the excessive concentration of ROS and their potential toxicity-related effects. The system consists of enzymatic proteins including superoxide dismutase (SOD1, SOD2), catalase (CAT), glutathione peroxidase (GPx), glutathione reductase (GR), peroxiredoxin (PRX), and nonenzymatic proteins, vitamins, and metal ions. Any alteration in the level of ROS can disturb the biological functions of the DNA, as well as other proteins and lipids, resulting in a permanent change in their structure and abnormalities in cellular metabolism.

One of the components of superoxide dismutase, which catalyzes the dismutation of superoxide radicals to hydrogen peroxide, is zinc. SOD is present in the human body as three isoenzymes. A reduction in its activity can cause oxidative stress and lead to neuron death, cancerogenesis, and/or tumor progression [36][37].

Zinc is a constituent of various metabolic enzymes, transcription factors, and cellular signaling proteins [28]. It is also the main structural component of zinc finger proteins (Zfp) and is required for their stability and stabilization. Zfp is the largest and most diverse group of nucleic acid-binding proteins, which play various important roles in the transcriptional regulation of cellular metabolic network. Zinc finger proteins are also responsible for the interaction with zinc-binding domains including zinc fingers, RING fingers, and LIM domains [38][39][40][41][42]. There are eight types of zinc fingers, which differ by their quaternary structure and the location of the amino acids which contain zinc molecules. Proteins containing zinc fingers (ZFs) have a selective ability to bind to DNA, RNA, and other proteins. Zinc finger transcription factors may directly influence tumor formation via the epithelial–mesenchymal transition [29].

Zinc finger domains are the major determinants of regulatory networks and processes as they are present in almost half of human transcription factors. Some ZFs have been demonstrated to mediate transcriptional repression through various interactions with chromatin-remodeling factors. As changes in chromatin were observed in cancers, ZFs may be of particular interest to be investigated in cancers [43][44]. Munro et al. [45] analyzed the somatic mutations found in Cys2His2 zinc finger domains. They found that two of the functionally important specific positions within the zinc finger domains were mutated in patients with uterine corpus endometrial carcinoma, colon and rectal adenocarcinomas, and skin cutaneous melanoma.

A20 is one of the zinc-finger-transactivating proteins. It inhibits tumor necrosis factor (TNF)-α-induced NF-κB (nuclear factor kappa B) activation. Using this protein, zinc can inhibit NF-κB activation, which leads to a decrease in the generation of multiple inflammatory cytokines and adhesion molecules [46].

Matrix metalloproteinases play important roles in tumor invasion, infiltration, metastasis, and tumor angiogenesis [48][49]. They were found to be upregulated in most cancer types, and their expression was often associated with poor patient survival. Several MMPs were found to be expressed by the cancer cells (e.g., MMP-7); however, others were synthesized by the tumor stromal cells (e.g., MMP-2, MMP-9) [47].

Zinc has been found to have a role in oncogenesis. Its levels are directly affected by the cells present in the cancer microenvironment, including pro-inflammatory mast cells, which release high levels of zinc into the surrounding tissues [50]. The presence of mast cells in the tumor environment is thought to worsen patient prognosis. Moreover, their presence can cause changes in extracellular zinc levels and affect cellular response [29]. Many cytokines and growth factors including interleukin (IL)-6, hepatocyte growth factor, epidermal growth factor, and TNF-α are produced in the tumor microenvironment and affect the expression of multiple zinc transporters [51].

Improper dietary habits and imbalanced nutrition can cause dietary deficiency of many important micronutrients. It is estimated that approximately two billion people do not absorb an adequate amount of zinc from the diet and are at risk for deficiency of this trace metal. On the basis of epidemiological studies, an increased risk for cancer development has been established in cases of dietary zinc deficiency [52][53]. Taking into consideration the antioxidant properties of zinc, it is possible that its dietary deficiency can result in oxidative stress and molecular changes, thus increasing the risk of malignancy [54]. In a study by Lee et al. [55], it was demonstrated that the intake of dietary zinc was associated with a decreased risk of colon cancer. To our best knowledge, there were no studies assessing the impact of dietary supplementation of zinc and copper and the risk of gynecological malignancies. However, it should be noted that zinc supplementation during anticancer treatment, especially during chemotherapy, may be harmful and should be taken with special precaution under the doctors’ supervision. Supplements may interfere with the chemotherapeutic agents used as a part of the treatment [56].